Ethiopia’s democratic transition has been wobbling for months. But now a civil war in the northern region of Tigray threatens to derail it all together. On 4 November, the federal government launched military operations against the Tigray People’s Liberation Front (TPLF), which governs the area. Air raids and clashes have been reported across the region, though details remain scant, with communication networks down. The government says TPLF forces sparked the war by attacking a federal army base, though Tigrayan officials refute the claim. Once the dominant force in Ethiopian politics, the TPLF has lost influence since Nobel Peace Prize winner Abiy Ahmed took charge in 2018. Some members have been purged from government or arrested for corruption and human rights abuses. Tensions boiled over in September, when Tigray held regional elections that Addis Ababa had earlier postponed on account of the coronavirus pandemic. On 6 November, Abiy said military operations would have limited objectives – but many fear a drawn-out conflict with dangerous ramifications for the wider Horn of Africa region.

Since hitting Nicaragua’s Caribbean coast on 3-4 November, sending tens of thousands of people into shelters and prompting local leaders to criticise a lack of basic supplies – such as water and COVID-19 protection equipment – powerful Hurricane Eta is now estimated to have displaced 300,000 people throughout a large swathe of Central America. Red alerts were called in Nicaragua, Costa Rica, and Honduras, while landslides killed at least 50 people in Guatemala. The UN’s emergency aid coordination body, OCHA, said the situation was a “developing crisis that was still far from over”. Eta is the strongest hurricane to hit the region since Mitch, which claimed at least 11,000 lives in 1998. While fatalities have so far been far lower, precipitation from Eta is expected to be just as heavy as from Mitch and the risk from flooding and landslides persists.

Staying on the storm topic, La Niña is set to supercharge disaster risks in the coming months, the UN’s meteorological organisation, WMO, warns, following a global declaration of La Niña conditions that could stretch through the first quarter of 2021. The phenomenon typically brings cooler temperatures – a counterpart to El Niño’s warming – but the effects vary across the globe. Afghanistan could see hotter and drier weather, for example, while parts of East Africa may face low rains during planting season. The WMO says the biggest anomalies could be in the Horn of Africa and Central Asia, which will see below normal rains; and Southeast Asia and parts of the Pacific Islands, which could see heavier rains. Analysts say La Niña could raise global agriculture prices – a particular worry given COVID-19 has already worsened food insecurity in many crisis areas.

After polls marred by sporadic violence that displaced thousands, a post-election crisis is now brewing in Côte d'Ivoire. On 2 November, the country’s electoral commission announced that Alassane Ouattara had won a controversial third term in a landslide. In response, the two main opposition politicians who boycotted the polls formed a breakaway transitional administration, which the government called “an act of sedition”. Both rivals – who view Ouattara’s third term as illegal – are now under house arrest. The crisis has revived memories of a brief civil war that followed disputed polls in 2010. Around 3,000 people were killed back then as rebels supporting Ouattara, the internationally recognised winner, clashed with forces loyal to the incumbent, Laurent Gbagbo, who refused to stand down. Pro-Ouattara rebel commanders were subsequently integrated into the army, but on 4 November their former leader, Guillaume Soro – who was barred from running in last week’s polls – called for a mutiny in support of the opposition. Though Soro's influence over the ex-rebels has waned in recent years, violence of some kind seems likely in the days ahead.

Search and rescue operations have come to a close following last weekend’s 7.0-magnitude earthquake in the Aegean Sea, with the death toll standing at 116 as of 6 November. All but two of the deaths were in Turkey’s western coastal city of Izmir, where more than 1,000 people were also injured. Two people were also killed on the Greek island of Samos. Dozens of buildings collapsed on both sides of the sea, with many more severely damaged, and people who cannot return to their homes are staying in tents in Izmir. Turkey sits on several fault lines and has a history of deadly earthquakes, including one in January that killed 45 people in Elazig province. At the time, Turkey said it was “seriously” prepping for the possibility that Istanbul, a city of 15 million, could be hit with a massive quake. Read more here on early warning systems, urban planning, and how preparing in advance can make a difference for those impacted by disasters.

AFGHANISTAN: Gunmen killed at least 35 people in a 2 November attack at Kabul University, underscoring Afghanistan’s instability even as Taliban and government negotiators continue peace talks. The attack, claimed by a faction of so-called Islamic State, follows an October suicide bombing at a school in a mostly Shia Kabul neighbourhood.

ALGERIA-NIGER: Deportations of sub-Saharan migrants from Algeria to Niger have soared in recent weeks with security forces pushing back at least 6,747 people, often violently, across Algeria’s southern border. The uptick follows an announcement by Algeria’s Ministry of Interior of an operation to combat irregular migration. Algeria has expelled around 25,000 migrants to Niger each of the past two years, adding to migration pressures in the country.

ASIA TYPHOONS: Scientists will try to gauge climate change’s role in extreme rains that have inundated central Vietnam for weeks, the Red Cross said. Five major storms have struck the country since mid-October – including Typhoon Goni, which weakened to a tropical depression before making landfall on 6 November, worsening severe floods and landslides. Earlier, the storm caused devastation in parts of the Philippines. Another storm, Atsani, currently troubling the northern Philippines and Taiwan, could also veer toward central Vietnam in days, though its path has been extremely erratic.

LIBYA: Nearly 1,000 asylum seekers and migrants were intercepted by the EU-backed Libyan Coast Guard this week, bringing the total number of people forcibly returned to Libya to more than 10,000 so far this year. Most people returned to Libya end up in detention centres with poor conditions and rampant abuse, and thousands have disappeared off the official radar this year into facilities where extortion and trafficking are rife.

MOZAMBIQUE: At least 38 people died when a boat carrying people fleeing extremist violence in the northern province of Cabo Delgado sank last week. The UN’s migration agency said more than 13,000 displaced people have chartered vessels to the provincial capital of Pemba in the last three weeks alone, while over 400,000 are now displaced overall.

NAGORNO-KARABAKH: A woman and two of her grandchildren were killed on 6 November when Azerbaijani rockets and missiles struck Stepanakert, the de facto capital of the disputed territory of Nagorno-Karabakh. At least 150 civilians have been killed in six weeks of conflict between Armenia and Azerbaijan over the enclave. More than 100,000 people have been forced from their homes. For more, read our briefing on the humanitarian fallout.

SYRIA: Eight civilians, including four children, were reportedly killed by shelling on 4 November in Syria’s northwestern Idlib province, where an escalation in violence has prompted concerns that a ceasefire in the rebel-held region may be unravelling. A March deal brought a halt to a Russia-backed offensive by the government of Bashar al-Assad, which was marked by heavy bombing and forced more than a million people into flight. 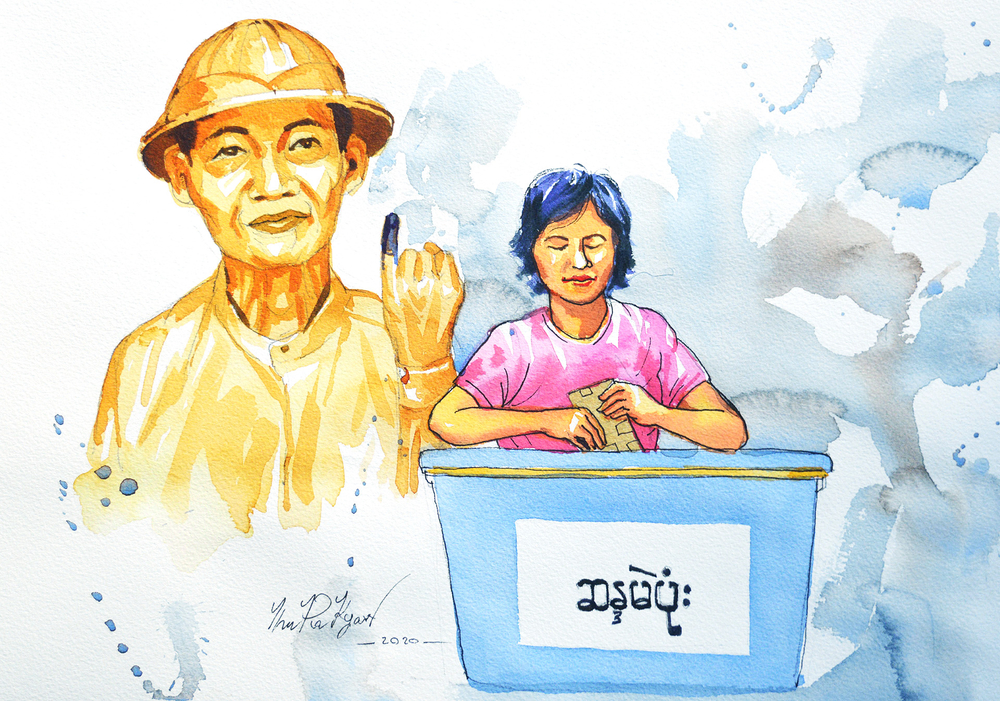 Given events in the United States, voter suppression may be top of mind. But in Burkina Faso and Myanmar, it happens in vastly different ways. In Burkina Faso, where presidential and parliamentary elections are set to be held later this month, the presence of extremist groups has disrupted voter registration and could impact access to polls for many would-be voters, especially in rural areas. But are Burkinabe politicians also taking advantage of the insecurity and gaming the system to seek electoral gains? Meanwhile, in Myanmar, the government has cancelled voting for 73 percent of voters in Rakhine State, citing rising insecurity caused by the escalating civil war. What effects does such disenfranchisement have on the quest for peace, and is joining the armed struggle for political autonomy more likely to yield real change? Find out more about the elections you should also be watching:

Humanitarianism: The making of...

Listen to episode two of the Rethinking Humanitarianism podcast!

If aid were a superhero, what would its origin story sound like? Which problems was it initially set up to solve, and how are they different from the problems today? The answers to these questions should help us understand why efforts at reform have fallen short in the past.

Join hosts Heba Aly, director of The New Humanitarian, and Jeremy Konyndyk, senior policy fellow at the Center for Global Development, as they take you back to the early days of aid, with guests:

Rethinking Humanitarianism is a new 10-part podcast series from The New Humanitarian and the Center for Global Development.

Search for "The New Humanitarian” in your preferred podcast app (available on Spotify, Apple, Stitcher, Google, Youtube) to listen to the teaser and subscribe to make sure you never miss an episode. We’re including listener feedback on the episodes. If you’ve got something on your mind, shoot us a voice note at this email address.