Côte d'Ivoire’s Alassane Ouattara is set to run for a controversial third presidential term on Saturday amid an opposition boycott and fears of post-election violence following a series of deadly clashes around the country between supporters of rival parties.

Ouattara, who became president in 2011 and is popular among international donors, had previously ruled out standing for re-election, but reversed course in August after the sudden death from natural causes of the man he had primed to replace him.

The opposition also questions the impartiality of the Ivoirien election commission and constitutional council, which validated Ouattara’s third term bid while rejecting 40 out of 44 rival applicants, including some of the president’s main challengers.

With tensions mounting ahead of the poll, at least 16 people were killed last week in inter-communal violence in southern Côte d'Ivoire, while several anti-Ouattara protesters have also been killed in clashes with security forces in recent weeks.

“There is a strong fear that after [the vote], the situation will deteriorate further,” said Drissa Traoré, an Ivoirien lawyer and secretary general of the Paris-based International Federation for Human Rights (FIDH).

The unrest has revived memories of the brief but bloody civil war that followed disputed polls in 2010. Around 3,000 people were killed and up to one million displaced as rebels backing Ouattara, the internationally recognised winner, clashed with forces loyal to the incumbent, Laurent Gbagbo.

Rights groups documented atrocities by both sides during that war, which deepened divisions between the country’s marginalised and mainly Muslim north, where Ouattara is from, and the largely Christian south, where Gbagbo drew a lot of his support.

Ouattara has since overseen a period of strong economic growth in the world’s biggest cocoa producer. Large amounts of public money have been invested in new roads and other infrastructure projects.

But critics say the boom has not translated into much social reconciliation between communities, while prosecutions for crimes committed during the previous conflict have focused largely on Gbagbo’s camp, fuelling a perception of victor’s justice.

“The divisions remain,” said Sylvain N'Guessan, a political analyst in Côte d'Ivoire’s economic capital, Abidjan. “The transitional justice process that started has not achieved all of its objectives.”

Despite the recent violence, the security situation in Côte d'Ivoire has improved markedly since the 2010 polls, which took place while the country was still divided between a rebel-held north and government-controlled south – the product of an earlier civil war that broke out in 2002.

Back then, politicians including Gbagbo regularly sowed division between southerners they considered indigenous and northerners like Ouattara – held as a foreigner and previously barred from running for office amid claims his parents weren’t fully Ivoirien. 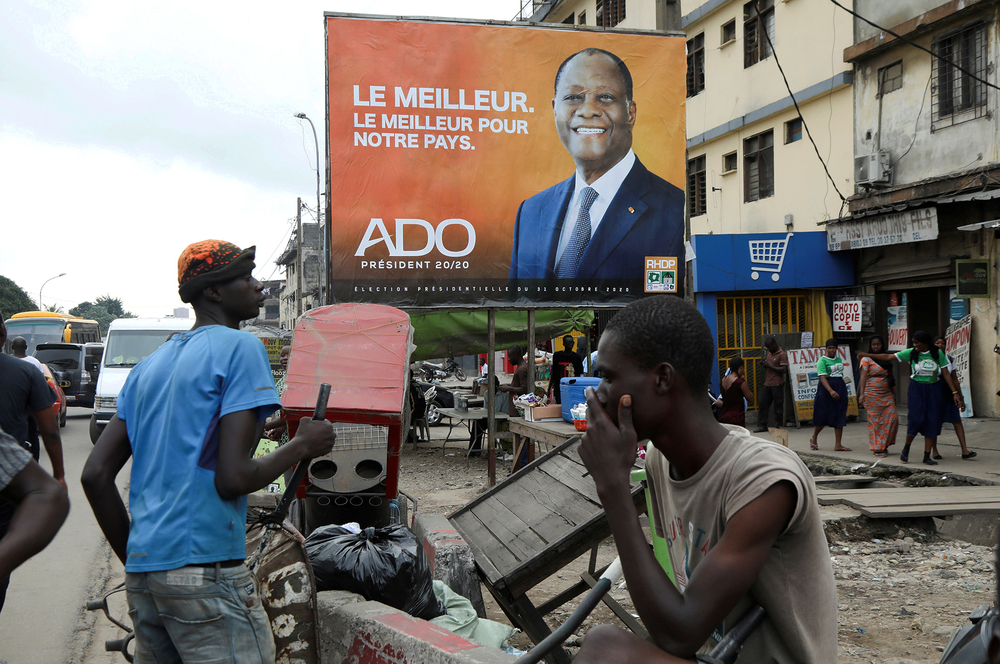 Luc Gnago/REUTERS
A campaign billboard featuring President Alassane Ouattara, whose decision to stand for a controversial third term has sparked protests and inter-communal clashes around the country.

Today’s Côte d'Ivoire is reunified, while tens of thousands of northern rebels who helped Ouattara defeat Gbagbo have been demobilised or integrated into the army. Nationalist rhetoric has been dialled down in the current campaign, though not entirely expunged.

But analysts told The New Humanitarian that little has been done to reform an ultra-competitive political culture that has seen the same cast of characters contest every election since the country’s transition to multi-party democracy in the 1990s.

Among the familiar faces excluded from running this week is Gbagbo, who was sentenced by an Ivoirien court to 20 years in prison last November for looting central bank funds during the 2010 crisis.

The former president was recently acquitted of war crimes by the International Criminal Court after several years in custody, though he is currently living in Brussels awaiting the outcome of an appeal against the decision.

Guillaume Soro, a former Ouattara ally who led the northern rebels that unseated Gbagbo, has also been disqualified. He too received a prison term in absentia for embezzlement and money laundering, charges many consider to be politically motivated.

“Community tensions remain because lasting solutions to the Ivoirien socio-political crisis have not been found.”

With the two main opposition leaders who have been permitted to stand – another former president, Henri Konan Bédié, and Pascal N’Guessan, who leads a wing of Gbagbo’s Ivoirien Popular Front – calling for a boycott, Ouattara is now certain to win, said Fahiraman Rodrigue Koné, an Ivoirien sociologist and researcher.

Koné said clashes are likely to break out in various parts of the country during and after the vote. “Where the opposition has its electoral bases, there will necessarily be tensions with Ouattara's supporters,” he said. “Violence will inevitably appear.”

As well as protests and strikes, many expect the violence will take on an ethnic dimension – pitting northern communities who normally vote for Ouattara against southern, eastern, and western groups associated with the opposition.

Clashes of this kind have already been reported in August in the central town of Daoukro, a stronghold of Bédié, and more recently in Bongouanou, an N'Guessan base, and in Dabou, 50 kilometres west of Abidjan.

“Political parties have the bulk of their supporters coming from the same ethnic groups as the leaders,” said Traoré, of FIDH. “When these parties are opposed, the situation exacerbates community tensions.”

N'Guessan, the political analyst, said the recent inter-communal violence demonstrates that long-standing ethnic and social divisions in Côte d'Ivoire have not been adequately addressed.

With Ouattara in power, many Ivoiriens from Gbagbo’s base in the west of the country have felt excluded from government jobs and an associated system of patronage that they say benefits northern ethnic groups.

“Community tensions remain because lasting solutions to the Ivoirien socio-political crisis have not been found,” N'Guessan said.

Since 2011, the government has launched various community dialogue and social cohesion initiatives, including a truth and reconciliation commission that interviewed tens of thousands of Ivoiriens affected by conflict.

But a final report sat gathering dust for almost two years before it was made public by the government, while some passages critical of Ouattara and his government were removed.

Legal proceedings against perpetrators of human rights violations were also lopsided, added Kone. “Only those close to the old regime faced punitive justice,” he said. “Even if efforts have been made in terms of amnesty, return of refugees, and compensation [for victims], the desire for revenge and to do battle with those considered as enemies remains real.”

In Abidjan, where deadly clashes took place 10 years ago, some residents have reportedly been stocking up on essentials or leaving on buses bound for safer rural areas as they anticipate violence after Saturday’s vote.

Traoré, the lawyer, expressed hopes that Ouattara and opposition leaders might come together for a last-minute dialogue. But with the polls fast approaching, he conceded: “Nothing suggests such a possibility”.