The Democratic Republic of Congo’s deadliest ever Ebola outbreak was officially declared over on Thursday, but aid groups have warned that flare-ups are still possible, and that a new outbreak in the northwest is testing the capacity of responders.

The announcement, from Congo’s health minister, comes 42 days after the last patient was discharged from a treatment centre in the conflict-affected eastern outbreak zone of Beni, meaning the three-week incubation period during which transmission between people normally occurs has long since passed.

Attention now switches to the northwestern outbreak in largely peaceful Équateur province, where 24 cases have been reported and 13 people have died since it was announced on 1 June.

Responders told The New Humanitarian there is a shortage of vaccines, drug therapies, and dedicated facilitates for handling Ebola patients, despite an earlier outbreak of the disease in the province infecting 54 people – 33 of whom died – in 2018.

Response workers also cautioned that surveillance of possible cases will need to be maintained in the east, in case any of that outbreak’s more than 1,000 survivors pass on the virus again, either by relapsing or by infecting others through their body fluids.

Officials had hoped to call time on the eastern outbreak – which has cost more than 2,200 lives over a nearly two-year period – in early April, but a new cluster of cases emerged just days before the announcement was due. One of those infected ran away from a treatment centre in April and has still not been found.

The eastern outbreak – Congo’s tenth and the world’s second worst on record – was concentrated in a conflict-torn part of the country, and was marred by distrust between local communities and responders that led to hundreds of attacks on treatment centres, medical staff, and patients.

A months-long investigation by TNH showed how questionable practices in the response effort – including payments to security forces, renting vehicles at inflated prices, and job kickback schemes – may have jeopardised humanitarian operations and put lives at risk.

The first deaths in Équateur are believed to have occurred between 18-30 May.

Several cases have been reported in Mbandaka, the main city in the province and a trading hub of roughly 1.2 million people that has river connections to the densely populated capital, Kinshasa, and neighbouring countries.

Unlike in Beni, there is no armed conflict in Équateur, and the 2018 outbreak was brought under control in less than three months. Health workers and local residents are also better trained to detect and test cases, and to raise community awareness. 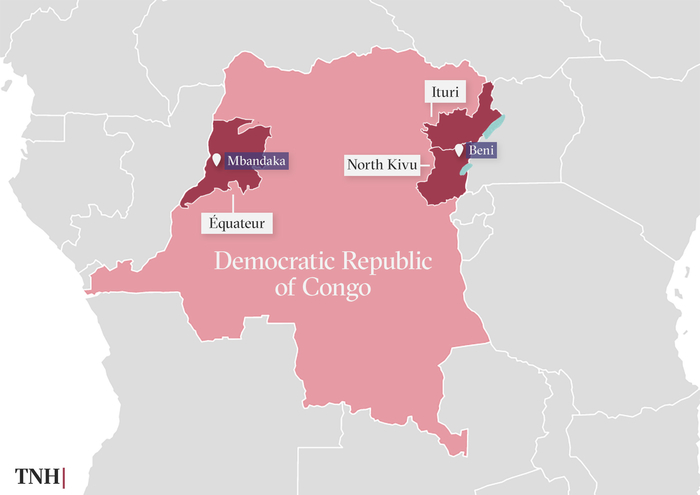 A new vaccine – first rolled out in Équateur in 2018 and then deployed in the east – has already been used to inoculate frontline health workers in recent weeks as well as 5,000 contacts of infected people, and the contacts of those contacts.

Equipment – including sanitation supplies, personal protective gear, and laboratory machines – has been transported to the province from the east, as have health responders.

But officials said the response to the new outbreak – led by the Ministry of Health – still poses challenges, especially as the confirmed cases have been distributed across an area spanning hundreds of kilometres and with poor road conditions.

Transporting samples for testing from Bolomba health zone – where cases have been reported – has proved particularly challenging as the town is hundreds of kilometres from Mbandaka and the nearest laboratory.

Ebola treatment centres were not operational at the outset of the outbreak, Muhayangabo told TNH, because the ones erected in 2018 were dismantled. Patients have also died without access to drug therapies because protocols guiding their use have not been initiated and cold chains – to keep the vaccine at low temperature over long distances – are still being set up.

Efforts to vaccinate the population have, meanwhile, been hindered because of a limited stockpile following the end of vaccination campaigns in the east, and challenges shipping the existing supply west due to COVID-19 travel restrictions, Muhayangabo added.

The UN said aid organisations are “intensifying” community outreach efforts, but they have faced resistance from some local residents, particularly in Mbandaka, where police officers opened fire on demonstrators protesting against response efforts last week.

Several local government officials and nine community members who spoke to TNH all said parts of the population believe the government has fabricated the outbreak to profit from response funds – echoing a view held by many in the east.

“The only common thing [between the two outbreaks] that we have seen is the resistance of the population,” Abdou Dieng, the UN’s emergency Ebola response coordinator in Congo, told TNH.

“Partner presence has drastically reduced and now health authorities are left on their own.”

In eastern Congo, surveillance efforts are set to continue in the coming months, but treatment centres are expected to close, while budgetary constraints, COVID-19 restrictions, and the new outbreak in Équateur mean only a skeleton force of responders are left in the region.

“Partner presence has drastically reduced and now health authorities are left on their own,” said Muhayangabo. “I am very concerned with the disengagement [should] people need to respond to another outbreak.”

As response efforts ramp up in Équateur, Alex Wade, head of mission for Médecins Sans Frontières in Congo, said mistakes made over the past two years in the east should not be repeated.

“[Responders] need to work on reinforcing the existing system, as opposed to creating a parallel, vertical system which packs up… and doesn’t leave anything behind,” Wade said.

The UN’s Dieng added: “One of the lessons that we have learned is that we really need to work on community resistance. We shouldn’t wait until there is a disease or a crisis to talk to the population.”