MBANDAKA, The Democratic Republic of Congo

As fish-seller Josephine Ikoko prepares to board a barge from Mbandaka to Kinshasa, the capital of the Democratic Republic of Congo, she is painfully aware of the heightened risk of catching Ebola, which has already reached the outskirts of this city of one million people.

“My family in Kin (Kinshasa) told me to be very, very careful on this trip. I really wished we could be screened so that we know we are 100 percent sure that we are Ebola-free. I’m going to look at everyone who got here with suspicion,” she says.

Properly screening the entire Congo River and all its tributaries is a practical impossibility – thousands of ports and informal embarkation points dot the 600 kilometres south to Kinshasa, the 500 kilometres north to Bangui (the capital of the Central African Republic), and the various routes westward into neighbouring Congo-Brazzaville. But people here are afraid and some accuse the government and the international medical authorities of putting out mixed messages.

The first news of the outbreak, in rural Bikoro, reached the World Health Organisation, which is now leading the response with the Congolese government, on 8 May. Its spread to Mbandaka, confirmed on 17 May, greatly increased fears of a wider epidemic, and was described by the WHO as a “major game-changer”.

Because of Mbandaka’s location on the river and its road and air links, the confirmation of Ebola cases there “increases the risk both of local propagation and further spread within the Democratic Republic of the Congo and to neighbouring countries,” according to the government’s strategic response plan.

As of 29 May, some 35 people were confirmed to have been infected with Ebola in three locations in northwestern Équateur Province, 12 of whom have died. Four infections, including three fatalities, were in Mbandaka’s Wangata District.

For now, authorities seem to believe the outbreak is contained in Équateur Province, but fears remain that it could hitch a ride up or down the largely unmonitored Congo River and become a major epidemic.

“All it takes is one sick person to travel down the Congo River and we can have outbreaks seeded in many different locations... that can happen at any moment, it’s very hard to predict,” Peter Salama, the WHO’s head of emergency response, told Reuters news agency last week.

Bonne Année Etombi Sanga, the principal of Le Chandelier School, located next to one of Mbandaka’s ports, said the proximity to the river had spurred him to take preventative action to protect the children.

“We thought we should organise ourselves to create awareness about the disease,” Sanga said. “We are deeply worried. As a result, we handed out Ebola pamphlets to the kids and teachers, and we have set up hand-washing buckets so that anyone entering or going out of the school could wash his hands properly. We are being very vigilant.”

The Ebola virus is passed from person to person via direct contact with the blood or other bodily fluids of infected people who are in the late stages of infection. It takes between two and 20 days from infection for the first symptoms, such as a fever, to show.

Mbandaka is now teeming with experts, health ministry personnel, and aid workers trying to contain the outbreak by administering vaccinations, detecting new infections, tracing people who have come into contact with infected people, and raising awareness among healthcare workers and the general population.

At a news conference in Geneva on 29 May, Salama explained that every Ebola case had an average of 100 contacts targeted for vaccination and that identifying all of them was a complex task.

“No one is coming along with a list [saying] ‘here are my contacts that I’ve met with in the last couple of weeks’. This is very much epidemiological detective work, finding out which contact is important, then tracing the contacts of the contacts, following them through time and through place until we construct a whole epidemiological narrative around that case,” he said.

The WHO expects to have a digitalised database of all contacts in the outbreak areas up and running by the end of this week.

It is also working with Congolese authorities to set up a “measured screening process” in key ports and other exit and entry points in the province.

But whereas passengers at Mbandaka’s airport all have their temperature checked on arrival and departure, no such screening is taking place at the several ports around the city IRIN visited.

According to the International Organization for Migration, another UN agency involved in the response, ports on the Congo River “do not meet international standards for boarding and disembarking, and the lack of effective surveillance could lead to Ebola cases being found in Kinshasa.”

Marie, another passenger waiting to board a barge in Mbandaka, complained of double standards: “If they are screening people at airports, why don’t they screen us at ports? Oh, okay, plane passengers are rich and VIPs, and we, poor people on the boats and barges, count for nothing.” 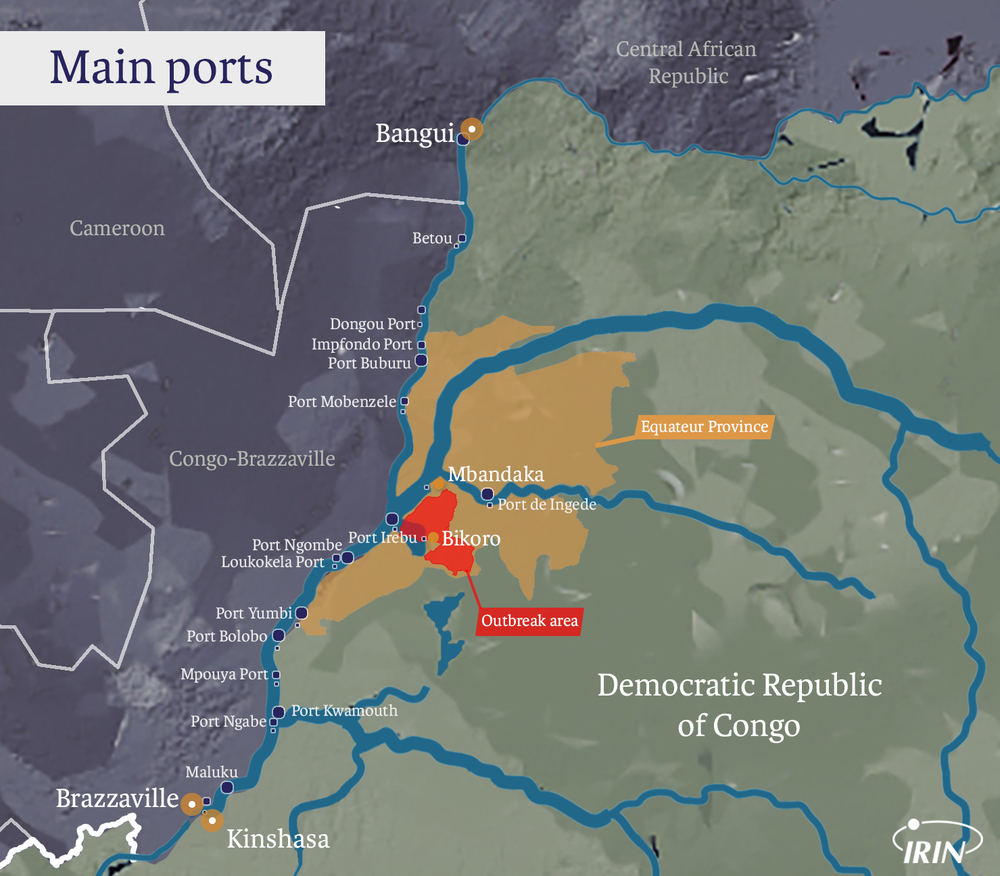 “All it takes is one sick person to travel down the Congo River..."

“Now, a joint IOM/WHO team is going up and down the river looking at where the best and most strategic points are to do such screening,” he said, noting there are “literally hundreds of ports along the river.”

He said it was important not to unnecessarily restrict the movement of people and goods when tackling an outbreak, especially because “the vast majority of people who are travelling in Congo and may have a fever will not have Ebola. They’ll have malaria or something else.”

But Thomas, a boat owner in Mbandaka preparing to sail to Lukolela, a town about 175 kilometres downstream, said he too was worried by the lack of controls on the river. “Time is flying and the virus is getting near our homes and families,” he said. “Anyone among these people going in and out of these ports could be infected. What are they waiting for? This disease scares me to death.”

Others, however, didn’t want any talk of the virus and appeared more concerned about its economic impact. IRIN witnessed one group of local residents and passengers vandalising a hand-washing bucket placed near a boat. “There is no Ebola here, so we don’t want to see this damned bucket standing here and giving a bad name to our area. That’s why people got rid of it,” explained a motorcycle taxi driver.

Words, but no action

Last week, Congolese Minister of Transport José Makila announced a night-time curfew on the river and the deployment of patrol boats. "There will be no more sailing at night,” he said. “Come 6 pm, all transporters must spend the night exactly where they find themselves, and bring all the boats to the shores to be controlled by the health ministry.”

But the government decree does not appear to have translated into action.

“I only heard it on the radio,” said the supervisor of one port, through which about 100 vessels pass daily. “We have yet to see those motorised boats patrol the river day and night to ensure that the passengers and boat crews abide by the law and pull to the shores to be screened,” the supervisor, who gave his name only as Bosco, said.

“I really wonder how these operations will be carried out since there is a distance of 600 kilometres between Mbandaka and Kinshasa, and the river is huge and dangerous,” he added.

Alain Nzonda, who crews on a barge carrying charcoal, timber, and people to Kinshasa, joked that he also served as the vessel’s health inspector.

“I’m on the lookout for sick-looking passengers who board at Mbandaka,” he said. “I don’t want them to take Ebola to the capital where our families live. Just imagine the disaster that it will bring to us if even one single Ebola-infected passenger were to board the boat to Kinshasa. He will not only die on the way but infect everyone in the ship, including me.”

On the bustling river, small pirogues used by fishermen, hunters, and farmers compete for space with strings of tug-pulled barges laden with cars, livestock, charcoal, and people.

The pirogues ply nearby riverside settlements, while the barges travel to cities as far away as Kinshasa, Kisangani, and Bangui.

For most passengers and crew, there is little choice but to continue as normal.

“We are carrying on with our lives regardless of what’s happening around us because we have families to feed and kids to send to school,” said Gaston Ndjoku, a fisherman.

Maize seller Rose Ilumbe, about to board a boat for Zongo on the CAR border, agreed: “We cannot lock ourselves in our houses to hide... May those who died of Ebola rest in peace, but life must go on.”