The Democratic Republic of Congo’s deadliest ever Ebola outbreak appears to be drawing to a close, but aid groups have cautioned against scaling down response efforts too quickly amid concerns of survivors relapsing, the infection living on in body fluids, and a growing number of COVID-19 cases spreading across the country.

No new confirmed case of Ebola has been recorded since 17 February, according to the World Health Organisation (WHO). This has left once packed treatment centres empty, and means that the 21-day incubation period during which transmission between people normally occurs has long since passed.

The WHO said it would wait until 12 April before officially declaring an end to the 20-month epidemic – the world’s second largest – which sickened over 3,400 people and left more than 2,200 dead.

But response workers told The New Humanitarian that some 1,200 survivors must still be closely observed in case they pass on the virus, and cautioned that new cases may yet emerge in areas where ongoing armed violence makes monitoring difficult.

Survivors will also need support finding jobs and acceptance in their communities after the outbreak ends, aid groups added, and local health workers will need funding and training to contain future outbreaks when responders move on.

With 180 confirmed cases of COVID-19 reported to date in Congo – including in the Ebola outbreak zone of Beni – health authorities said they are also considering repurposing resources from the Ebola response to manage the new disease.

“The Ebola epidemic is ending progressively, but systems we have established allow us to address coronavirus,” said Jean-Jacques Muyembe, the doctor leading Congo’s Ebola and COVID-19 responses.

Containing Congo’s tenth Ebola epidemic has required huge sacrifices from residents and responders alike, as they confronted hundreds of attacks on treatment centres, medical staff and patients, and outbreaks of militia violence that hampered relief efforts.

This briefing explores what finally turned the tide, whether the Ebola virus could rebound, and how responders could draw down without harming communities where general health needs remain as urgent as ever.

What’s the risk of a new flare-up?

Quite likely, according to the WHO. Ebola is endemic in Congo – the first case appeared in 1976 in a village near the Ebola River – and there’s nothing stopping it from spreading again through animals in different parts of the country.

Responders are mindful that the 2014 West Africa outbreak saw new cases confirmed after the epidemic was formally declared over. Though rare, survivors have been known to relapse; one individual who fell ill in July in eastern Congo became sick again in November and infected 29 people.

Survivors are also known to carry the virus in their body fluids, long after they are cured – though this does not necessarily mean they are infectious.

“Even if we get to zero [cases] by 12 April, we must continue doing robust surveillance in the months to come,” said Abdou Dieng, the UN’s emergency Ebola response coordinator.

Some parts of the outbreak zone have meanwhile experienced heavy fighting in recent months, causing local health workers – who play a central role in detecting and communicating possible cases – to flee. Though responders are confident they have cut all transmission chains, they aren’t ruling out the possibility of hidden cases.

“Even if we get to zero [cases] by 12 April, we must continue doing robust surveillance in the months to come.”

“We don't know exactly what is happening in those areas,” said Dr. Rigo Fraterne Muhayangabo, country director for the International Medical Corps in Congo. “That is why we need to maintain the set-up as it is for now.”

What happens if responders leave too quickly?

A “system-wide scale up” mechanism that helps aid groups mobilise additional resources during deteriorating humanitarian situations was deactivated by the UN last month, after almost a year.

On top of survivor monitoring, those directly affected will need help reintegrating into communities and recovering economically, while more than 2,500 children orphaned by Ebola will need looking after.

Local health centres and workers will also need more training and better equipment if they are going to stop future flare-ups from becoming epidemics, said Muhayangabo.

“Strengthening the health system was not really a priority [during the response],” he said. “Now our feeling is that they are not yet ready.”

A post-Ebola transition plan is currently being drawn up by those involved in the response, and will include programmes to help survivors and strengthen health systems. But adequate funding is not guaranteed, said the UN’s Dieng.

“You can imagine there is a kind of donor fatigue,” he said. “[This response] has required a lot of money.”

Plenty of non-Ebola related needs exist in outbreak areas – and in other parts of the country – where hundreds of thousands of people have been displaced by conflict in recent months.

“You can imagine there is a kind of donor fatigue. [This response] has required a lot of money.”

Could Ebola resources be used to tackle COVID-19?

“The disease is a bit different…but there is a lot in place that should be maintained,” Munsch said. “All the structures that we have in place could be a really huge help to this new outbreak.”

Responders had been looking at how to shut down Ebola treatment and transit centres, but the process has been suspended while they investigate using them for COVID-19 patients.

Muyembe said the country would benefit from Ebola health screening procedures and hand washing stations already in place at airports, border crossings, and on roads between major towns.

Some NGOs that are working on programmes to prevent the spread of Ebola by educating communities are looking to integrate coronavirus messaging into their work, said Munsch.

Will the end of Ebola have an economic impact?

The outbreak negatively affected residents who were already food insecure, with the number of people visiting markets and the exchange of goods between territories significantly reduced.

But many residents found job opportunities with response organisations, which rented 4x4 vehicles, hotel rooms, and office space in a boost to the local economy.

Community health workers earned additional income for helping to detect and prevent the spread of the virus in villages, while members of the Congolese security services who escorted responders received bonuses on top of their standard salaries.

Dieng said he expected tensions to emerge in the coming months when community workers are asked to provide the same services without payment and the security forces lose their bonuses.

“It's very hard for those people who have worked for Ebola for a year and a half...and particularly the military side, who used to do their escorts,” he said. “We are afraid their reaction may compromise a bit the rest of the response.” 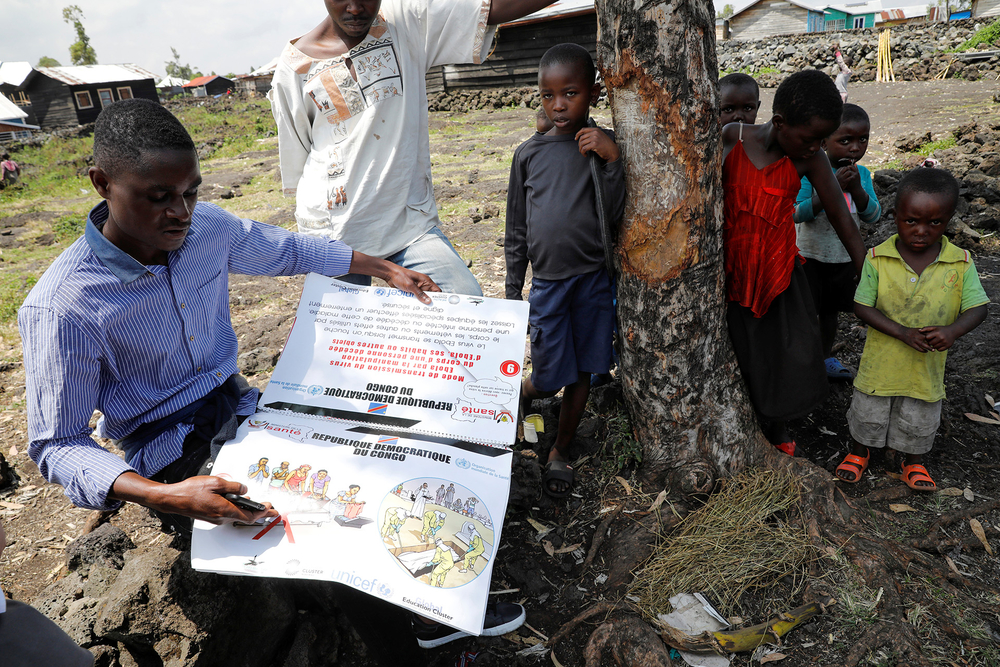 Baz Ratner/REUTERS
Congolese volunteer Ferdinand Tangenyi displays a flip book he uses to inform people about Ebola in the eastern city of Goma.

What was the turning point?

Better community engagement, less militarisation, and effective drugs, according to responders who spoke with TNH.

When relief efforts got started there was little attempt to include residents and local health workers in the response – an oversight that created significant tensions.

Residents suspected of Ebola were taken to health centres that were often far from their homes and in a manner that some found intimidating. And many residents questioned why the illness seemed to be the only one of interest to the international community and government when so many other diseases regularly cost lives.

“You had this system come in, managed by outsiders, with a lot of money, managing just Ebola,” said John Johnson, an MSF emergency coordinator who took part in the response. “Then you had this other sad, underfunded, parallel Congolese health system that was there for everything else.”

Soldiers and police officers – long distrusted in the region – were often seen stationed outside treatment centres and escorting responders around towns and villages, further heightening tensions.

Distrust soon led to attacks on Ebola workers, treatment centres, and patients, forcing responders to rethink their approach to the epidemic.

Communities and local health structures were eventually given a greater role in the response, military escorts were cut down, and residents were offered support for other health and humanitarian needs.

More than 300,000 people were meanwhile inoculated with Merck’s Ervebo vaccine, which was initially deployed as an experimental drug on compassionate grounds but is now approved by US and European drug authorities and licensed in Congo.

Two new treatments based on Ebola antibodies helped bring down the disease mortality rate and created a pool of survivors, who were hired by responders to convince others with the disease to seek treatment.

Sporadic attacks on health workers continued, but the epidemic was finally brought under control.