This article is part of our in-depth coverage. Read more like this...
MBANDAKA, The Democratic Republic of Congo

Relatives ride in on motorbikes, bust three patients out of an Ebola treatment centre, and take them to a church to be prayed over by 50 people. Later, one dies at home, another in hospital, while the third lives but could have infected an untold number of people.

It sounds like a scene from a Hollywood disaster movie, but it took place less than three weeks ago in Mbandaka, a city of 1.2 million people in the Democratic Republic of Congo. A huge effort is now underway here to raise awareness about the virus and prevent its spread.

The government and international NGOs are leading the charge, but some of the most effective work is done by the local community and Church leaders. In the Roman Catholic archdiocese of Mbandaka-Bikoro, for instance, sacraments such as baptisms and anointing ceremonies have been suspended to avert the risk of transmitting Ebola.

“Ebola is real,” stressed community leader Gabriel Selemani at an impromptu gathering near a marketplace. “Don’t play games with it, and don’t listen to rumours and lies being spread around that it is a fairy-tale, an international conspiracy, or as a result of witchcraft.” 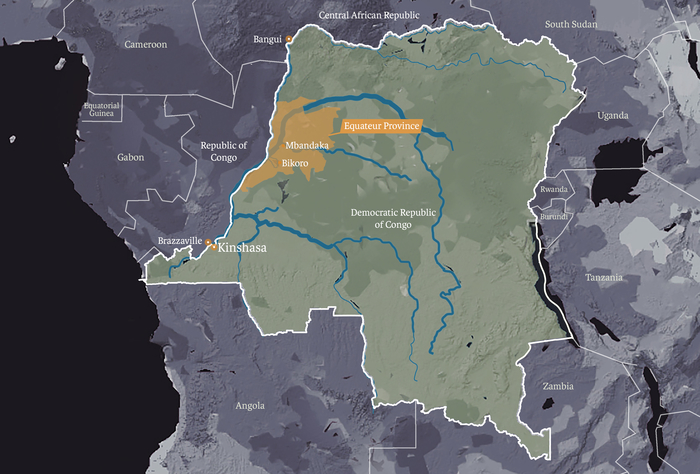 In local schools in Mbandaka, teachers hammer home the message too, leading children through a special “Ebola, Go away!” song and making hand-washing and temperature-taking mandatory before class.

Talking to people on the city’s streets, it is evident that many take the dangers posed by the outbreak extremely seriously. But others disregard the risks, while some are in denial about the outbreak or say they believe news of it has been planted as some kind of Western plot.

Many still flock to traditional healers or witch doctors like Papa Nganga, believing Ebola to be a product of witchcraft.

“What I need right now is for the NGOs and the health ministry to stop spending money and bring me all the Ebola patients,” Nganga told IRIN. “My ancestors, who still live in this statue, are empowering me to heal anyone in two days.”

News of Congo’s latest Ebola outbreak (this is its ninth since the first-ever case was discovered near the country’s Ebola River in 1976) emerged in early May in the northwestern province of Equateur.

Read more: Ebola outbreak in Congo – what you need to know

As of Thursday, 37 Ebola cases had been confirmed, all in Equateur, including 25 deaths, according to the World Health Organisation.

Three deaths in Mbandaka by 22 May – including the two in the motorcycle kidnapping/escape incident – led health experts to warn that the outbreak was on a “knife-edge” and could spawn a wider epidemic.

The latest confirmed infection, in a village in the remote Iboko area, was recorded on 30 May. Experts caution that because the index (first) case was never identified and it can take three weeks for symptoms to appear, it is too early to declare the outbreak contained.

The greatest fear remains: that an infected person could carry the disease to a major urban centre, like the capital, Kinshasa, or Bangui, the capital of neighbouring Central African Republic – both reachable via the largely unmonitored Congo River.

This time around, a new weapon has been deployed in the fight against Ebola – a vaccine, administered to anyone who comes into contact with a confirmed case. Tested towards the end of the West Africa epidemic that claimed more than 11,000 lives from 2013-16, this is the first time a vaccine has been part of a concerted effort to contain an Ebola outbreak.

For the so-called ring vaccination campaign to work, every person who has come into physical contact with a suspected case must be identified, vaccinated, and then monitored for symptoms.

While WHO experts say ring vaccination and contact-tracing are key to stemming outbreaks, they are time-consuming, invasive, and hard to do effectively in rural areas with patchy phone networks like Bikoro and Iboko, where the outbreak is thought to have originated. A journey of just 20 kilometres in this region can take several hours, and the vaccine needs to be kept at an extremely low temperature.

But containing the outbreak also depends on the willingness of the local community to help – by raising the alarm when a case is suspected and by informing health workers promptly and accurately of everyone an infected person has been in contact with.

Winning over the sceptics

While most people are cooperating and health workers say all the immediate contacts of known cases in Mbandaka have now been vaccinated, rumours and conspiracy theories have also taken root.

Hordes of health officials (WHO alone has sent 170 experts), aid workers, and journalists have descended on Mbandaka, often making disconcerting demands or asking difficult questions. Some locals are benefiting from an economic boom, but others have been hit by unexpected price hikes and many are wary of the foreign invasion.

“The so-called Ebola is nothing but a curse. Ebola is a white man’s invention to attempt to control Africa’s resources,” pastor Jean-Pierre Elumba told his riveted congregation, meeting near one of Mbandaka’s many river ports. “Brothers and sisters, whether this Ebola thing exists here in Equateur or not, the truth is that the solution of Ebola lies in repentance, not in washing hands...

“Does anyone know anyone suffering from Ebola in their neighbourhood? If you know someone, please bring them to me, I will pray for that person and they will be healed. Now, shake the hand of the person standing next to you.” 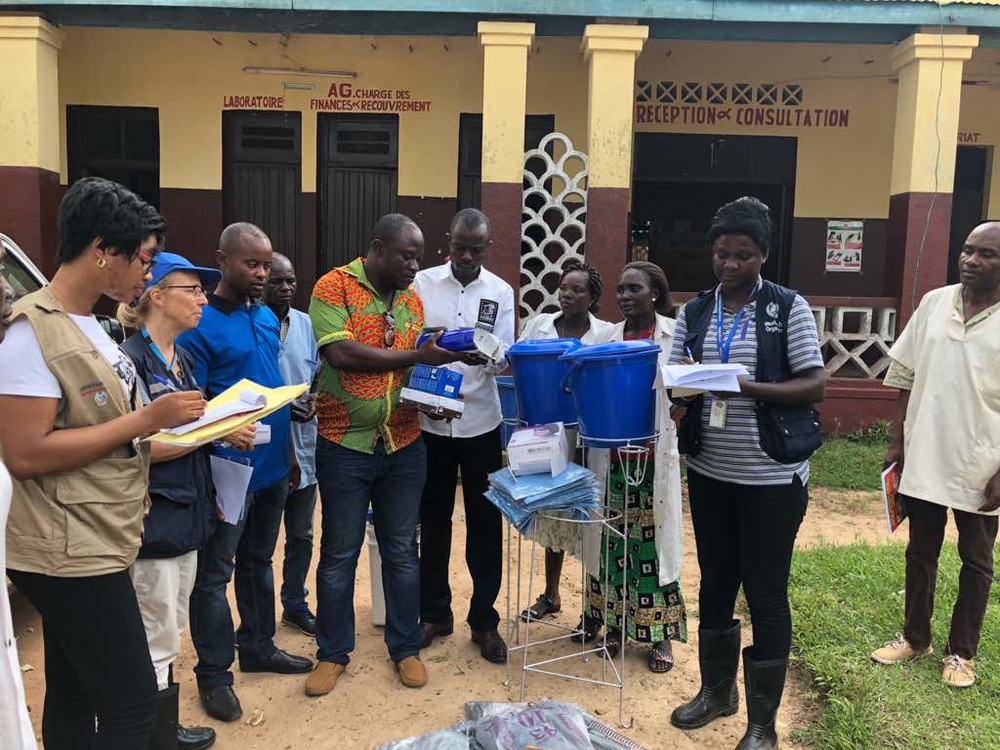 Oka/WHO
Infection prevention and control materials from WHO are brought to the General Reference Hospital in Mbandaka.

Elumba’s sermon is the exception rather than the rule. Raphael Mbuyi, provincial coordinator in Equateur for UK-based charity Oxfam, reckons four in five pastors are on-side with the response effort. “It is the remaining 20 percent still resisting that pose a problem,” he said. “And, among them, there are at least 80 percent that say Ebola is a curse from God.”

Oxfam, which is taking part in a larger awareness-raising campaign involving the Congolese government, UNICEF, and other international NGO partners, has recruited 120 local people to go door-to-door to get the facts out to as many families as possible. “We are well aware of the rumours going around about the disease,” Mbuyi said. “That’s why we are moving quickly to get the message across.”

In addition to buying radio air time to offer health professionals an opportunity to discuss Ebola, Oxfam is promoting phone-in programmes that allow listeners to ask questions about the disease.

The traditional practice of touching and handling the bodies of the dead was a major factor in the fast spread of Ebola in the 2013-16 West Africa outbreak.

One of the pillars of containing Ebola now is what the WHO calls “safe and dignified burials”, whereby professionals handle the corpses and follow a 12-stage guide, observing, as much as possible, local custom.

But not everyone is happy with the way this is going down in Equateur.

“I was in Bikoro and I was angry the way people were holding Ebola funerals,” said Elizabeth Mokia, a woman in her 70s.

“We are used to cuddling each other when somebody passes away, and embrace the dead to tell them how badly we are going to miss them and how much they meant to us. But now we don’t even hold a funeral, or we hold it far away from the corpse and don’t approach even the dead. The worst part of it is we don’t even shake the hand of our own best friend.”

Marthe Bomboka, a nurse and midwife working at Wangata General Hospital, turned down the chance to be vaccinated.

“The hospital superintendent told all of us to register for vaccination, whether we are treating Ebola patients or not,” she explained. “But when our colleagues who were vaccinated reported side-effects such as diarrhoea, vomiting, and migraines, I categorically refused to go for it.”

Bomboka said that before Médecins Sans Frontières opened a separate Ebola clinic at Iyonda, 15 kilometres from Mbandaka, fear of the virus had been scaring people away from the hospital. (There is now a second MSF isolation unit in Bikoro, and the international medical NGO is setting up other treatment centres in Iboko and Itipo.)

“We ran out of patients,” Bomboka said. “And the maternity consultations became free of charge, perhaps to attract patients and pregnant women to come. It shows you that people want nothing to do with this so-called Ebola.”

WHO spokesman Tarik Jašarević acknowledged possible side-effects from the vaccine but said these were “typically mild”, including “headache, fatigue, muscle pain, and mild fever”.

He also sought to reassure people, saying the vaccinations are free and voluntary (on the basis of written informed consent only), and are approved by the Congolese government’s ethics committee. Every person vaccinated receives two check-up visits, three and 14 days after vaccination, Jašarević added.

In a statement Wednesday highlighting that “information and social mobilisation are key to containing Ebola”, UNICEF trumpeted the fact that more than 300,000 people had been provided with lifesaving information by the organisation and its partners.

For the moment, at least, the Equateur outbreak appears to have been stopped in its tracks. Oxfam’s Mbuyi, for one, attributes this to both the vaccine and the awareness-raising campaign. 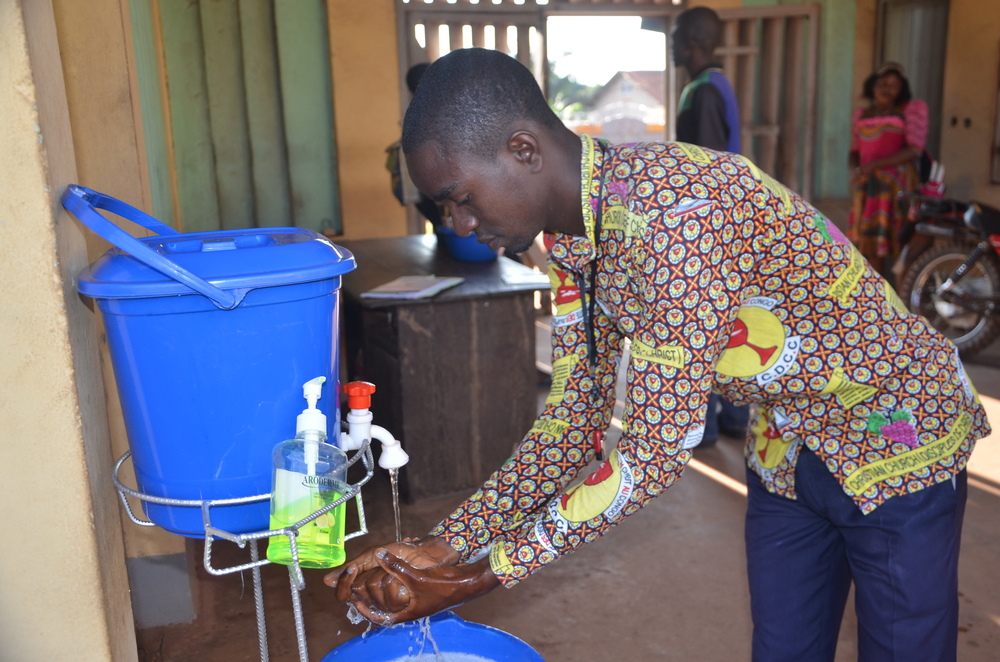 “We have seen an amazing change of behaviour in many people,” he said. “As a result of what we have been doing, many people are going to hospital to be vaccinated, and the culture of hand-washing is also being fostered in many areas and in households.”

Yet the vaccine hasn’t stopped some in Mbandaka from turning to alternative methods to ward off the virus, and others from purveying their “cures”.

Francine Kibala, 49, claimed to have developed her own powerful “vaccine” from plants in the giant Mai-Ndombe forest that are famed in Congo for their supposedly magical powers.

“This solution, which was mixed with the mysterious water of Lake Mai-Ndombe, is better and stronger than the vaccine brought here by the white people,” she said, brandishing a darkish liquid she referred to as her “trophy”.

One man who bought Kibala's “drinkable vaccine” strongly defended his decision: “Why shouldn’t I believe in her medicine? Congo’s forests are full of magical plants that can do wonders and cure many diseases. I bought it, drank some, and gave some to my family to protect us against Ebola.”

(TOP PHOTO: Health workers operate within an Ebola safety zone in the Health Center in Iyonda, near Mbandaka, on 1 June 2018. CREDIT: Junior Kannah/AFP)