Hundreds of refugees and asylum seekers in Sri Lanka have spent the past three months searching for safety across the island nation after being swept up in an anti-Muslim backlash following the April terrorist attacks that killed more than 250 people.

More than 1,000 refugees and asylum seekers were pushed from their rented homes after attackers struck six churches and hotels around the country.

In the aftermath of the suicide blasts, rights groups say mobs in the coastal city of Negombo – the site of one of April’s deadliest explosions – and elsewhere went door to door pressuring landlords to evict refugees, most of whom are religious minorities from Pakistan and Afghanistan, including members of persecuted sects.

Local rights advocates and the UN’s refugee agency, UNHCR, describe a volatile situation where plans to temporarily resettle displaced refugees were met with protests. In some cases, refugee families have gone from safehouse to safehouse only to be pushed out by local authorities.

“Every effort that was made to relocate people was received with a lot of hostility,” said Menique Amarasinghe, the head of UNHCR’s Sri Lanka office.

Roughly 90 refugees and asylum seekers forced from their homes are now living at a government-run facility in Vavuniya, in northern Sri Lanka, where they are under armed military guard. More than 100 other refugees are still sheltering at crowded mosques in Negombo and in nearby Pasyala, afraid to return to the surrounding communities.

“We’ve never had this situation in our history that refugees have been so scared they’ve had to live in camps guarded by armed forces,” Fernando said.

Of the 1,000 people originally displaced, the UNHCR said 228 people are still looking for safe homes, including the 90 remaining in Vavuniya.

The threats facing refugees are part of a larger anti-Muslim backlash that has deepened ethnic divisions in Sri Lanka since the Easter Sunday attacks, which authorities blame on a small group of Islamist extremists claiming allegiance to the so-called Islamic State.

“When I go outside of the mosque I fear what will happen to me.”

In seaside Negombo, about 30 kilometres north of Colombo, a suicide bomber killed dozens of worshipers at the city’s St. Sebastian’s Church in April. The government declared days of curfews here in May after mobs attacked Muslim-owned businesses. Local landlords also evicted refugees and asylum seekers like Ahsan Mahmood, a 24-year-old Ahmadi Muslim from Pakistan.

Mahmood fled to Sri Lanka two years ago. Along with 100 others, he has spent the last three months living inside the city’s Ahmadiyya mosque, which sits a few kilometres from the damaged church. Ahmadis are part of a Muslim sect that faces persecution in majority-Muslim countries like Pakistan; about 1,350 of the nearly 1,700 refugees or asylum seekers in Sri Lanka are Pakistani Ahmadis or Christians. 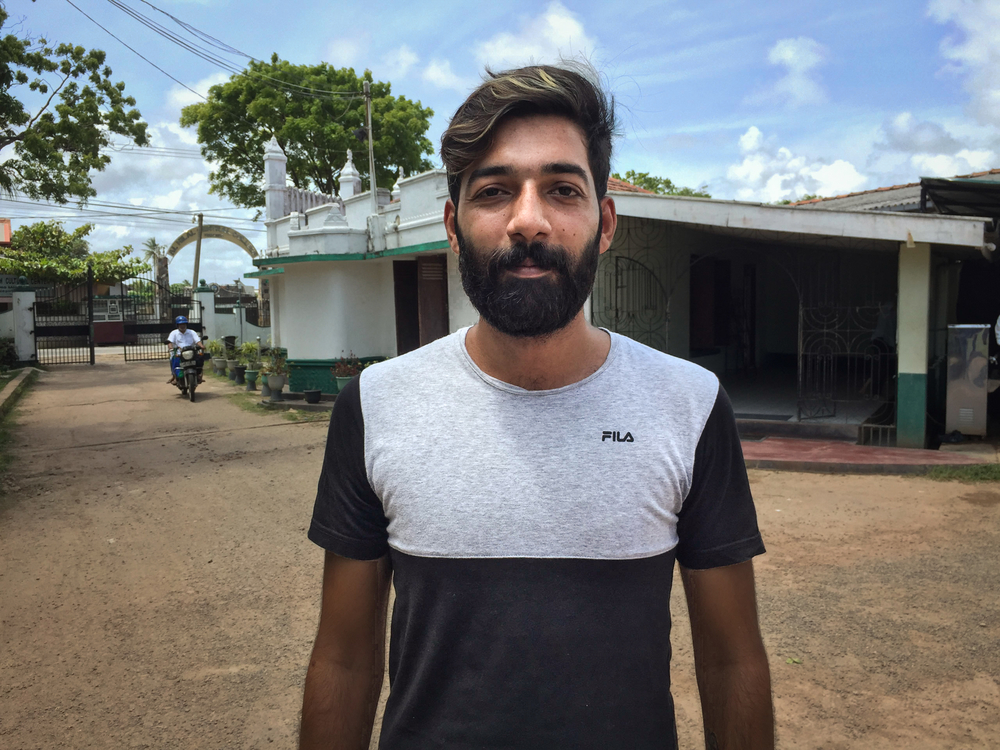 Adam Bemma/TNH
Ahsan Mahmood, a refugee from Pakistan, has been living at an Ahmadiyya mosque since being evicted from his rented home in Negombo. More than 1,000 refugees and asylum seekers were displaced in an anti-Muslim backlash following April terrorist attacks.

Mahmood said he’s now too afraid to leave the mosque because his unkempt beard may raise suspicion. Like the others here, he relies on food donated by religious organisations and humanitarians.

“When I go outside of the mosque I fear what will happen to me,” he said. “If the police stop me I have only two things to show them: my passport and refugee identification. If they don’t accept it, what would I do?”

With refugees like Mahmood evicted from their homes, the UNHCR said it had no option but to help relocate about 200 of the 1,000 displaced people to Vavuniya in mid-May. More than half have since returned to their communities or gone elsewhere.

“We asked the government to provide a location with security to ensure they were kept safe during this time, with a clear understanding we weren’t looking for a place for them to be kept indefinitely,” Amarasinghe said.

But finding more suitable refuge has been difficult.

Amarasinghe said Vavuniya residents at first protested the decision to move refugees to the area until the UNHCR offered assurances it would be temporary. The government also guaranteed the facility would be under armed guard.

The UNHCR is providing food and healthcare through a local NGO. But the refugees can’t receive visitors or move freely.

“These refugees have faced violence in their home countries and have come to Sri Lanka to seek asylum. Now they’ve had to leave their homes again.”

Fernando said he tried to help evicted refugee families in Colombo, Sri Lanka’s commercial capital, move to safer areas in May, intending to place them with volunteer hosts in Jaffna in the north. But an attempt to move a single family was met with hostility there as well.

“The host family registered them at the police on the day of the arrival, but the next day senior government officials opposed this,” Fernando said. “The distraught and exhausted refugee family was compelled to travel back to Colombo.”

Rights activists and faith groups are still trying to protect refugees caught up in the backlash. Fernando said the Vavuniya facility is closed to visitors, but he’s trying to help a handful of residents there find better homes elsewhere in the country. In the last month, he said, a number of Sri Lankan families and a church have offered to host refugee families.

In Negombo, Sister Noel Christine, a Catholic nun, has become a defender of her hometown’s displaced asylum seekers and refugees. 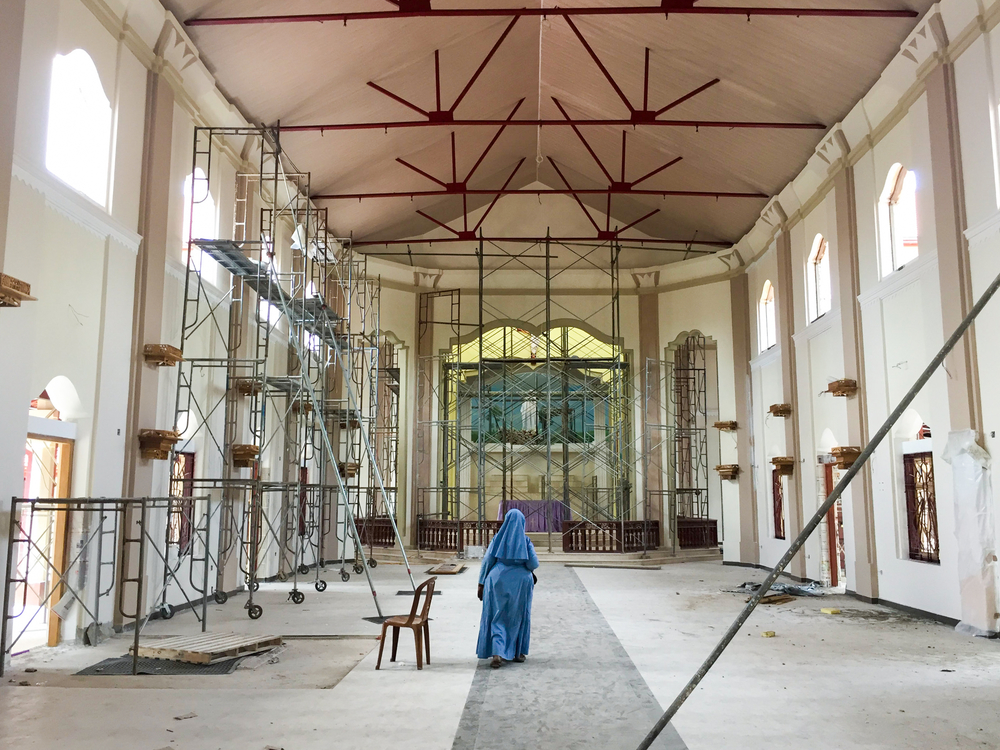 “These refugees have faced violence in their home countries and have come to Sri Lanka to seek asylum. Now they’ve had to leave their homes again,” Christine said.

Each week, she brings food to dozens of men sheltering at the Ahmadiyya mosque, including Mahmood.

The nun is also trying to heal the divided communities in Negombo. St. Sebastian’s Church re-opened its doors in late July, but the damage lingers for the city’s residents.

She’s part of a local group – the Negombo United Citizens Alliance – created to help quell the hostility that followed the attack. “We come to the streets and we tell everyone not to resort to violence,” she said.

But refugees like Mahmood describe a sharp contrast in their lives before and after the April attacks. He said local police and soldiers would occasionally harass him, but life was peaceful compared to the persecution he faced back home.

Mahmood used to worry about his family still in Pakistan; now they fear for his safety as a refugee.

“I pray for Sri Lanka,” he said. “I want it to be like it was before Easter Sunday.”

(TOP PHOTO: People pray outside St. Anthony’s Shrine in Colombo, which was one of several churches and hotels attacked in a series of suicide blasts in April.)