In Mannar, a sleepy town in northern Sri Lanka, a small construction site sits on a street corner next to stalls selling snacks, car parts, and other sundries. Here at this quiet crossroads last August, authorities discovered what they thought was a remnant of the country’s 26-year civil war: a mass grave containing 325 bodies.

Sri Lanka’s civil war ended a decade ago this month, but there are still open wounds for thousands of families with missing relatives. The International Committee of the Red Cross says 16,000 people are still missing. Of the countries that the UN Human Rights Council’s Working Group on Enforced or Involuntary Disappearances deals with, Sri Lanka has the second-highest number of disappearances.

In a country where reconciliation promises have languished, the mass grave in Mannar was an early test for Sri Lanka’s fledgling Office on Missing Persons – and now it has become a new source of tension for families who had hoped to find traces of loved ones.

In March, the investigation encountered an unexpected twist: carbon dating on bone samples showed the remains were at least 300 years old. According to the analysis, the mass grave had nothing to do with the war. The news has provoked anger among families of the missing, and deepened distrust of the only government body actively working on reconciliation issues.

“The government is lying because they have to be accountable for all the missing people,”  said Umapathay Borin, a member of the local chapter of an association of families searching for their disappeared relatives. 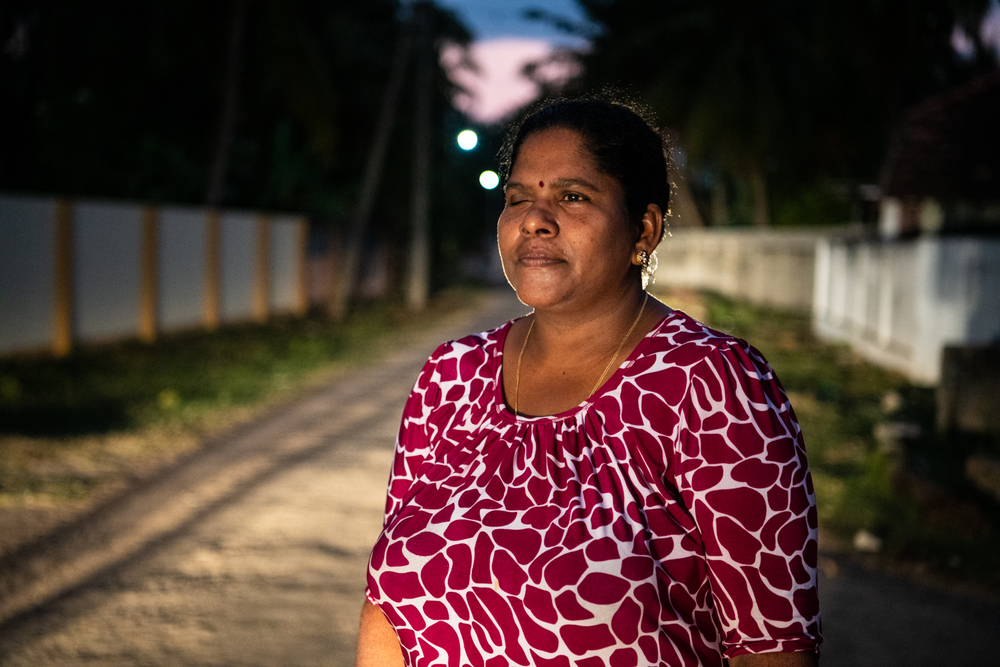 Laurel Chor/TNH
Umapathay Borin, an activist for families with missing relatives, stands near her home in Mannar District. Her husband disappeared after she surrendered him to the military at the end of the civil war.

Mannar was an epicentre for the war’s violence. It was part of territory occupied by the Liberation Tigers of Tamil Eelam (LTTE), the rebel group that sought an independent Tamil state after decades of tensions between Sri Lanka’s Tamil minority and the majority Sinhalese. Most of the fighting unfolded in the country’s Northern and Eastern provinces; these regions bore the brunt of human rights atrocities committed on both sides, including torture, enforced disappearances, and extrajudicial killings.

Last week, the government imposed days of curfews after violent mobs attacked Muslim-owned homes and businesses – part of a growing backlash following April’s Easter Sunday suicide bombings that killed more than 250 people. Sri Lanka’s Muslim minority were largely trapped between the opposing sides during the civil war, but rights groups say the stalled reconciliation is part of a culture of impunity that has fuelled religious and ethnic tensions elsewhere.

The scale of civil war for a country of roughly 21 million is staggering, with the violence and rights abuses affecting all cross-sections of society, regardless of religion, ethnicity, or region.

For those left behind in majority-Tamil Mannar District, the mass grave had symbolised hope that some might find answers about the fate of the missing.

“My child should know what happened to his father,” said Borin, whose husband disappeared in the war’s chaotic aftermath. When the military declared victory, they ordered that anyone with affiliations to the LTTE surrender. Like hundreds of others, Borin handed her loved one over to the military, believing promises that they would be safe and that due process would be followed. She and her son, now 10 years old, never saw him again.

“The government has always been cheating us, telling lies.”

Borin’s is among many families here who believe the government will never reveal the truth about the mass grave.

A single biscuit wrapper has become a point of fixation. A wrapper belonging to a popular biscuit brand – allegedly with a 1990 expiry date – was found among the remains. The finding was reported in several local media outlets. Many here see it as proof that the mass grave is indeed from the civil war; they claim the carbon-dating reports were falsified, and that the government lied.

“We don’t know what they sent [for testing],” said Manuel Udaya Chandra, the president of the local association for families of missing people. “They have sent some old bones from somewhere else,” she suggested.

Udaya Chandra is still looking for her son, who was 24 years old when he disappeared in 2008. The way she sees it, there is no way the authorities can be trusted.

“The government has always been cheating us, telling lies,” Udaya Chandra said. “There is only one solution: an international, independent commission.”

Ruki Fernando, a local human rights activist, said the distrust is understandable. Families have received few answers in dealing with government institutions in the past, and he says there has been a “lack of demonstrated progress” from the missing persons office so far.

“[The] OMP needs to win trust by actions and not words, primarily by progress in tracing [the] fate[s] and whereabouts of at least [a] few disappeared persons,” he said. 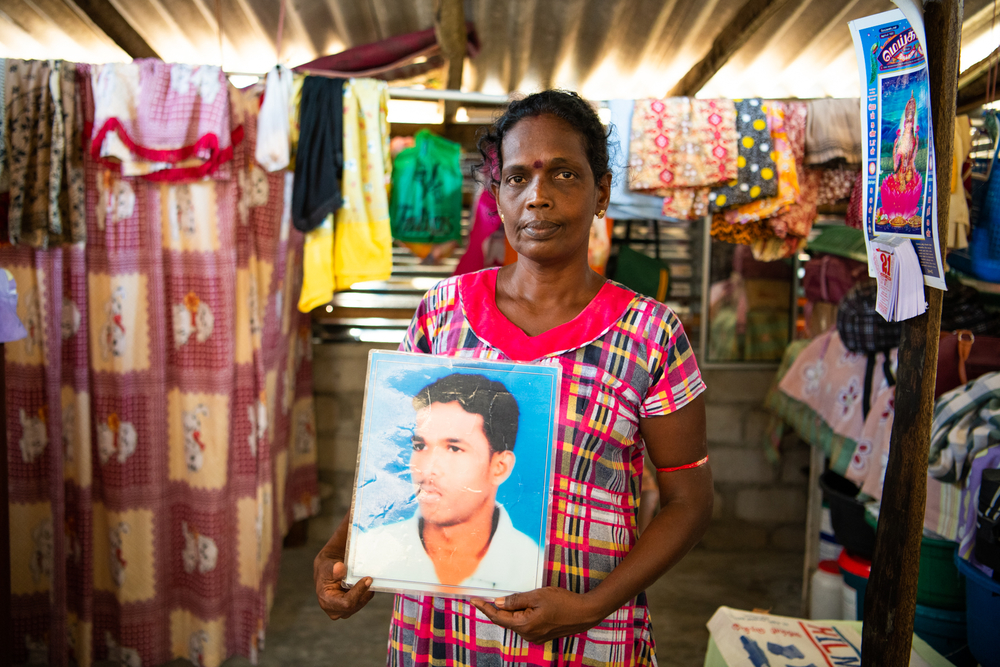 Rajaduraie Subalaxmi holds a picture of her son, who disappeared in 2007 when he was 16. She believes he joined the Tamil Tigers and surrendered himself after the military declared victory. 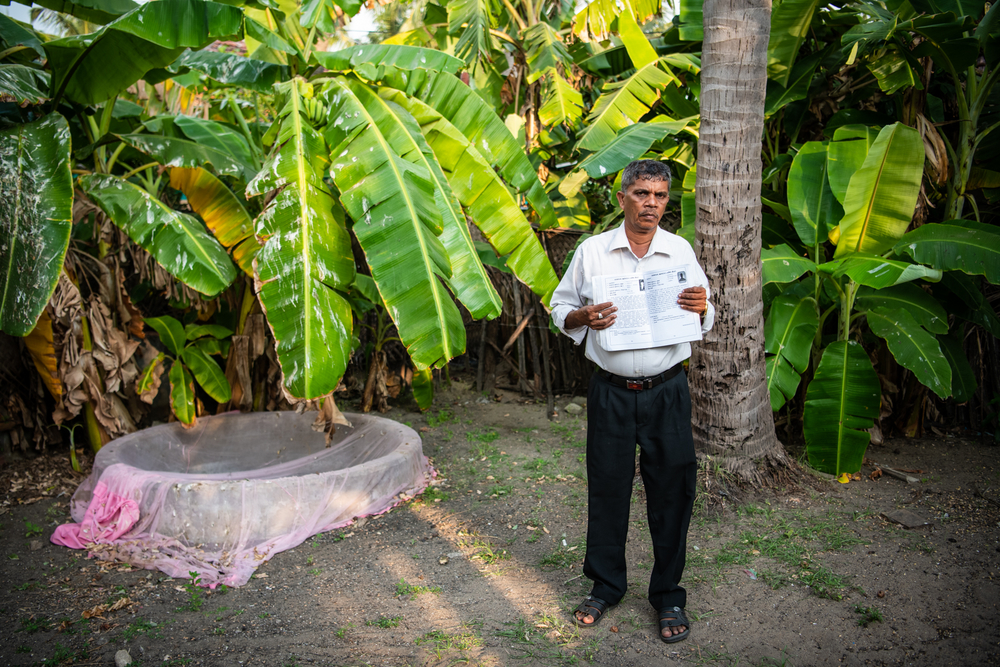 Anthony Sahayam, a member of a local association for families of the missing, holds records detailing the cases of three relatives who disappeared in 2007 and 2008. 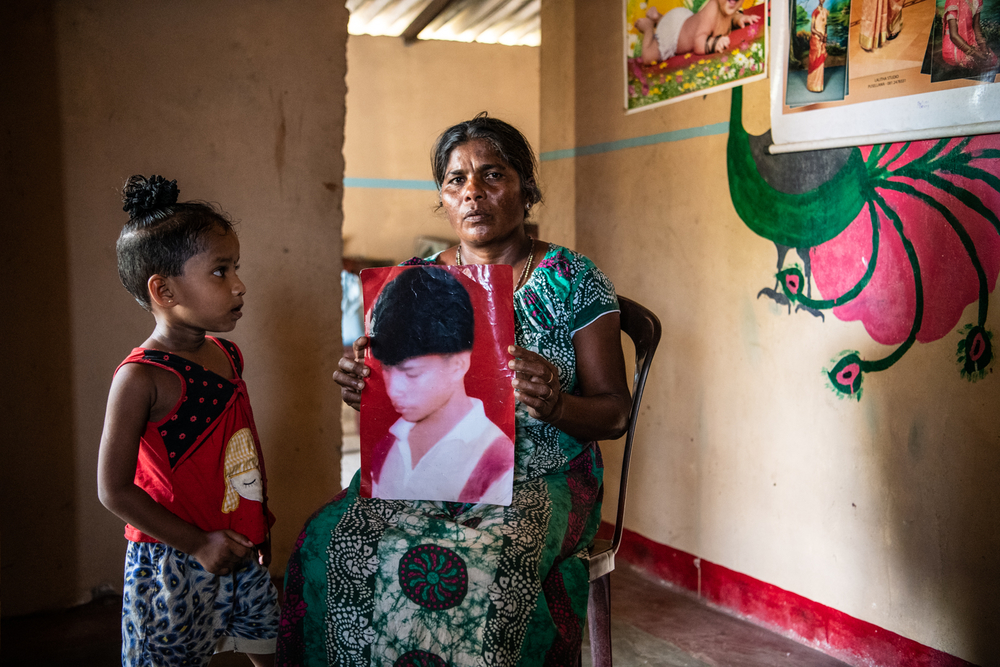 Sinnaieah Nageshwari, along with her granddaughter, holds a portrait of her son. He was 16 years old when he disappeared in 2009 while going to fetch water. “We have no trust with the OMP or the Sri Lankan government,” she said. 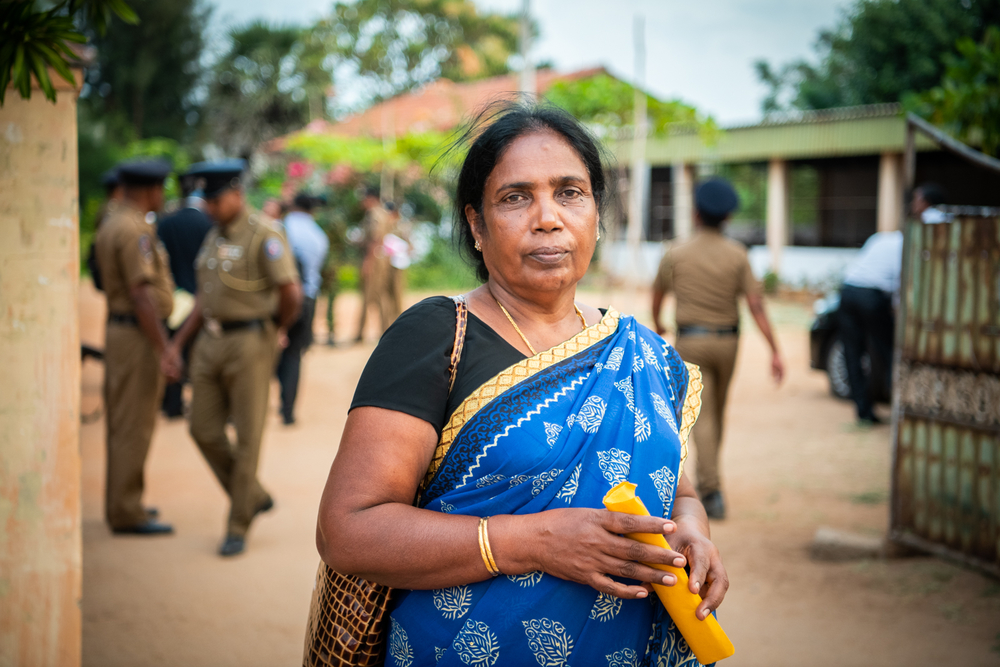 Manuel Udaya Chandra, the president of the Association of Families Searching for Their Disappeared Relatives – Mannar District, waits outside a courthouse, where a magistrate later ordered an end to excavations of a mass grave. 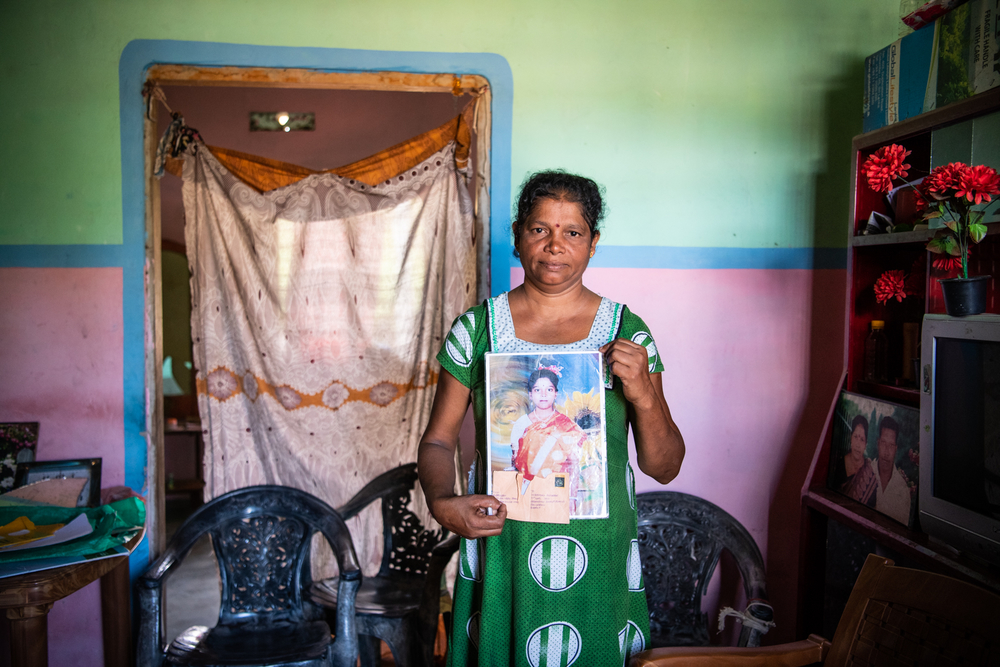 Ramakli Pubameswary was separated from her daughter, whose picture she holds, after they were ordered onto separate buses while fleeing from violence just a month before the war ended in 2009. Her daughter was 14 at the time, and she never saw her again.

Much of the scepticism is directed at the Office on Missing Persons, which funded the excavation of the site and supported the carbon-dating test.

The office only began its work in 2018 – three years after Sri Lanka pledged a swathe of reconciliation measures, including the establishment of a judicial mechanism to investigate war crimes and human rights abuses, and the creation of three separate commissions that would deal with disappearances, reparations, and non-recurrence.

Only one of these four promised institutions is functioning: the OMP. The advocacy group Sri Lanka Campaign called the lack of progress “depressing” in a report released earlier this year.

Just nine months after the OMP commissioners were named, the Mannar site was declared the largest mass grave ever discovered in the country. How the office dealt with the first mass grave investigation to fall under its scope has been scrutinised as a test of its effectiveness, its ability to fulfill its mission, and its credibility.

The office itself says families have “deep scepticism and distrust” of its work.

“Any state institution which has been set up to look into issues of the disappeared [is seen as] suspect and they feel they are not getting answers quickly enough,” said the office’s chairman, prominent human rights lawyer Saliya Pieris. 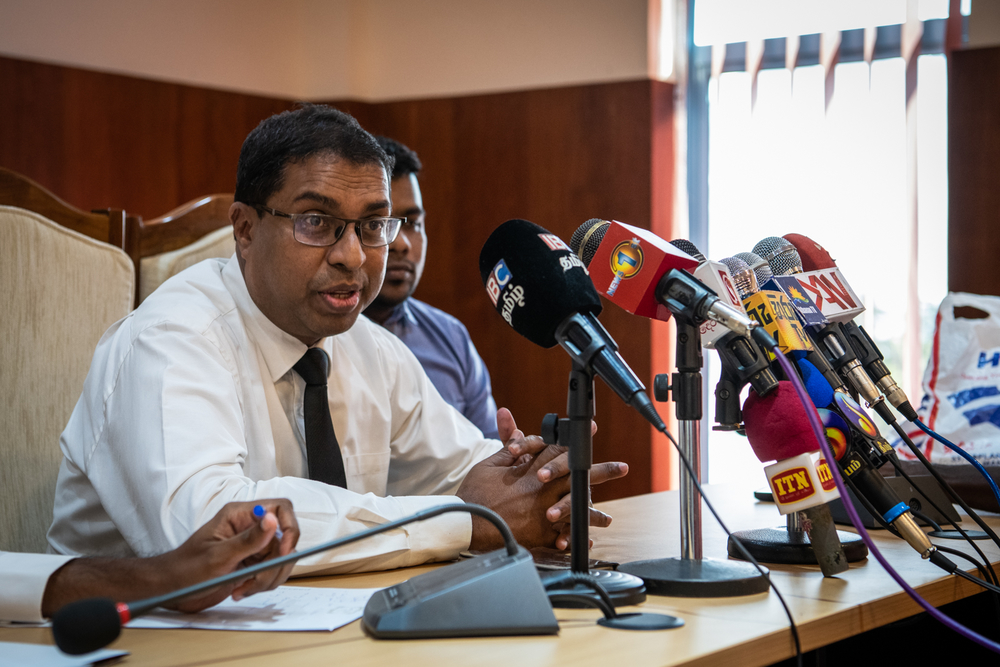 Laurel Chor/TNH
The chairman of the Office of Missing Persons, Saliya Pieris, speaks to the press in Mannar District.

For families with missing relatives in Mannar, the mass grave has magnified this distrust. Pieris said the OMP has been reaching out to families and civil society organisations, making sure they are consulted as the office continues to build its operations.

“It’s not easy,“ Pieris said. “Some of them have fixed opinions, at all costs.”

The OMP chairman says that international inquiries, as demanded by some activists, won’t work for resolving enforced disappearances in Sri Lanka.

“You need an effective domestic framework,” Pieris said, adding: “That can only work if the families cooperate.”

Pieris is urging patience to allow his office to do its work. But families whose relatives have been missing for years are waiting for answers.

“If the government tells us [what happened], it will not bring them back,” said Borin. “If they tell us what happened to them, and why they killed them, then we will accept what they say.”

(TOP PHOTO: Anthony Sahayam goes through family records of missing relatives. A member of a local association for families of the disappeared, Sahayam is searching for two cousins and his nephew, who were arrested in 2007 and 2008 and never seen again.)