When Mohsen al-Matari’s wife went into labour the week before last, she was advised to seek an emergency caesarean section. But the closest hospital in western Yemen turned her away, saying they weren’t equipped for the procedure. Go to the capital, they told her.

“I didn’t have enough money to take her to Sana’a,” Matari, who lives 30 kilometres west of the city, told IRIN. “I was forced to take her to a midwife in our village.”

The Mataris were lucky to have someone so close who could help – she delivered a healthy baby. Across the country, other Yemenis who need medical attention are less fortunate. An acute shortage of medication, supplies, and staff are compounding damage by airstrikes and forcing Yemen’s doctors to turn away patients in dire need of treatment.

Before Houthi rebels took over Sana’a, before they forced President Abd-Rabbu Mansour Hadi from power earlier this year, 8.6 million of Yemen’s population of 25.2 million had no access to adequate healthcare.

Since a Saudi Arabia-led coalition began trying to oust the Houthis from power by pummelling the country with airstrikes in March, more than 5,000 people have been killed, including 2,300 civilians. Last month, the World Health Organization warned Yemen’s healthcare system was “on the brink of collapse,” estimating that 23 percent of the country’s medical facilities were no longer functional.

See: Bomb it, fix it: Saudi aid to Yemen

The hospital where the Mataris sought treatment, the September 26th Hospital in Bani Matar, was bombed three times late last month. The coalition was apparently targeting the building next door.

A hospital guard at the September 26th – named for the day in 1962 when Yemen’s last monarch was deposed –was killed in one of the strikes, and some 10 staff members wounded.

The doors and windows of the hospital were blown out, hospital director Mohammed Abduladheem Zaid told IRIN. During the airstrikes, patients were left to fend for themselves as doctors abandoned their surgeries and sought shelter.

After the bombings, “the emergency room, X-ray department, and maternity wards stopped work completely until patients broke into the hospital,” Zaid said. “They forced the staff to return to work because [the patients] couldn't find another solution.”

It’s not the only hospital to be hit. Al-Thawra General Hospital in Sana’a, Yemen’s largest medical facility, suffered significant damage in May after an airstrike, believed to be meant for a Houthi weapons cache in nearby Noqoum mountain, apparently missed its intended target.

In Aden, one of the city’s largest hospitals, the Republic, also lies shattered and empty, its first floor badly damaged by shelling.

Many doctors are doing their utmost to treat patients in partially bombed-out buildings, but there is often little they can do if they don’t have the right medication.

In April, the UN Security Council slapped an arms embargo on the Houthi rebels, but the strict import restrictions have in practice meant that precious little food, water and medical supplies have made it in. With local markets tapped out, hospitals are now relying on aid organisations to stock their medicine cabinets, but this simply hasn’t been sufficient to keep treatment steady. 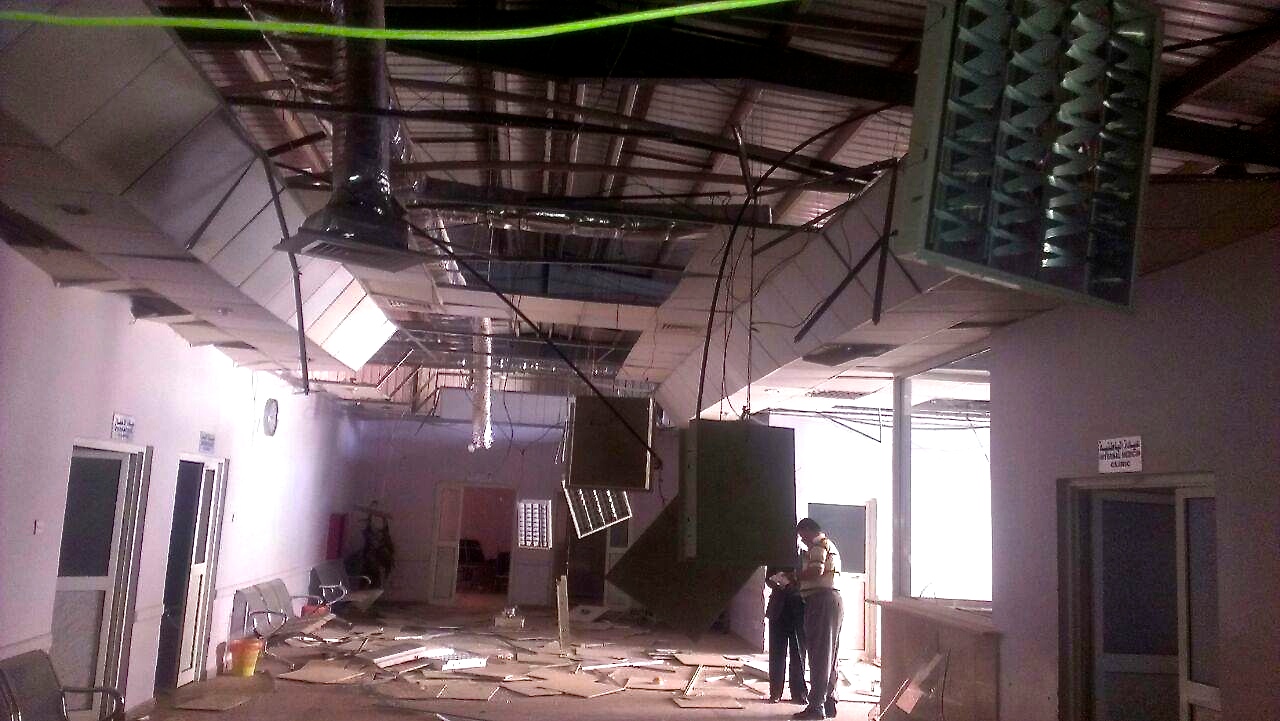 Standing outside the gates of Sana’a’s General Military Hospital, a frustrated 62-year-old Mohammed Ali had just been rebuffed for a second time when he spoke to IRIN.

“I was told that Al-Thawrah Hospital has stopped dialysis for a week, and here at the Military Hospital they told me they ran out of dialysis solution and today is the last day [they’ll be offering dialysis treatment].” Ali was unsure where to turn to next for dialysis for his wife, who has acute kidney failure.

Anwar Mughalis, chairman of the board at Al-Thawrah, confirmed that his hospital was running a bare minimum of services and was regularly turning away patients.

"We've run out of many medical instruments and medications like dialysis solution, artificial valves [for heart surgery] and stents," he told IRIN. "It's impossible to get them from the local market because companies can't import them."

Until last week, Mughalis was able to perform dialysis thanks to solution salvaged from hospitals that had shuttered, but that supply too has dried up.

“Even those solutions have run out, and now I can only take cases of patients who are facing death.”

His cardiac unit has nearly ground to a halt as well, and he has 120 patients waiting for urgent heart surgery.

Mughalis blames the blockade. “Commercial ships are not allowed to come to Yemen, so the companies cannot provide medicines and medical equipment. Only the international organisations are allowed to import them, but [they] cannot import everything we had before the war.”

Many medications also require careful climate-controlled transport, simply not an option in the chaos of Yemen today, he noted.

"I can only take patients who are facing death."

Hassan Boucenine, head of mission for Médecins Sans Frontières in Yemen, confirmed the validity of the doctors’ complaints.

“Because of the embargo, the market cannot cover the needs of the hospitals and patients and the Ministry of Health have extreme difficulty in importing goods,” Boucenine told IRIN. MSF brings in the large majority of its medical supplies from abroad, 400 tonnes since March.

“Our supply is mostly for emergency, but also we bring medications and tools for large variety for services in the hospitals we are supporting,” Boucenine said.

Adnan Hizam, a spokesman for the International Committee of the Red Cross, told IRIN it was also importing supplies and medication for local hospitals, as well providing some budgetary support.

While hospitals can’t seem to get drugs into the country, they have the opposite problem with staff. Nearly all foreigners, including medical personnel, have left Yemen.

Mughalis said he had lost 400 staff members since the bombing began in March, including a lot of foreign expertise. “Nurses and doctors, [including] anaesthesiologists, heart and kidney specialists have left the country since the beginning of the [Saudi] aggression. This has caused a lot of confusion.”

Local staffers have left too, as they join the 2.3 million Yemenis internally displaced by the fighting. Hospitals have attempted to compensate by increasing doctors’ shifts from eight to as long as 24 hours. Those working long hours bunk in the quarters formerly occupied by foreign doctors. Medical students have even been drafted early to help keep hospitals running.

Although the Houthis recently agreed to the terms of a UN-brokered peace deal, the bombs keep falling and no clear end is in sight. In the meantime, Yemeni civilians trudge from hospital to hospital in search of help, while others are left to fend for themselves. Some, like the Mataris, get lucky. Others don’t.

See: Is the Yemen peace deal for real