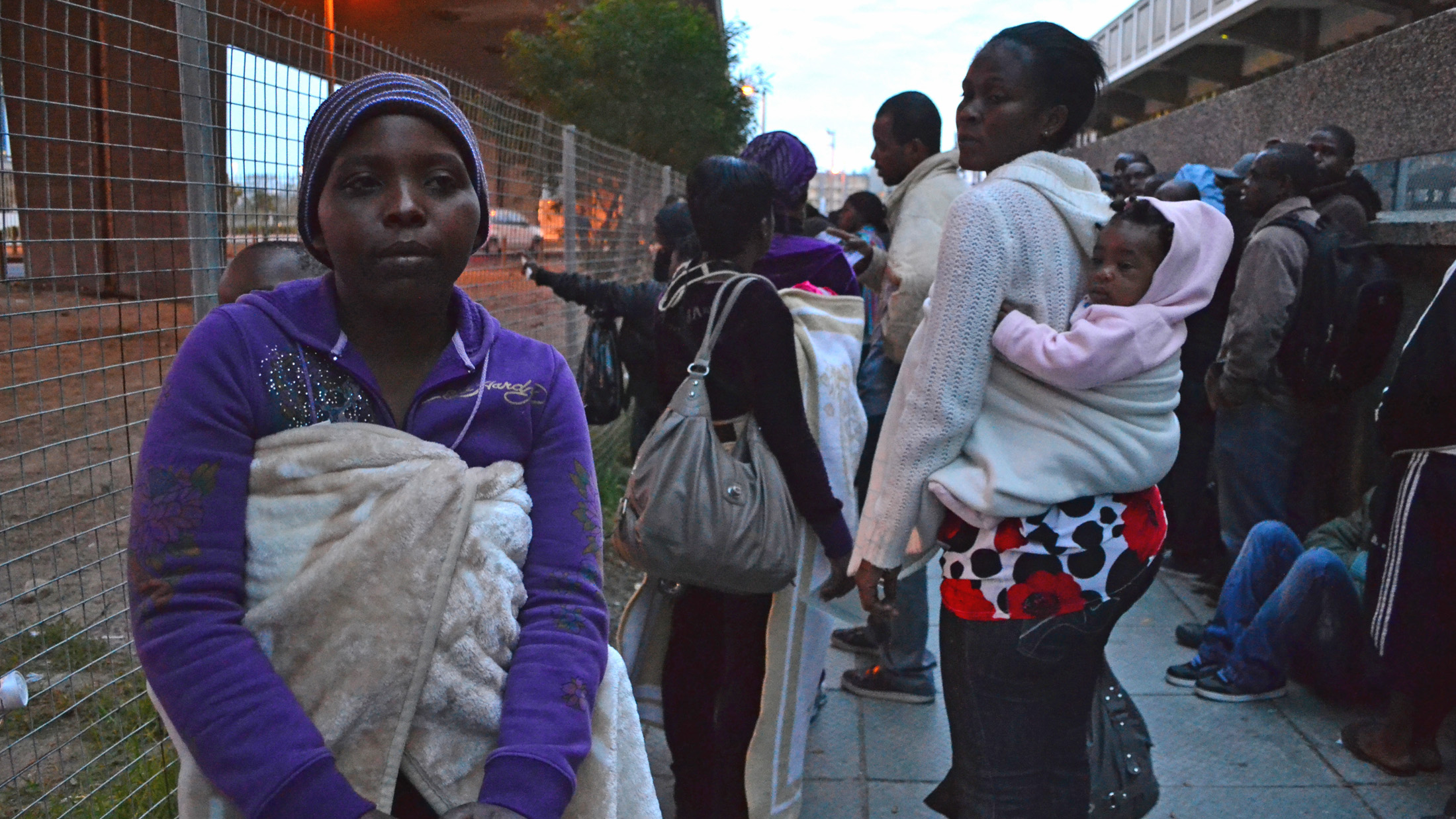 When Jean Baptiste*, a medical student from Lubumbashi, in the Democratic Republic of Congo (DRC), arrived in South Africa in September 2012, he headed straight for Cape Town, where he knew he would be able to stay with his brother. No one at the border told him that it was no longer possible to apply for asylum in Cape Town.

He has since approached the city’s Refugee Reception Office (RRO) 18 times to try to secure an asylum seeker permit and become documented, but he has never made it past the security guards outside.

Without documentation, finding even casual work in Cape Town has proved impossible, and without work, he lacks the funds to travel to the cities of Durban, Pretoria or Musina, the three remaining places in South Africa where RROs are still issuing permits to newly arrived asylum seekers. The distance between Cape Town and Pretoria, the nearest RRO where he could apply for asylum, is nearly 1,500km.

“At the moment, I don’t have money to go to Pretoria or elsewhere,” said Jean Baptiste, whose involvement in a student group opposed to the Congolese government put his life in danger and forced him to flee the country.

“For newcomers, it’s a Catch-22 situation,” said Anthony Muteti, a community liaison officer with People Against Suffering, Oppression and Poverty (PASSOP). Together with the Scalabrini Centre of Cape Town, PASSOP has registered over 1,800 asylum seekers in situations like Jean Baptiste’s since Cape Town’s RRO moved locations in July 2012 and stopped accepting new asylum seeker applications. It seems likely there are many more who have not been counted.

Last July, soon after the RRO stopped assisting new arrivals, a high court judgement ruled in favour of the Scalabrini Centre’s urgent application to force the Department of Home Affairs to resume these services in Cape Town, pending a full review of the case.

In March of this year, another high court judgement found that the Department’s decision to close the Cape Town RRO to newcomers had been unlawful due to a lack of consultation with the Standing Committee on Refugee Affairs or with affected groups. The Department is appealing both the interim court order and the March judgement, which requires it to resume full services to asylum seekers and refugees, including new asylum applicants, by 1 July 2013.

The Scalabrini Centre has not opposed the Department’s leave to appeal on the condition that it be heard as soon as possible and that the Cape Town office assist asylum seekers with permits issued at other RROs around the country.

Marlize Ackermann, an advocacy officer with Scalabrini, told IRIN that in recent months, most such individuals have been told they cannot renew their permits in Cape Town, but must return to the office where they originally applied for asylum. Scalabrini has registered over 400 such individuals since January.

“Officially, they’re supposed to be assisted, but in reality permit holders are often refused further extensions of permits, and if it is extended, it’ll just be a 30 day permit to allow them time to get to Musina or wherever,” she said.

For many asylum seekers, especially those with large families or health problems, travelling a minimum of 1,500km every three to six months in order to extend their permits is simply not possible. They have no option but to allow their permits to expire, making them undocumented and liable to arrest and deportation.

"I barely get enough [money] to eat. I don't know how I'll find enough to go to Musina"

Deborah Mbela Momba, a mother of six from DRC, who was separated from her husband when fighting broke out in Goma last November, is facing this predicament as the six-month asylum seeker permits she obtained for herself and her children from the RRO in Musina are about to expire.

With assistance from the UN Refugee Agency (UNHCR), Momba travelled from Musina to Cape Town, where she had lived during a previous period of instability in DRC. Now, she and her children are staying with a friend in Mitchell’s Plain, and Momba is earning a small income from braiding hair.

“I barely get enough [money] to eat,” she told IRIN, speaking tearfully through a translator. “I don’t know how I’ll find enough to go to Musina.”

According to Ackermann, the police in Cape Town are aware of the situation and rarely arrest asylum seekers without permits. However, Muteti of PASSOP said Home Affairs officials regularly raid places where foreign nationals are known to live and work, arresting those without documents.

“They’re taken to Pollsmoor Prison and kept with violent criminals for up to 30 days,” he told IRIN.

Those who avoid arrest, struggle to access healthcare and education for their children, let alone jobs.

“Whenever I try to get piece work, they won’t take me cause I don’t have documents,” said Daniel Munyoro*, 23, from Zimbabwe. He arrived in Cape Town in March and has not been able to apply for asylum there. “It’s not even safe to walk around because the police might stop and ask me for papers. My buddy is giving me food and a place to sleep, but he keeps asking me when I’m going to start paying.”

Even for those asylum seekers registered in Cape Town, renewing their permits is not a simple matter, said Muteti. “The RRO is scaling down its services, and treatment of foreigners there is appalling. Sometimes you wait all day and don’t get served.”

He added that asylum seekers are often told to come to the RRO only on the day that their permits are due to expire. If they do not make it to the front of the queue on that day, they become liable for a R2,500 (US$266) fine. “If you can’t afford to pay, you become undocumented, which means you’ll probably lose your job, the banks will freeze your account and you can be arrested,” he said.

Asylum seekers in Cape Town are not the only ones struggling to get documented. The Department of Home Affairs has also closed RROs in Johannesburg and Port Elizabeth in the Eastern Cape Province in the last two years, ostensibly because of complaints from local business owners. In both cases, courts have ruled that the closures were unlawful. The Eastern Cape High Court ordered the Department to re-open the Port Elizabeth RRO to newcomers last February, but so far it has not done so.

On several occasions in the past year, department officials have stated that the closure of RROs in metropolitan areas is in line with a strategy to eventually relocate all RROs to the country’s borders. Details have been sketchy, but a December 2012 statement by Home Affairs Director-General Mkuseli Apleni said the first of these RROs was under construction at the border with Mozambique, in Lebombo, although he did not give a timeframe for when it would be completed.

Refugee rights organizations, such as Lawyers for Human Rights (LHR), have been critical of the Department’s plan to move RROs to the borders, particularly without having first introduced it as a policy that would have required inputs at the Parliamentary and Cabinet levels as well as extensive public consultation.

Head of LHR’s Strategic Litigation Unit, David Cote, said there were fears that the move to the borders would have negative implications for asylum seekers. “We’re really concerned that it would create de-facto refugee camps [at the borders],” he told IRIN.

Muteti of PASSOP is among many in South Africa’s refugee rights sector who have registered a major shift in the South African government’s approach to asylum seeker and refugee protection in recent years. “Being a refugee myself, I’ve been through the mill,” he said. “But there are serious problems affected asylum seekers now.” 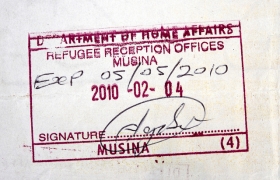