IRIN's funding comes from a mix of governments, foundations, international organizations and more. Current partners include:

The Bill & Melinda Gates Foundation, guided by the belief that every life has equal value, is working to help people lead healthy, productive lives, focused on health, poverty, and opportunity. Based in Seattle, the foundation supports work in more than 100 countries.

The Loterie Romande is the lottery operating in Switzerland's six French-speaking cantons (Vaud, Fribourg, Valais, Neuchâtel, Geneva and Jura). Its profits are entirely devoted to the support of public utility institutions. Thousands of institutions and non-profit associations benefit, directly or indirectly, from the contributions of the Loterie Romande.

The Open Society Foundations work to build vibrant and tolerant democracies whose governments are accountable to their citizens. Throught their work, they seek to strengthen the rule of law; respect for human rights, minorities, and a diversity of opinions; democratically elected governments; and a civil society that helps keep government power in check.

The New Venture Fund for Communications makes one-time, catalytic investments to raise awareness and increase knowledge around global health, hunger, and poverty. The ultimate intent of the investment strategy is to support decision-makers and targeted audiences in their efforts to engage with and address these issues.

Switzerland's Federal Department of Foreign Affairs forms and coordinates Swiss foreign policy on behalf of the Federal Council, pursues foreign policy objectives, safeguards the interests of Switzerland and promotes Swiss values. Through its foreign policy, Switzerland plays its part in alleviating need and poverty in the world, while promoting respect for human rights and democracy, and contributing to the peaceful coexistence of peoples and the conservation of natural resources.

Sida is a government agency working on behalf of the Swedish parliament and government, with the mission to reduce poverty in the world. Through their work and in cooperation with others, Sida contributes to implementing Sweden’s Policy for Global Development (PGU).

Australia's Department of Foreign Affairs and Trade is responsible for leading the Australian Government’s response to international humanitarian crises. Their policy is designed to save lives, alleviate suffering and maintain human dignity during and in the aftermath of conflict, disasters and other humanitarian crises, as well as to prevent and strengthen preparedness for the occurrence of such situations.

The government of Belgium's Directorate-general for Development Cooperation and Humanitarian Aid works with its partners to construct a just, fair and sustainable world in which each person can live in peace, safety and freedom and protected from poverty; to remain a leading stakeholder by subscribing to the international agenda for development cooperation and be an effective stakeholder focused on results-based action; and to appropriately and proactively manage human potential in order to improve staff fulfilment and commitment.

An important part of Norwegian foreign and international development policy is concerned with saving lives, alleviating suffering and protecting civilians affected by war and conflict. Norwegian humanitarian efforts are focused on countries where there are great, unmet humanitarian needs, where Norway is particularly well placed to make a contribution, or where the measures concerned support peace and reconciliation processes.

The Open Society Initiative for West Africa is active in 10 countries in the region and focuses on law, justice and human rights, and economic and political governance. The initiative pursues the development of open societies by supporting and building partnerships with local and regional groups that promote inclusive democratic governance, transparency and accountability, and active citizenship.

Through its Service de la Solidarité Internationale, the state of Geneva strives to promote sustainable development in order to contribute to the fight against poverty in less developed nations and to take action to tackle socio-economic inequalities, discrimination and exclusion. 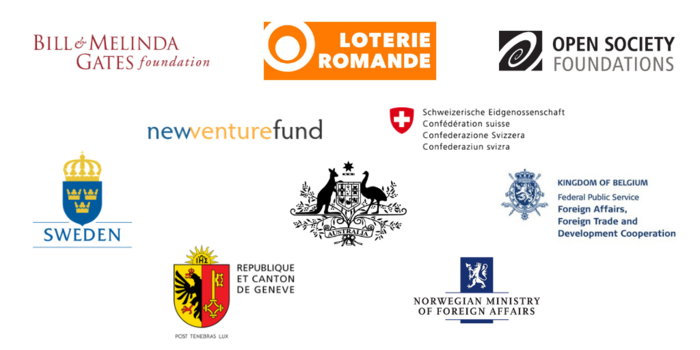