Nurul Islam feels the pain every time he sits: it’s a reminder of the sexual violence the Rohingya man endured when he fled Myanmar two years ago.

Nurul, a refugee, says he was raped and tortured by Myanmar soldiers during the military purge that ousted more than 700,000 Rohingya from Rakhine State starting in August 2017.

“They put me like a dog,” Nurul said, acting out the attack by bowing toward the ground, black tarp sheets lining the bamboo tent around him.

Nurul, 40, is one of the uncounted male survivors of sexual violence now living in Bangladesh’s cramped refugee camps.

Rights groups and aid agencies have documented widespread sexual violence against women and girls as part of the Rohingya purge. UN investigators say the scale of Myanmar military sexual violence was so severe that it amounts to evidence of “genocidal intent to destroy the Rohingya population” in and of itself.

But boys and men like Nurul were also victims. Researchers who study sexual violence in crises say the needs of male survivors have largely been overlooked and neglected by humanitarian programmes in Bangladesh’s refugee camps.

“There’s a striking division between aid workers and the refugees,” said Sarah Chynoweth, a researcher who has studied male survivors of sexual violence in emergencies around the world, including the Rohingya camps. “Many aid workers say we haven’t heard about it, but the refugees are well aware of it.”

A report she authored for the Women’s Refugee Commission, a research organisation that advocates for improvements on gender issues in humanitarian responses, calls for aid groups in Bangladesh to boost services for all survivors of sexual violence – recognising that men and boys need help, in addition to women and girls.

Read more: How many refugees are affected by sexual violence?

Mortality and health surveys by Médecins sans Frontières estimate that 3.3 percent of all Rohingya women and girls who reached Bangladesh in the month following the August 2017 purge witnessed or experienced sexual violence. The same research estimated that 2.1 percent of men and boys had witnessed or experienced sexual violence.

Estimates for sexual violence are generally seen as undercounts due to stigmatisation and, in the case of the MSF report, because ”whole households were not surveyed because there were no survivors”.

In focus group discussions with 89 Rohingya men and boys, one third personally knew a Rohingya man or boy who had directly experienced conflict-related sexual violence in Myanmar. In addition to rape and genital torture, this also includes the forced witnessing of sexual violence against close relatives.

An August report by the UN Fact-finding Mission on Myanmar, tasked with probing rights violations across the country, said the Myanmar military “routinely and systematically employed rape, gang rape and other violent and forced sexual acts” against women, girls, men, boys, and transgender people.

Rights groups say services for all survivors of gender-based violence are “grossly inadequate” and underfunded across the camps – including care for people attacked in the exodus from Myanmar, as well as abuse that happens in Bangladesh’s city-sized refugee camps.

Stigma often prevents Rohingya men and boys from speaking up, while many aid groups aren’t asking the right questions to find out.

But there are even fewer services offering male victims like Nurul specialised counselling and healthcare.

Chynoweth and others who work on the issue say stigma often prevents Rohingya men and boys from speaking up, while many aid groups aren’t asking the right questions to find out – leaving humanitarian groups with scarce data to plan a better response, and male survivors of sexual violence with little help.

In interviews with organisations working on gender-based violence, health, and mental health in the camps, aid staff told The New Humanitarian that the needs of male rape survivors have rarely been discussed, or that specialised services were unnecessary.

Mercy Lwambi, women protection and empowerment coordinator at the International Rescue Committee, said focusing on female survivors of gender-based violence is not intended to exclude men.

“What we do is just evidence-informed,” she said. “We have evidence to show it's for the most part women and girls who are affected by sexual violence. The numbers of male survivors are usually low.”

But according to gender-based violence case management guidelines compiled by organisations including the IRC, services should be in place for all survivors of sexual violence, with or without incident data.

And in the camps, Rohingya refugees know that male survivors exist. 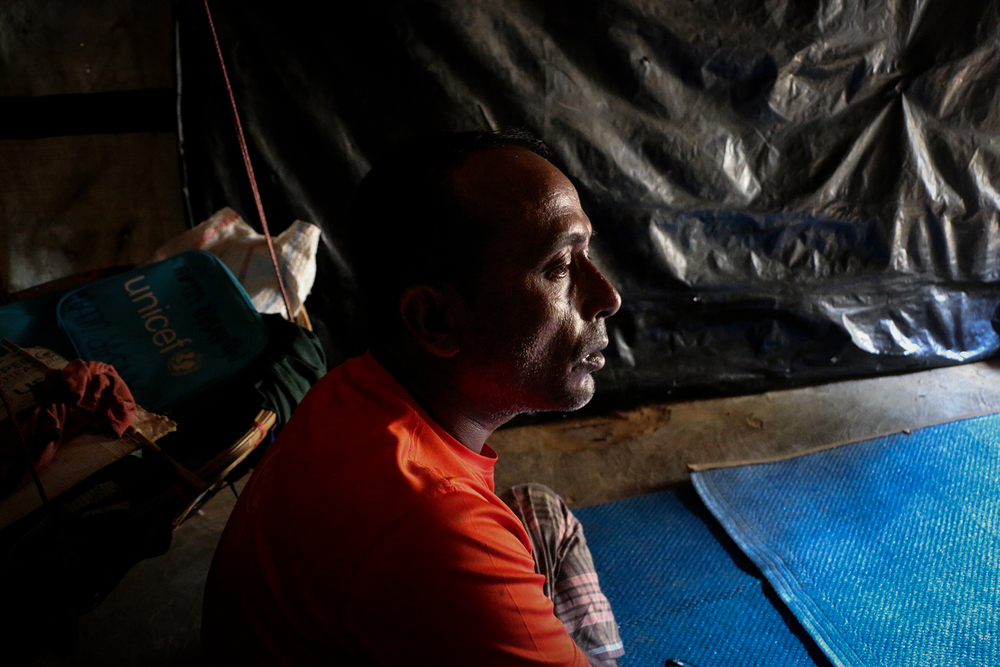 Verena Hölzl/TNH
Nurul Islam, 40, says he was raped by Myanmar soldiers in 2017. He didn’t tell doctors about his assault when he sought treatment in Bangladesh’s refugee camps.

TNH spoke with dozens of Rohingya refugees, asking about the issue of ”torture against private parts of men”. Over the course of a week, TNH met 21 Rohingya who said they were affected, knew other people who were, or said they witnessed it themselves.

When fellow refugees reached out to Nurul on behalf of TNH, he decided to share his experiences as a survivor of sexual violence: “Because it happened to men too,” he said.

After his attack in Myanmar, Nurul said other Rohingya men dragged him across the border to Bangladesh’s camps. When he went to a health clinic, the doctors handed him painkillers. There were no questions about his injury, and he didn’t offer an explanation.

“I was too ashamed to tell them what had happened,” he said.

When TNH met him in June, Nurul said he hadn’t received any counselling or care for his abuse.

But Chynoweth says the problem is more complicated than men being reluctant to out themselves as rape victims, or aid workers simply not acknowledging the severity of sexual violence against men and boys.

She believes it’s also a question of language.

When Chynoweth last year started asking refugees if they knew of men who had been raped or sexually abused, most at first said no. When she left out the words “sexual” and “rape” and instead asked if “torture” was done against their "private parts", people opened up.

“Many men have no idea that what happened to them is sexual violence,” she said.

Similarly, when she asked NGO workers in Bangladesh if they had encountered sexual violence against Rohingya men, many would shake their heads. “As soon as I asked if they had treated men with genital trauma, the answer was: ‘Yes, of course,’” she said.

This suggests that health workers must be better trained to ask the right questions and to spot signs of abuse, Chynoweth said.

The undercounting of sexual violence against men has long been a problem in humanitarian responses.

A December 2013 report by the Office of the Special Representative of the UN Secretary-General on Sexual Violence in Conflict notes that sexual and gender-based violence is often seen as a women’s issue, yet “the disparity between levels of conflict-related sexual violence against women and levels against men is rarely as dramatic as one might expect”.

A Security Council resolution this year formally recognised that sexual violence in conflict also targets men and boys; Human Rights Watch called it “an important step in challenging the taboos that keep men from reporting their experiences and deny the survivors the assistance they need”.

But in the Rohingya refugee camps, the issue still flies under the radar.

Mwajuma Msangi from the UN Population Fund, which chairs the gender-based violence subsector for aid groups in the camps, said sexual violence against men and boys is usually only raised, if at all, during the “any other business” section that ends bimonthly coordination meetings.

“It hasn’t really come up,” Msangi said in an interview. “It’s good you are bringing this up, we should definitely look into it.”

TNH asked staff from other major aid groups about the issue, including the UN’s refugee agency UNHCR, which co-manages UN and NGO efforts in the camps, and the World Health Organisation, which leads the health sector. There were few programmes training staff on how to work with male survivors of sexual violence, or offering specialised healthcare or counselling.

“The [gender-based violence] sector has not been very proactive in training health workers to be honest,” said Donald Sonne Kazungu, Médecins Sans Frontières’ medical coordinator in Cox’s Bazar. “I don’t hear people talk about sexual violence against men. But this is also not specific to this response.”

No data, no response

For the few organisations that work with male survivors of sexual violence in the camps, the failure to assess the extent of the problem is part of a cycle that prevents solutions.

"The NGO world doesn't acknowledge that it happened because there is no data, and there is no data because nobody is asking for it,” said Eva Buzo, country director for Legal Action Worldwide, a European NGO that offers legal support to people in crises, including a women’s organisation in the camps, Shanti Mohila.

LAW trains NGO medical staff and outreach workers, teaching them to be aware of signs of abuse among male survivors. It’s also trying to solidify a system through which men and boys can be referred for help. Through the first half of the year, the organisation has interacted with 25 men.

"It's really hardly a groundbreaking project, but unfortunately it is,” Buzo said, shrugging her shoulders. “Nobody else is paying attention.”

But she’s reluctant to advertise her programme in the camps: there aren’t enough services where male victims of sexual violence can access specialised health and psychological care. Buzo said she trusts two doctors that work specifically with male survivors; both were trained by her organisation.

“It’s shocking how ill-equipped the sector is,” she said, frustrated about her dilemma. “If we identify new survivors, I don't even know where to refer them to.”

The issue also underscores a larger debate in the humanitarian sector about whether gender-based violence programmes should focus primarily on women and girls, who face added risks in crises, or also better include men, boys, and the LGBTI community.

“If we identify new survivors, I don't even know where to refer them to.”

Buzo says the lack of services for male survivors in the Rohingya camps points to a reluctance to recognise the need for action out of fear it might come at the expense of services for women – which already suffer from funding shortfalls.

The Rohingya response could have been a precedent for the humanitarian sector as a whole to better respond to male survivors of sexual violence, according to an aid worker who worked on protection issues in the camps in 2017 as the massive refugee outflow was unfolding.

When she questioned incoming refugees about sexual violence against women, numerous Rohingya asked what could be done for men who had also been raped, said the aid worker, who asked not to be named as she didn’t have permission to speak on behalf of her organisation.

“We missed yet another chance to open this issue up,” she said.

Chynoweth believes health, protection, and counselling programmes for all survivors – female and male – must improve.

“There aren’t many services for women and girls. The response to all survivors is really poor,” she said. “But we should, and we can do both.”

(TOP PHOTO: Rohingya refugees at the Kutupalong refugee camp in Ukhia on 25 August 2019.)