This article is part of our in-depth coverage. Read more like this...
Over the past six months, IRIN has intermittently followed life in the herding communities of the drought-stricken Sahel region. This is the first in a three-part series on those herders and their families, who are coping with the impact of the worst ‘lean season’ in years. Read part two here, and part three here.
NAMAREL/Senegal

Saidou Harouna Ba surveys what's left of his only source of income: his animal herd. “If I’d stayed at home, they would all be dead,” he says. As it is, the 46-year-old Fulani herder returned to his village in Senegal’s northern Podor County after 10 months away with just half the number of sheep, cattle, and donkeys he set out with.

Losing half the herd means Saidou lost half his wealth. A year ago, he was not badly off, able to comfortably support his family. Now, because of the toll climate change has taken, coupled with a government ill-equipped to deal with the fallout, he’s bordering on poverty.

This week, the Intergovernmental Panel on Climate Change warned that an increase in global warming will adversely affect livestock and crop production, particularly in sub-Saharan Africa. But herders like Saidou have already seen increasingly unpredictable weather patterns, drought, floods, and land degradation threaten their way of life.

Six million people in the Sahel faced severe food shortages in a prolonged lean season between January and August this year; Senegal was one of the three worst affected countries in the region. It may get worse yet, as the UN’s Food and Agriculture Organization (FAO) estimates that 2.5 million livestock herders, or “pastoralists,” and those who raise both livestock and crops in the Sahel risk losing their income.

As soon as the rainy season ended last September, it became clear that erratic rainfall had led to diminished pasture across the Sahel. This forced northern herders like Saidou, who normally begin travelling south in January or February, to embark on their annual journey up to four months early, and in far greater numbers than usual.

Seasonal migration – which helps over-grazed regions recover by temporarily shifting the burden to areas with more pasture – is common for the Fulani, one of the Sahel’s largest ethnic groups. But as the length of the migration period and the distance herders are forced to travel to find food and water for their livestock increases, their economic well-being and very way of life are at risk.

Life in pastoral communities revolves around their main source of financial capital: the herd. So when animals are placed under stress, the social fabric also suffers. “Food security is above all assured by the security of the herd,” says Aliou Samba Ba, president of the Senegalese branch of the Réseau Billital Maroobé (RBM), a network of pastoralist associations in West Africa.

On the road, children accompanying their herder parents miss school, while animals die because of the rise in diseases. At home, people are hungry and increasingly worried about the waning value of the little that they own. 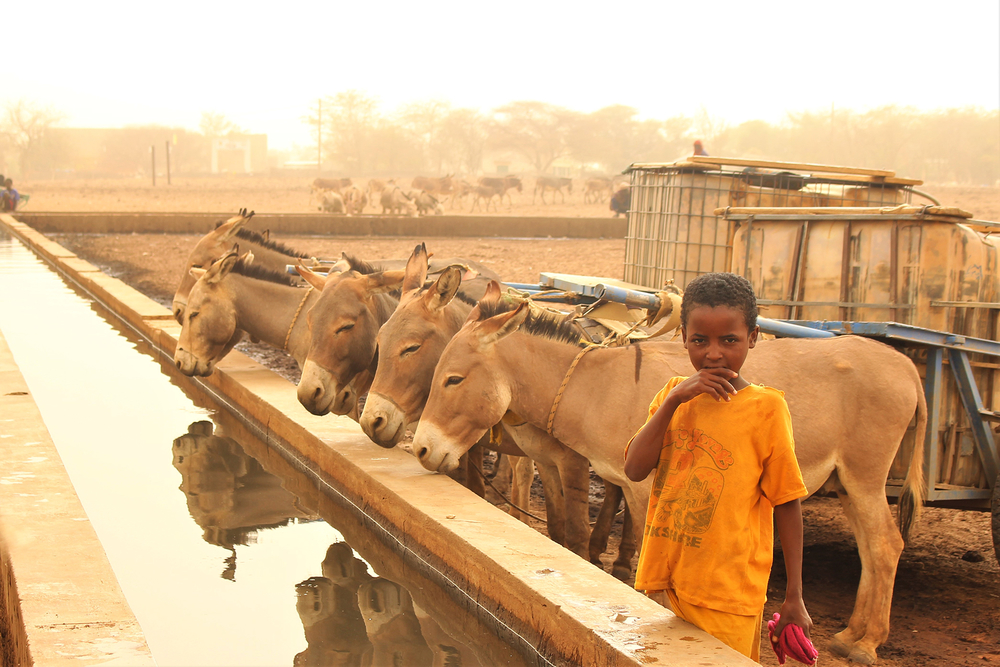 Lucinda Rouse/IRIN
Skinny cattle and donkeys drink from the borehole in the town of Ranerou, which hosts thousands of herders and their livestock during the dry season.

“If there was good rain, all of our problems would be solved,” says Saidou. This isn’t looking likely: in the Sahel, the gaps between the hardship years are getting smaller and weather conditions are becoming more extreme.

IRIN first met Saidou in March in Ranerou, a small town in the northeastern Matam region. Accompanied by his wife and their two youngest children, it had taken him 10 days on foot to travel the 200 kilometres south from his village of Namarel with a herd of several hundred animals.

Thousands of herders and their livestock spend the dry season in Ranerou every year. But this time was different. Saidou had to station the animals 10 kilometres out of town, where a meagre supply of grass could be found. But with the route between their camp and the town barren and devoid of vegetation, they could only make the journey to Ranerou’s borehole to drink every few days. The animals stopped producing milk, a key nutritional staple for the family. 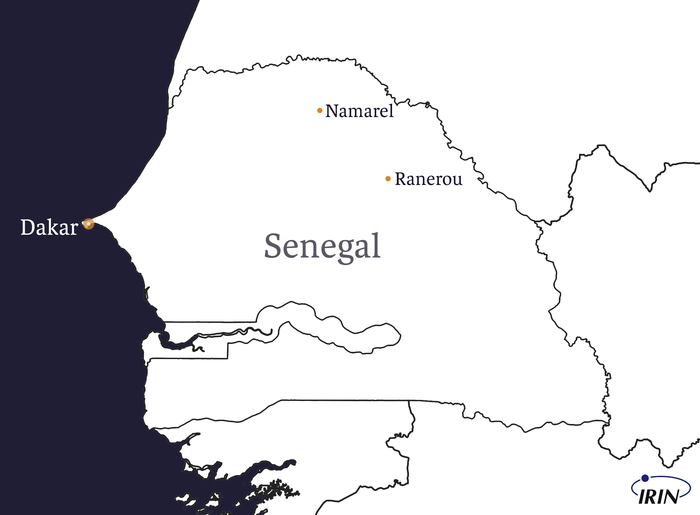 In the last five years, some areas in Senegal have reported decreases of between 50 and 100 percent in crops and grazing areas. This led to a spike in the demand for manufactured animal feed this year, which sent prices skyrocketing. A 40 kg sack of feed that cost around 7,000 CFA ($12) in October 2017 had risen to 13,000 CFA ($23) by March. Herders had to sell off animals to buy feed to sustain the rest of their herds, leaving a severe dent in their wealth.

Meanwhile, a government fund set up in 2012 to subsidise animal feed was not sufficiently replenished. The last cash injection was in 2015, and since herders tapped the fund in 2016 and 2017, subsidies weren’t available at the same level this year. “The state did not have the means to put in place a livestock safeguarding operation,” says Abba Leye Sall, the head of Animal Sectors at the Ministry of Livestock.

In addition, livestock prices plummeted due to desperate herders bringing large numbers of animals to market. Cattle, sheep, and goats fetched half the price they had four months earlier; by March in Ranerou, a sack of feed cost more than a sheep.

“Next time, I’d sell more animals in advance for a better price and buy a stock of feed while the price was still stable,” says Sidy Samba Ba, also from Namarel. This year he travelled some 100 kilometres further south than Saidou and suffered similar losses.

But it’s difficult to predict the conditions of the season ahead, and with donkey-drawn carts as the primary means of transport, carrying large stocks of feed presents logistical difficulties.

As the year went on, herds intermingled around scarce water supplies and the incidence of disease rose. Foot-and-mouth disease killed young animals and slowed the pace of already weak herds forced to hobble long distances in search of sustenance.

Then on 27 June, Senegal’s first rains came, accompanied by an unseasonably cold wind. Tens of thousands of animals died in the space of a day as the long-awaited rains became a killer. Some herders lost everything.

When the herd is happy, the people are happy

Children were among the first to suffer. Many accompanied their parents on the journey south to help with the herd or because no one was left at home to care for them. For those who ordinarily attended school, this meant missing an academic year. Healthcare was non-existent when they became ill camping under tarpaulin sheets. “Social services are not adapted to mobility,” observes Noël Marie Zagré, regional nutrition adviser at UNICEF, the UN’s agency for children.

“For 10 months, we rarely ate meat or vegetables.”

For the few who stayed at home, life also changed. “The society changed,” says Mariam Harouna Ba, who remained in Namarel. “It was very difficult, especially for children and pregnant women who were really hungry because there was no milk.”

This was a serious concern in a region already experiencing high rates of malnutrition. Vehicles connecting remote villages like Namarel to market towns such as Ndioum became few and far between as transporters followed the herders. It was hard to source fish or vegetables, while meat prices increased in areas with no animals left.

When the family at home requested money, herders needed to sell yet another animal, for an ever decreasing price. The main meal of the day was reduced to a bowl of rice seasoned with a stock cube. “For 10 months, we rarely ate meat or vegetables,” says Mariam.

Traders also saw a dip in sales, and many shut up shop during the migration period. Aly Amadou Diop runs a homeware store in the town of Ndioum that remained open. “I haven’t made a profit this year,” he says, surrounded by stacks of foam mattresses and plastic-wrapped crockery. Between October 2017 and August 2018, sales would rarely exceed 25,000 CFA ($44) per day, down from an average of 500,000 CFA ($880). “I don’t want to leave Ndioum,” he continues, “but if there’s another year like this I’ll be forced to look at other options abroad.”

In parts of Senegal that hosted the migrants, business improved and many traders followed the herders south. But already scarce natural resources in host regions were placed under extreme strain. According to Kalidou Ba, secretary general of a local agro-pastoralist association, the region could have easily supported the resident herds in Ranerou-Ferlo County if the northern migrants had not moved in. Instead, livestock in host regions were forced to move southwards as the demand for water and pasture increased.

Since the host regions are also home to crop farmers, concerns rose that the early influx of livestock could damage crops. Fortunately in Senegal, the use of pastoral corridors kept herders on pre-agreed routes. But in other countries in the region the unseasonal presence of animals added fuel to existing inter-communal conflicts. 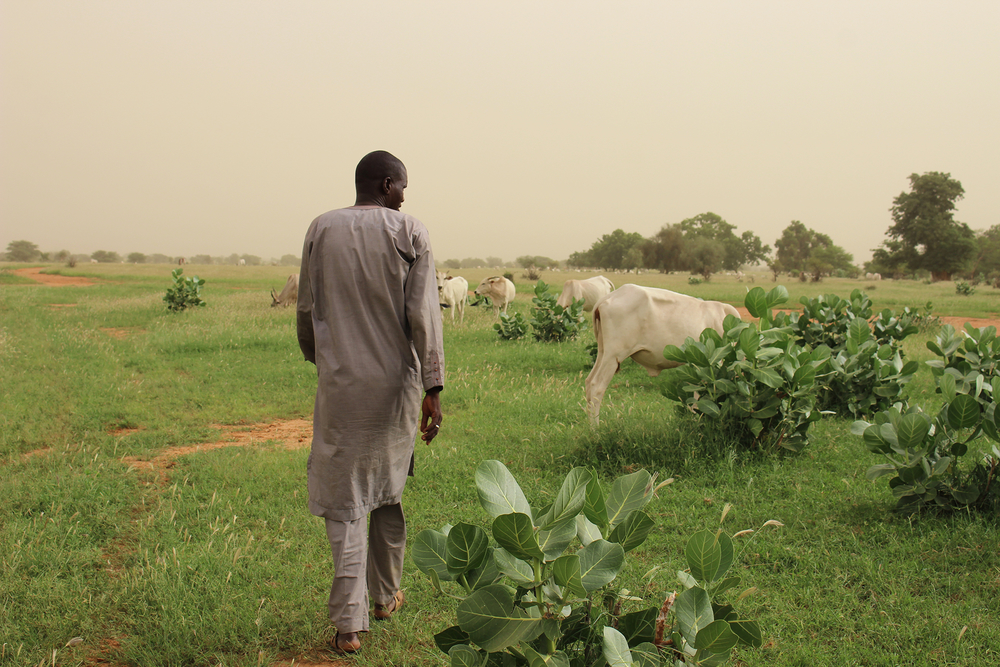 Back home, but still insecure

Six months after Saidou’s return to Namarel, he’s at home surrounded by lush green pasture following much-needed rains. Cows and goats mooch around the yard in easy co-existence with his family, occasionally shooed benignly as they chew the edges of straw mats.

“One bushfire could destroy everything.”

Saidou appears more relaxed than he had in dusty Ranerou. Although he is heavy-hearted from the toll of the long migration and seeing so many of his animals perish, he says he is relieved to have found a good pasture on his return in August.

“I’m happy, because I left to save my animals,” he says. “Even though I couldn’t save them all, I saved a part.”

In Namarel today, animals graze in abundant pasture and many herders are hopeful that they won’t need to make the journey south next year.

But even this year, another threat still looms: bushfires, which typically begin in late October when the lush grass from the rainy season turns yellow.

As the RBM’s Aliou Samba Ba warns:  “One bushfire could destroy everything.”

(TOP PHOTO: By March, the cost of a sack of animal feed exceeded the price of a sheep in Ranerou. CREDIT: Lucinda Rouse/IRIN)