Sinjar, in northeast Iraq, made headlines for the 2014 massacre, enslavement, and displacement of its Yazidi people by militants from the so-called Islamic State. Thousands have since returned to the shattered town, but they are struggling with a lack of basic services, especially medical care.

Patients queue in a dingy corridor in what is left of Sinjar General Hospital to see 27-year-old Hussein Rashu, who was until recently its sole doctor. Hundreds of Yazidis seek treatment here every week, many suffering from complaints induced by ongoing shortages of food, clean drinking water, electricity and heating, and from living in makeshift accommodations.

“I see everyone – men, women, and children – and deal with all [sorts of] cases because there’s no one else,” explained Doctor Rashu, who qualified in 2014 and can offer only the most basic diagnoses and prescriptions.

This part of the hospital, which once boasted 100 beds and several departments, is one of only two wards that survived IS control of Sinjar, which began in August 2014, when tens of thousands of Yazidis were forced to seek refuge in the nearby mountains.

After massacring more than 1,500 Yazidis and kidnapping another 1,500 women and children as part of a campaign the UN has called genocide, the militants then unleashed destruction on Sinjar. Airstrikes and on-the-ground combat damaged much of what remained of the town, as Yazidi and Kurdish forces fought to regain control of it.

Sinjar and its surrounding villages are the historic refuge of the Yazidis, a long-persecuted Iraqi minority that was singled out by IS for especially cruel treatment. Since liberation in November 2015, more than 4,000 Yazidi families have come back, an estimated 20,000 to 25,000 people in all. They have returned to a homeland in need of extensive reconstruction.

Mayor Ferhad Hiamd says that while returnees need housing, food, and clothing, medical care is the most pressing necessity. “We need urgent help here in Sinjar,” he told IRIN. “We need everything, but the healthcare situation is particularly critical.”

But according to local officials, health workers, and the inhabitants themselves, scant aid has been provided by either the Iraqi government or the Kurdistan Regional Government (which claimed the area as part of its territory until Iraqi forces took control last October). They also accuse UN agencies and major international non-governmental organisations of largely overlooking the town and the scale of its needs. 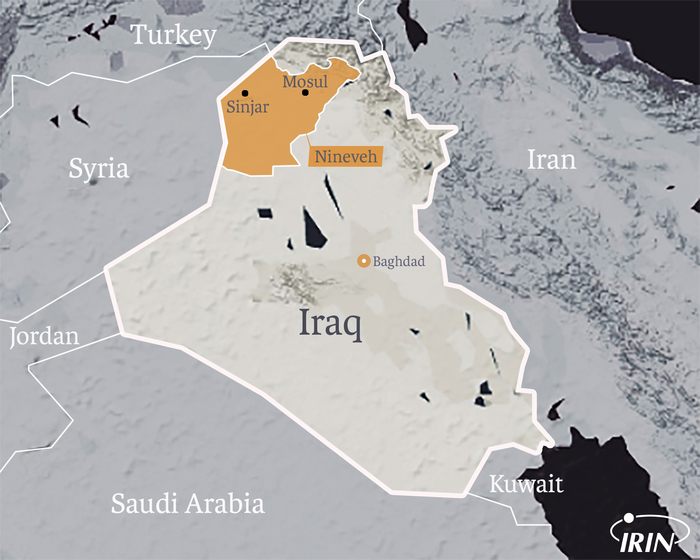 As one frustrated hospital volunteer, speaking on condition of anonymity, said: “While the foreign NGO employees are sitting comfortably in the Green Zone in Baghdad or luxury hotels in Erbil, our people are dying here in Sinjar.”

The desperate need for medical care is exacerbated by the poor living conditions in Sinjar: most returnees live in informal camps, damaged buildings, or rural areas far from the hospital and the one other healthcare centre, which has no doctor and even less to offer patients.

The lack of medical care, as well as shortages of just about everything, makes the prospects of further returns to Sinjar more distant.

Most of the area’s estimated 250,000 Yazidis remain in refugee camps scattered around Iraqi Kurdistan, Syria, and Turkey. Others have sought asylum in Europe. Sinjar’s Arab and Kurdish populations have also not come home.

Iraqi Prime Minister Haidar al-Abadi told IRIN the government was keen for all members of the Yazidi community to return to Sinjar but that the area had been badly damaged and needed extensive support and rebuilding.

“We have been talking to the international community and they show interest in Sinjar, but actual support is very slow,” he said.

Over this long, harsh winter, so many people sought treatment at the hospital that Doctor Rashu and pharmacist Mourad Khro Mourad lived on site, often working throughout the night.

Mourad said chronic diseases routinely go untreated for lack of medication. NGOs and the health department of Nineveh, the province in which Sinjar sits, do provide some medications, but not enough, he said.

The two work with only six beds, one toilet used by around 150 people a day, and almost no equipment. Doctor Rashu said he eventually needs to refer most patients to better-equipped hospitals in Dohuk or Mosul, some 170 kilometres and 130 kilometres away by road, respectively.

But many patients cannot afford to make the trip, he added, and others are too scared to go to Mosul, a former IS stronghold where many Yazidis had been enslaved.

The most urgent cases require swift transfers to other facilities, but Sinjar has no functional ambulances.

Hospital staff say two new ambulances were promised in December by the Nineveh health department – which did not respond to IRIN’s request for comment – but these have still not been delivered.

“While the foreign NGO employees are sitting comfortably in the Green Zone in Baghdad or luxury hotels in Erbil, our people are dying here in Sinjar.”

This means every emergency case is complicated, and often needs to involve the armed forces controlling Sinjar. These include the Iraqi army, Yazidi units, and a coalition of mostly Shia militias forces known as the Hashd al-Shaabi (Popular Mobilisation Units).

In early March, three babies suffering from suspected pneumonia needed to be urgently transferred while hooked up to oxygen. Hospital staff had to ask Hashd al-Shaabi forces to take the babies – aged three, five, and six months – to Mosul by military ambulance.

The forces agreed, but the ambulances were not equipped to give the babies oxygen en route. Concerned the babies would not survive the two-and-a-half hour journey to Mosul, they had to first make a detour to a field hospital to get them hooked up.

Doctor Rashu admits it’s not ideal to mix civilian medical care with military operations, and notes that some Yazidis are too afraid to get into the ambulances.

“It’s not the right way to do things, but we literally have no other choice when faced with patients in a life or death situation,” he said. “I am a doctor, and it is my duty to do whatever I can to try and save patients’ lives.”

While these transfers are dangerously complex and can be difficult to arrange, saving lives in Sinjar itself remains nearly impossible.

Hospital staff say at least 11 people have died in the last six months because of lack of medication, ambulances, medical equipment, and resources.

“Sinjar is being completely ignored,” Doctor Rashu said, and mayor Hiamd agreed, adding: “We urge the government and NGOs to recognise the desperate situation here and urgently prioritise helping the people of Sinjar.”

Until a few weeks ago, Sinjar General Hospital received 270-300 patients daily, even with its limited resources.

Those numbers have since halved, officials say, after the Iraqi government introduced new charges for hospital visits and prescriptions at public hospitals.

Doctor Rashu said that while he understands the new system is countrywide, he can’t see “why the Iraqi government activated it here in Sinjar, where people are very, very poor.”

Mourad, the pharmacist, has already seen the impact of the new costs. He recalled a recent case of a mother and three children, all suffering from influenza. She had only 3,000 Iraqi dinars, so paid for her sickest child to be seen while she and the other two children went without examination or medicine. 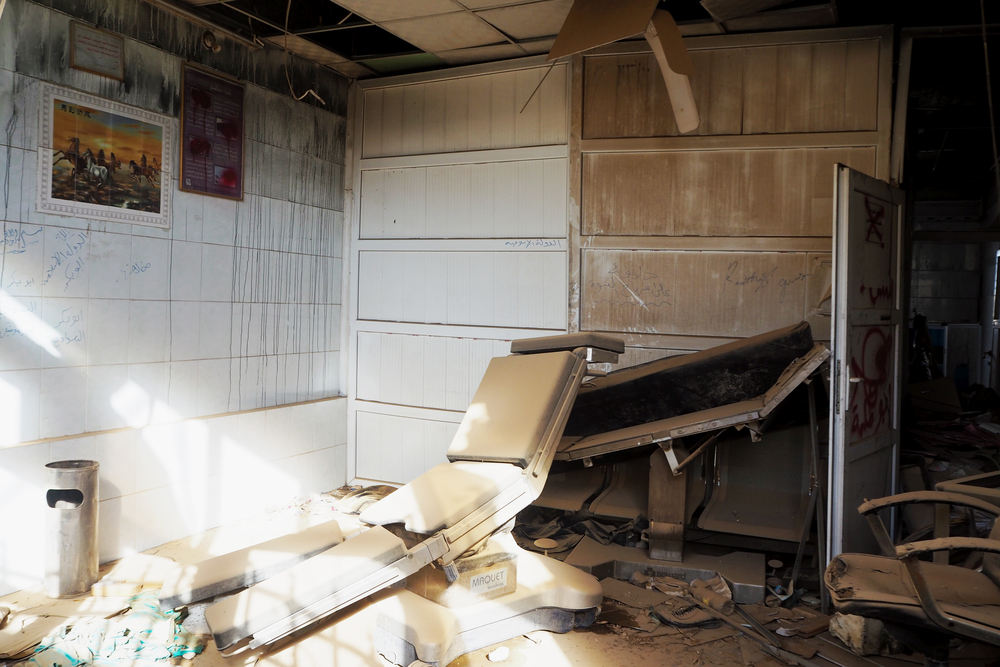 Where is the help?

Hospital staff were critical of international NGOs and aid agencies, who they said had done little to help Sinjar, apart from make visits, carry out assessments, and make promises that rarely materialised into practical help.

“We ask them, please, get in your cars and come to Sinjar yourselves to see the reality of our situation,” said the hospital volunteer who asked to remain anonymous. “But, if you do come, please don’t make promises you cannot keep.”

René Nijenhuis, deputy head in Iraq of OCHA, the UN’s emergency aid coordination body, said the UN has 19 humanitarian partners currently providing assistance in Sinjar (including some in the health field), of which seven are international NGOs. The UN Development Programme has 38 projects in Sinjar, including four in the healthcare field, said a spokesman, Sam Kimball, who added that the rehabilitation of two primary healthcare facilities in the Sinjar region has been completed, while other projects remain “under implementation”.

But apart from a polio and measles vaccination programme funded by UNICEF, local medical staff say they have only seen a handful of NGOs operating on the ground in Sinjar. They include: MedAir, which runs a mobile clinic one morning a week to offer basic primary healthcare; the Dutch NGO Dorcas Aid International; and the British NGO Road to Peace.

In the last few weeks, Road to Peace has set up a basic paediatric unit in part of the Sinjar hospital formerly used as an IS base, according to the organisation’s director, Sally Becker. Demand to see the international paediatric specialists who stay for weeks at a time has been overwhelming, she says.

“Apart from MedAir and Dorcas, the only NGOs we’ve seen at the hospital are MSF [Médecins Sans Frontières],” said Becker. “In the meantime though, the people of Sinjar are desperate.”

MSF confirmed it was currently conducting an assessment in Sinjar “to gather information about the healthcare needs of children and adults living in the area, and how MSF can potentially respond.” 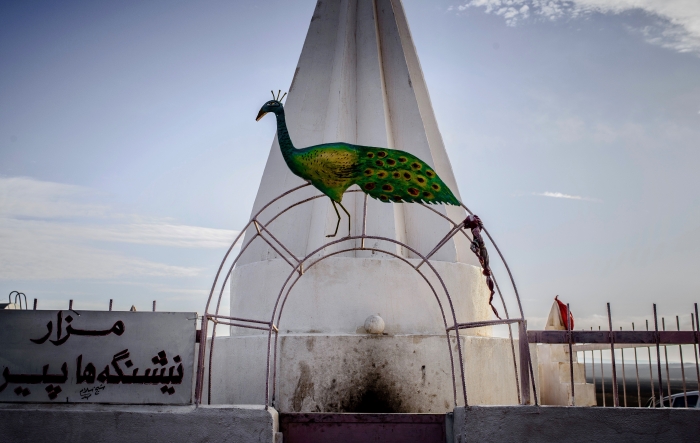 It isn’t always easy to access Sinjar, as NGOs need authorisation from Baghdad to visit or work in the area. One Western NGO told IRIN that getting approvals could be challenging and that, with several different military and civilian groups in control of the region, rules could arbitrarily change.

But the Norwegian Refugee Council, which conducted an assessment in December last year and is waiting for prospective donors to respond on funding requests for Sinjar-specific programmes, said that NGOs with authorisation from Iraq’s federal forces were able to access Sinjar.

In the meantime, those who have returned to Sinjar carry on as best they can.

Amshee, 50, was cleaning mats outside what she called a “borrowed” empty house her family had just moved in to. “We need everything here, really everything,” she said. “We have no food, no clean water, no money, no work, not even any spare clothes.”