Burkina Faso
Conflict
Migration
Editor's note: In a March article, TNH contributor Sam Mednick explored what a new law granting civilians power to fight extremists might mean for Burkina Faso. In the months that followed, she travelled to northern and eastern parts of the country to meet vigilante groups and interview civilians, who described a pattern of abuse by ill-disciplined fighters. Click here to read the original story.
KONGOUSSI, Burkina Faso

When Burkina Faso’s government called for civilians to fight against the jihadists terrorising their communities, Amadoum Tamboura was stirred to act. But the weapons the politicians promised never arrived, leaving the 56-year-old defenceless as militants attacked his village.

“We were told our mission was to protect our community. [But] you can’t use your bare hands,” said Tamboura, who fled along with hundreds of others and now lives in the northern town of Kongoussi.

Hundreds of civilians in towns and villages across extremist-hit parts of Burkina Faso have signed up to protect their communities and combat jihadist groups since a new law – known as the Volunteers for the Defence of the Homeland Act – passed through parliament in January.

The government, which wouldn’t provide a precise number of volunteers enrolled, had hoped the flagship initiative would bolster its demoralised army following waves of jihadist and inter-communal violence that have uprooted more than one million people – most since the beginning of last year.

But nine months into the programme, volunteers who were supposed to receive weapons and two weeks of training from the government told The New Humanitarian they were ill-equipped and often too afraid to fight the better-armed and battle-hardened militants.

And several residents who live in areas where the vigilante groups operate accused the men of abusive behaviour – from stealing cattle to attacking those accused of collaborating with the jihadist militants. Many also worry they will be attacked by the jihadists, if they are suspected of supporting the volunteers.

Last week, 25 displaced people travelling in a convoy back to their village were killed by extremists who cited the presence of volunteers in the area as a motive for the attack, according to several witnesses who spoke to TNH.

With presidential elections approaching next month, analysts and opposition candidates also warned that politicians may look to exploit the volunteer groups and other self-defence militias to increase their influence or undermine rivals.

“This law was supposed to bring security and stability,” said Flore Berger, a Sahel researcher and analyst. “But volunteers are both perpetrators and victims of violence, and civilians are trapped between attacks from all sides.” 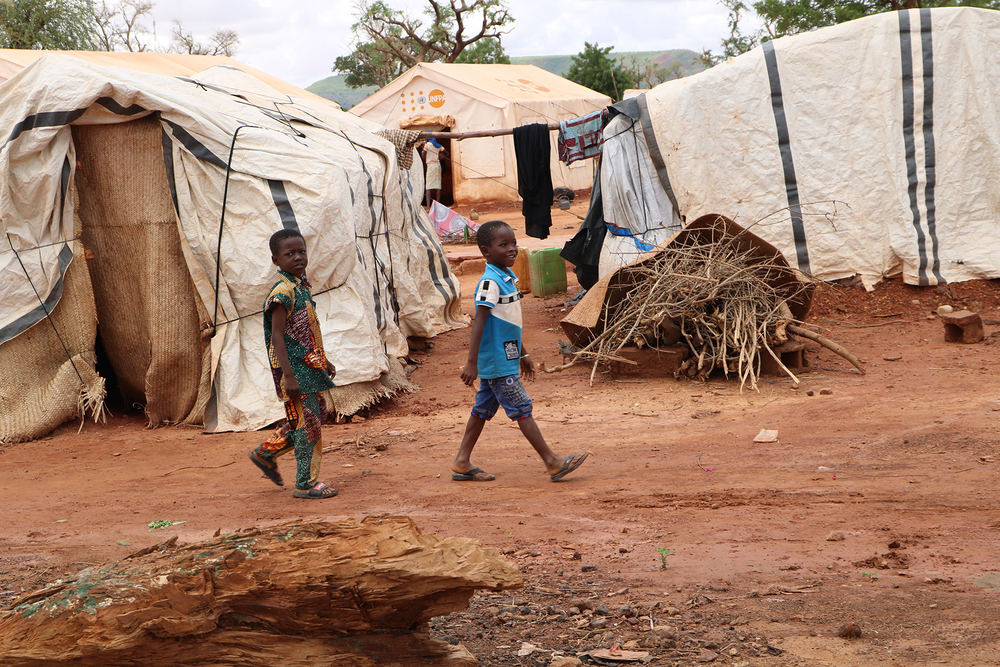 Sam Mednick/TNH
Children walk through a displacement camp in the northern town of Kongoussi. Residents of the camp said volunteer fighters were too weak to help them return to their villages.

The plan to recruit volunteers was announced last November after 37 civilians were killed in a jihadist attack on workers at a Canadian gold mining company in eastern Burkina Faso.

At the time, it was one of the deadliest attacks yet by jihadists, who began an insurgency in Burkina Faso’s arid north in 2016 and have since spread to the east and west, cutting off large parts of the country.

Government officials in Kongoussi said the volunteers have successfully prevented the extremists from attacking larger towns, and also credited them with helping to escort residents on risky roads, bringing them to their farms during the ongoing rainy season.

But the programme was rolled out in a rush, according to Heni Nsaibia, a researcher at the Armed Conflict Location and Event Data Project, or ACLED. He described it as “a low-cost… dubious alternative” to strengthening the army.

In Kongoussi – one of several northern and eastern towns where THN met volunteer groups – Tamboura and his band of seven other vigilantes said they were struggling to put up much resistance to the jihadists.

“How can the government think I have money to buy a rifle?”

Soldiers taught the men how to load guns, dig ditches, and protect themselves during clashes in a week of training. But the group had to bring their own rifles to the course, and subsequent promises of weapons never materialised.

The only arms the group currently has in its arsenal are two hunting rifles – one held together with sticky tape – a homemade wooden shotgun that takes a long time to load, and a three-inch table knife.

“How can the government think I have money to buy a rifle?” said Abdoulaye, a member of Tamboura’s group who asked for his surname to be withheld. “I’m turning to them to protect me and my community.”

The lack of training has left these volunteer groups vulnerable and exposed to jihadists. At least 40 attacks have been directed against them – including one on a vigilante headquarters in the north of the country – since February, according to ACLED.

In the eastern town of Natiaboani, three out of 20 volunteers have been killed this year, according to a local resident who asked not to be named. The resident said one man was targeted in his home immediately after enrolling.

The risk of jihadists collectively punishing communities where recruits assemble was thrown into sharp focus by last week’s attack on the convoy of displaced people, who were returning home after a year and a half absence.

Witnesses told TNH that men were separated from women and children, and then dragged away. “They told us that our husbands were trying to kill them,” said Wendpengda Ouedraogo, who was among the 21 women and children released by the jihadists.

According to ACLED data, more than half of the 19 attacks launched by volunteers since February have been against civilians – all from the country’s Fulani community, which is often accused of collaborating with the jihadists.

Analysts said these attacks – which have left dozens of Fulani dead – have worsened ethnic tensions between the cattle herding community and other non-Fulani groups whose members have enrolled as volunteers.

A 59-year-old from a village called Sam – 15 kilometres from Kongoussi – said volunteers lined four Fulani civilians up against a wall in February and shot them – killing two and injuring the others.

The volunteers then warned non-Fulani community members they would suffer the same fate if they visited Fulani towns, according to the 59-year-old, who did not witness the incident but said he spoke to one of the injured men afterwards.

“Fulani populations are systematically taken out of vehicles, checked, humiliated, tortured and sometimes killed for their ethnic appearance by the defence volunteers,” read a statement last week from the Collective Against Impunity and the Stigmatisation of Communities, a local rights group that campaigns against the abuse of Fulani.

Other community members – not just Fulani – say volunteers have stolen property and threatened them for no clear reason. A 65-year-old man, also from Sam, said a group demanded to search his house in February because they had seen men arrive on motorbikes the previous night and suspected they were jihadists.

“I was displaced initially by terrorists, but now I can’t go back because of volunteers.”

The 65-year-old said he explained that the men were his sons, but the volunteers told him he would suffer consequences if they saw anything suspicious again. “They didn’t directly say, ‘we’ll kill you’, but they said they don’t pity people or make exceptions for people they know,” the man said.

Though a jihadist attack in Sam forced the 65-year-old to flee to Kongoussi shorlty after the incident, he said volunteers are the main reason he hasn’t returned. Other Sam residents agreed: “I was displaced initially by terrorists, but now I can’t go back because of volunteers,” said one.

While the volunteer law stipulates that vigilantes should sit morality tests, and community members were told they would have a say in who gets chosen, Tamboura told TNH that he hand-picked his nine men because they were the bravest.

Other volunteers said members were nominated by community leaders, or chosen because they said they had mystical powers that help them fight. “Terrorists know that strong traditional customs in these villages are hard to defeat,” said one volunteer, who asked not to be named.

The volunteers are not the only vigilantes operating in Burkina Faso: A local defence militia called the Koglweogo has tens of thousands of members who primarily fight crime but often get dragged into scraps with jihadists. 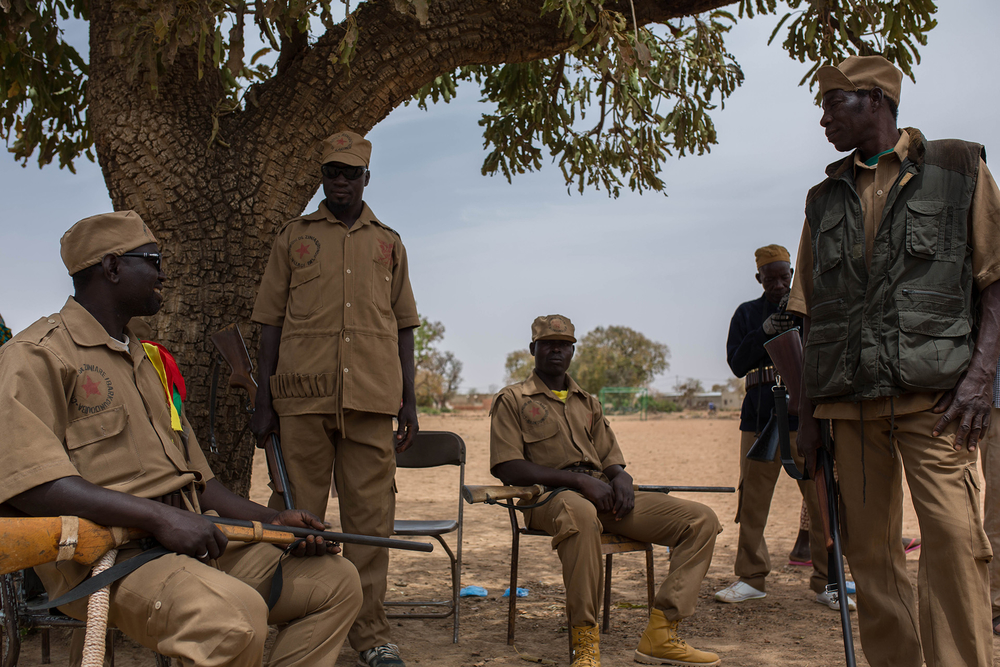 Philip Kleinfeld/TNH
The Koglweogo, one of a growing number of self-defence groups in Burkina Faso, is deployed to manage the crowd at a community gathering in the town of Ziniaré in March 2019.

A recent report from the Clingendael Institute, a think tank in The Hague, stated that politicians may be tempted to use these groups to secure electoral gains, particularly if the November polls are tightly contested and the result indecisive.

“In fragile settings like Burkina Faso, these groups are not immune from partisan politics and can easily morph into uncontrollable militias,” the report stated.

Opposition figures suggested the volunteers might favour the ruling party should they be approached, but those interviewed by TNH said they hadn’t spoken to politicians about the elections yet.

“The country’s leaders will pay the volunteers to vote for them and to round up others to vote as well,” said Boukary Kaboré, a prominent politician who is hoping to run for the presidency but struggling to get on the electoral list.

Rights groups also fear that government officials may choose to outsource even more work to the volunteers as the country’s security forces come under increased scrutiny for alleged abuses committed during counter-terrorism operations.

“We worry that the voluntary forces will end up acting as an unaccountable subcontracting proxy for the state and do the dirty work in their place," said Jonathan Pedneault, a researcher at Human Rights Watch.

Family members of volunteers called for more support from the government for their loved ones: “The situation isn’t fair,” said Adama Sayoré, whose 25-year-old son had never held a gun before joining the programme. “He can’t fight against terrorists.”