Take our short survey.
GOMA, The Democratic Republic of Congo

At a glance: Who's involved?

An attack on a church by suspected jihadists in northern Burkina Faso last month left at least 24 people dead in the latest outbreak of violence that has displaced more than 750,000 people in the West African nation – the vast majority since the beginning of last year.

Security analysts attribute the majority of attacks to jihadist groups linked to al-Qaeda and so-called Islamic State, but most acts of violence go unclaimed, while a patchwork of self-defence groups and poorly equipped soldiers are responsible for many abuses.

The insecurity has left displaced people in some rural parts of northern and eastern Burkina Faso outside the reach of aid groups – and a lack of clear information on which militants are operating where has made it difficult for humanitarians to negotiate access to affected people.

A new scheme to provide Burkinabe civilians with weapons to fight jihadists may add another layer of violence to an already volatile context, while French President Emmanuel Macron has pledged to send extra troops to fight militancy across the Sahel – which includes Mali and Niger.

Aid groups have criticised the region’s increased militarisation and called for more attention and funding for civilians – 2.2 million of whom are in need of life-saving humanitarian assistance this year in Burkina Faso. Sahel analysts say more attention needs to be given to the local grievances that have helped the jihadists expand.

As attacks escalate in Burkina Faso and humanitarian needs grow, here’s a list of who’s involved.

Homegrown jihadists and militants from neighbouring Mali began attacks in Burkina Faso in late 2015, and have progressively expanded to new fronts in eastern parts of the country since 2018. The militants have tapped into the anger many rural communities have towards the state, which was weakened by the fall of former President Blaise Compaoré in a 2014 popular uprising.

Burkina Faso’s first homegrown Islamist group, Ansaroul Islam appeared on the scene in late 2016 with an attack on a military camp in the north.

The group was founded by Ibrahim Malam Dicko, a preacher from the country’s cattle-herding Fulani community, which has long felt neglected by the central government. Young Fulani men form Ansaroul Islam’s core.

Since Dicko’s death in mid-2017, the group has been headed by the preacher’s brother, Jafar Dicko, whose dictatorial leadership style is thought to have angered some rank-and-file fighters.

Ansaroul Islam members have been recruited into al-Qaeda’s official regional franchise, JNIM, while others have joined jihadists fighting in central Mali, according to research by the International Crisis Group (ICG).

Group for the Support of Islam and Muslims (JNIM)

JNIM operates across the Sahel, and the groups that comprise it are thought to be behind major terrorist attacks on hotels, cafés, and the French embassy in Ouagadougou.

Last month, Malian president Ibrahim Boubacar Keita confirmed plans to open a dialogue with the JNIM leader and his central Mali-based deputy, Amadou Koufa, though it’s not clear how negotiations will pan out and what it might mean for fighters in Burkina Faso.

ISGS is led by the Western Saharan militant Adnan Abu Walid al-Sahrawi and made its first inroads into northern Burkina Faso in late 2016. It is also active across the Sahel.

The group formed in 2015 as a split from Al-Mourabitoun but had to wait a while for its pledge of loyalty to be recognised by former IS leader Abu Bakr al-Baghdadi.

It is behind a string of recent mass attacks against military posts in Burkina Faso and neighbouring countries that have cost hundreds of lives and demonstrated the group’s growing strength.

Since early 2019, ISGS attacks have been claimed by the Nigeria-based Boko Haram offshoot, Islamic State West Africa Province (ISWAP) – part of “a new narrative to show a unified [Islamic State] presence in the region”, according to UN terrorism experts.

ISGS fighters cohabit similar areas to JNIM in the Sahel, and are thought to have cooperated with each other on several occasions, unlike in other countries, where they are rivals.

But the group has reportedly poached some Ansoural Islam members as well as JNIM fighters in Mali, while recent clashes and skirmishes in both northern Burkina Faso and central Mali point to emerging tensions.

These bands of local fighters add a complex layer to Burkina Faso’s security crisis. Many have existed for generations but have flourished as the central government has weakened. Armed with crude artisanal hunting rifles, they have proved no match for well-trained jihadists, and have committed a string of rights abuses against civilians they accuse of helping the militants. With the government now seeking to army civilian volunteers, things are set to get even messier.

Variations of the Koglweogo – local, crime-fighting self-defence groups – have existed for years but the vigilantes have grown in stature amid rising banditry and insecurity in rural areas.

Though primarily known for fighting crime – and doling out rough justice – some Koglweogo volunteers have been sucked into the fight against jihadists, who are usually far better armed.

Koglweogo members – who are mostly ethnic Mossi – are responsible for targeting members of the Fulani ethnic group, who they accuse of collaborating with the militants. This has caused a significant increase in inter-communal tensions.

In the east, some Koglweogo groups signed verbal non-aggression agreements with jihadists, while other members even joined the militants – though recent clashes between the two have raised tensions and triggered displacement in the area. 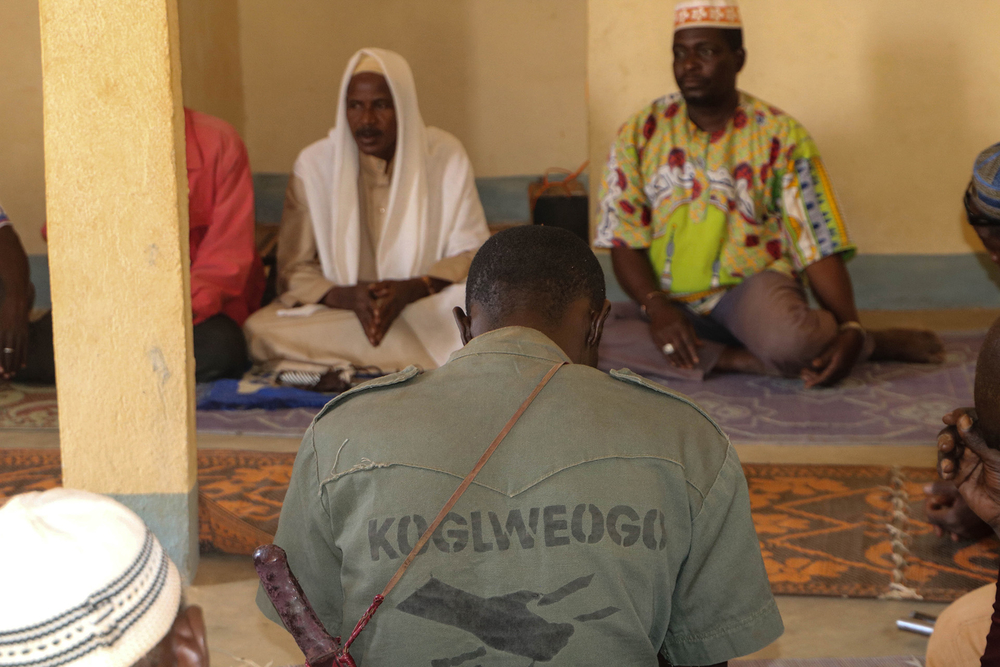 A brotherhood of traditional hunters that perform self-defence duties, the Dozo have a strong presence in western Burkina Faso, and are active across several other West African countries.

Members have clashed with the Koglweogo, who have tried to set up in Dozo areas, and have also been targeted by suspected jihadists.

Dozo leader Yacouba Drabo recently called for the group to “join hands” with state security forces. “We have to realise that the authorities and the SDF alone cannot protect Burkina Faso,” he said in September.

In central Mali, a Dozo group known as Da Na Ambassagou is responsible for a string of deadly massacres targeting the Fulani community, which it accuses of collaborating with the Katiba Macina jihadist group.

Recruitment is just beginning, but some researchers fear the jihadists will attack vulnerable communities where volunteers have assembled, and others wonder who will ensure they don’t commit rights abuses.

Given the government’s inability to manage the Koglweogo, “we can therefore question the capacity of its already understaffed army to effectively supervise volunteers, especially since many of them will likely come from the Koglweogo,” the ICG said in a recent report.

Analysts of Burkina Faso have called for the government to tackle the local grievances enabling jihadism to flourish – from land conflicts to discontent over the conservation of protected parks. But the government has so far gone down the military route, leaving behind a trail of human rights abuses.

Over-stretched and ill-equipped to fight an asymmetric enemy, the FDS – like other parts of the national security forces – has suffered hundreds of casualties over the years.

The forces were weakened by the dissolution of Compaoré’s elite army unit – known as the Regiment of Presidential Security – and with little backing from the government, “there appears to be a real risk of mutiny or even a coup”, according to the ICG.

Human rights organisations have meanwhile accused the security forces of summarily executing hundreds of people during counter-terrorism operations – most from the region’s Fulani community. Such operations may bolster support for jihadists.

Earlier this month, France announced it would send extra troops to reinforce its counter-terrorism forces in the Sahel, while last week the African Union said it would deploy a 3,000-strong force to the region, though it’s unclear when this will happen.

The G5 Sahel Joint Force – which brings together the armies of Burkina Faso, Chad, Mali, Mauritania, and Niger – was launched in 2014 but has been crippled by inadequate funding and coordination problems.