Today on Giving Tuesday, we're asking our readers to help us keep the momentum going.

Support independent journalism you can trust.

For 10 months The New Humanitarian has been on the ground reporting as a surge in violence rips through West Africa. Here’s what we found.
More of this in-depth coverage
Part 1 of a two-part series from Burkina Faso's Centre-North region
About this series
As many note the defeat of so-called Islamic State group in Syria and Iraq, militant violence is spreading like wildfire in lesser-known Burkina Faso, uprooting lives, killing hundreds, and triggering a humanitarian disaster that has caught many by surprise. Journalist Philip Kleinfeld spent four weeks travelling from the capital of Ouagadougou to remote villages in the north, on the front line of this spreading conflict, speaking to civilians, aid workers, and militia leaders.
Read part 2
FOUBE, Burkina Faso

Attacks by Islamist militants, military operations, and waves of inter-communal violence have left hundreds dead and tens of thousands displaced since January in the West African nation of Burkina Faso, triggering an “unprecedented” humanitarian crisis that has caught many by surprise.

Homegrown militant groups, as well as extremists linked to al-Qaeda and the so-called Islamic State group, had been in the country’s arid north since 2016, but have expanded to new fronts in eastern and southwestern Burkina Faso, threatening the stability of neighbouring countries – Ghana, Benin, Togo, and Ivory Coast among them.

The militants have launched near-daily attacks on Burkina Faso’s embattled security forces, which have responded by committing numerous abuses against civilians during counter-terrorism operations, including mass summary executions and arbitrary arrests, according to witness accounts and various rights organisations.

As the state struggles to protect civilians, a growing number of ‘self-defence’ militias have thrown their hats into the ring, opening up a Pandora's box of ethnic tensions in a country once considered a beacon of coexistence and tolerance in West Africa.

“It is unprecedented,” said Metsi Makhetha, the top UN official in Burkina Faso. “The country has never had to deal with such massive displacement.”

The crisis, which has now displaced 135,000 people, is part of a wave of violence currently sweeping across Africa’s Sahel – a belt of land beneath the Sahara desert that is experiencing an alarming increase in violent extremism despite the presence of UN peacekeepers and Western and regional forces.

In Burkina Faso, more than two thirds of those displaced have been uprooted since the start of the year, the equivalent of roughly 1,000 people every day, according to UN figures. If things continue, Daouda Djouma, an official at the UN's emergency aid coordination body in Burkina Faso, OCHA, has said the number of displaced people could reach more than 380,000 by December.

As needs grow, aid groups say their ability to respond is being hampered by insecurity, poor access to affected communities, and a lack of money and resources for a crisis that nobody really expected.

The number of displaced people could reach more than 380,000 by December.

Many hoped that Burkina Faso would enjoy a more peaceful future after a popular revolution in 2014 ousted president Blaise Compaoré, who ruled the country for 27 years.

Instead, his fall created a security vacuum that was quickly exploited by Islamist groups, including al-Qaeda affiliates present in neighbouring Mali. Major attacks were soon launched on hotels and restaurants in the capital, Ouagadougou, and in late 2016 a homegrown Islamist group known as Ansaroul Islam officially set up shop in Burkina Faso’s northern Soum region.

While insecurity has since spread geographically – with militants tapping into local grievances in the east and southwest – the epicentre of violence remains in Soum and other areas in the north, along the border with Mali. 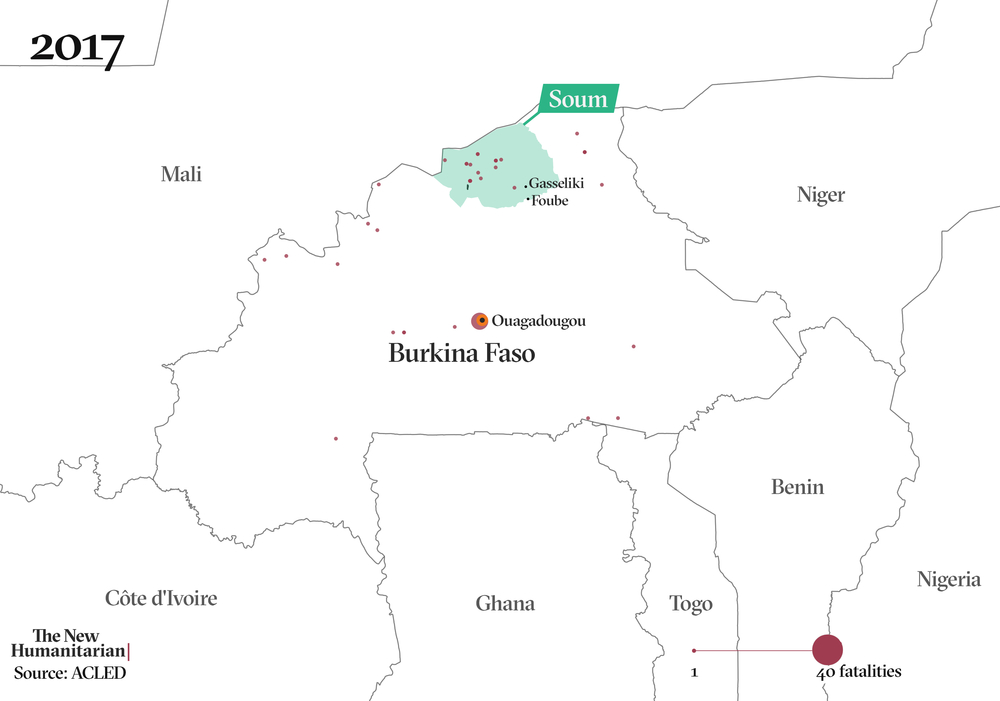 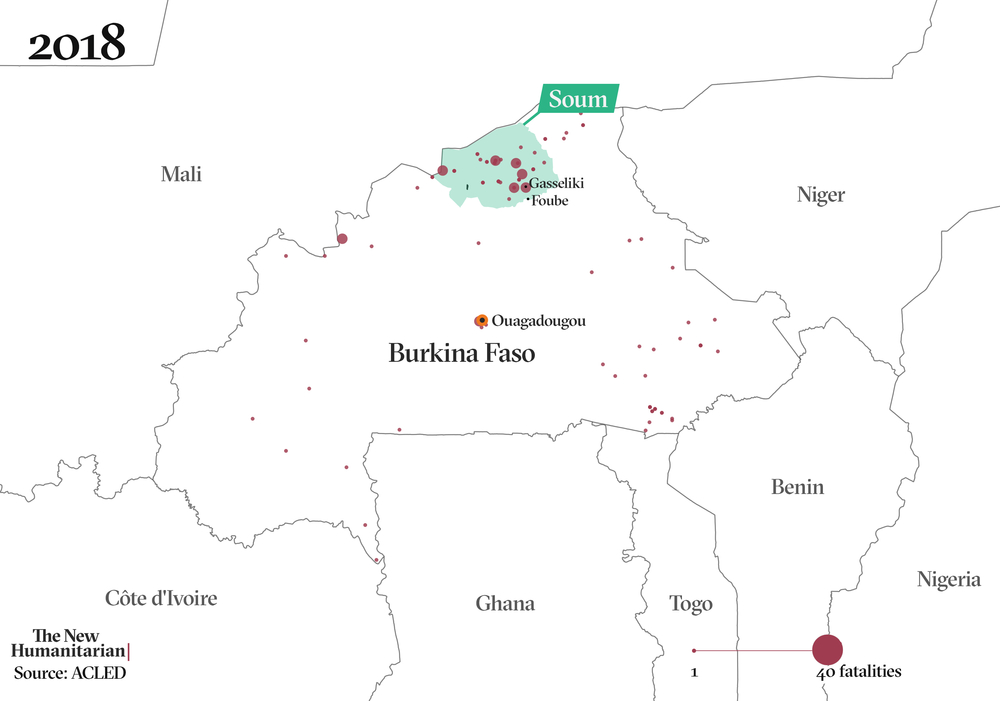 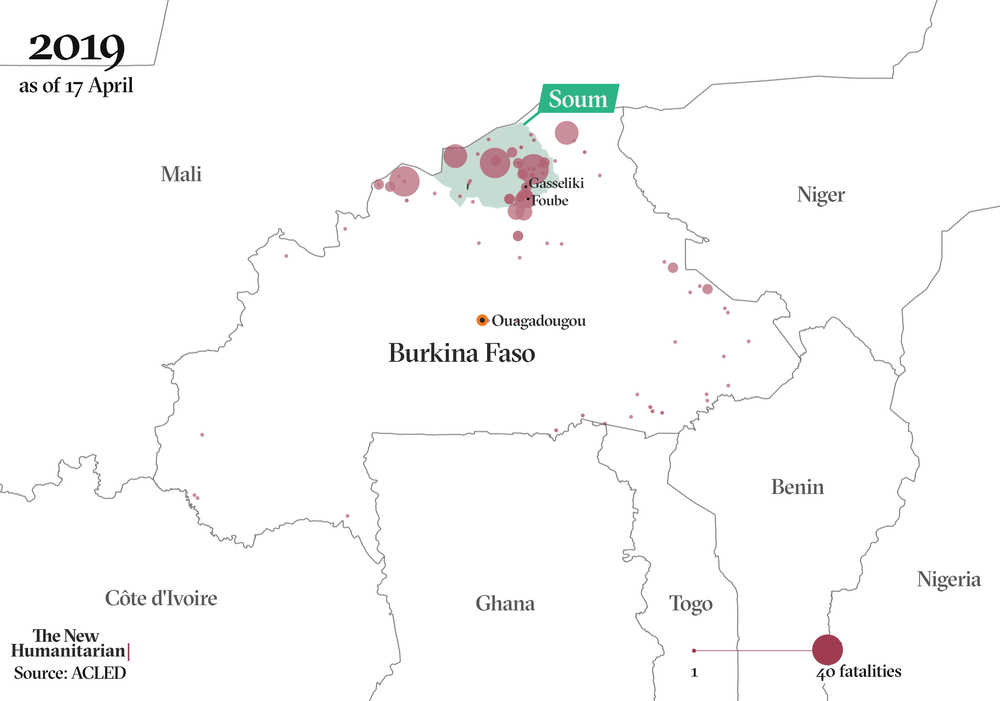 In recent months, militants have hidden bombs inside corpses to maim first responders, dragged teachers off roads and executed them, stolen ambulances, burnt schools, and moved from targeted killings to attacks on entire villages.

Ousmane Koundaba, a farmer in his 60s, said militants on motorbikes attacked his small village of Gasseliki, in Soum, three times in January. Each time, he said the militants – who objected to the presence of a ‘self-defence’ group in the area – stopped at a marketplace, pulled guns out, and then fired indiscriminately.

During one attack Koundaba’s son, Boukary, who worked as a manager at a local pharmacy, was shot dead under a mango tree – one of more than a dozen killed over the course of a month.

Today most of the traumatised villagers have moved into a military-protected camp for displaced persons in Foube, a village just south of where the militants struck. Koundaba said he blamed the Islamists for his misfortune, but he also blamed security services.

“One, two, three, four times we were attacked,” said the farmer. “Nobody came to help us.”

Though all communities have been targeted by militants, the majority of recent killings have affected members of the Bella, Foulsé, and Mossi (of which Koundaba belongs) groups, according to Human Rights Watch.

This has increased ethnic tensions between these groups and members of Burkina Faso’s cattle-herding Fulani community, which has been targeted for recruitment by the militants. Since January, bouts of inter-communal violence have displaced thousands in Soum and the centre-north regions.

The violence follows similar dynamics in central Mali, where rising militancy has seen months of ethnic conflict between Dogon and Fulani armed groups. The violence is being widely described as “ethnic cleansing”.

“The fault lines have been opened,” said Makhetha, the UN official.

Violence against the Fulani community is also being perpetrated by Burkina Faso’s security forces, who suspect them of collaborating with the jihadists.

Between September 2018 and February this year, Human Rights Watch said it documented the detention and execution of 116 men and adolescents by security forces in the north. Nearly all of the victims were ethnic Fulani.

One of the worst attacks took place in early February, during a ground and air operation in which the army claimed to have “neutralised” 146 “jihadists” in the north.

Five witnesses from four affected villages as well as researchers, civil society groups, and a former military official who requested anonymity for fear of reprisals told The New Humanitarian that the Fulani civilians who were killed were targeted and accused of terror links. Targets are often rounded up based on statements from local informants who may have conflicts within the community.

Witnesses described a convoy of masked soldiers snaking through hamlets early in the morning on 5 February. Men were plucked from their beds and shot in front of their families; others were taken into the middle of their villages and executed in groups.

In a small hamlet called Tiabewal, security forces rounded up 23 men – some from their homes, others from a river where their cattle had gathered. The men – all Fulani – were then led to an animal vaccination enclosure, according to villagers who spoke with a survivor of the massacre. They were then forced onto their knees and told: “to pray for the last time”.

The bodies were found later that day by residents and taken to a cemetery. Prayers and burials began in the evening and continued until daylight the following morning because there were so many bodies to bury.

“They were herders and farmers,” said one man, who lost three brothers during the killings. “There is nothing linking them to terrorists”.

Though Burkina Faso is no stranger to humanitarian emergencies – its geographical position means it is prone to droughts, floods, and food insecurity – the country has never experienced mass displacement or conflict like this before.

On top of those fleeing their homes, around 119,000 students are now out of school following attacks or threats by Islamists, and 250,000 people are without access to healthcare services as medical staff flee their posts.

Aid agencies say they are scaling up their efforts but are struggling to attract attention and resources from donors.

A UN humanitarian response plan for 2019 identified 1.2 million people in need of aid and requested $100 million from donors. It is currently just 27 percent funded.

Two camps have been set up by the government since January but the majority of displaced people are scattered across the countryside, many in places where aid workers say they are struggling to access due to insecurity.

Even in Foube, where a camp has been set up, the support is little compensation for what men like Koundaba have lost. Away from his fields, the displaced farmer will now miss the next planting season – yet another blow he will have to accept as insurgency here grows, seemingly beyond anyone’s expectations.

“If you can’t fight somebody,” he said, “you just have to run away.”