When 60 jihadists were killed and 40 captured in Burkina Faso’s northern Sahel region one day in April, the country’s beleaguered armed forces didn’t claim victory: A rival jihadist group did.

The attack was among three reports of infighting in as many days between the al-Qaeda linked Group to Support Islam and Muslims (JNIM) and the Islamic State in the Greater Sahara (ISGS), a regional offshoot of the so-called Islamic State.

The rival organisations, which had previously tolerated each other – appearing to even cooperate on some level – are now in open conflict. And as competition over territory heats up and ideological differences become increasingly pronounced, civilians are bearing the brunt of much of the violence.

The infighting has added a dangerous new dimension to an already multi-sided conflict that has uprooted nearly one million people in Burkina Faso – the vast majority since January last year – and left more than three million severely food insecure, compared to 680,000 by this time in 2019.

More than 90 people have been killed in the country overall this year in 10 separate clashes between the two jihadist groups – up from just one such recorded death in a single skirmish last year, according to the Armed Conflict Location & Event Data Project (ACLED), a conflict monitoring group.

Some hoped the clashes – also occurring in neighbouring Mali – might weaken one or both groups as combatants and resources are allocated away from targeting civilians, military personnel, and local fighters defending their homes and villages against the militants.

“When the movement of these groups is so fluid, everything becomes more blurred in terms of mediation, peacebuilding and access, and negotiations for aid groups.”

But Sahel analysts told The New Humanitarian that people living in affected areas risk being caught in the crossfire and having to flee their homes, while residents who have experienced the violence said they also fear revenge attacks by losing parties.

And as territorial control shifts between the two groups – JNIM are currently in the ascendancy – combatants have increasingly been spotted in areas where they weren’t previously known to be active, making it harder for humanitarian organisations in Burkina Faso to know who to engage with.

“When the movement of these groups is so fluid, everything becomes more blurred in terms of mediation, peacebuilding and access, and negotiations for aid groups,” said Flore Berger, a Sahel research analyst at the International Institute for Strategic Studies.

JNIM was formed in 2017 as a coalition of al-Qaeda-affiliated groups that have been the dominant jihadist force in the Sahel since the first emerged in the early 2000s. Led by Malian militant Iyad Ag Ghaly, the group is active in both Mali and Burkina Faso.

ISGS was formed in 2015 as an al-Qaeda splinter, and is led by Adnan Abu Walid al-Sahrawi from Western Sahara. It has gained ground over the past couple of years – even as its parent organisation in the Middle East has experienced the reverse – launching a string of mass attacks in Mali, Burkina Faso, and Niger. French and regional counter-terrorism forces say it is now their main target.

Unlike countries such as Yemen and Syria, where IS and al-Qaeda factions have long been openly hostile to each other, the groups had previously tolerated their coexistence in the Sahel. Some even called the once-cordial relationship the “Sahelian exception”.

Leaders with common militant roots met on multiple occasions to discuss possible cooperation, said Berger, of the International Institute for Strategic Studies. At times, they shared intelligence or assisted each other logistically, she said, citing the kidnapping of two French hostages in Benin in May 2019 as one example, and attacks against military positions in Burkina Faso’s Sahel region in August of last year as another.

“They deconflicted, or at least opted to not carry out attacks on one another in favour of targeting military and peacekeeping forces in the region,” added Julie Coleman, a senior research fellow at The International Centre for Counter-Terrorism.

But turf wars broke out as ISGS expanded into JNIM territory, while ideological differences became more marked as JNIM expressed a willingness to negotiate with the Malian government – an idea opposed by ISGS, which then poached rival fighters who felt their leaders had gone soft.

Small-scale clashes led to a crisis meeting between ISGS and JNIM leaders last September in Mali that was designed to cool things down and define territories. The situation reportedly turned sour when four ISGS members were detained and imprisoned.

The rivalry deepened this year, with both groups intensifying their propaganda messages through radio broadcasts and print media. Islamic State’s weekly newspaper al-Naba accused JNIM of waging war against its supporters, while its combatants called rival leaders “fake” and “bad Muslims” in audio recordings heard by TNH.

Several days of clashes in April resulted in 80 deaths in Burkina Faso’s Sahel region. And hostilities had worsened by June to the point that JNIM members were pictured in eastern parts of the country wearing turquoise headbands to differentiate friend from foe, signalling “all-out war”, according to Heni Nsaibia, a researcher at ACLED. 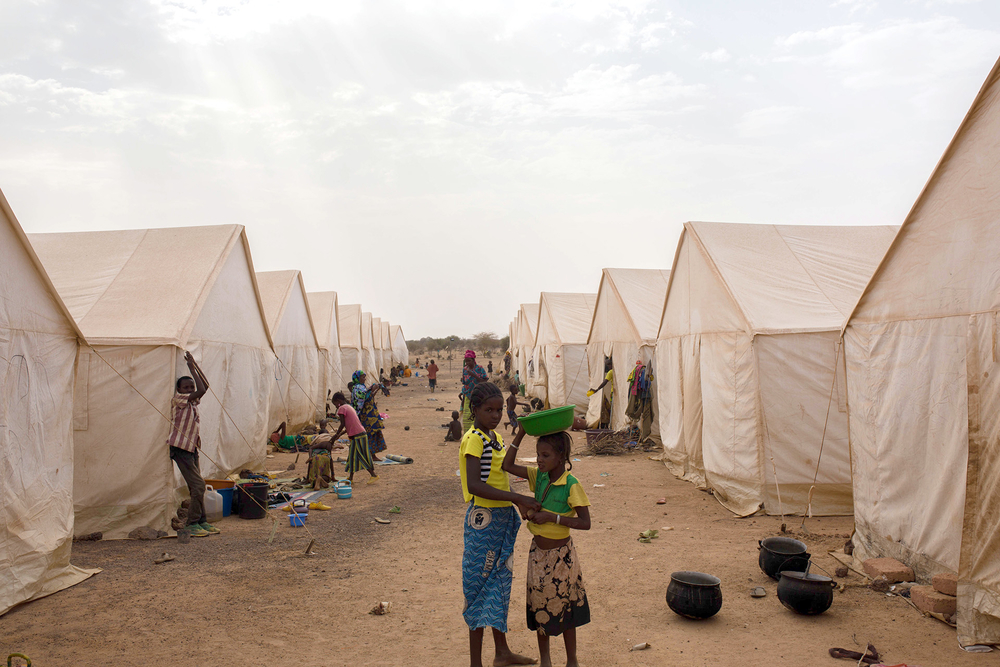 Philip Kleinfeld/TNH
Civilians risk being caught in the crossfire as jihadist infighting roils Burkina Faso, where almost a million people are currently displaced.

Caught in the crossfire

While the clashes could weaken one if not both of the groups, they put “civilians remaining in the area (who) haven’t fled to refugee camps at risk”, said Rida Lyammouri, a Sahel researcher at the Policy Center for the New South, a Morocco-based think tank.

When fighting between JNIM and ISGS erupted in Tongomayel commune in northern Burkina Faso in April, JNIM regained an area previously controlled by its rival, allowing civilians – some of whom view the group as less brutal than ISGS – to return home.

But one resident of the area told TNH that his neighbours now fear ISGS retaliation should the situation change. “If ISGS gets strong again and retaliates, they’ll try to show people that they shouldn’t be disobeyed,” said the man.

Though both organisations target civilians, the local man – whose name TNH is not using to protect his safety – said JNIM is referred to by local residents as “the kind ones”, and that people generally prefer living under its control.

“If ISGS gets strong again and retaliates, they’ll try to show people that they shouldn’t be disobeyed.”

After reclaiming territory in the area, the man said JNIM fighters reopened some transport routes that had been blocked; allowed aid to flow into villages; and even apologised to people living in areas that had been attacked by ISGS.

But while JNIM appears to have now pushed ISGS towards Burkina Faso’s eastern border with Niger and Benin, ISGS members remain active all over the country, creating operational challenges for humanitarian organisations and danger for civilians who can get caught in the middle of clashes.

For example, on a trip to the northwestern region of Boucle du Mouhoun in May, local security forces told TNH that ISGS was active along the border with Mali – an area typically considered a JNIM stronghold. After losses elsewhere, the Islamic State combatants there appear eager to prove their strength.

Madou, a 27-year-old mechanic from Boucle du Mouhoun, said he was ambushed in May by roughly 30 jihadists outside the northern town of Barani, less than 10 kilometers from the Malian border. Based on accounts of the incident, security analysts told TNH the jihadists were likely ISGS fighters.

The gunmen repeatedly screamed at the captives, insisting they were in control of key towns and large swathes of the North and Sahel regions, despite evidence to the contrary. “They kept shouting… ‘we control the whole area’,” said Madou, who requested only his first name be used to protect his safety.

The mechanic was set free, but heard that six of his approximately 20 fellow hostages were later killed.