This article is part of our in-depth coverage. Read more like this...
Part 2 of a three-part series from Tillabéri, Tahoua, and Niamey

About this series
As rising militancy spreads across Africa’s Sahel region, Niger, one of the world’s poorest countries, now finds itself at the centre of the storm. From October to December 2018, freelance journalist Giacomo Zandonini and photographer Francesco Bellina travelled to some of the most neglected conflict areas to speak to members of displaced communities and aid workers, and to chronicle humanitarian needs – needs that in the first three months of this year are soaring.
Read part 1 and part 3
TILLABÉRI, Niger

Alhamdou Issalak has spent the last year counting the violent deaths in his community, one of those worst affected by the growing number of armed attacks in western Niger – part of a rising tide of militancy sweeping across the Sahel region from Mali to Burkina Faso.

The “catastrophe”, as the vice-mayor of the town of Inatès in the Tillabéri region calls it, began with the killing of two of his friends in May 2018.

“From then to early November, 57 people were killed [around Inatès] by armed groups,” Issalak said. “About 14,000 displaced found shelter in my municipality, while thousands of animals have been stolen to fund these same groups.”

In April 2018, German aid worker Jörg Lange was kidnapped while driving back from the town, prompting all NGOs in the area to remove their international staff and restrict the movement of local personnel. Because of repeated and escalating attacks, a state of emergency has been in place across parts of the Tillabéri region since early 2017.

Issalak, a middle-aged Tuareg, blamed the violence on a jihadist group that locals still refer to as MUJAO (the Movement for Oneness and Jihad in West Africa, or MOJWA, in English), despite the fact it has fragmented into several factions, including Islamic State in the Greater Sahara, or ISGS. 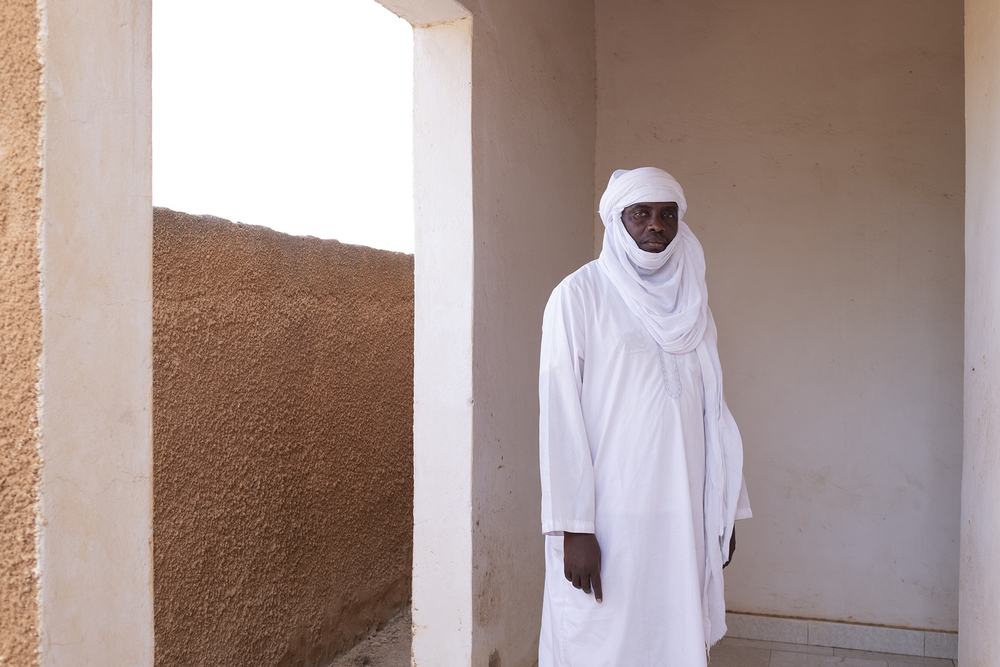 He also pointed to Malian Tuareg militias such as GATIA (the Imghad Tuareg Self-Defence Group and Allies) and the MSA (Movement for the Salvation of Azawad), which formally support the government of Mali. Based in the Menaka, Gao, and Kidal regions of northeastern Mali, both groups launched several armed incursions in Niger between March and November last year, officially to secure the border against jihadists.

Read more: Who’s who of insurgent groups in the Sahel

“You might think they have ideologies, political visions,” Issalak said. “But these are just traffickers of weapons and drugs.”

The vice-mayor has tried to convince tribal elders and chiefs not to send their sons to fight with ISGS and other groups, which often try to pit one community or ethnic group against another. But recruitment has turned increasingly violent, and, for some, embracing an AK-47 is the only choice. Militants also come to villages at night to ask for protection money.

“Intercommunal tensions are an old story,” Issalak said. “But who’s funding the jihadists and what is their plan? Too many questions remain unanswered.”

Across the region, the security situation has worsened in early 2019. In February alone, there were 55 incidents reported, including kidnappings, targeted killings, and attacks by armed groups in 10 rural communes, among them Inatés, Makalondi, and Ayorou. 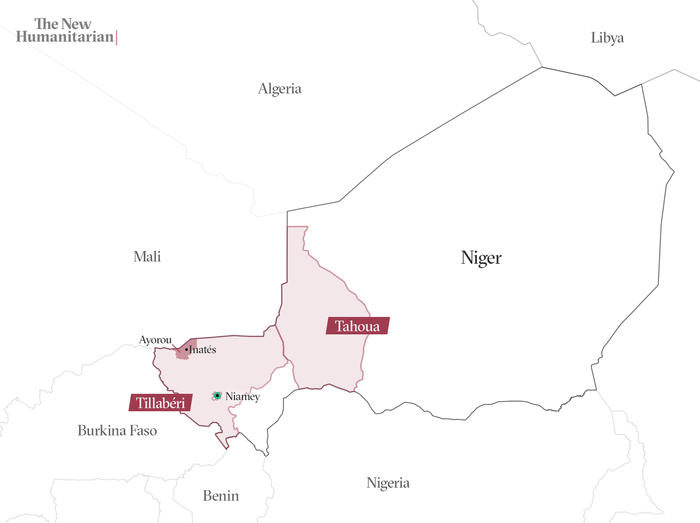 For Niger, this new unrest compounds another, longer-running militancy problem in the southeast, where communities in the Diffa region have long suffered attacks and displacement due to the Boko Haram insurgency spilling over from Nigeria.

In Niger as a whole, “civilian targeting events” rose by 600 percent in the last five months, compared to the same period a year earlier, according to the Armed Conflict Location & Event Data Project, ACLED. There were 63 attacks resulting in 78 reported fatalities, it said.

A cycle of retaliation

Hassan Addoum Adda, a cattle herder and the tribal chief of Aghay, a village between Inatès and Ayorou, lived a peaceful life until 17 members of his family were killed on one day last May.

The 50-year-old was running errands, but when he returned he remembered seeing “a pillar of black smoke billowing up from the village”, and a woman shouting that there were militias “killing and looting”.

“Men from GATIA had entered the village, brandishing weapons, and asked if the chief was there,” Adda recalled. It was Ramadan and most of his relatives were praying near the mosque. The men asked for water. “After drinking, they started shooting all around,” Adda went on. Twelve people died on the spot. Five more bodies were found later on the edge of the village.

“These are the kind of episodes that pushed Fulanis into the hands of terrorists,” said Amadou Moussa, Adda’s younger cousin and a Fulani activist in the Nigerien capital, Niamey.

According to Moussa, an unjust alliance between Operation Barkhane – France’s counter-insurgency force in the Sahel – and the Mali-based Tuareg militias, the MSA and GATIA, has opened the way to such cross-border incursions.

A mid-term report by the UN Panel of experts on Mali, released in February, contains similar accusations, mentioning the case of an operation conducted by Barkhane forces and the MSA in October 2018 in which three Fulani women and a four-month-old baby were killed.

The shooting in Aghay was the culmination of a cycle of retaliation that left at least 150 people dead – both Tuareg and Fulani – between late April and mid-May 2018 on both sides of the Niger-Mali border.

The day after the massacre, the village received a visit from Nigerien general Mahamadou Abou Tarka – a Tuareg who Moussa says backs the Tuareg militias – and Niger’s minister of interior, Mohamed Bazoum.

“They offered one million CFA [about $1,700] for all the widows, sent some food supplies, and then we never heard back from them,” Adda said, bitterly.

‘Even the hippos escaped’

The rural community around Ayorou, which used to be a popular tourist town between the city of Tillabèri and the border with Mali, was already being hit by occasional armed assaults in 2016. But their consistency and brutality has since grown.

In October 2017, 13 gendarmes were killed in an attack claimed by ISGS. Weeks earlier, the same group had ambushed a convoy of US and Nigerien forces in Tongo Tongo, another village in the Ayorou municipality. The high-profile attack killed four green berets and five local soldiers, bringing brief media attention to a largely forgotten corner of the world. 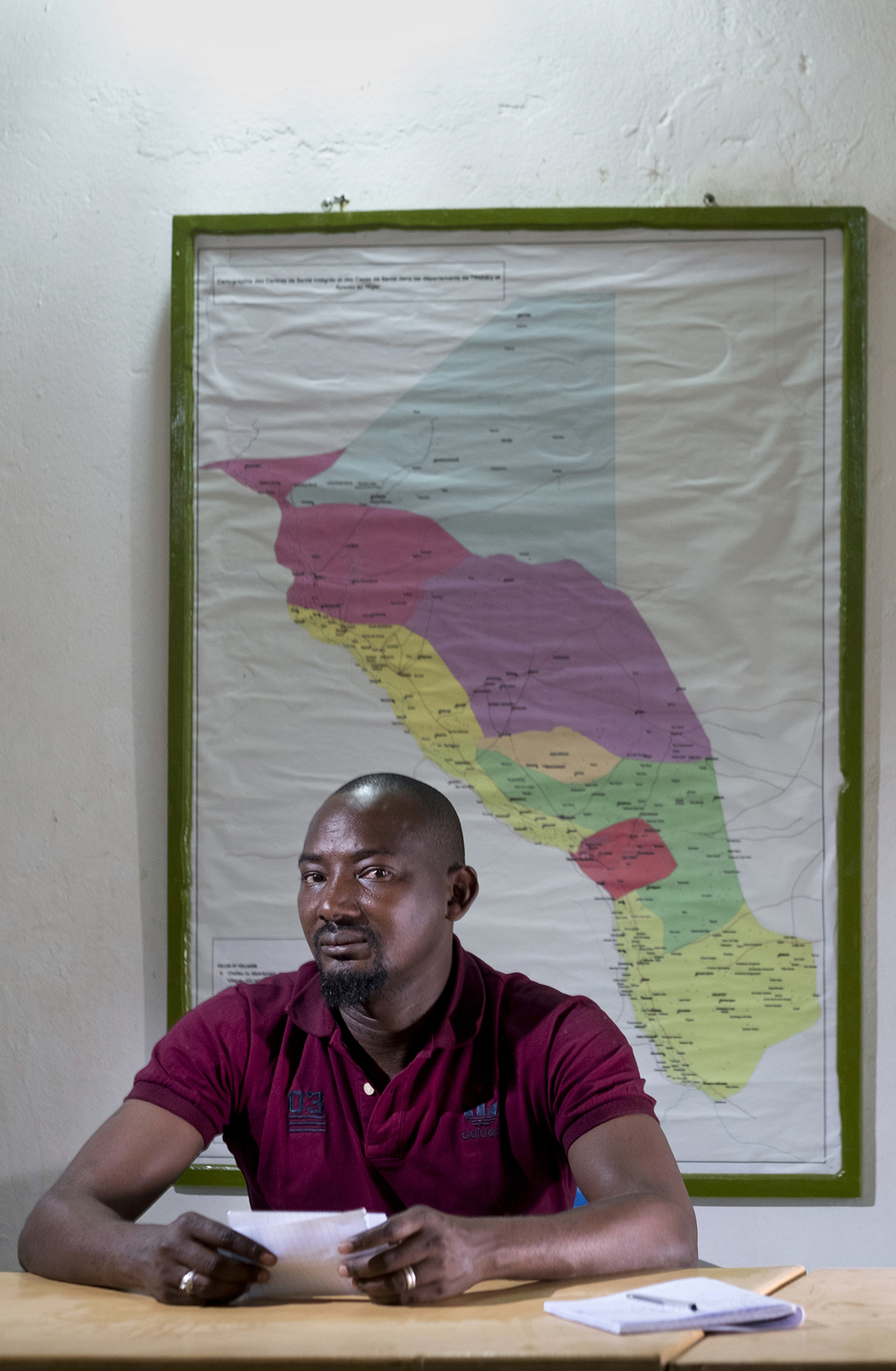 Goubakoye Abdoullaye, Ayorou’s chief doctor, said his first concern when waking up in the morning is that his medical personnel are safe. No attacks on his staff have occurred yet, but he said the “terrorists” had threatened to come back and kill them.

The uptick in fighting has led to a bizarre problem for residents of dozens of nearby river islands. Medical evacuations have become impossible at night due to the growing risk of hippos overturning boats. “Even the hippos escaped from the fights to come here, but they became too many,” said Abdoullaye.

The doctor loses most sleep over the many people displaced by the violence he can’t reach. Most live in the Inatès area, where the only ambulance has been stolen by armed groups. “For our health workers, reaching them is a nightmare, we’d need a military escort that costs too much,” Abdoullaye explained.

Niger’s judicial system is trying to adapt to developing trends, especially around the growing problem of militancy and how it relates to existing terrorism offences.

At the core of the old administrative centre of Niamey, taxis wait alongside the palace of the High Court. Inside, huge folders labelled “terrorism”, “arms trafficking”, and “drug trafficking” line the bookshelf of chief prosecutor Samna Chaibou. He explains that terrorism in Niger is an “old story”, dating back to 2008-2009, but legal reforms have come only more recently.

“From 1961 till 2011, we had only one article in the criminal code dealing with terrorism,” Chaibou said. “Now, this has changed.”

“As an overall principle, defectors with blood on their hands are judged,” the prosecutor said. “Others who didn’t commit crimes can be granted a pardon after a reintegration process.”

In Niger, minors and women recruited by terrorist groups can be considered victims, the prosecutor added.

“Legality is the key. Citizens in border areas have to understand that the state is different than criminal groups.”

With the new situation in Tillabéri, “the state won’t duplicate what they did in Diffa, for Boko Haram,” Chaibou said, referring to the closed camp for former members of the jihadist group in Goudomaria, where 230 people still live, two years after the facility was opened

Yet it is still unclear how so-called “defectors” from jihadist groups in the western regions will be dealt with.

“Legality is the key,” Chaibou said. “Citizens in border areas have to understand that the state is different than criminal groups.”

The government has initiated dialogue with western border communities and some compliant armed groups, according to a recent UN report, which also noted that some Malian and Nigerien cross-border communities had signed a peace agreement in November.

Yet several victims and their relatives in the troubled western regions told The New Humanitarian that civilians affected by violence have not been able to access proper legal remedies. The state’s focus on terrorism, they say, is leaving victims’ needs unmet.