With the latest deadline for South Sudan’s rival parties to form a unity government set to expire on Saturday and key issues – notably over the number of states the country will be divided into – still unresolved, uncertainty is building for hundreds of thousands of South Sudanese displaced by the six-year war.

Earlier this month, photojournalist Alex McBride visited a UN Protection of Civilians (PoC) site – a displacement camp guarded by peacekeepers – in the capital, Juba, where some 30,000 people are living. Few were preparing to leave any time soon.

“It could be one year, two years, three months, four months – we don’t know,” said Alahad James Gai – the co-founder of a street performers’ collective known as the Wise Kidz that McBride trailed for the day.

President Salva Kiir offered last week to return South Sudan to 10 states – after unilaterally increasing them to 32 – a major opposition demand and a step forward in the peace negotiations, analysts of the country said.

But on Sunday opposition leader Riek Machar rejected Kiir’s offer, because the deal also included the creation of three “administrative areas”, which Machar described as a “Pandora's box”.

The two sides first signed a power-sharing deal in September 2018 after years of civil war left millions displaced and an estimated 400,000 dead. But they have been unable to finalise negotiations and have missed two previous deadlines – May 2019 and November 2019.

Question marks also hang over the formation of an 83,000-strong unified army, and how tens of millions of dollars pledged by the government to implement the peace deal have been spent, as The New Humanitarian reported last week.

While fighting has largely subsided thanks to a ceasefire deal, the humanitarian picture remains bleak. Floods submerged vast parts of South Sudan late last year and East Africa’s biggest locust outbreak in decades has now arrived in the country.

As peace negotiations continue, life in the sprawling camp visited by McBride is continuing more or less as normal. For residents, that means the same daily struggles over food, water, and health – though for Wise Kidz members like Gai there is always room for inspiration.

“Some people don’t get the message through radio, so they have to get it through drama,” said Gai.

Their unusual stage is one of six PoC camps around the country that host around 200,000 people inside compounds belonging to the UN peacekeeping mission in South Sudan, known as UNMISS.

Set up at the start of the civil war as thousands fled to UN bases, the sites are credited with saving countless lives. But they have also come under attack by armed groups, sucked in the resources of UNMISS, and turned from a temporary protection measure into sprawling settlements – featuring schools, markets, and even street performers like the Wise Kidz. 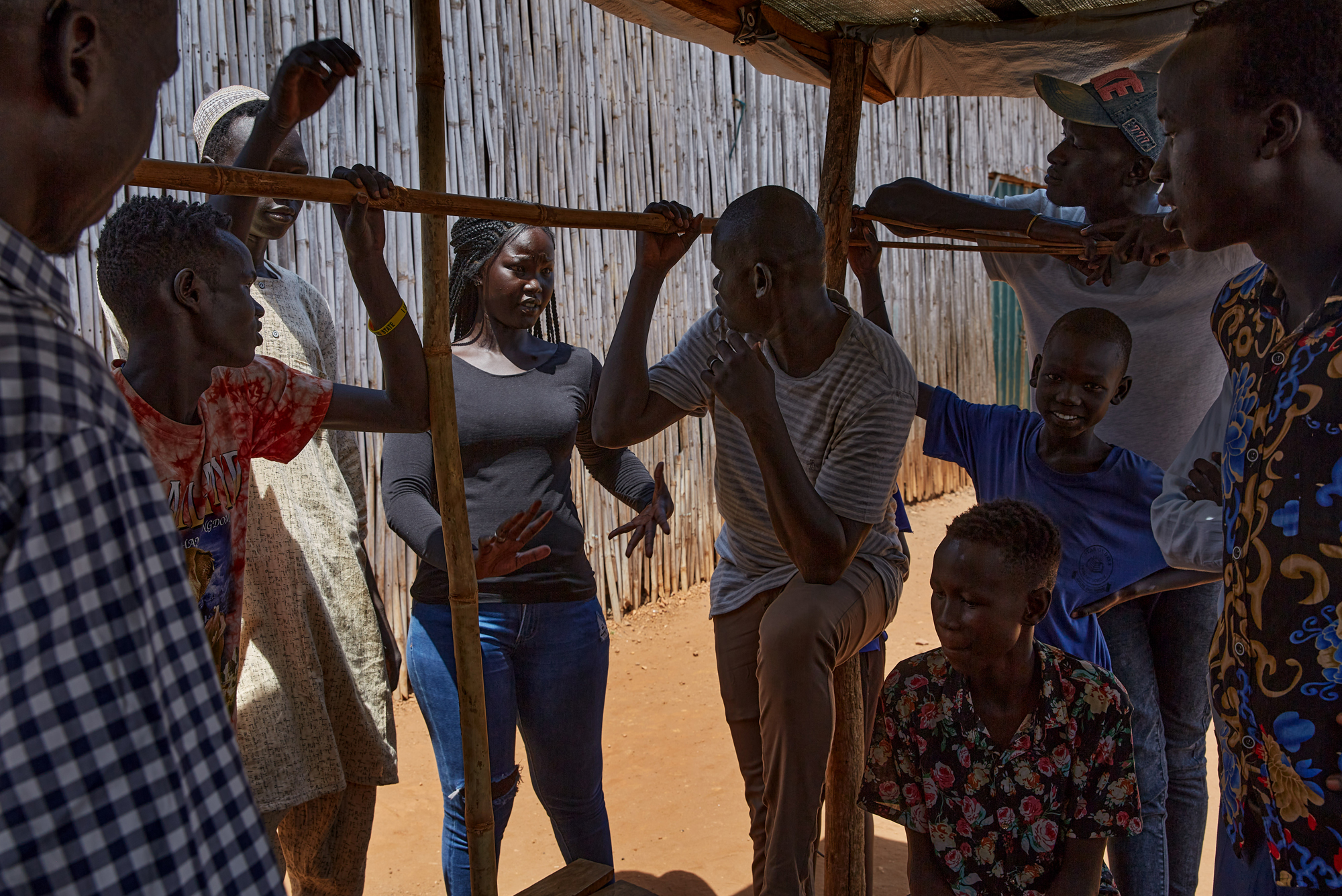 The Wise Kidz gather to discuss performance plans for the day and allocate roles. The group usually starts with light-hearted comedy before delivering a more serious message as the crowd builds – though they rarely touch on political issues like the peace negotiations. “We are protecting ourselves because it’s a very critical situation right now,” said Aban Ayul, a member of the group. 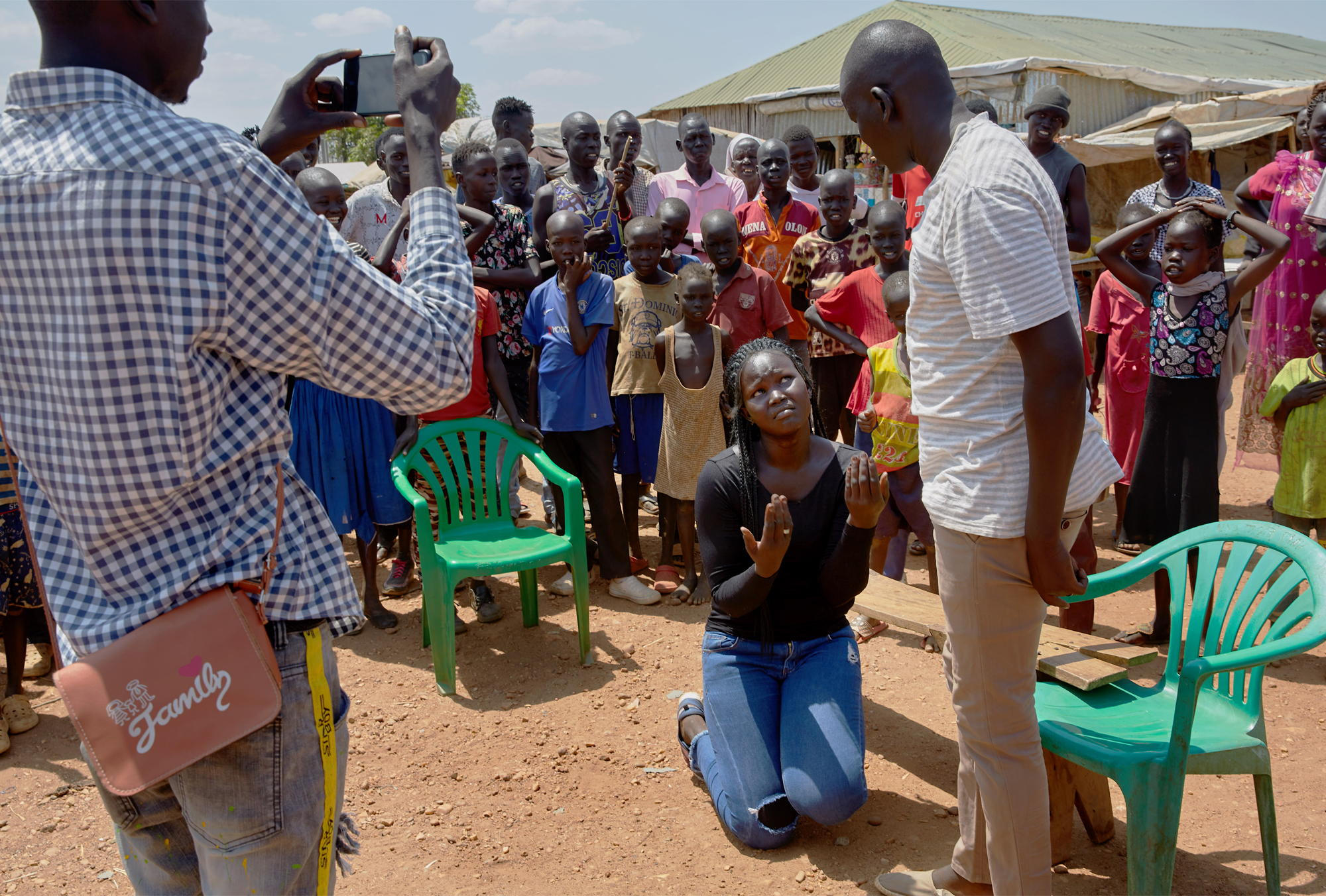 Ayul plays the role of a unfaithful girlfriend in front of an audience inside the camp. Some of the skits, she explains, are old stories that have been passed from one drama collective to another; others are tales based on conversations overheard around the camp. Punctuated by laughter, sketches tend to last between five and 10 minutes. 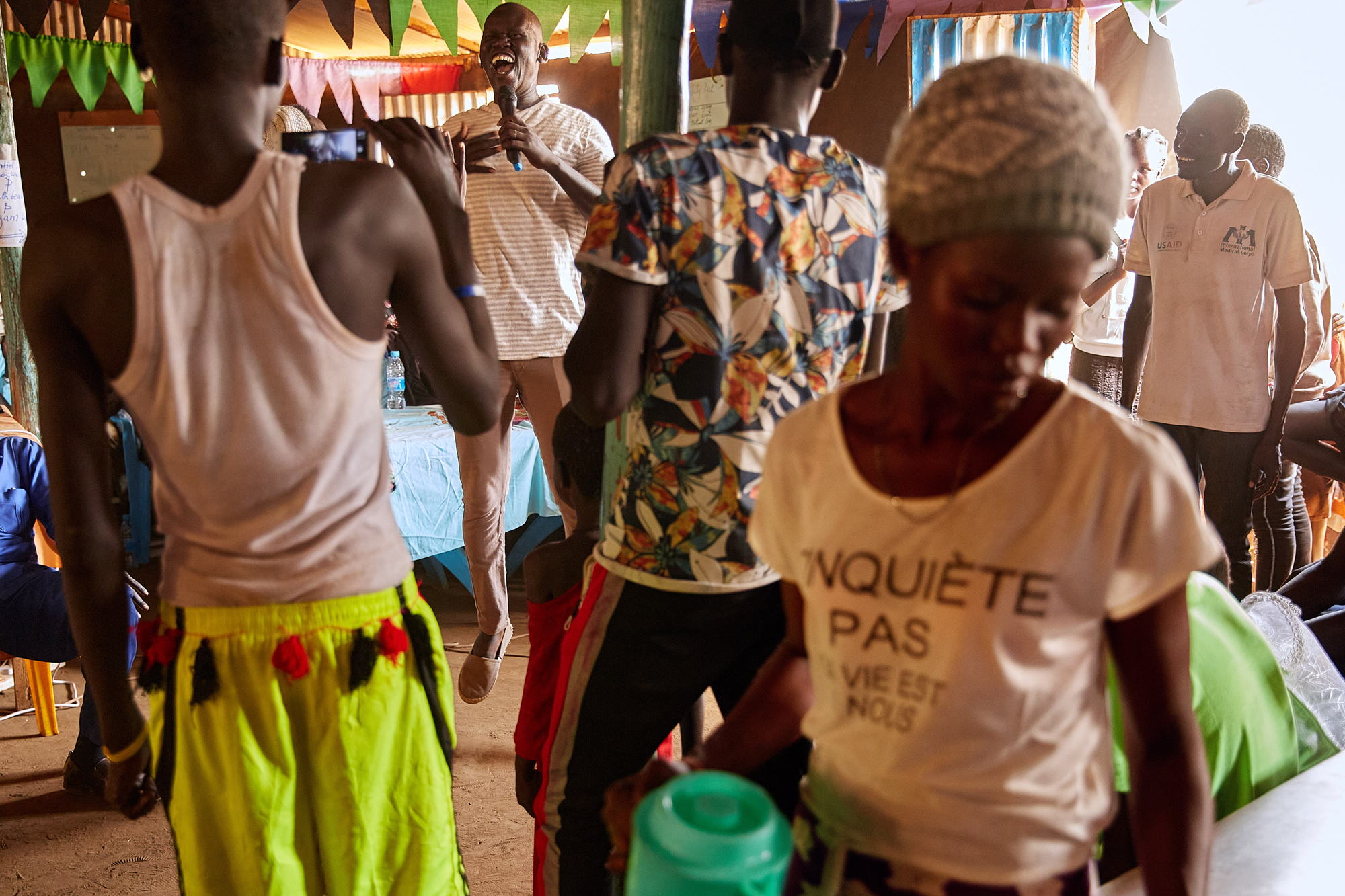 Gai performs at a camp church, playing the role of a deaf man searching to find a wife. The 33-year-old started as a street performer in 2011 in Bentiu, a northern town that was the site of one of the war’s worst massacres.He moved into the Juba camp in 2014, forming the Wise Kidz collective three years later.

Playing to the crowd 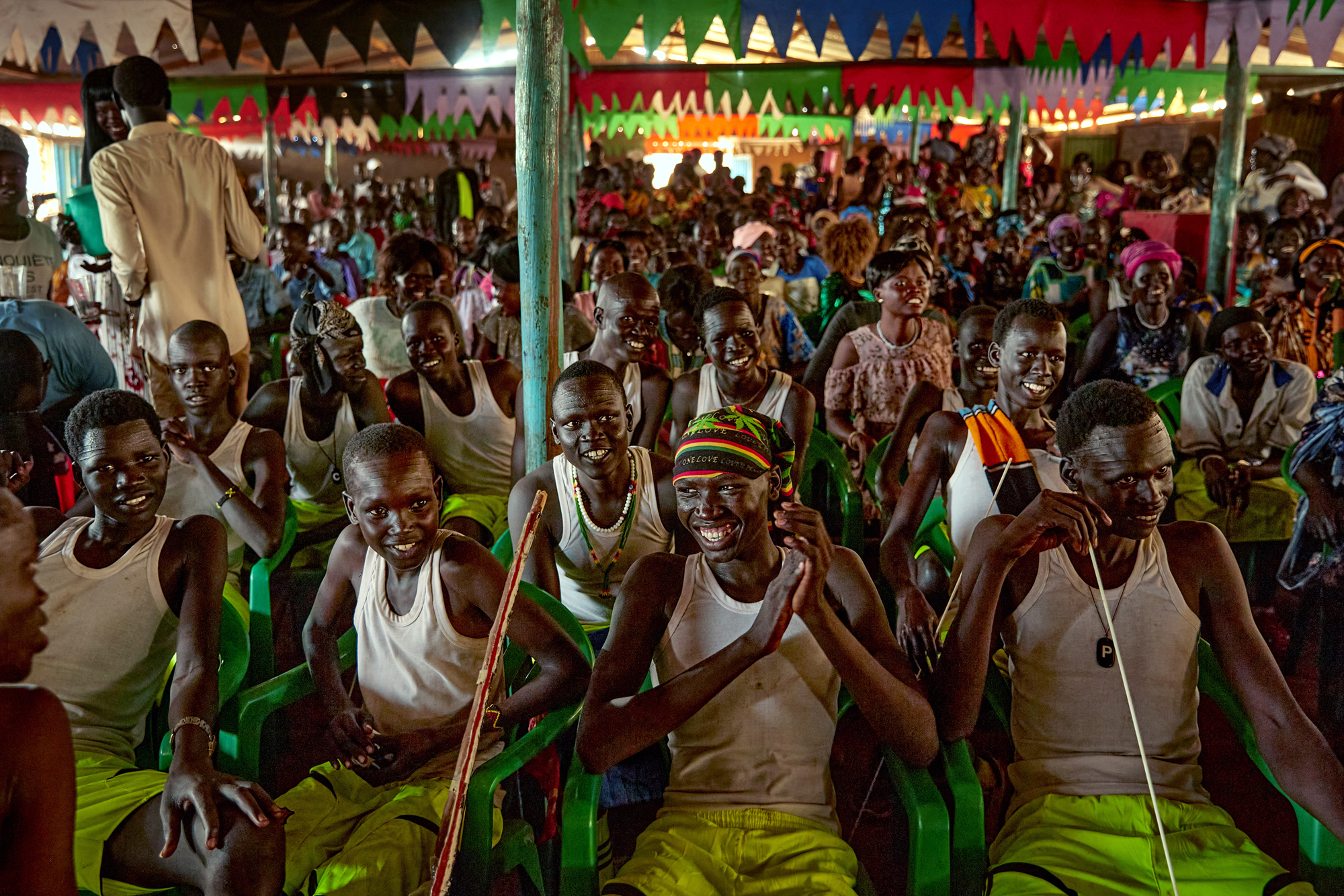 A church congregation enjoys a Wise Kidz performance about the everyday life of camp residents. While a ceasefire agreement is holding, Gai said the group – and fellow residents – are forced to live in limbo until peace can be fully established. “We’re just waiting… for when [negotiations] are finished, and for when the peace has come: when there’s a complete security arrangement, when people can see that there is calm, and when they are moving freely among the states,” he said. 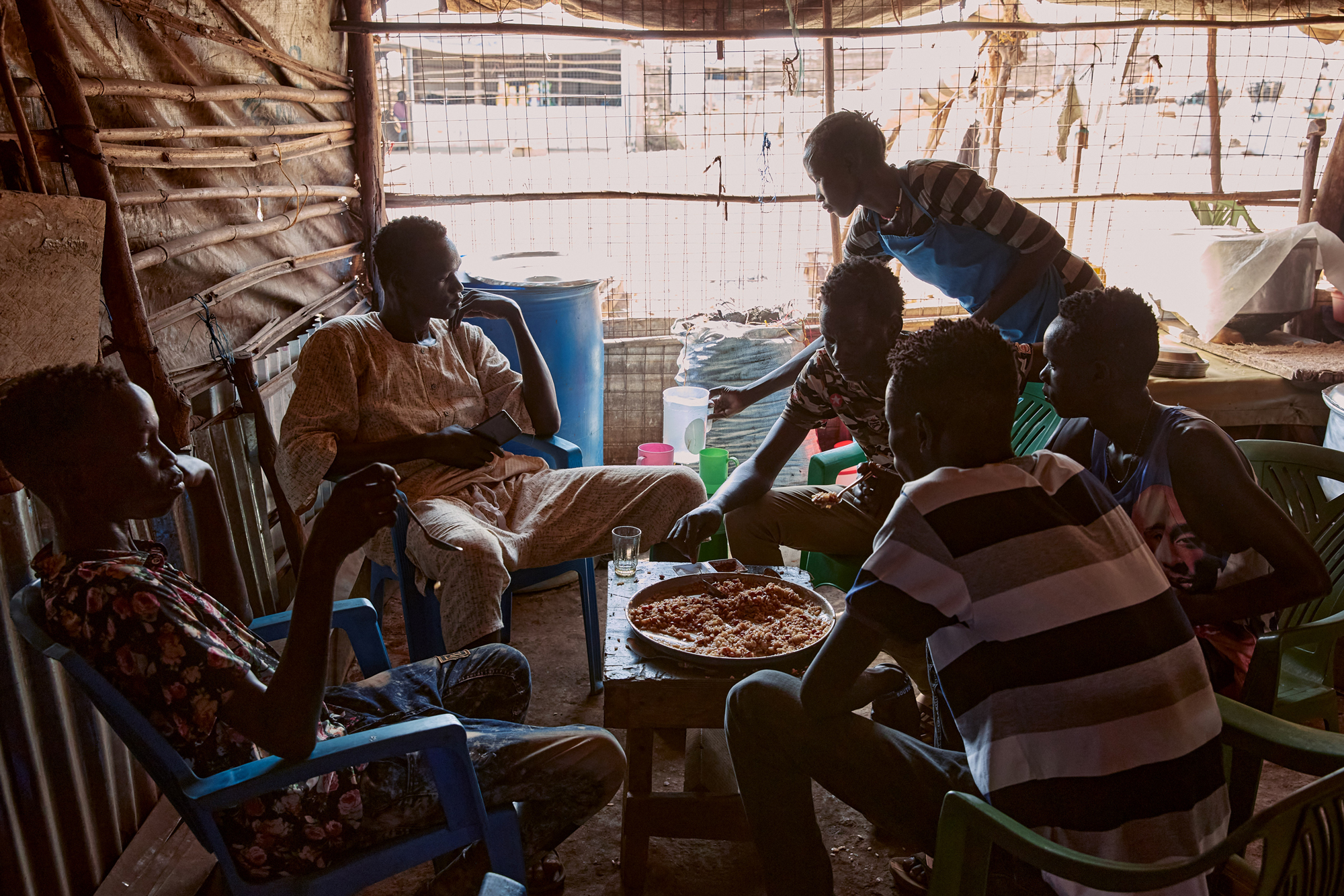 Members of the group break for lunch at a restaurant inside the camp. Although PoC sites offer relative safety for their residents, many are “suffering” inside, said Gai. Aid groups have criticised the “dangerously congested” conditions at some sites in the past. The camp in Juba imposes a strict curfew from 6pm, which often causes problems for residents with jobs in the town centre – a 30 minute minibus ride away. 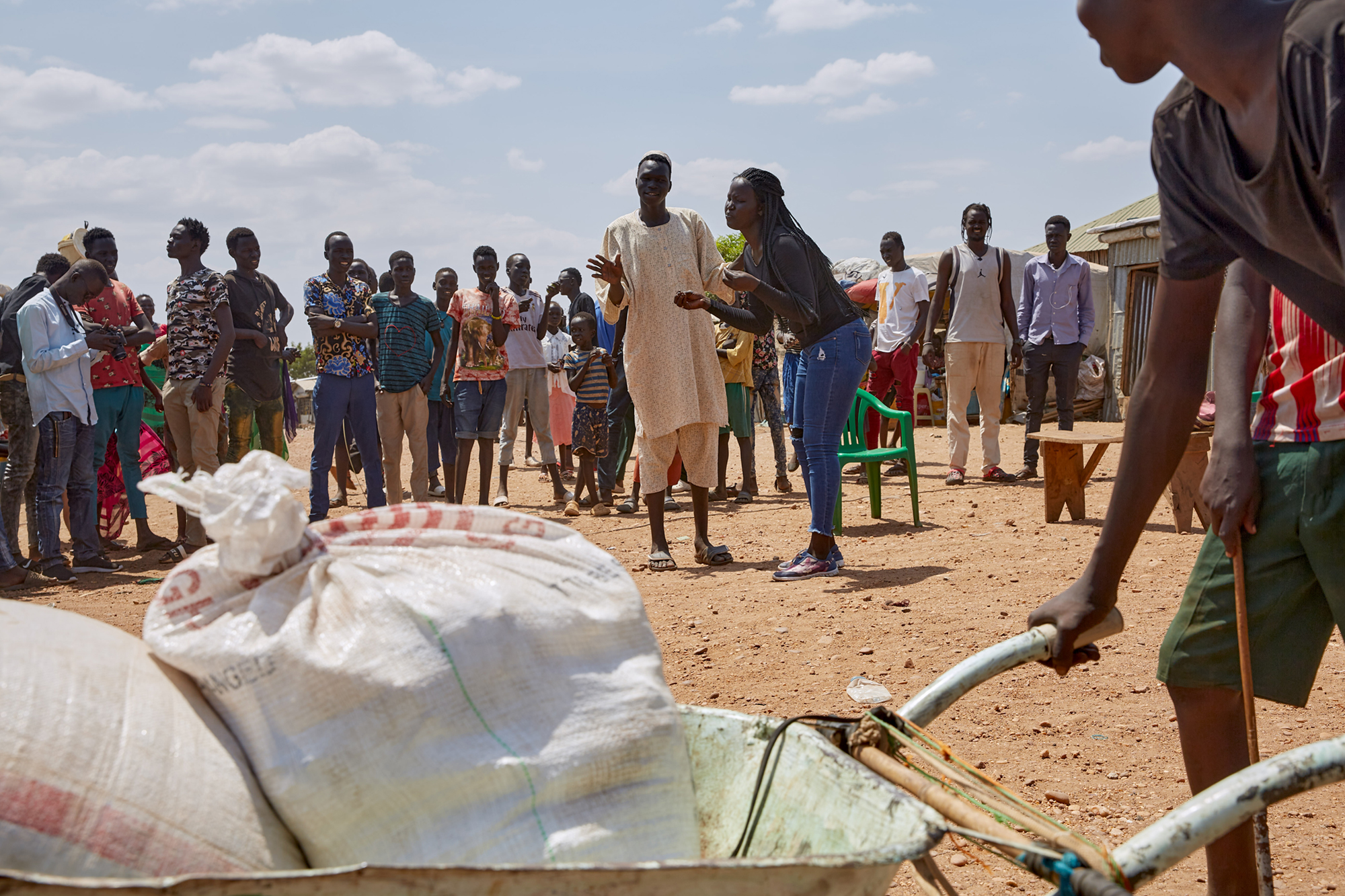 Passers-by look on as the group puts on a show in the middle of the busy camp. The Juba site – and six others around the country – were created when civil war broke and thousands sought refuge inside UN compounds: a situation “unprecedented in the history of peacekeeping and humanitarian action”, according to the Norwegian Refugee Council.