South Sudan’s warring parties are less than two months away from forming a unity government, but meetings last week failed to move the needle on a 2018 peace deal long-delayed by disputes. The question now: what will happen in November?

The war-torn nation has been slow to emerge from five years of fighting that has killed almost 400,000 people and displaced millions. Some 180,000 people remain in six UN-protected sites across the country; many are still too afraid to return home.

A unity government was supposed to be formed in May, but a deadlock on several key issues forced a six-month extension. Since then, little has changed. Last week’s talks in Juba between President Salva Kiir and opposition leader Riek Machar were the first time the rivals had met in the capital in almost a year.

Government spokesman Michael Makuei told The New Humanitarian the talks were “highly successful” and insisted plans to meet the November deadline were still on track. Deputy chairman for the opposition Henry Odwar, however, described the meetings as “luke-warm”, and said key issues needed to be resolved before a unity government could be formed.

“It’s not clear they made any breakthroughs. Both leaders are positioning themselves to blame the other party if they fail to form a government together in Juba,” Alan Boswell, senior analyst for the International Crisis Group, told TNH. “The peace deal will almost certainly face a major crisis in November. The risk remains substantial that the process breaks down.”

This briefing explores the state of South Sudan’s fragile power-sharing agreement ahead of the 12 November, when Machar is supposed to return and once again serve as Kiir’s deputy.

Will a national army be ready in time?

In order for Machar to return – he has been living abroad since he was chased out by Kiir’s allies amid fighting in 2016 – opposition and government armed forces have to unite into one national army.

During Kiir and Machar’s meeting last week, they agreed to fast-track the screening and unification of the new force, which will consist of 83,000 troops – at least half of those need to be in place by November. Both parties also agreed on a VIP protection force of 3,000 soldiers, with an equal number of opposition and government troops. 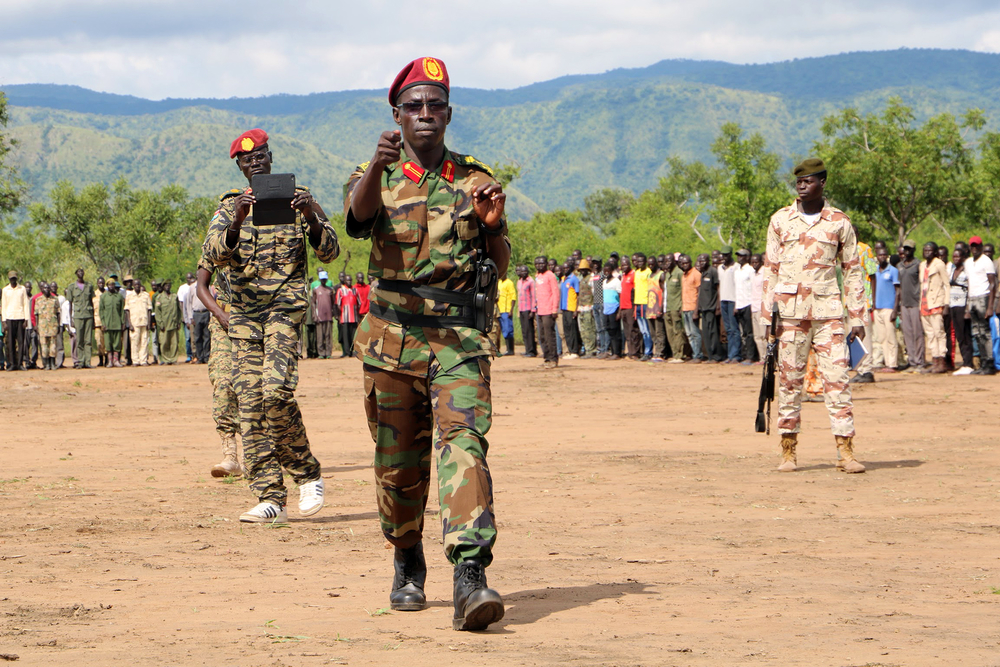 The troops have to be cantoned and trained before uniting, and this process has been slow and under-funded. And, although they are expected to form a single army in a matter of weeks, both sides are still largely distrustful of the other.

On a visit to an opposition cantonment site last month, TNH met soldiers who complained of hunger, health issues, and harassment from government soldiers.

There were roughly 1,000 opposition fighters at the site, which is supposed to hold 3,750 people. Two weeks’ worth of food, delivered more than a month ago, had run out, the soldiers said.

“[The government soldiers] want to know the number of weapons and ammunition we have,” said Okeny George M Lam Onek, the division commander in charge of the site. “If we’re partners to peace, why should it matter?”

Onek also said government forces hadn’t been moving out of the towns and into the barracks as stipulated by the agreement, making the opposition question their commitment to peace.

What is the states issue?

After the failed 2015 peace deal, the government expanded the previously agreed upon 10 states to 32 – a move South Sudan experts say was intended to gerrymander boundaries along ethnic lines.

The opposition wants to return to 10 states, but the government is keen to continue expanding the number.

As part of the 2018 agreement, a commission was formed to settle the matter, but it has been unable to come to a consensus.

After Machar’s visit last week, both parties announced that a new committee would be formed to investigate the issue.

“If there is no consensus on the number of states by November, we in the (opposition) will not be part of the formation of the government,” said Odwar.

Part of the problem in moving the peace deal forward is a lack of funds.

While Kiir pledged $100 million towards the process in May, a little over $10 million has materialised.

The international community, specifically Western countries, has abstained from financially supporting the process. It’s unclear why, specifically, but there have been numerous reports of alleged financial corruption.

Earlier this month the African Union Commission gave tents, and China donated 1,500 tonnes of rice for soldiers in cantonment.

"I want the peace deal to work,” Chris Trott, Britain’s ambassador to South Sudan, told TNH. “I worry that a further extension would undermine people's confidence, particularly the confidence of the South Sudanese who have been most severely affected by this conflict. People see this deal as an opportunity for peace and are desperately hoping that this peace will come.”

Who is still fighting?

While violence has declined across the country, fighting has continued between parties who failed to sign the peace deal.

Several clashes have occurred in recent weeks, according to a September report by the Ceasefire and Transitional Security Arrangements Monitoring Mechanism (CTSAMM) – the body charged with documenting violations and overseeing the implementation of the peace agreement. The report also noted that civilian buildings are increasingly being occupied by both government and opposition soldiers. 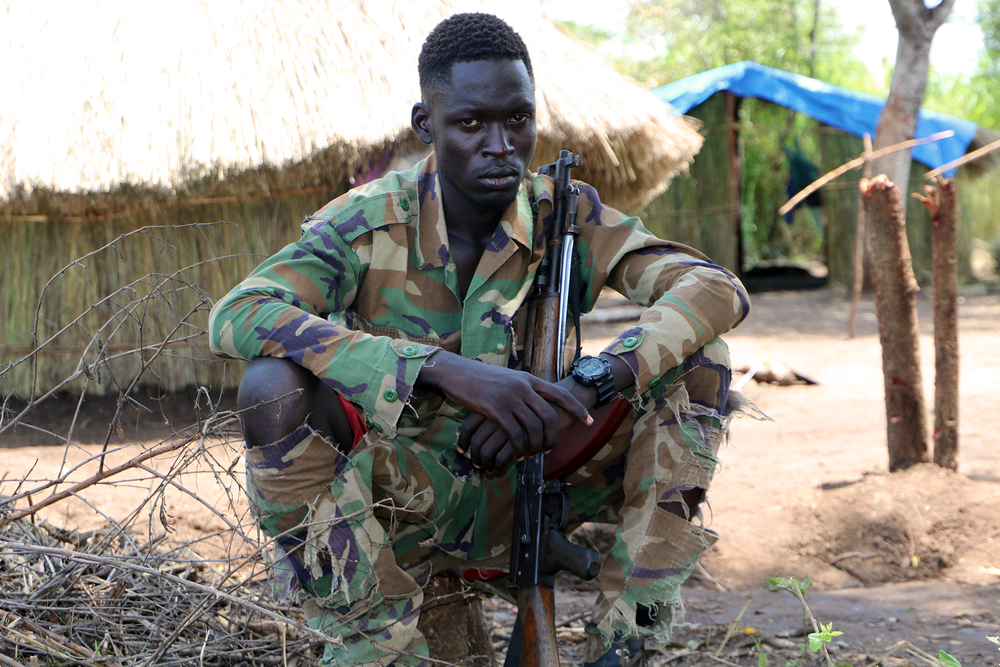 Sam Mednick/TNH
Godfrey Oyaka, a 29-year-old opposition fighter, sits on a wooden stool at a cantonment site, where many complained of harassment by government troops.

In August, three outlying armed groups – including Paul Malong, former military chief of staff and Thomas Cirillo, former deputy chief of staff in South Sudan’s military – joined to form the South Sudan Opposition Movements. Malong has been accused of directing the fighting in Juba in 2016 that killed hundreds, and of controlling an ethnic militia that numbers in the thousands.

In Juba, there has also been a sharp increase in harassment by armed men at checkpoints at night. Several security reports and local accounts detail men with guns detaining, robbing, beating, and sexually assaulting civilians, including international aid workers. At least five incidents have been reported since the end of August, although it’s unclear who’s behind the attacks.

As November approaches, the international community is calling on South Sudan’s government to urgently increase the “pace and the quality of implementation”, the EU said in a statement last week.

South Sudan’s government and opposition say Kiir and Machar are open to further meetings before November, but no dates have been confirmed.

Several diplomats and analysts who spoke on condition of anonymity because they were not authorised to speak on the record, say the deal will most likely collapse if the government tries to implement the agreement without the opposition.

As the peace deal limps on, South Sudan experts say even though violence has waned, there has been little to no political progress toward a lasting peace.

“Peace in South Sudan requires more than simply a reduction in violence. The peace agreement has been drained of its essential meaning through a failure of implementation of key elements,” said Klem Ryan, former coordinator for South Sudan’s UN panel of experts. “This lack of reform makes a return to violence almost inevitable.”

(TOP PHOTO: Two opposition soldiers sit on a bench in a cantonment site. One stumbling block to forming a coalition government is how to create a united army with forces from the opposition and the government.)