A new generation of voracious desert locusts is about to hatch in eastern Africa, and if not tackled now, will form swarms 20 times larger than the wave that has swept through the region since the beginning of the year, aid workers and experts are warning.

This week the swarms – the largest in several decades – reached Uganda’s Karamoja region from Kenya, and there is a risk they will also spread into Tanzania, even South Sudan, where some 60 percent of the population faces severe hunger after more than eight years of war.

As those swarms spread, a new generation of locusts is emerging in northern Somalia.

“Hopper bands are on the ground, which means in a couple of weeks we will have immature swarms,” Keith Cressman, senior locust forecasting officer for the UN’s Food and Agriculture Organisation, told The New Humanitarian.

In the rest of the region, bright yellow mature insects have begun laying eggs – as many as 80 per female. Left untreated, the newly-hatched hoppers will develop and swarm again, just in time for the planting season in March and April, devastating crops and pasture in a region where tens of millions of people already face extreme hunger.

“We’re running out of time,” Mark Lowcock, the UN’s top humanitarian official, told a briefing this week in New York. “We do have a chance to nip this problem in the bud, but that’s not what we’re doing at the moment.”

The new generation of locusts will be a 20 fold increase on their parents’ numbers, and by June, an eye watering 500 percent multiplication.

“We do have a chance to nip this problem in the bud, but that’s not what we’re doing at the moment.”

Locusts can consume huge amounts of vegetation – a single swarm eating roughly the same amount in weight as 35,000 people. Some farmers in Somaia and Ethiopia suffered a total crop wipe out at the beginning of the year.

For pastoralists like Benjamin Galwaha, the locusts are a new threat, just as he was hoping good rains would see pasture recover, fattening his remaining animals and allowing livestock prices to bounce back.

Two weeks ago, locusts briefly landed on the public grazing land outside his small town of Laisamis, near Isiolo. This week, he watched nervously as they returned, arriving in the evening and roosting before flying off in the direction of Marsabit and the Ethiopian border.

“This is now the fourth day we’ve seen them moving,” he told TNH. “We’re worried they’ll clear the plants and bushes where our animals feed.”

Locust swarms contain millions of insects and can travel 150 kilometres in a day. The only way to control them at that stage is aerial pesticide spraying – done first thing in the morning, before they move on, or at dusk when they land on bushes and trees to roost.

Experienced pilots like Marcus Dunn of Kenya’s Farmland Aviation will fly in at 30 to 40 feet dispersing the chemical in a fine mist that hangs suspended in the air for hours. He can treat several hundred hectares in a single load, and a 60 to 70 percent kill rate is considered good.

Key to that success are the ground teams who physically find the swarms and mark the GPS coordinates given to the pilots each morning.

But in parts of northeast Kenya, the challenge for the ground crews is its sheer remoteness. In some areas “you don’t see any roads for the last half-an-hour of the flight”, said Dunn.

With at least five spraying planes flying in Kenya trying to break up the swarms, there has also been a shortage of fenitrothion, the most commonly used insecticide. But the arrival this week of a new consignment of government-purchased fenitrothion has allowed the pace of the effort to increase.

“Spraying never stopped,” said Esbon Agira, a plant protection officer for the Ministry of Agriculture based in Isiolo, although it did slow down.

Rather than individual governments scrambling for insecticides, the FAO is now looking at centralising regional procurement, and, in Kenya at least, at helping to cover spraying costs – including pilot airtime and fuel. 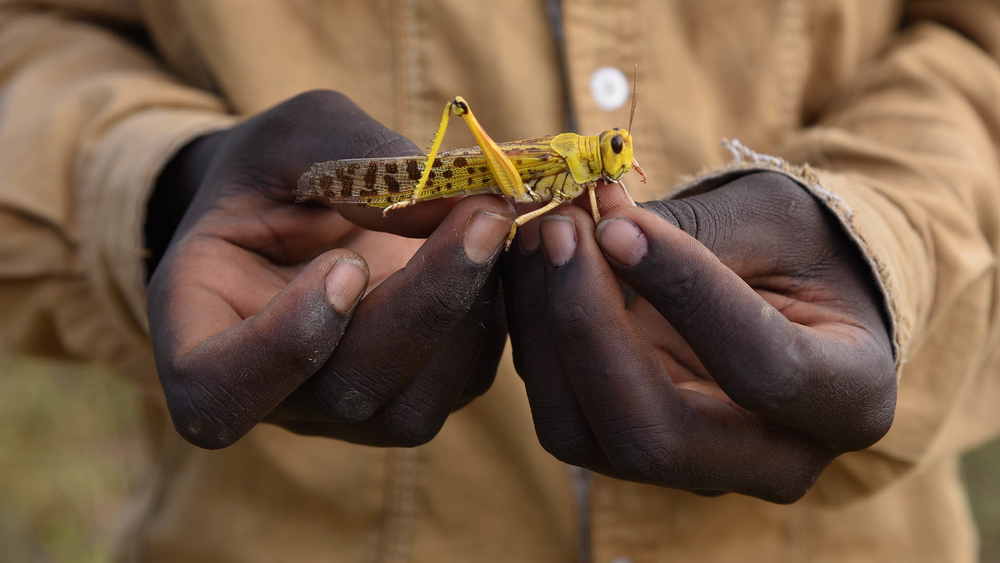 “We need to help them,” said Cyril Ferrand, FAO’s resilience team leader for Eastern Africa. “They’ve used their resources so far, but this is going to continue.”

Locusts live for about three months. The first mature generation is now laying their eggs before dying off, burying them 10 to 15 centimetres underground, where they are impervious to spraying.

“We have to wait for them to hatch,” explained Agira, and then it is a relatively simple job of killing them on the ground, in the “hopper” stage when they can’t fly.

So far, 130 breeding sites have been mapped in Kenya. “That’s why the surveillance part is important,” said Ferrand. “We need to have that geo-location so we know where they are so we can do the ground control.”

Spraying in a warzone?

In Somalia, the country’s insecurity creates a whole new set of problems.

In the north of the country, control teams can’t reach breeding sites in the disputed Sool and Sanaag area between Somaliland and Puntland. In the south, territory controlled by the jihadist group al-Shabab is also off-limits, including to spray planes.

Earlier this month, the government declared a national emergency – but in a country that has been at war for almost three decades, where the reach of the federal government and semi-autonomous administrations is weak, that does not mean that much.

“As you know, we don’t have airplanes to spray the locusts,” Deputy Minister of Agriculture Hamud Ali Hassan told a press conference on 2 February. “We are lacking all resources, including the expertise to prevent a humanitarian disaster.”

Farmers like Mohamud Nur Ali in Dhusamareb, the capital of central Galgaduud region, have clubbed together to try to cover the costs of spraying their fields.

“If the locusts did not invade us, I could feed my family of 10.”

“We don’t have enough pesticides and spray equipment to stop the locusts from ravaging the crops,” he told TNH. “But we are trying to contain it.”

All Mohamed Moalim Yusuf and his wife could do when the swarms came at the start of the year was stand in their farm in Tiyeglow, in the southwest region of Bakool, and throw stones and beat drums to try to scare the locusts away. Yusuf lost half his maize crop.

“You cannot stop thousands of locusts invading,” he said. “If the locusts did not invade us, I could feed my family of 10 and would also sell some of the maize, but now I have [nearly] nothing. This is the worst I have ever seen in Bakool region.”

Kenya’s cropping season starts in March with the arrival of the new rains.

At the same time, the winds in East Africa shift, and start blowing south to north. Those winds are likely to carry the locusts in Kenya back into Somalia and Ethiopia, in time for their slightly later planting period.

“The timing of the rains and the winds and locust breeding is all interconnected,” said Cresswell, although he admitted that forecasting their migration is not an exact science.

The crunch time will be April as the shoots of the new crops appear – an irresistible bounty for surviving locusts.

“We will know how successful the spraying was in April; then we will know how much support will be needed for the farmers,” said Ferrand. Satellite imagery can also tell how much damage has been done to rangelands.

If the June harvest is lost, farmers will have to wait until the next harvest in December – a new catastrophe.

The FAO appealed last month for $76 million to help tackle the locust crisis in Ethiopia, Kenya, and Somalia. That includes a pot of money for “livelihood support” – providing cash interventions to keep farmers on their land.

So far, the FAO has received $20 million – half of that from the UN’s Central Emergency Response Fund.

Ferrand believes the appeal total needs to increase, as Uganda and potentially South Sudan and Tanzania may also need aid.

But his biggest concern is the time it takes to turn donor pledges into money for the locust control teams.

“In Puntland, the second generation will be flying in two weeks’ time – you’ll be just left watching from the ground as they take off.”