Take our short survey.
GOMA, The Democratic Republic of Congo

As the Democratic Republic of Congo grapples with the second deadliest Ebola outbreak in history, aid groups say a host of other emergencies – from renewed conflict and mass displacement to health epidemics like measles and cholera – are being neglected despite mounting humanitarian needs.

On 19 June, the World Health Organisation issued an appeal to international donors to assist with a $54 million funding shortfall in the Ebola response, but aid workers have told The New Humanitarian that the funding picture for the other emergencies is just as – if not more – bleak.

Alongside the Ebola outbreak that has now killed more than 1,500 people and dominated news from Congo, an outbreak of measles has claimed 1,879 lives, at least 276 have died due to cholera, and hundreds of thousands have been displaced by renewed and ongoing conflict. 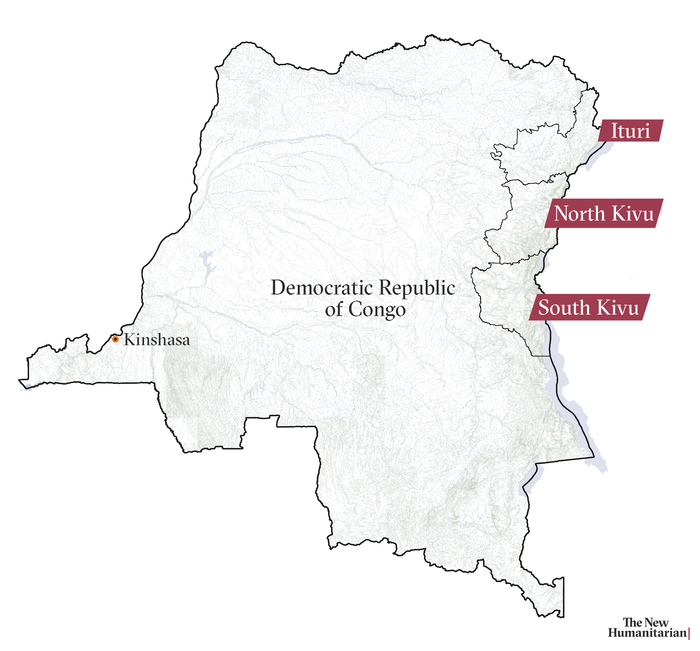 Since disputed elections saw Félix Tshisekedi replace Joseph Kabila as president of Congo in January, several rebel commanders have surrendered or been arrested, and some combatants have shown willingness to demobilise. In April, Tshisekedi pronounced “the time of armed groups is over”.

But violent conflicts have continued across the country’s eastern provinces of Ituri, North Kivu, and South Kivu, where Congolese militias and rebel groups from Burundi and Rwanda are engaged in deadly turf wars amplified by regional tensions between the different Great Lakes countries.

“The real issue is the fact that these populations have seen cycles of displacement for decades,” said Sarah Terlouw, country director for the International Rescue Committee. “It’s so many people; there is so much displacement and [a] staggering amount of need across DRC.”

Aid groups say the Ebola outbreak is stretching their limited capacity to tackle these other emergencies in the midst of a deteriorating humanitarian situation.

For example, health workers in North Kivu were so consumed by responding to the Ebola epidemic that measles vaccinations were interrupted.

Key aid programmes like the Rapid Response to Population Movements (RRMP) – which is managed by UNICEF and assists vulnerable people forced to flee their homes following conflict – are still awaiting funds for future interventions, The New Humanitarian understands from a source with knowledge of the RRMP, who would not be quoted by name.

“Nobody denies that Ebola is a huge issue,” said Terlouw. “But it feels quite frustrating that the resources going to Ebola are not even close to the resources we need to address the other problems.”

This briefing summarises the humanitarian needs overshadowed by Ebola, and the shifting security dynamics in eastern Congo.

The energy and attention directed towards Ebola have already led to prevention measures for cholera and measles being overlooked despite these diseases costing more lives than Ebola.

“When Ebola arrived, a lot of health workers began working in the [Ebola] response,” Mustafa said. “The frequency [of vaccinations] diminished and a lot of children were not vaccinated.”

Poor living conditions and constant movement of displaced people have contributed to the spread of measles, which, like Ebola, is contagious and can easily pass across a nearby, porous border into Uganda. Those most at risk are children: 69 percent of cases are among those aged under five; and if they are malnourished there’s increased risk of mortality.

Cholera has also cropped up in areas close to Lake Kivu and Lake Albert in both North Kivu and Ituri provinces. During the dry season many people living in these areas take water from the lakes, where vibrio cholerae – the disease-giving bacterium – is present.

There have been 1,820 cases in North Kivu since the start of the year. “The mortality rate isn’t as high [as Ebola], but the number of people impacted is massive,” said the IRC’s Terlouw.

The cholera and measles outbreaks are both underfunded. Just in order to restart its routine vaccination plan, the Ministry of Health says it needs $800,000. On 25 June, the ministry began vaccinating 22,000 children aged between six months and fifteen years of age in Kamango, but it requires more funding in order to scale up the campaign.

Other preventable illnesses are also killing people, according to the medical charity Médecins Sans Frontières, which conducted three recent mortality surveys in the conflict-torn province of Ituri. Alongside measles, the survey found that people are mainly dying from malaria and diarrhoea.

Meanwhile, reports from the World Food Programme show that over half the population in both North Kivu and Ituri are food insecure. In total, 7.7 million people are severely hungry in Congo.

Many Congolese communities in Ebola-affected areas are confused about why the virus has triggered such an influx of aid when more common treatable diseases, as well as hunger and conflict, kill so many with so little attention.

This inconsistency is one of a number of factors that has fuelled distrust between local communities and Ebola responders, who have faced repeated attacks by unknown armed groups.

“These attacks cause the virus to spread within communities, meaning more efforts mobilised to manage the epidemic and less efforts for other pressing needs, thus creating a vicious cycle,” said one aid worker in North Kivu, who was not authorised to speak to the media and could not be named.

Violence by armed groups and military operations in Congo’s North Kivu province are forcing tens of thousands to flee their homes every month. In April, 60,000 people were displaced following clashes in Kamango, near the Ebola-affected town of Beni, while 50,000 people were uprooted in Lubero territory. A further 28,000 people have been displaced around Mweso, in Masisi territory, since January. North Kivu has borne the brunt of the Ebola outbreak, with more than 2,000 confirmed cases to date. 1,168 measles cases and more than 1,800 cases of cholera have also been reported since the beginning of the year.

In June, a series of mass killings swept through Congo’s northeastern Ituri province, leaving hundreds dead and 300,000 displaced, including thousands who have sought safety in neighbouring Uganda. The UN’s World Food Programme has said it will triple the amount of food aid and cash support for displaced people in the coming months. There are fears the violence could complicate Ebola relief efforts, with 219 confirmed cases reported in Ituri since the outbreak began. Displaced people are also facing a measles epidemic, diarrhoea, and an “extremely high prevalence” of malaria, according to the medical charity, MSF.

In South Kivu, clashes between armed groups and intercommunal conflicts have triggered the displacement of more than 125,000 people in recent months. Analysts say the local violence overlaps with broader regional tensions, particularly between Rwanda and Burundi, and could lead to new proxy conflicts. There have been 6,852 measles cases in the province and 39 deaths since the beginning of the year. In total 560,000 people are in need of humanitarian assistance in the province and neighbouring Maniema.

Despite a reduction in violence and the surrender of armed groups following a rebellion that tore through the Kasai region in 2017, there remains a risk of further clashes according to the Congo Research Group, while urban criminality is on the rise. The expulsion of hundreds of thousands of Congolese living in Angola into Kasai last October has aggravated an already dire humanitarian crisis. The region has the highest number of malnourished people in the country, with 440,000 children under the age of four living with acute malnutrition.

In June, a series of mass killings swept through Ituri, leaving hundreds dead, 300,000 displaced – including a doubling to 8,000 of refugees to neighbouring Uganda in the past month – and shattering a period of relative calm that followed a similar outbreak of violence last year.

The UN’s World Food Programme, which was already supporting 116,000 displaced people in Ituri, announced on Tuesday that almost triple that number will need life-saving food and cash support in the coming months.

The Ituri killings have affected members of the region’s Lendu and Hema communities, who have a history of violent contestation, but analysts say the roots of the violence cannot be reduced solely to ethnic divisions.

The newly displaced have spilled into host communities, across the border into Uganda and into existing displacement sites in Bunia – the capital of Ituri province – heightening the risk of Ebola transmission.

Islamists and proxy wars in the Kivus

In North Kivu, the so-called Islamic State group has claimed a series of attacks by the Allied Democratic Forces, an Islamist rebel group founded in Uganda that now operates in Beni, one of the main Ebola areas.

Though there is evidence of financial links between the two groups, analysts say it is unclear whether IS is directly influencing the ADF’s ideology and operations.

A Congolese rebel group known as NDC-R has also been active in recent months – expanding its control across parts of North Kivu’s Masisi and Rutshuru territories and “posing a serious threat to stability”, according to the UN’s Group of Experts.

Led by Guidon Shimiray Mwissa, the group has clashed with the CNRD – a splinter faction of the FDLR, which is composed of Rwandan Hutu genocidaires – Nyatura groups and a Mai Mai group called APCLS. Thousands of civilians have been uprooted.

In South Kivu, clashes between armed groups and intercommunal conflicts have triggered the displacement of more than 125,000 people in recent months. Analysts say the local violence overlaps with broader regional tensions, particularly between Rwanda and Burundi, and could lead to new proxy conflicts in the long-suffering region.