When the recent Ebola outbreak erupted in the Democratic Republic of Congo more than eight months ago, rumour and distrust spread just as quickly as the disease.

Now, the outbreak has become the second deadliest since the disease first surfaced in 1976. Some 970 people have died, and more than 1,400 cases have been confirmed since August. On Sunday alone, a record number of 27 cases were confirmed on a single day.

A confluence of factors has made this latest outbreak more challenging than most to contain, raising the risk that it could spread to the major city of Goma or into neighbouring countries. 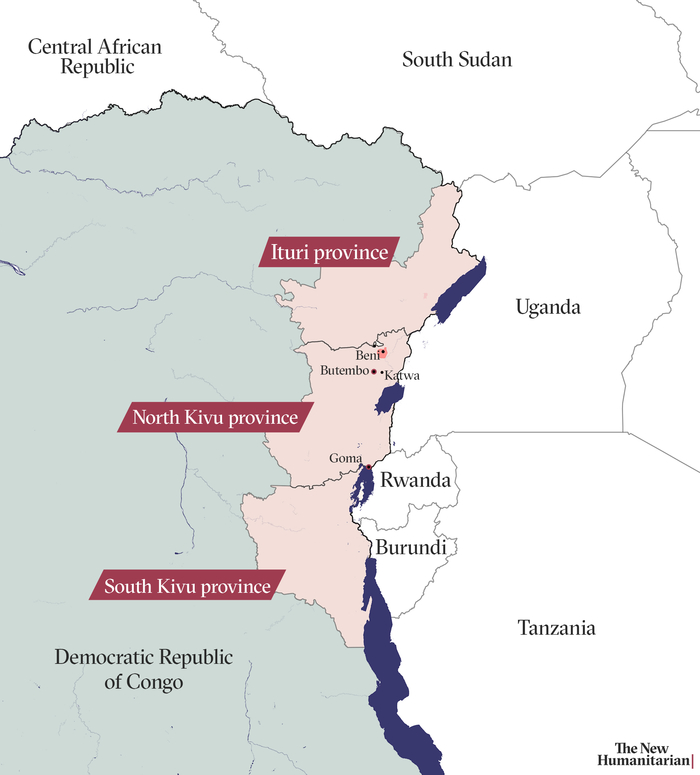 The Ebola zone in and around Beni and Butembo in North Kivu province is an opposition stronghold where historical grievances only deepened when the government postponed elections there late last year. The area has also seen conflict for decades, fanned by more than 100 militant groups jostling for control or battling government forces – violence that has spilled over to Ebola treatment centres. A Cameroonian Ebola doctor was killed at a centre in Butembo last month.

But also at play is the issue of distrust. Many are angry that Ebola has brought profits to some while other pressing needs have been ignored. Others either don’t believe the disease is real or think the government is using it to kill them. Some with symptoms have stayed away from treatment centres for fear it could make them worse.

Amid the scramble to contain the outbreak, social media such as Facebook and WhatsApp have provided a platform for all types of messages – true or otherwise.

“We are monitoring social media because that’s where most rumours are spreading,” Jessica Ilunga, a spokeswoman for the Ministry of Health, told The New Humanitarian. “We use that monitoring to adapt our messaging in the field and on local radio. We are working on setting up a special team just to monitor and create content adapted to social media.”

A study published in The Lancet in March found that people had been bombarded by misinformation. Sampling some 961 adults between 1 September and 16 September last year in the towns of Beni and Butembo, some 86 percent, said they’d heard Ebola didn’t exist. About one in four, or 230 people, said they didn’t believe it existed. Similarly, some 86 percent had heard the disease was being used to destablise the area, while more than one in three believed that to be true.

One Facebook page, “Véranda Mutsanga en Révolution”, now has 230,000 members. It is both a source of information – many users ridicule others for doubting the existence of the disease or offer tips for staying safe – while other users fan multiple conspiracy theories.

“There is no such thing as Ebola,” said one user. “It’s a government lie.”

Facebook has routinely been criticised for allowing false information to spread.

Recently, anti-vaccination Facebook pages spread fears that the measles vaccine could lead to autism, prompting thousands of parents to leave their children unvaccinated – a trend that is being blamed for a spike in measles cases. In March, Facebook announced it would shut down the pages after significant public pressure.

In places like Congo, people are even more likely to depend on Facebook for information as the company’s internet.org makes the platform, along with other select features, free to subscribers of its telecom partners through its Free Basics program. Facebook rolled back Free Basics in Myanmar after it drove users to the platform, and allowed for the rapid spread of misinformation about Rohingya Muslims.

Asked to explain what it was doing to combat the spread of fake news about Ebola, Facebook sent TNH this statement: “We're working hard to ensure we're stepping up our efforts to further understand the spread of misinformation in DRC with regards to the Ebola crisis, and continue to work with partners on the ground to better understand the issues and tackle them more effectively – our work in this area and investigations are ongoing.”

The World Health Organisation confirmed the Ebola outbreak in August, months before Congo was set to head to the polls for landmark elections.

Then-president Joseph Kabila announced in December that he would postpone voting in the northeast to prevent the spread of the disease. By the time voting took place in North Kivu, on 31 March, President Felix Tshisekedi had already been sworn in and had agreed to form a coalition with Kabila. The result was contested by losing opposition candidate Martin Fayulu, who accused Kabila of doing a backroom deal with Tshisekedi.

The delay in voting triggered rumours that Kabila’s government was behind the outbreak – either infecting opposition communities with the virus or exaggerating its spread to undermine his opponents at the polls. 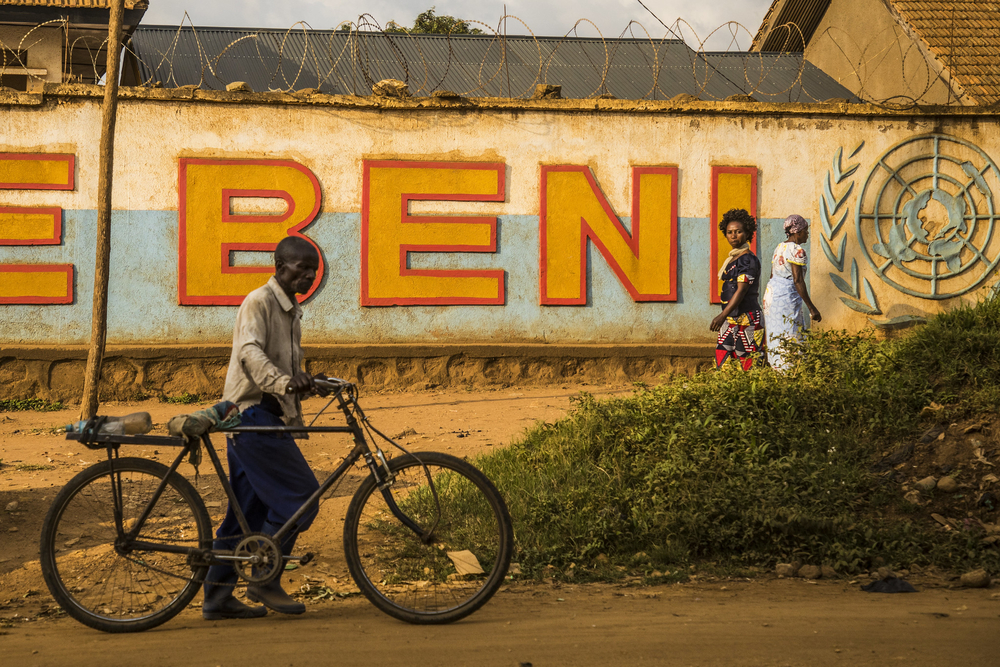 Vincent Tremeau/World Bank
The scene outside the hospital in Beni on 17 January 2019.

At least five Ebola treatment centres have been attacked since the outbreak.

After the Cameroonian doctor was killed on 19 April, attackers armed with machetes tried to burn down another treatment centre hours later. The Ministry of Health said the attackers left notes suggesting their motives were political or linked to their disbelief in the virus.

Officials say the suspension of operations in the wake of such attacks has only made it even more difficult to contain the disease.

“Now, the money is coming in, but it’s only for Ebola.”

Anger is also being driven by a perceived double standard. There’s been a huge effort to contain the Ebola outbreak – and large amounts of money spent on it in the region – but why not for more common diseases like tuberculosis or cholera, or to help more generally?

“Now, the money is coming in, but it’s only for Ebola,” said Kimberly Bennett, advocacy manager at the Norwegian Refugee Council.

Area hospitals and clinics, familiar to local communities, have long been underfunded. So the fact that well-funded Ebola treatment centres have suddenly sprung up – with accompanying deployments en masse of vehicles and personnel – has fuelled even more suspicion.

“We need to take into account the vast needs of the area, irrespective of the evolution of the disease,” stressed Pascal Hundt, a senior crisis manager at the International Committee of the Red Cross.

The Alliance for International Medical Action, or ALIMA, has tried to learn from its work during the 2013-2016 outbreak in West Africa, which killed more than 11,000 people.

They set up a treatment centre in Beni and a transit centre in Katwa. They also organised for transparent isolation cubicles so family and community members could visit without risk of infection but still see the type of treatment patients were getting.

Vincent Tremeau/World Bank
Health workers put their gloves on before checking patients at the Beni hospital.

“We wanted to make sure families could see what happened once a patient was in the clinic,” said Augustin Augier, chief executive officer of ALIMA.

Such efforts have not made ALIMA immune to the distrust and violence. After a treatment centre in Butembo was attacked, the NGO had to pull out of Katwa as a precaution against further attacks. After consulting with the community, ALIMA has since resumed its work.

But while great strides have been made since the West Africa epidemic in learning how to trace contacts and vaccinate infected people, and in how to treat patients better and more humanely, like ALIMA does, winning the information war has proved far harder in North Kivu.

In addition to Facebook, groups have ballooned on platforms such as WhatsApp and other chat rooms, distrusting the Ebola response – and worse – urging people who think they might have the disease to stay away from treatment centres.

“These communities have never seen this kind of mass mobilisation before,” concluded Segoni. “And they’re wondering: ‘Why now?’”

(*An earlier version of the story incorrectly stated that ALIMA set up two treatment centres in Katwa and Butembo. In fact, it set up one in Beni and a transit centre in Katwa)