The Kasaï region in the Democratic Republic of Congo is struggling to recover from two years of intense conflict. The influx last month of more than 300,000 people from Angola, most of them long-standing migrant workers, has made a fragile humanitarian situation worse.

Here’s our briefing on the risks for the region and the new challenges for the humanitarian response.

In attempts to clamp down on what it called illegal diamond mining operations, Angola’s government ordered the expulsion of more than 360,000 Congolese nationals, forcing them to flee in October into the Kasaï region of neighbouring DRC.

"This new shock is compounding an already dire situation in the same area that was the epicentre of the Kasaï crisis over the last couple of years,” explained Dan Schreiber, head of coordination in Congo for the UN’s emergency aid body, OCHA.

Congolese migrants and officials said the crackdown was violent, telling Reuters that dozens of people were killed, with the worst attacks occurring in Lucapa in Angola’s diamond-rich Lunda Norte province. Angolan security forces denied the allegations.

Where did they go?

Most of those expelled crossed into Kamako in Kasaï province, where aid organisations are responding to the tail-end of the Kamuina Nsapu insurgency that first erupted in 2016. Some of the returnees include refugees who fled violence in Kasaï over the last two years, the Norwegian Refugee Council said.

The NRC said conditions returnees face in Congo are “shocking”, including the risk of waterborne disease due to ineffective water and sanitation; thousands sleeping outdoors because of insufficient shelter; food prices tripling; and extortion of goods on both sides of the border.

"Hundreds of thousands of people have been robbed of their right to a dignified existence," said Ulrika Blom, NRC’s country director in DRC. "This is not a crisis that is about to begin, it is a full-blown emergency."

What has the reaction been?

While local communities have generally been welcoming to the returnees, OCHA’s Schreiber said skirmishes erupted in certain villages, mainly over the strain on limited food resources.

“Experience in the DRC does show that when you have a large influx of people arriving in an area it can generate tensions between host communities and the people who arrive,” he said.

Schreiber said OCHA has seen most returnees wanting to move away from the border areas and toward other destinations inland, which could help ease the humanitarian strain in Kasaï, but he also warned that more returnees could arrive from Angola.

“We don’t expect the first wave to be the last wave,” he said. “Expulsions from Angola are a cyclical phenomena that go all the way back to 2002-2003. It’s not a new phenomenon, but in this case we are seeing a major influx, and clearly the absorption capacity is not there.”

Why is their arrival in Kasaï in particular such a problem?

Kasaï was a relatively stable region in an unstable country – one currently dealing with multiple conflicts, an Ebola outbreak in North Kivu province, and one of the world’s most neglected displacement crises.

The situation in Kasaï changed dramatically in 2016 when conflict erupted between the Kamuina Nsapu anti-government movement and Congolese security forces. The inter-communal clashes spread far and wide, soon engulfing the entire region. 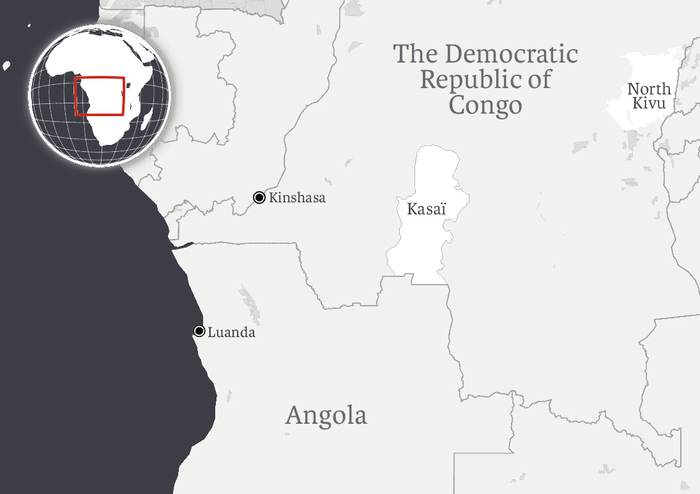 The conflict escalated in 2017, with massacres and mass graves, as well as general insecurity marked by banditry, and poor harvests that led to food insecurity and malnutrition.

An estimated 5,000 people have since been killed and more than 1.4 million displaced.

Toward the end of 2017 and into 2018, the crisis eased slightly, as national authorities regained control over large parts of the region. Despite isolated bouts of violence, aid groups say most militias have been formally disbanded and displaced communities are tentatively returning home.

“But those returns are accompanied by many needs, because people are returning to burned villages, destroyed homes, and a lot of destruction,” said OCHA’s Schreiber.

Two years of violence and displacement also mean locals have been unable to grow crops for three seasons, which has led to concerns over malnutrition. “We have really seen food insecurity skyrocket. So even in areas where returns have occurred, humanitarian needs have not come to an end,” Schreiber added.

Although the current influx of people from Angola isn’t directly linked to the Kamuina Nsapu rebellion, aid groups are concerned about the implications of piling one problem on top of another in the same geographic area.

For the most vulnerable groups, specifically women and children, the challenges that affect those displaced by the insurgency also pose risks for the new returnees from Angola.

In May for instance, UNICEF reported that 400,000 children were “at risk of death” in the Kasaïs, because of food shortages.

Yves Willemot, a spokesman for UNICEF in Congo, said the rate of severe acute malnutrition among children living in the region has improved slightly since earlier this year but “remains challenging”.

“The security situation has clearly improved, but the impact on children is not ending in the short term,” he said.

Among those newly returned from Angola are 80,000 children. They now are also at risk, forced to walk long distances while exposed to inclement weather, hunger, and the threat of violence. Willemot said basic services are lacking for them, including access to drinking water, schooling, and treatment for diseases like malaria and measles.

Médecins Sans Frontières is among the NGOs initiating primary healthcare services for the recent arrivals, while also continuing interventions to assist the local population.

In a recent report, MSF documented alarming levels of rape in the Kasaï region, saying it treated 2,600 victims of sexual violence between May 2017 and September 2018; 80 percent of those interviewed said armed men raped them.

“The sexual violence committed in Kasaï was perpetrated largely by armed groups against non-armed people,” Philippe Kadima, MSF’s humanitarian advisor for the Great Lakes region, told IRIN. “Although the main conflict is over, we still see some violence happening in Kasaï.”

For the more than 300,000 returnees, he said there are clear humanitarian concerns, but also the risk of insecurity. “The question is, how do you keep people secure?”

What about the longer-term challenges?

Humanitarian needs remain critically underfunded in the Kasai region, said OCHA’s Shreiber, emphasising that beyond the immediate concerns are much broader needs in the region and the DRC as a whole.

He added that the humanitarian response must help minimise the long-term impact of the crisis on those affected.

“The longer we remain in this critical phase, the more we can expect to see humanitarian needs spiral out of control,” he said. “The current trigger of new humanitarian needs (the returnees from Angola) may be time-bound, but I think the impact will be lasting.”

Schreiber said the Kasaï region remains vulnerable because it faces particular challenges, including decades of underdevelopment and inaccessibility as a result of poor road infrastructure, and he urged more development actors to get involved.

“People in the Kasaïs are eager to rebound, to be back on their feet, and move on. There is no expectation that humanitarian assistance should continue forever in the Kasaï region,” he said. “People want to be autonomous, but what they need is support to build up their resilience and be able to move towards a situation where their most basic needs are met and they are able to think about their futures again.”