An obscure climate phenomenon in the Indian Ocean is contributing to an East Africa drought that is threatening the lives of millions of people, as famine looms.

It wasn’t until the 1990s that Japanese scientists discovered the Indian Ocean Dipole, a warm pool of water that migrates between western and eastern “poles” and affects atmospheric temperatures and rainfall. The phenomenon occurs incycles of positive (warmer) and negative (cooler) sea temperatures, but it has become more extreme in recent years due to climate change.

Save the Children warned yesterday that Somalia is “reaching a ‘tipping point’ that could be far worse than the 2011 famine, which claimed 260,000 lives.”

The drought is the culmination of two years of below average rainfall combined with the “most extreme El Niño in 50 years”, according to OCHA. El Niño is a cyclical phenomenon that affects weather patterns around the world.

“But there is now another challenge: the negative Indian Ocean Dipole,” said OCHA.

Climate change is making theIndian Ocean Dipole and other phenomena more “extreme”, according to Robert Marchant, head of the Institute for Tropical Ecosystems at Britain’s University of York.

“The warming-cooling shifts will be more pronounced, which means more extreme conditions on land,” he said in a phone interview. "Those quite severe droughts are becoming much more normal.”

There are no easy answers for governments searching for ways to mitigate the risks of more frequent and intense droughts, he said. But measures could include better pasture management for herders, and changing the kinds of crops farmers grow.

Chief among those is maize, which came to Tanzania from Latin America in the 1600s, said Marchant. It has largely replaced traditional crops of sorghum, millet and cassava, which are “much more resilient to climate volatility”.

Governments can also make better use of climate models produced by scientists, he suggested. But he added that climate change is extremely complex, making it difficult to produce models that always correctly predict climate events.

In the more immediate term, governments and aid agencies are going to have to deal with the famine now bearing down on East Africa.

“It’s coming,” said Marchant. “Hopefully, things are being put in place that will help.” 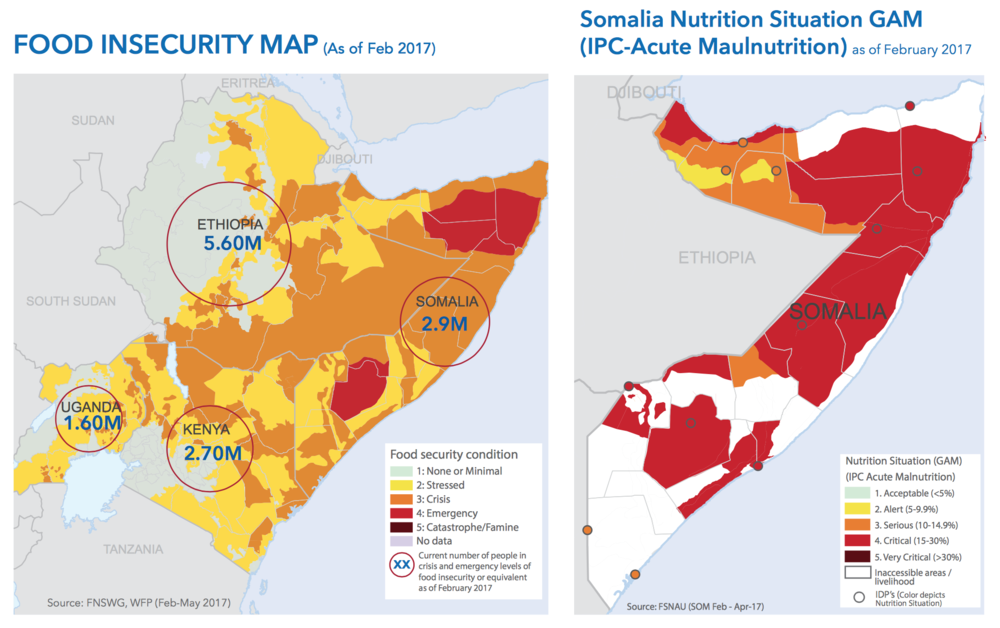 Warnings from aid groups have been getting more and more urgent.

The UN’s refugee agency, UNHCR, and the World Food Programme said on Monday that two million of those facing “critical shortages in food assistance” are refugees who are often forbidden from working to provide for their families. The agencies said the number of refugees in Africa has grown from 2.6 million in 2011 to almost five million last year, but donor funding has not risen accordingly and food assistance has been cut.

The UN is appealing for $825 million for Somalia alone to fund “life saving assistance” until June.

“The drought situation is deteriorating rapidly,” said Peter de Clercq, the humanitarian coordinator for Somalia, in a statement. “We are at a critical phase and we need to act fast and efficiently to avoid the worst.”