For those who recently watched images of the Israeli bombardment in Gaza, the wide open hills of the Jordan Valley in the West Bank appear as a stark contrast.

Flocks of sheep accompanied by their herders cross the hillsides, home to some of the most fertile land in all of the occupied Palestinian territory (oPt) and unrivalled even in Israel.

And yet despite the abundant land and resources, Palestinians living in the Valley are some of the poorest in oPt, lacking even the most basic infrastructure.

The Jordan Valley is marked by a patchwork of zones in which Palestinians are allowed to live, which leave little room for manoeuvre.

“These restrictions have removed their ability to be self-sustaining. They are in an artificial humanitarian crisis; they have the capacity, the training, the education, but because of man-made restrictions, they are made vulnerable,” Ramesh Rajasingham, head of the UN Office for the Coordination of Humanitarian Affairs (OCHA) in oPt, told IRIN.

For a start, much of the Valley is officially out of bounds to Palestinians - 44 percent is marked as closed military zones (including so-called firing zones) and nature reserves. An additional 50 percent is controlled by Israeli settlements, regarded as illegal by many in the international community. That leaves only 6 percent for Palestinians, according to figures from Save the Children.

A second layer of restrictions reinforces this exclusion: Under the Oslo peace accords, 90 percent of the Valley was labelled “Area C”. In this area of the West Bank, Israel retains full civil and military control, enabling it to restrict Palestinian movement, construction and development projects.

“A few years ago, communities in Area C were self-sustaining; they could trade, sell produce, graze their animals, and move around freely,” said OCHA’s Rajasingham.

Many of the Bedouin farming communities in these zones predate the Oslo accords and the firing zones (set up in the 1960s), but they now find themselves increasingly excluded or living a precarious existence.

Most Palestinians there live without sufficient access to clean water, while Israeli settlements nearby have plentiful water supplies subsidized by the Israeli government.

Within the firing zones, more than 90 percent of the Palestinian communities are water scarce with access to less than 60 litres per person per day.

Food security in Area C is 24-34 percent for the shepherds, many of whom live in the firing zones.

Army vehicles speed down the roads during the day, artillery fire echoes from nearby, while at night military helicopters circle overhead.

Seven weeks ago during the eight-day bombardment in Gaza, tanks, army jeeps and military camps were in the Valley as part of a training exercise carried out by the Israeli Defense Forces (IDF), which their spokesperson’s unit told IRIN was necessary to “prepare for various security scenarios”.

They added that it was important for “intruders” to “be kept clear from the military areas… for the security of both soldiers and Palestinian civilians.”

“The army came and said ‘if you don’t leave this area for the training exercise, we will demolish your houses. You must go to Tayasir, which is far away from here,” Eid Ahmad Musa al-Fakir (68), a herder from the village of Hamamat Al-Maleh, told IRIN.

“It was hard for us to go there with our sheep and our belongings and it’s now winter, we don’t have so much money and the animals are breeding. So we moved just a short distance away to the roadside.”

In preparation for the military exercise, the Israeli army issued more than 40 eviction orders to Palestinian families in the northern Jordan Valley living in or near Firing Zone areas.

Bedouin children wander away from their home in al-Hadidiya village in the West Bank, which is now within a closed military zone claimed by the Israeli army 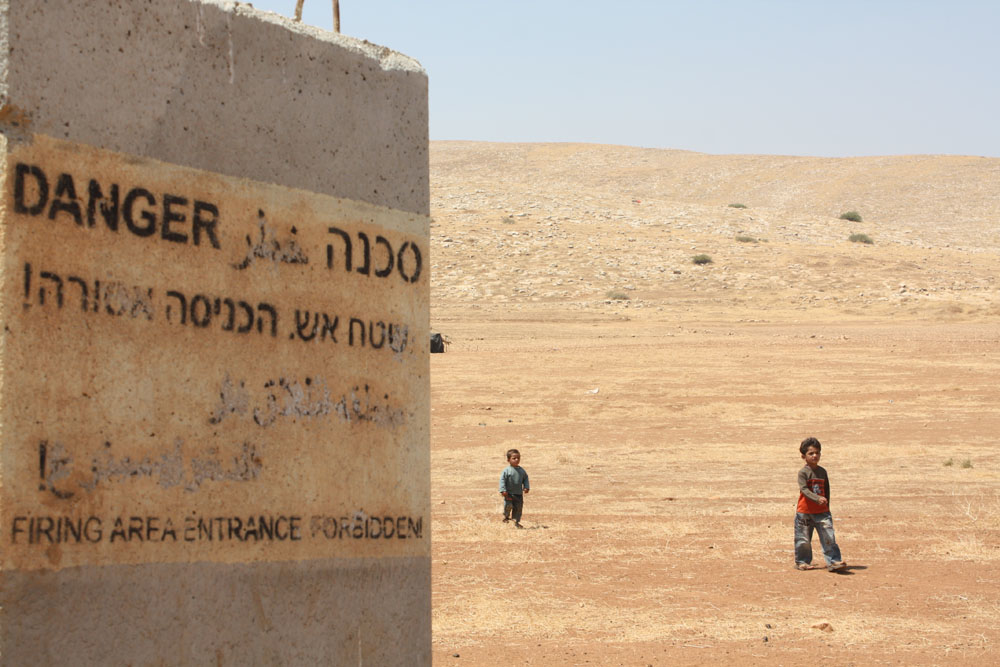 A number of Palestinians returned to their homes, but Al-Fakir and his family are unsure of when they will go back: “The army told us that even if the training exercise is over, we should not come back. Here by the roadside it’s hard for our animals to graze, but we are afraid to return and find that we have to move again,” he said.

This displacement and others like it this year have left Palestinian families in the area reporting a “general environment of fear and uncertainty, particularly among children”.

Israel’s Coordination of Government Activities in the Territories (COGAT) did not respond to interview requests for specifics about the recent military exercise.

Some 5,000 Palestinians, mostly Bedouin and herding communities, live in designated firing zones across the West Bank, according to OCHA.

Palestinians living in firing zones are among the most vulnerable populations in the West Bank with little access to services such as health care and education, and no basic utilities like electricity and sanitation.

Access to firing zones is prohibited to Palestinians without permission from the Israeli authorities and cover about 18 percent of the land in the West Bank.

Residents in these areas are frequently issued with eviction and demolition orders even though “many residents report that there is little or no military training in areas where they reside.”

Where Palestinians have tried to construct, they face opposition from the Israeli government.

The Israeli permit regime, which some analysts say contravenes international law, makes daily living in Area C even more difficult for Palestinians as they are required to apply for permits to construct structures like water cisterns, latrines and houses.

Permits are rarely granted, forcing Palestinians to forego them and risk demolition.

All these restrictions and layers of regulation make daily life in the Jordan Valley precarious.

According to the Ma’an Development Centre, an independent Palestinian development and training institution, “Israel has carried out more demolitions in the Jordan Valley than anywhere else.”

A Palestinian woman inside a tent near Al-Maitah. Applications submitted by Palestinians living in Area C of the Jordan Valley to build are rarely accepted, and demolitions of tents such as this one by the Israeli authorities occur frequently 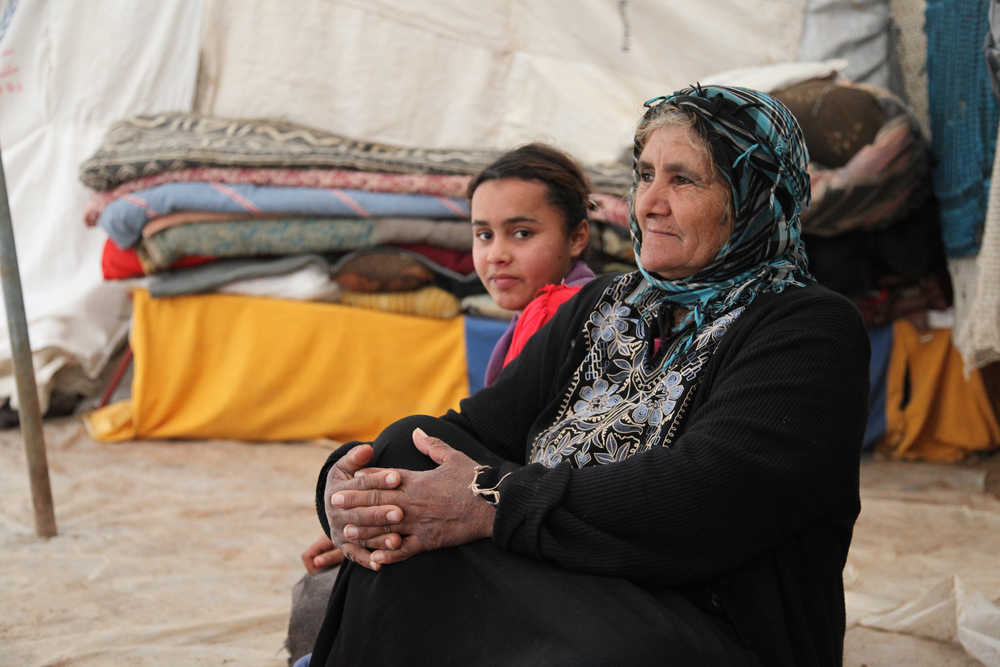 OCHA’s factsheet on Jordan Valley settlements says that in 2011 alone there were 200 demolitions of Palestinian structures, including homes, resulting in the displacement of 430 people.

In some instances, a building is demolished by the Israelis, rebuilt by Palestinians and then demolished again.

Israeli settlers on the other hand are given financial assistance by the Israeli government to encourage settlement expansion.

The settlement of Tomer, south of the Palestinian village of Fasayil, specializes in the production of dates.

According to the Ma’an Development Centre, the settlement has become “a flourishing community with a modern infrastructure, prosperous industries, and reliable social services” as a result of “tax breaks, grants and other benefits”.

By contrast, “[Palestinian ] homes in Fasayil are made of tin, plastic and mud” and the community has faced four waves of demolitions since January 2011.

There are 10 Israeli settler communities partially or completely in the firing zones of the West Bank, though they almost never face threats of demolition.

A strategy of control?

Many in the Jordan Valley see military exercises in firing zones as well as repeated house demolitions as an Israeli strategy to empty the land of Palestinians and confiscate it for further settlement expansion and agricultural production.

“This is a mountainous area, with [Israeli] people scattered across the place. Their purpose is to make us all leave so that they can take it for themselves,” Fatima Abid Aouda Soraiya Fakir, one of the women displaced from the village of Al-Maitah, told IRIN. “They are afraid that we will become established here if we stay, like the village of al-Aqaba which now has schools and clinics.”

Al-Fakir, the Palestinian from Hamamat Al-Maleh, agrees. “The army wants everyone in this area to move,” he said. “It’s happening slowly and over time, but they definitely do not want us here.”

But the spokesperson’s unit for the IDF said all structures erected in closed military zones were illegal.

Chris Whitman from the Ma’an Development Centre agrees that the recent exercise is a method for Israel to consolidate its power in the valley.

“To have people who are outside the system, herding and moving around is [taken as] a form of defiance,” he told IRIN.

“So Israel makes sure these people know the boundaries; makes sure they are not connected to water or electricity; ruins the area with artillery so that the animals cannot graze; and gives them the idea that their existence is temporary.”

The IDF declined to respond to these allegations.

Whitman added that Palestinians in the Jordan Valley have become increasingly impoverished over the past 20 years.

Those that have family elsewhere, or can afford to, may eventually choose to leave for larger towns or cities. But many rely on their animals for survival and cannot move elsewhere.

The Palestinians in Al-Maitah say that despite their recent experience, they are staying put.

“We are here now and we just want the Israelis to leave us alone,” Ahmad Eid Soraiya Fakir from Al-Maitah told IRIN. “We are willing to live in any condition if we have to, but we will not leave.”