The body count continues to stack up in West Africa’s Sahel region. On Wedneday, Islamist militants killed 71 soldiers and wounded 12 others in western Niger – the deadliest attack against the Nigerian armed forces in years. Militants have steadily expanded their footprint in the country’s Tillabéri and Tahoua regions, which share a border with both Mali and Burkina Faso, creating a humanitarian crisis that has now seen almost 80,000 people displaced. The unrest – less visible than in neighbouring states – represents a second border crisis for a country still facing the longer-running threat of Boko Haram in its southeastern Diffa region. After Wednesday’s mass attack, a summit for Sahelian leaders due to take place in France this month was postponed until early 2020. More than 100 Malian soldiers have also died over the past three months as Sahelien states struggle to cope with the spiralling violence. Delve into our three-part series on western Niger for more, or our wider Sahel coverage.

The Conservative (Tory) Party win in British elections could spell major changes to UK international aid. According to the Financial Times, plans are being drawn up for Prime Minister Boris Johnson to merge the UK’s foreign office and its aid ministry, the Department for International Development (DFID). Elements of the Tory party have long been sceptical about the use of British aid money – although Johnson’s manifesto recommitted the government to the 0.7 percent of gross national income required by law to be spent on foreign aid. Some senior Conservatives believe the $19.4 billion aid pot could leverage trade and foreign relations priorities, especially post-Brexit. The UK has sought without much success to change international rules to loosen the definition of what can and can’t be counted as aid. Leading NGOs in the UK are calling to keep DFID separate.

The usually murky brown waters of the Mekong River have turned an eye-catching marine-blue in parts – and that’s a worrying sign. The relatively bright hue is caused by extremely low water levels, a result of a worst-in-years drought and upstream hydropower dams. The clear waters could have far-reaching impacts on food security for communities that depend on the river. The water clarity is allowing microscopic algae to build up, which could affect food supplies for insects, cascading down the food chain and reducing overall fish catches, the regional Mekong River Commission warns. It’s an example of how water could be a future flashpoint in the region: the river is integral to life in Laos, Thailand, Cambodia, and Vietnam. But upstream dams and reservoirs, especially in China, have a strong influence on water levels, and climate change could make seasonal rains and drought even more volatile. For now, it’s still very early in the Mekong region’s dry season: a reprieve isn’t expected until the monsoon rains kick in – assuming they’re on time, that won’t be until late May 2020 – or if water is released upstream in China, the MRC says.

As the COP25 summit wound down on Friday, it was no surprise that the issue of including disaster relief and rebuilding funds in global climate treaties continued to be politically fraught: the battle over new funding for disaster damages had been divisive as diplomats ground through a final week of negotiations at the yearly UN climate meetings in Madrid. A draft text being negotiated on Friday established a new network to improve “technical assistance” for averting disaster risks, but contained no language about new financing for so-called “loss and damage”. In the lead-up to the meetings, vulnerable countries had set their sights on securing new commitments, arguing that existing funding to reduce greenhouse gas emissions and adapt to disaster risks wasn’t enough to account for the damage already caused by climate-fuelled disasters. These disasters already force millions from their homes each year, and the impacts of climate change will make storms, floods, drought, and other threats more unpredictable and more intense in the future.

One year ago today, representatives from Yemen’s government and Houthi rebels shook hands – but did not actually sign – a deal, known as the Stockholm Agreement, that was hailed by many as a real path towards ending the country’s long war. There was a lot at stake: The Saudi Arabia and UAE-led coalition was fighting its way up the Red Sea coast towards the port city of Houthi-held Hodeidah, and humanitarians warned that an offensive on the city could throw Yemen into famine. Twelve months later, and while a full-fledged battle for Hodeidah was averted, most parts of the deal never really came to pass, and millions of Yemenis are still suffering. That includes people in Hodeidah: a statement released this week by several international NGOs working in Yemen reports that 799 civilians have been killed or injured in Hodeidah province since Stockholm – the highest number of casualties anywhere in the country.

Who you going to trust?

Trust in aid is variable, 7,000 aid recipients in seven countries indicated in surveys carried out by Ground Truth Solutions. On average, 70 percent of respondents said that aid providers generally act in recipients’ best interest. But in Lebanon, Uganda, and Haiti, respondents were more doubtful than counterparts in Afghanistan, Bangladesh, Iraq and Somalia. At the Red Cross and Red Crescent movement’s once-every-four-years get-together in Geneva this week, “trust” was among the key themes. The term served as an umbrella that included transparency and preventing misconduct, as well as the need for more respect between the movement and its clients. In that vein, the groups have banned the word “beneficiary” to reduce any impression of condescension. For a look at what participants from over 190 national societies and the states that back them discussed at the world’s biggest humanitarian alliance, take a look at TNH director Heba Aly’s takeaways from her time at the event and watch next week for our interview with a top Red Cross official.

CAMEROON: A forgotten front in the insurgency of the Nigerian jihadist group Boko Haram is the Far North Region of neighbouring Cameroon. Over the past year, at least 275 people have been killed – including 225 civilians – in a resurgence of extremist violence in the remote area, says Amnesty International. Civilians have also been mutilated and kidnapped.

THE DEMOCRATIC REPUBLIC OF CONGO: The number of Ebola cases in eastern Congo has risen to 31 so far this month – almost equivalent to the entirety of November. The spike follows weeks of protests and militia violence, and attacks on Ebola health centres that left four response workers dead.

EAST AFRICA: About 800,000 children in East Africa who’ve lived through emergency situations will get opportunities for “educational play” through a consortium led by the NGO International Rescue Committee (IRC) and funded with $100 million from the LEGO Foundation. The award follows another $100 million grant IRC won to spend on refugee education with the US puppet show Sesame Street.

INDIA: Protests erupted in the northeast state of Assam as India’s upper and lower houses passed a new law making it easier for some non-Muslim immigrants to gain citizenship. Police reportedly shot two protesters and imposed curfews. Critics say the law is another discriminatory step targeting Muslims, after a years-long citizenship recount in Assam excluded nearly two million people, many of them Muslim. Assamese protesters aren’t demonstrating in support of minority Muslims, but pushing back against broader immigration.

MALAYSIA: A three-month-old baby in the Malaysian state of Sabah is the country’s first polio victim since 1992, health officials announced this week. The case of vaccine-derived polio is genetically linked to an outbreak across the Sulu Sea in the southern Philippines, raising fears of a regional spread.

SOUTH SUDAN: The UN’s food agency has warned of a possible “famine” situation taking hold in South Sudan after heavy rains – which began in June – destroyed thousands of acres of cropland, washed away livestock, and disrupted markets and trade. US-funded famine monitor FEWS NET has warned of the same possibility should a resurgence of conflict occur in areas where food insecurity is already severe.

TURKEY/GREECE: Six people were deemed to have died of exposure this week after crossing the Evros River from Turkey into Greece. The route into Europe is little known but often deadly, and last year TNH profiled the Greek coroner who does his best to identify the many migrants and asylum seekers who perish attempting the journey.

Amid the chaos that is the Gathering and Departure Facility in the Libyan capital, Tripoli, one thing appears abundantly clear: it is not fit for purpose. Set up by the UN a year ago as a flagship transit centre for refugees en route for resettlement in other countries, it has become overcrowded, unsanitary, and dangerous, according to UN internal documents and several people familiar with the conditions. It’s possible that among the residents there are more unvetted migrants who bribed their way past the guards than registered refugees and asylum seekers. The UN’s refugee agency, UNHCR, now wants out of this $6 million experiment: as TNH reported this week, it is trying to persuade as many of the 1,150 residents to leave as possible, offering aid on the outside and telling them they can't try to register as refugees if they remain inside. UNHCR says 78 refugees were evacuated from the GDF this week, and while some have been convinced to leave and find a place to live in a city that has seen clashes since April, others can still enter through its porous gates.

Save one life, or improve many lives?

GiveWell, a US-based nonprofit that describes itself as an advocate of “effective altruism” in development projects, says it influenced over $150 million of giving in 2018. It had relied on its staff’s values (in a spreadsheet here) to calibrate its judgements. No more, thanks in part to a survey of 1,700 people in Ghana and Kenya that found low-income people want to keep their children alive more than they want to be better off. That information will now change the group’s approach: “We have provisionally updated our moral weights to place more emphasis on programmes that avert deaths (relative to those that reduce poverty),” a statement from the group noted. A value-for-money approach means uncomfortable trade-offs: saving life versus quality of life. 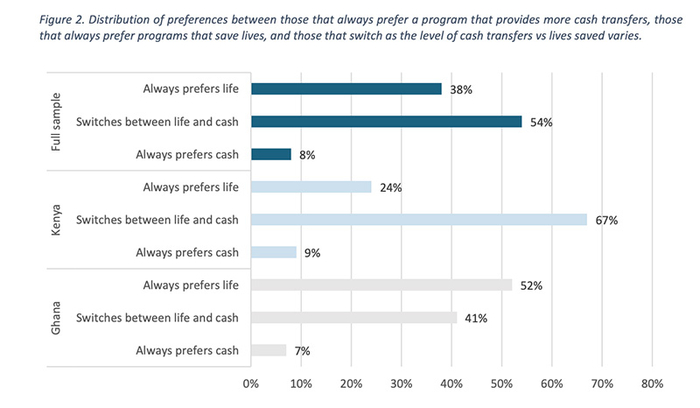