The dry months before the monsoon rains arrive are often tough for Cambodian fishermen and farmers. But with rivers drying up and drinking water running out, conditions have rarely been as bad as they are now.

The current drought is linked to El Niño, which has been disrupting weather patterns around the world. But the harsh conditions today might only be foreshadowing far worse to come. Climate change will continue to affect the Mekong Basin region, while future droughts are expected to be exacerbated by a string of major hydropower dam projects.

Experts fear that the present crisis could become the new normal for Cambodia and its neighbours, which have also been hit hard by record temperatures and a long period of extremely dry weather.

“The combined effects of drought, climate change and dam building are pushing the resources of the Mekong Basin to the brink of disaster,” said Maureen Harris, Southeast Asia programme director of the river protection organisation, International Rivers.

In Cambodia, water shortages are reported in 18 of 25 provinces and more than 93,500 poor, rural households are affected by the drought, according to the European Commission’s Humanitarian Aid and Civil Protection department. They include residents of “floating villages” on the Tonlé Sap Lake, which is fed by tributaries of the Mekong.

“This year is terrible. We cannot find any fish. No one is helping us, and we are almost starving,” said Kreun Phear, a fisherman who lives in Chong Pra Lay, a village built on the edge of the lake.

In the dry season, the village appears much like any other; but when the lake swells up to four times its usual size during the monsoon, the houses are designed to float on empty fuel drums. The lake and surrounding rivers provide Kreun Phear's community and many like it with everything: food, water, and their livelihoods.

According to the government's Fisheries Action Coalition Team, the lake is currently just 50 centimetres deep, compared to its usual depth of between 1.2 and 1.5 metres at the same time in previous years.

Talking about the drought, Youk Senglong, FACT's deputy director, told IRIN that Cambodia has “never experienced a natural disaster like this”.

In Thailand, farmers are struggling with drought and 21 people have died during a heat wave, while about two million people are short of drinking water in Vietnam. The low level of the river has also allowed saltwater to penetrate further upstream in Vietnam’s Mekong Delta region than normal, and 10 percent of the country’s rice paddies have been destroyed, according to the UN.

The UN says the Mekong is at its lowest level since records began nearly 100 years ago. The waters are almost half as high as the average level for this time of year.

That’s bad news for about 60 million people living in the Lower Mekong Basin region, of whom 80 percent depend on the river for food and livelihoods, according to International Rivers.

Climate conditions are largely responsible, but not entirely. The water level has also been affected by an explosion of dam building on the Mekong river, which snakes through China, Myanmar, Thailand, Laos, Cambodia and Vietnam.

There are six dams on China’s upper section of the Mekong already, and communities downstream have felt their impact, according to Harris of International Rivers. The organisation says that 11 more dams are planned on the Mekong downstream from China, including two in Cambodia, and the rest in Laos where two are already under construction. 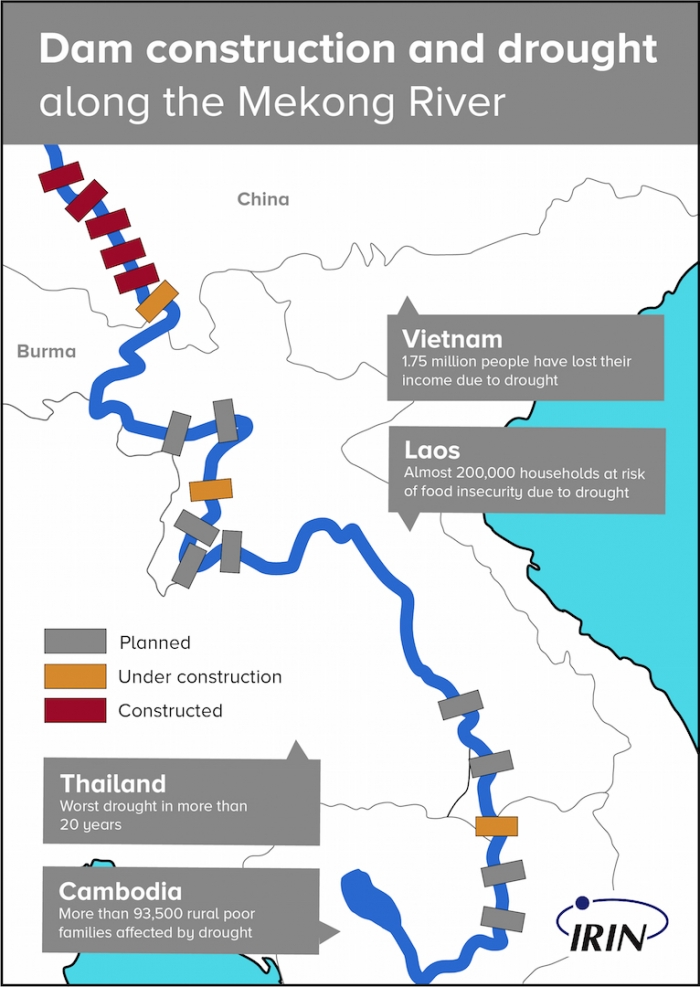 "If all 11 dams are built, it will convert the lower stretches of the Mekong River into a series of stagnant reservoirs and irreversibly alter the river system of one of the world's most important and iconic rivers,” Harris told IRIN.

Perhaps stung by the accusation that its dam building is to blame for worsening the drought, China established a partnership in March between the six Mekong countries. Called the Lancang-Mekong Cooperation, it aims to focus on development and encourage “good neighbourliness,” according to a statement after a heads of state meeting.

China’s other recent intervention was to release water from its Jinghong hydropower station in southwestern Yunnan Province to help the drought-stricken Lower Mekong Basin region.

Cambodian government spokesman Phay Siphan struck a conciliatory note, telling IRIN that the dams were not to blame for the drought, and noting that China had released water to aid its neighbours downstream.

However, Harris said the move showed China’s growing control over the region’s water resources. Thanking China for releasing water amounts to “ignoring the negative impacts China’s dams have had on communities living along the Mekong and their role in contributing to the effects of the drought”, she added.

The real problem is what lies ahead. Alongside the existing dams and the 11 major new ones planned, hundreds more are either under construction or in the planning along the Mekong’s many tributaries.

In the meantime, drought-affected communities in Cambodia are desperately awaiting the arrival of the monsoon rains. Even after they arrive, around the beginning of June, it will take some time before the situation returns to normal, warned Yi Kim Than, who works on drought response with Plan International.

“It will still be a few months before the ponds, streams and groundwater will fill up and people have water,” he said.

(PHOTO: A trench dug into a dry riverbed in seacrh for water in the area around Cambodia's Tonle Sap Lake in May)