Less than nine months since rebel groups in Central African Republic signed a peace deal with the government, violence is once again on the rise in the countryside and opposition to the agreement is building ahead of next year’s presidential elections.

Clashes in September between the FPRC and the MLCJ – two of the rebel groups that signed the February deal in the capital, Bangui – left at least 23 people dead and more than 24,000 displaced in one of the most serious outbreaks of violence this year.

And MINUSCA, the UN peacekeeping mission, recently launched a military operation against the Return, Reclaim, and Rehabilitation armed group, or 3R – a signatory to the deal that the UN says is continuing to attack civilians and carry out “illegal activities”.

The agreement is the eighth attempt to resolve a six-year conflict that began when the mostly Muslim Séléka rebel alliance overthrew the government of François Bozizé in 2013, triggering reprisals from the mostly Christian and animist anti-balaka. Both groups have since splintered into smaller factions.

As part of the peace deal, rebel officials – several of them accused of war crimes – have been granted 13 ministerial positions in a new “inclusive” government, and some have been appointed as military advisors to Prime Minister Firmin Ngrebada. 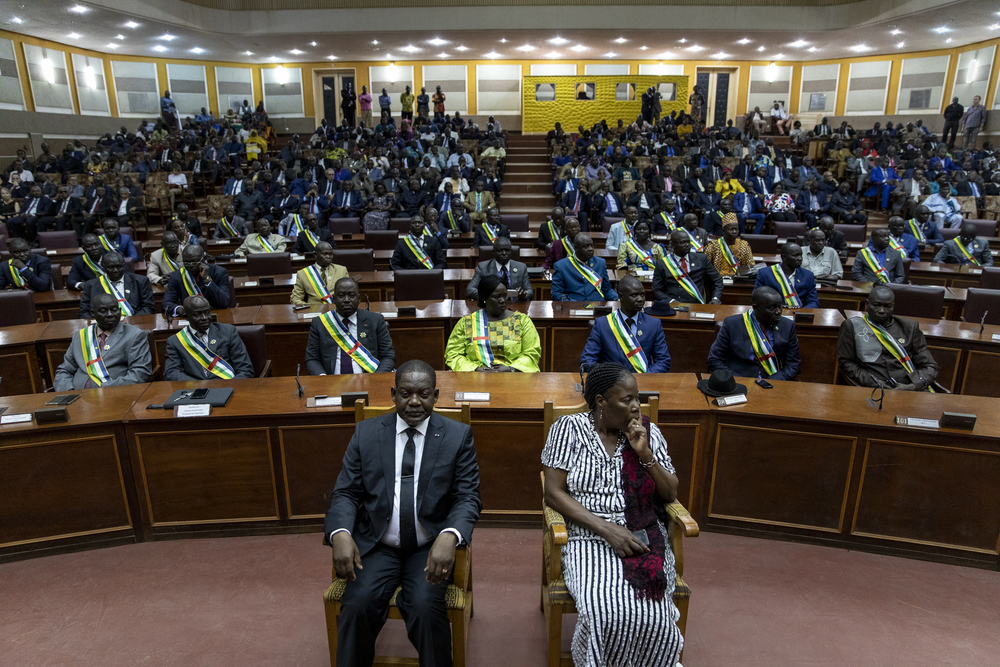 Adrienne Surprenant/TNH
Firmin Ngrebada, CAR's prime minister, sits at the front (left) of the National Assembly, as they launch the last session for 2019.

In August, the human rights division of MINUSCA, said the number of attacks and human rights abuses had dropped sharply compared to the same period the year before, while attacks on humanitarians have also decreased significantly.

But key provisions of the peace deal, such as mixed security units – merging rebel and government forces – have been slow to get going and violence is now rising in the provinces, where armed groups still retain almost blanket control.

The leaders of two main rebel groups have recently resigned from their positions as military advisers in the government; others are still jostling for territory; and a new armed group known as the PRNC has emerged in northern CAR and is threatening the agreement.

Anger at Faustin-Archange Touadéra’s government is building among some opposition parties and civil society groups who blame the president for conceding too much ground to the rebels. Tensions are only likely to rise ahead of presidential and legislative elections slated for December 2020.

For now, more than 600,000 people remain exiled in poorly funded refugee camps – most in Cameroon, Chad, and the Democratic Republic of Congo – while 580,000 more are internally displaced across CAR. Roughly 2.9 million of CAR’s 4.9 million estimated population are in need of humanitarian assistance.

Who is still fighting and where?

In June, MINUSCA head of mission Mankeur Ndiaye said that between 50 to 70 peace deal violations were happening each week. Roadblocks are seen throughout the country and some armed groups are still acquiring weapons from neighbouring Sudan and Chad.

Violence has been particularly acute in the northeastern town of Birao, where the killing of an ethnic Kara man in September sparked heavy fighting between the mainly Kara MLCJ and largely Runga FPRC, both of which signed the peace agreement.

The fighting – which has sucked in local residents from both ethnic groups – recently spread to nearby Am Dafock and there are fears it could soon move to Bria and Ndele – two towns where Kara and Runga live in close proximity.

“We have to avoid using each and every incident to have a go at the peace agreement.”

Intercommunal fighting of this kind is not uncommon in the area, however, and does not indicate a complete breakdown in the agreement, said Freddy Nkurikiye, a senior advisor for the Geneva-based Centre for Humanitarian Dialogue.

“There are local dynamics that date from way before the agreement,” Nkurikiye said. “We have to avoid using each and every incident to have a go at the peace agreement.”

In Birao, markets, shops, and houses were ransacked and destroyed during the violence, while heavy rains flooded two camps sheltering displaced people. Aid is currently being flown in because the 1,100-kilometre road from Bangui – which can take up to a month to travel along – is waterlogged.

“Birao is a nightmare from a logistics viewpoint,” said François Batalingaya, head of the UN’s emergency aid coordination body, OCHA, in CAR.

Tensions are also rising in southern Basse-Kotto prefecture – between local anti-Balaka and the UPC, a rebel group that recently took control of the far southeastern town of Bambouti in a major breach of the peace deal.

MINUSCA’s operation in western CAR, meanwhile, is a response to 3R attacks in May that left at least 46 civilians dead, according to Human Rights Watch (HRW).

General Sywo, a spokesperson for 3R, told The New Humanitarian that the MINUSCA operation was “regrettable” but said the group would “continue in the process of peace”.

Which rebels oppose the deal?

The deal got off to a bad start when several rebel groups withdrew representatives from the newly formed government, which they described as “unrepresentative”.

Following emergency talks in Addis Ababa, a compromise was reached in April that involved the government agreeing to increase the number of posts given to armed groups.

But disagreements have continued to simmer.

“They see rebellion as a necessary pain to gain money from the government.”

Two powerful rebel leaders – Mahmat Al-Khatim of the MPC, and Sidiki Abbas of 3R – recently resigned from their positions as advisers to the prime minister citing uncertainty related to their roles in the mixed security units. FDPC leader Abdoulaye Miskine has also refused to take up his position as minister of modernisation of administration, and called for Touadéra to resign or be “removed by all means necessary”.

“We made the commitment… but the government did not respect its part by bombarding [our troops] without freeing our men [who are in prison],” Miskine told TNH. “We don't understand anything.”

The new PRNC group in the north, meanwhile, is composed of former members of the Séléka coalition.

In an interview with TNH, a PRNC official, Azor Zhalit, described the peace deal as a profit-making exercise for rebel leaders who “only want [government] ministries”. “They see rebellion as a necessary pain to gain money from the government,” Zhalit added.

The UN Group of Experts warned that if the PRNC is sidelined from future negotiations it may use violence “to force the government or the international community to engage with it”.

What are the other stumbling blocks?

The mixed rebel-government security units, known as USMS, are designed to encourage armed groups “to protect the populations instead of committing racketeering crimes”, said Francis Che, a spokesperson for the African Union, which brokered the agreement.

The units were expected to be operational two months after the deal, but the refusal of armed groups to accept the first cabinet delayed their implementation, as did disagreements between armed groups and the government over different roles and responsibilities. The first USMS was finally launched on 16 October in Bouar, in northwestern CAR.

“The parties’ divergent understandings of the units’ command structures and the armed groups’ reluctance to commit fighters to longer-term disarmament has hampered their formation,” said a report by the International Crisis Group.

After receiving training from the EU and Russian military advisors, the national army – which was previously under an arms embargo – has now been deployed across more than 20 localities. 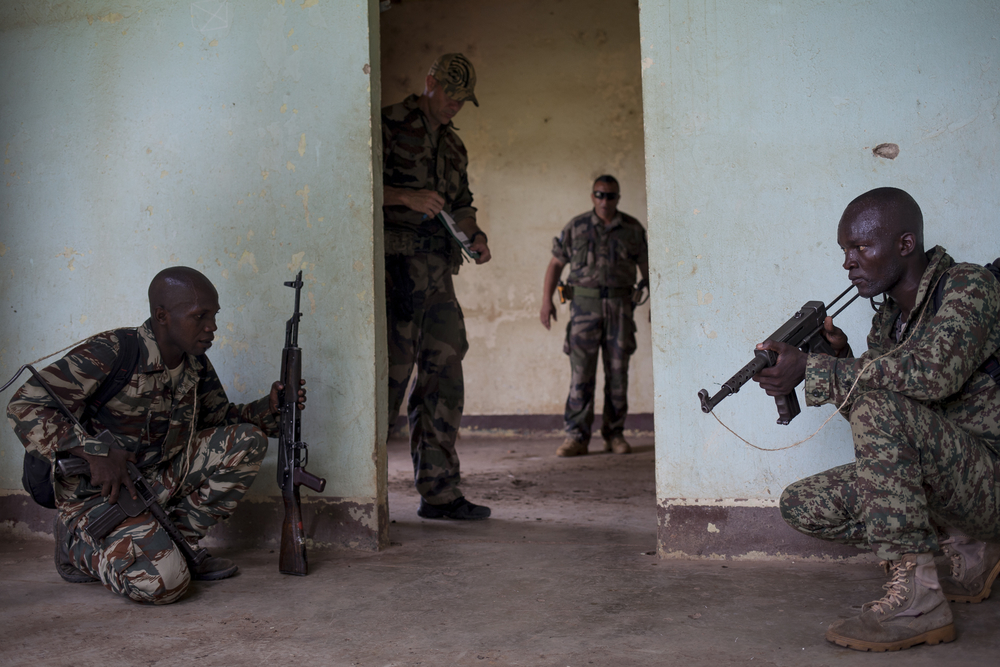 “People in every corner of the country are calling for them to come,” General Henri Wanzet-Linguissara, CAR’s minister of interior and public security, told TNH. “And we are putting the necessary measures in place.”

But some armed groups have been hesitant to accept their return – the FPRC has even threatened to ambush soldiers in the northern town of Kaga Bandoro.

And an army battalion in the UPC-controlled town of Alindao was described as “discreet, almost invisible” by one resident who asked not to be named.

Since December 2018, a total of 583 combatants from seven armed groups have been disarmed and demobilised. But some armed groups have been reluctant to join the process – which is supposed to be completed by January 2020 – and weapons are still finding their way into the country, according to the UN’s experts.

What is the outlook ahead of next year’s elections?

The political climate is becoming “increasingly tense”, according to a recent UN report, as popular opposition to the peace agreement builds ahead of next year’s presidential elections.

“The new government, which has awarded armed groups important national and local posts, has proven controversial with a population that wants above all a reduction in violence and predation,” the International Crisis Group said.

An opposition coalition known as Ë Zîngo Bîanî is protesting against the presence of armed groups in the government, which it has described as “high treason”. Marches and demonstrations have been held in Bangui. CAR’s ministry of interior has labelled the protest participants “terrorists”.

“The peace deal brought nothing,” said Rockson Mayounga, a member of Ë Zîngo Bîanî, during one protest in September. “Power remains in the hands of armed groups in the provinces.”

Souleymane Daouda, a member of the UPC who is now a government minister, conceded that opposition groups are “frustrated” not to receive “the same quota of ministries that the armed groups obtained”, but added: “We are in the process of finding a compromise to get the country out of chaos.”