After three months of extreme violence in Syria’s northwest, marked by hits on hospitals, water facilities, and schools, this week may have seen the deadliest day for civilians since the fragile ceasefire in and around Idlib province began to unravel in April. On Monday, at least 60 people were killed and 100 injured – many of them critically – in a series of airstrikes, including one on a market in the city of Ma’arat al-Nu’man. The UN said the death toll of 39 from that attack, which includes five children, is likely to rise as more bodies are discovered. In total, at least 400 civilians have been confirmed dead since the end of April, and 440,000 have been forced into flight. Some people, the UN reports, have been displaced five or 10 times in Syria’s more than eight-year war and, with camps in the region overcrowded, many are sleeping in the open air. Syria may not be making the headlines like it used to, but there are few signs things won’t get worse before they get better.

Another deadliest day in the Mediterranean

Between 100 and 150 people are missing and feared drowned after a Thursday shipwreck off the coast of Libya, believed to be the deadliest migrant disaster on the Mediterranean Sea this year. Another 150 people were reportedly rescued by fishermen and returned to the country by the Libyan Coast Guard. The UN’s migration agency, IOM, said 84 were taken to Tajoura, the migrant detention centre in Tripoli where at least 53 people were killed by an airstrike earlier this month. The survivors of that attack were allowed to leave but, as we reported, Tajoura is already filling back up again. Before this week’s deaths at sea, Médecins Sans Frontières and SOS Mediterranée announced they were restarting their search-and-rescue mission at the end of July; 14 EU countries agreed “in principle” to a plan to allow refugees to disembark in European ports and be relocated in the continent; and Italy’s government, which did not attend the EU talks, won a confidence vote over new measures to crack down even harder on NGO rescue ships that enter Italian waters.

Boko Haram launched its war against the Nigerian state a decade ago. The conflict has raged across the northeast and into neighbouring Cameroon, Chad, and Niger. It has displaced millions, triggered a famine, deposed a president, and claimed tens of thousands of lives – a level of violence that has made Boko Haram one of the world’s deadliest insurgent movements. The group confirmed its global jihadist credentials when it swore allegiance to so-called Islamic State, but then split in 2016. The breakaway faction, recognised by IS and known as ISWAP, has entrenched itself in the Lake Chad basin region, where it is building a proto-state. Its rival, led by Abubakar Shekau, responsible for the kidnapping of the Chibok girls, is largely confined to territory in the Sambisa Forest and the border with Cameroon, but remains dangerous. For more, check out a short selection of our coverage marking 10 years of war here; our Boko Haram in-depth here; and broader reporting on violent extremism in the Sahel here.

A volatile month for the NGO Swedish Committee for Afghanistan shows the dangers local health workers face in Afghanistan’ s conflict. Early in July, Afghan security forces stormed an SCA-run clinic in Wardak province and allegedly “executed” at least four people, including two health workers. The Taliban swiftly ordered SCA to close 42 health facilities across the province. Then it reversed the decision only days later. What gives? The Taliban has influence in large parts of Wardak, and SCA is one of the few international NGOs trying to boost its presence in both government and insurgent areas. That means balancing demands and distrust from both Taliban and Afghan security forces. After the clinic was first raided, the Taliban accused SCA of not condemning the attack – the Taliban claims ample civilian casualties caused by government and US security forces are often downplayed. SCA did in fact denounce the original attack. And this week, for good measure, it held a press conference and did it again.

The amount of cash used as humanitarian aid continues to grow, according to this fact sheet from Development Initiatives, teasing the NGO’s Global Humanitarian Assistance Report in September. The international aid community is fond of a thematic division of labour (“we do children, you do food”). No-strings-attached cash (let people spend how they choose) is a threat to the relevance of single-issue aid agencies. But what if people aren’t getting enough food, or children aren’t being looked after? A “Grand Bargain” working group on cash has tried to square this circle with new suggestions on monitoring the impact of cash. Another factor is targeting: how do cash transfer systems make sure they catch the most needy? A new evaluation of the largest refugee cash aid project finds that 23 percent of applicants were rejected as ineligible.

India’s Dalits: Ignored even in disasters

Disasters don’t discriminate, but humans do. When Cyclone Fani hit India’s Odisha State in early May, some Dalits – shunned in India’s banned caste system – were refused entry into storm shelters. Instead, the families were “forced to take refuge only under a tarpaulin put over a tree bent by the cyclone”, according to Shivani Rana, emergencies programme officer with Christian Aid. In an article posted this week, the NGO explores the issue of marginalisation in disaster preparedness. Another example: most Dalit and indigenous communities in Kerala didn’t receive any early warning during last year’s floods in Kerala state. Christian Aid says these groups are frequently ignored in humanitarian responses, by both local governments and the international aid system. Addressing this exclusion is tough, especially when the communities aren’t included in decision-making.

EAST AFRICA: More than 15 million people are in need of drought assistance in parts of Ethiopia, Kenya, and Somalia. The lessons are that early action can reduce the severity of disasters, but Oxfam says the international aid effort is just over a third funded. Meanwhile, the Food and Agriculture Organisation is warning of a locust outbreak threatening farmers in parts of Eritrea, Ethiopia, Somalia, Sudan, and Yemen over the next three months.

EBOLA: The World Bank is contributing another $300 million to fight Ebola in the Democratic Republic of Congo – an outbreak that has killed more than 1,750 people. The money adds to the $100 million it allocated after the outbreak was declared last August.

MEKONG DROUGHT: Southeast Asian countries dependent on the Mekong River are reporting intense drought and record-low water levels in the middle of the region’s monsoon season. Researchers say it’s exacerbated by China’s vast network of mega-dams upstream. Thailand is in the middle of a decade-worst drought; water levels in Laos (which is also damming the Mekong) are lower than one metre; and Vietnam is expecting drought through August.

OCCUPIED PALESTINIAN TERRITORIES: Israeli forces began demolishing Palestinian residential buildings in East Jerusalem on 22 July. Rights watchdogs and UN officials said the demolitions were a violation of international humanitarian law and could pave the way for similar moves on land that falls under the civil control of the Palestinian Authority.

SOUTH ASIA: Monsoon flooding in Bangladesh, India, Myanmar, and Nepal have killed more than 600 people this month as the region faces extreme (and continuing) rainfall, according to a UN tally. More than 700,000 have also been displaced, though many have also returned home as waters recede.

For many Iraqis, post-war life remains a struggle

In the more than 16 years since a US-led coalition overthrew Saddam Hussein, Iraq has endured cycles of sectarian and extremist violence. The latest chapter reached a bloody climax two years ago this month when so-called Islamic State were driven from their Mosul stronghold. It was in this northern Iraqi city that IS leader Abu Bakr al-Baghdadi declared a new “caliphate” in mid-2014. In our weekend read, Middle East Editor Annie Slemrod weighs up what progress has been made since the conflict ended. Unfortunately, for large segments of the Iraqi population – including 300,000 people displaced by the violence in and around Mosul and still unable to return to their homes – the answer is not much. Some 1.6 million Iraqis remain displaced overall, and pressure is building on the government to deliver on basic services. This briefing begins a series of TNH reports on Iraq’s post-war problems, from Basra in the south to Erbil in the north. Look out for the first piece next week, on the mental health crisis facing minority Yazidis in Sinjar.

One Day, I Will 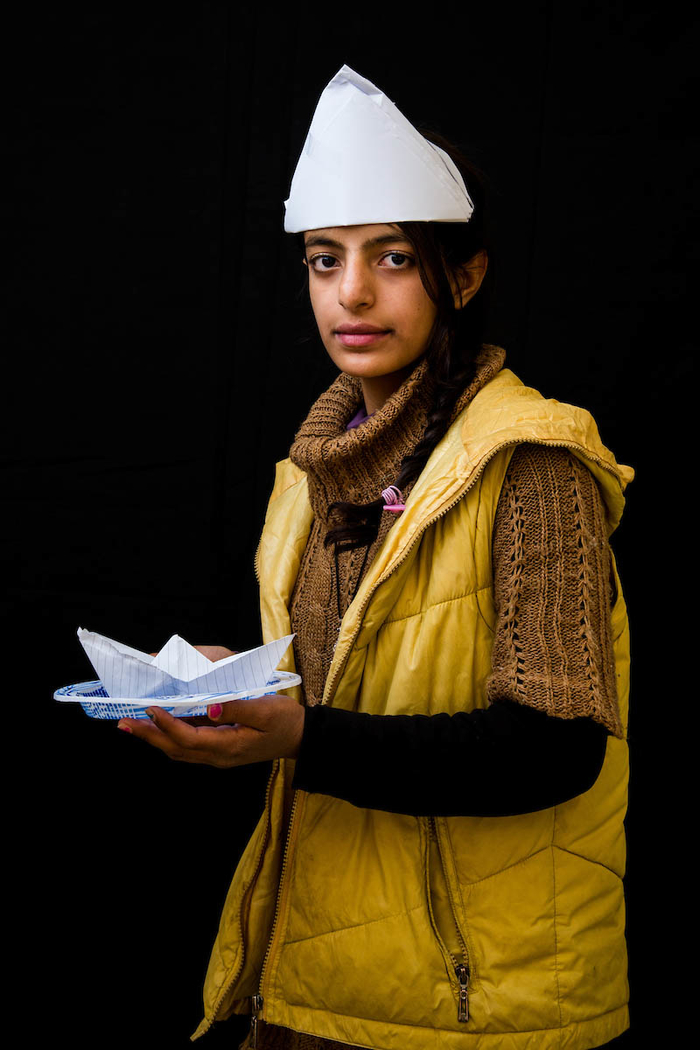 Vincent Tremeau/OCHA
“I’ve never seen the sea, and I don’t know how to swim, but it looks so peaceful in photos. I like to imagine myself sitting on a boat in the middle of nothing, surrounded by blue.”

This upcoming exhibition by award-winning photographer Vincent Tremeau features 30 girls in nine humanitarian crisis countries showing what they want to be when they grow up. The UN’s emergency aid coordination body, OCHA, will launch the exhibition – which aims to highlight how girls are affected by conflict and displacement and why education is so critical – on Monday, 29th July at the UN headquarters in New York as part of World Humanitarian Day. The 2019 campaign honours women humanitarians around the world. Look out for the #womenhumanitarians hashtag.