Tens of thousands of Syrians have fled fighting in the northern city of Hassakeh, with residents describing widespread panic following a sustained assault by so-called Islamic State (IS) militants.

Since last Thursday, IS fighters have been launching attacks on government-held parts of the ethnically mixed city, which is divided into areas run by Syrian President Bashar al-Assad’s government and those under the control of Kurdish People's Protection Unit (YPG) fighters.

The fighting has displaced at least 50,000 people, UNICEF told IRIN on Tuesday.

Hassakeh residents told IRIN of their terror at the sound of approaching IS fighters. “We actually heard them crying takbir,” said Ahmed Siraj Haji Mohamed, a former carwash employee in Hassakeh, referring to the Islamic slogan commonly chanted by IS fighters as they attack.

Speaking to IRIN from outside his father-in-law's house in Amuda – in the de facto autonomous Kurdish zone of Jazeera near the Turkish border, where thousands of the displaced have sought refuge – he lifted his sleeve to show heavy scarring across his upper arm.

“My brother Mohamed was killed in the same explosion,” he said, explaining that the wounds he had suffered from an IS-planted improvised explosive device in Hassakeh a year ago meant he could no longer work and support his wife and young son.

Schools, mosques and private homes across Amuda are housing thousands of people displaced by the latest IS advance.

At Aram Dikram school, Alan Sheikhi, a Kurdish Red Crescent employee, was overseeing services to 150 of the displaced.

“People started coming on Thursday and they keep arriving,” Sheikhi said. His organisation has been able to provide them with basic supplies. UNICEF and the International Rescue Committee are among the other organisations providing immediate support. A dispensary and a nurse offer medical services to the families. 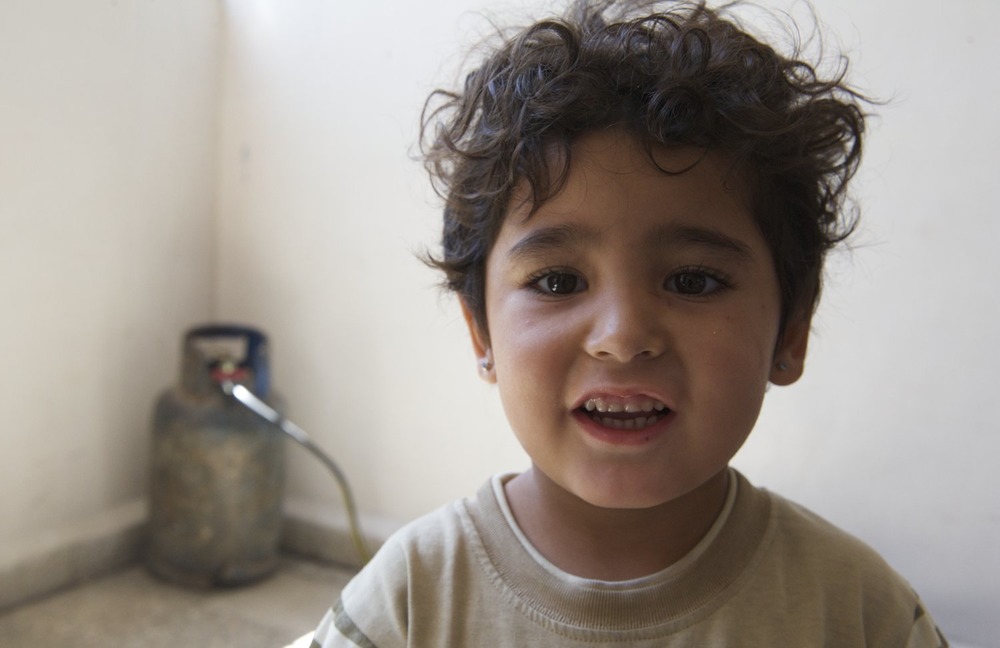 Ismail Ewayed Al Anadi, a manual labourer from Heshmen in north Hassakeh, fled with his wife and four children on Thursday. “We were sitting around while the children were doing the dishes and we started hearing fighting – mortars, shells, clashes,” he said, speaking by the light of a cell phone in the corridor of the school. “We decided to flee before something happened to us.”

Anadi said it was hard to get an accurate picture of the current situation inside Hassakeh, which lies around 70 kilometres south, particularly given the unreliable cell phone coverage. “We hear something different every time. Sometimes we hear that it's completely fine and then we hear that there are still heavy clashes. We don't know what's going on.”

UNICEF spokesperson Juliette Touma told IRIN that both the national hospital and the children’s hospital in Hassakeh are currently closed after being attacked in the clashes.

Syrian state news agency SANA reported on Monday that government air strikes had killed large numbers of IS fighters in Hassakeh. As the contested areas are largely under the control of the Assad regime, the United States has ruled out any airstrikes to repel the Islamists.

At the al-Tikiya al-Qadariya mosque in Amuda, Imam Sheikh Ahmed has been supplying food, water and shelter to 100 people. “We're trying as hard as we can to provide for these people but we have very limited resources. I've asked for help from NGOs, but so far have heard nothing back. There are a lot of organisations but there is very little actually being done. These people don't have anyone and if I didn't help they would be in the street.”

Mohamed Hussein fled to the mosque with his wife and four children from the Gawera neighbourhood of Hassakeh. They took nothing with them. “We knew that IS entered the city and with all the talk of destruction and killing we just fled,” he told IRIN.

Hussein, who was anxious to return to Hassakeh as soon as possible to check on his home and belongings, felt the militants could be driven out if the Kurdish fighters and Assad’s men joined forces.

“I do believe that they can clear IS from the city, if the army and the YPG can agree to coordinate,” he said.

UNICEF’s Touma said they were providing critical water and hygiene supplies to the displaced, while they are still working with local organisations to provide primary health care inside Hassakeh and were preparing for worsening conditions.

Some 11.6 million Syrians have fled their homes since the start of the Syrian conflict, now in its fifth year. A further 200,000 Syrians are estimated to have been killed.

* The original version of this article incorrectly said hospitals in Qamishli were closed, rather than Hassakeh.