The crisis in Libya began in mid-February and has since led to deaths, injuries and the displacement of thousands. Nearly half a million people, including many third-country nationals who were working in Libya, have left the country. Some are still stranded at border points. Here is a timeline of some key events since February:

15 February - Riots in Benghazi triggered by the arrest of a human rights activist. The riots soon turn into a fight against government forces, with protesters demanding Col Muammar Gaddafi, who has ruled Libya for 41 years, step down.

27 February - UN Security Council passes Resolution 1970, imposing sanctions on Gaddafi and his family and refers the situation in Libya to the International Criminal Court. Next day, EU governments approve a package of sanctions against Gaddafi and his closest advisers, including an arms embargo and travel bans.

1 March - UN General Assembly suspends Libya's membership of the Human Rights Council. Aid agencies report that at least 147,000 people have fled across Libya's borders. More are on the move.

5 March - The Libyan National Council meets in Benghazi and declares itself sole representative of Libya. Gaddafi's forces continue to fight in other areas.

9 March - Over 100 physicians with medical supplies deployed in eastern Libya by the Arab Medical Union. Access to western Libya remains a problem.

10 March - Forces loyal to Gaddafi bomb the oil town of Brega and take back control of Zawiyah, about 50km west of Tripoli. France recognizes the opposition Libyan National Council (the opposition to Gaddafi) as the legitimate representative of Libya's people.

12 March - The Arab League calls for a UN no-fly zone over Libya to deter the bombardment of civilian targets by government forces.

15 March - Tunisia's Ministry of Public Health, supported by WHO, UNICEF and other health partners, start a vaccination campaign for an estimated 100 under-five children currently residing in Choucha transit camp on the Tunisia-Libya border.

17 March - The UN Security Council votes on Resolution 1973, which authorizes a no-fly zone over Libya and "all necessary measures" to protect civilians against government forces.

18 March - Reports of a critical shortage of medical personnel in Benghazi particularly as majority were migrant workers who have now left Libya. Next day, coalition air strikes on Libyan government forces start.

20 March - Libya declares a ceasefire, but fighting continues amid rising concerns for the safety of civilians in conflict areas. Next day, Gaddafi tells supporters he will not surrender and asks them to form a human shield to protect him at his Tripoli compound.

Migrant workers/refugees are sleeping by the roadside at Salloum 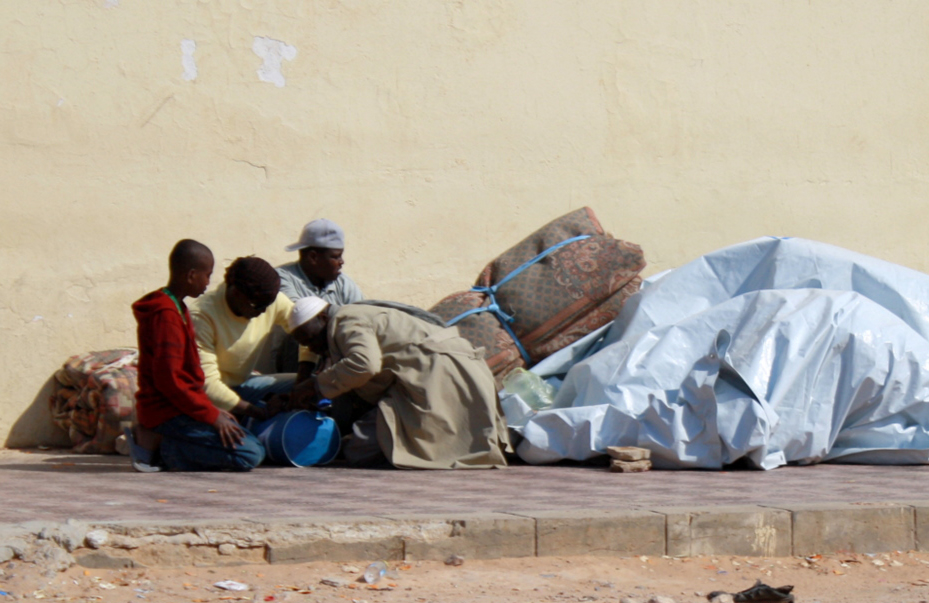 25 March - Report from eastern Libya of increased internal displacement including estimates that up to 25,000 people have been displaced.

31 March - Handicap International sends a team to Libya in response to concerns over risks to populations from the use of landmines and unexploded ordnance in recent fighting.

3 April - Warplanes fly over Brega as anti-government forces fight government troops for control of Brega. Government forces attack the towns of Zintan and Yafran. Some 213 people reported drowned in the sea after leaving Libya for Italy.

5 April - Turkish medical aid ship arrives in Turkey with injured Libyans from Misrata where fighting continues. Up to 13,600 people remain stranded at camps and transit points on the border with Libya.

6 April - WFP moves more than 1,500 tons of food into eastern Libya, enough to feed more than 100,000 people for a month. ICRC warns that the abundance of weaponry represents a major hazard for the country's civilian population.