This article is part of our in-depth coverage. Read more like this...
LAGOS

If the goal of urban development is to improve the cities we inhabit, then we must first address the needs of the majority of us who live on the margins.

Continuing to hope that illegally demolishing informal settlements will somehow eradicate them is at best a delusion, since the only thing continuous forced evictions guarantee is that we will have slums in our cities forever.

A month later, around midnight on 9 November, state security officers oversaw the first of what turned out to be a series of demolitions in Otodo-Gbame, a fishing village on the edge of a newish, upscale neighbourhood.

By April 2017, the entire area – once home to 30,000-plus indigenous Lagosians – had been forcefully emptied of people and property.

A few short months later, as the land was prepared for construction, a prominent land-holding royal family was named on a signboard as the joint venture title-holder.

“If you no get money, hide your face” is the opening line to one of the biggest Nigerian pop hits of 2017. It underscores the widely held idea that allows this kind of state-backed land grabbing to be openly conducted.

Lagosians are generally fairly comfortable with violence, including violence directed at poor people and bolstered by the manic kleptocracy that has enshrined “Money as God” in our culture.

Poverty is criminal, and this global maxim takes on a distinctly Nigerian flavour in the face of the impunity of our political class.

To be not-rich, not-influential, not-connected to the “right” people is considered a moral failing, generally understood to be a shameful indictment on those unfortunate enough to be thusly described. 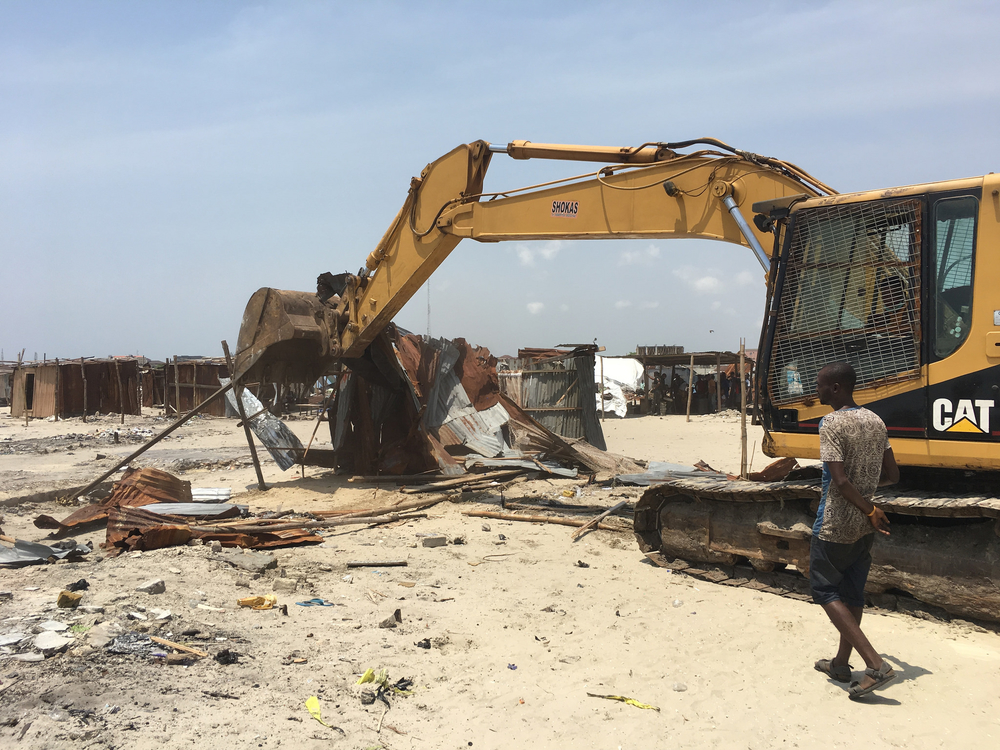 The uptick in forced evictions in Lagos over the past five or so years has seen state and private actors repeatedly exploiting our deeply entrenched classism to worsen the city’s already marked inequalities.

Lagos State is the smallest entity of the Nigerian Federation by land size; a small string of lagoonal islands connected by bridges to an increasingly packed mainland.

But by population density, nothing in West Africa compares with the anthill-like living conditions here.

The poorest parts are the indigenous settlements or enclaves that have organically sprung up around industries.

These areas often have no connection at all to what little infrastructure there is in the city. They are also usually the places where the thousands of people who daily migrate into the city via means other than our international airport are most likely to attempt to find shelter.

Largely unplanned and spreading senselessly out from its major roads, modern Lagos has evolved at the whim of its various mostly short-sighted and self-interested leaders, with the provision of housing rarely being a priority.

The combination of murky regulations around land ownership, economic opportunity, scarce land, and abundant looted funds has proved disastrous for the land and housing markets in the city, and in particular for the people with the least economic power.

Lagos State has one of the most expensive housing markets of any city in Africa, and, as the rich increasingly use property as a store of value, poor people – especially those who live around wealthy neighbourhoods – are at greater risk of losing their homes.

The distribution of wealth (see also: political power) in Lagos is skewed to the point of obscenity in favour of a minute elite, a significant chunk of which is constituted by land-holding families.

Despite being such a small city with a long urban history, and despite 30-40 percent of existing properties remaining unoccupied for extended periods, new building projects dot the landscape.

So one wonders: why we are building so much? And, more to the point, where is all the land we’re building on coming from?

A lot of the time the answers are simple: profit for the former, and land grabs for the latter.

Land grabs have a long history in Lagos, going at least as far back as when it was first cornered as a settler colony.

In more recent times, the avatar of forced eviction in this city is the now-unarguably upscale area of Lekki/Victoria Island extension, which rose from the charred ruins in 1990 of the sprawling and self-sustaining village-cum-informal settlement called Maroko.

Hundreds of thousands of people lived there undisturbed until the American oil and gas multinational, Mobil, set up headquarters on its far borders, immediately driving up the market value of the land.

Not long after, state security personnel arrived to dislocate the people in order to clear the way for “development”, in the form of billions of dollars of new property.

No security of tenure

Unfortunately for people like those who lived in Maroko, land laws in Lagos are not pro-poor. The process of securing land title is tedious and expensive, especially for the urban poor for whom the aphorism "time is money” takes on an almost literal meaning.

Besides being generally time-starved due to their reliance on daily income to survive, poor people rarely have the other resources necessary to navigate the Registry of Lands.

Without adequate information about the nature and cost of the processes, petty cash to hand out to civil servants to incentivise them to do their jobs, or a prior relationship with some “Big Person” or other within the system to help move things along, the process of acquiring land title is prohibitive.

To make matters worse, the few protections available to people living in informal settlements, such as those offered by customary occupancy and tenancy laws, are flimsy.

Once influential land-holding families or other powerful actors set their sights on land occupied by the urban poor, illegal removals become almost inevitable.

As forced evictions continue to be used as a tool of dispossession, the state’s unwillingness to grant security of tenure to people living in informal settlements can only be interpreted as deliberate complicity in their eventual displacement.

Trapped by the system

While it is often argued that the urban poor deserve to have the slums they live in destroyed for safety reasons, evidence indicates that part of why slums remain so unsafe is the threat of eviction.

The unpredictable but ever-looming possibility of being violently removed is a concrete disincentive to the urban poor to upgrade the quality and standard of the homes they live in, even when they have both the desire and the surplus resources so to do.

Not having documentation proving ownership or strong legal protections that underscore their right to remain on their land makes slum residents less likely to invest in their communities or approach the state to request infrastructure.

Often, the urban poor would rather not risk the visibility that comes with state agencies profiling their communities for schools, roads, sanitation, and other services if they are afraid it will lead to state-led or privately sponsored evictions.

Furthermore, with the provision of services like piped water and electricity, slum areas become more appealing to people with greater economic power than slum dwellers, leading to the slow suffocation of the community via gentrification.

Without security of tenure, the urban poor are stuck in a vicious cycle. Their neighbourhoods are defined by an absence of basic services that can then be used to justify forceful removal. And yet, the provision of basic services might simply be the first step in the direction of eventually being priced out of their own neighbourhoods.

Violently displacing people does not solve any of the housing problems created by inequalities in income, land distribution, or access to services; it just deepens them.

If our goal is to improve the city we actually have, then it is crucial to engage with the needs and realities of the 60 percent of our population that is poor.