It’s so cramped in South Africa’s Imizamo Yethu township that your opposite neighbour’s front door is closer than the government’s recommended coronavirus social distancing guidelines of one and a half metres.

Yet the government’s stay-at-home order to contain the spread of COVID-19 is confining people in townships like Imizamo Yethu – perched on mountain slopes above the Western Cape harbour town of Hout Bay – where only the barest of services are available.

Take Nompiliso Gcaza. Her home is a single tin room she shares with her husband, two children aged 12 and 17, and a two-year-old grandchild.

“I have to go outside for water, and I am using the same toilets as my neighbours,” she told The New Humanitarian. “We are not sure if we are safe [from COVID-19] here.”

South Africa’s lockdown, introduced on 27 March, has closed all shops and businesses, with only a few exceptions, including supermarkets, pharmacies, and petrol stations. It’s a cost disproportionately shouldered by South Africa’s township poor.

Gcaza is a community liaison officer for a private construction company, but her employer has not paid her $83 weekly wage for the past two weeks. “Now we are at home with no food,” she told TNH.

Many of Imizamo Yethu’s (meaning “Our Efforts” in Xhosa) estimated 20,000 to 30,000 residents work in the low-income tourism service industry as restaurant and hotel staff, or as domestic workers and gardeners in Hout Bay’s sprawling private homes and estates in the valley below. 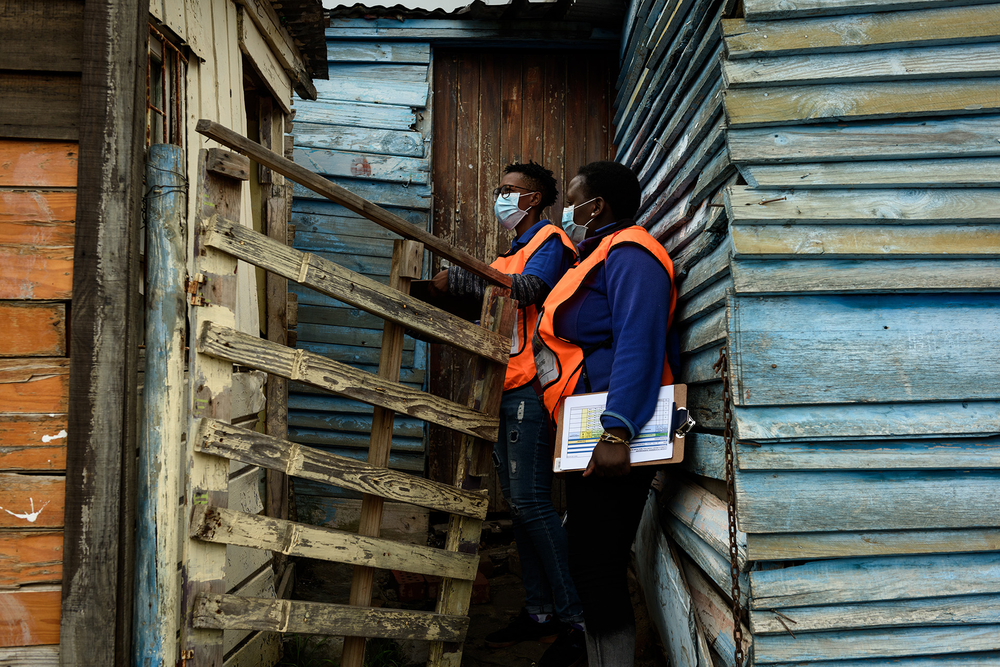 Nelson Lulane, 44, is a security guard in a Hout Bay gated residential estate, at the foot of a winding maze of hillside paths. He earns the $1.10-an-hour minimum wage, but is grateful he still has a job to go to.

Lulane’s neighbour, a gardener, is now unemployed. “When I am at work, I don’t know if he is following the instructions from the government [to stay at home],” said Lulane. “He had to stop working and he says he didn’t get paid. I don’t know where he goes to find something to eat, or maybe he is safe. I don’t know.”

Based on a 2011 census, there are roughly 61 households for each toilet and nearly 400 households share a tap in Imizamo Yethu, a township that dates back to the 1990s and the apartheid-era.

“I did an illegal [water] connection,” said Lulane, a community leader, pointing to the indoor gravity-fed tap in the shack he shares with his daughter and wife. “I decided some weeks ago when there was talk about a lockdown. I have to keep my daughter here watching cartoons, as I was worried about her safety fetching water.”

South Africa currently has 3,635 confirmed coronavirus cases with 65 deaths – the largest and deadliest outbreak in sub-Saharan Africa. It is ramping up testing and screening as 28,000 health workers go door to door countrywide. So far, 125,000 people have been tested.

President Cyril Ramaphosa this month extended the initial three-week lockdown by a fortnight to 1 May, as “we are only at the beginning of a monumental struggle”, he told the nation.

On Wednesday, he announced a $26 billion package to support the flagging economy, including $2 billion in welfare grants for the poor and unemployed – and put an extra 73,000 troops on standby to help the police enforce the stay-at-home amid growing cases of looting.

The retail bank ABSA recently forecast that South Africa’s GDP will contract in the second quarter of the year by 23.5 percent.

Even before the lockdown, the economy had entered a technical recession, with two successive quarters of economic decline. Official unemployment was nudging 30 percent, a jobless rate mirrored in Imizamo Yethu.

“It’s very bad,” was the assessment of Sibusiso Dladla, 30, a taxi driver-owner idling with associates at the rank. Lockdown regulations curtail operations to between 5am and 10am and 5pm through to 8pm – passenger numbers are also restricted.

Dladla is a single parent, supporting his six- and eight-year-old sons and mother.

“I can say it’s better for people to be safe, but it’s not better for us to be hungry,” he said. “You can’t go hungry because you want to be safe. There is always a risk.”

Some of the few people making money in Imizamo Yethu are the bootleggers. The lockdown’s ban on the sale of alcohol is fuelling demand for a traditional maize-based beer known as Umqombothi. A standard quart (750ml) now sells for nearly five times the pre-lockdown price.

“I can say it’s better for people to be safe, but it’s not better for us to be hungry.”

The informal drinking places in the townships are known as shebeens. One shebeen owner, who declined to give her name, has brewed and sold Umqombothi since she arrived from the Eastern Cape town of Mthatha 25 years ago. A 150-litre drum would usually last three to four days – now it’s gone in a day, she told TNH.

Her profit on each barrel is about $55, but it has its risks. “This will be the last barrel [I brew],” she said. “I’m scared of the police arresting me – then the money is lost.”

The private sector has responded to the coronavirus challenge with a Solidarity Fund, which aims to cushion the financial blow for low-income earners and small businesses. By 22 April, the fund had secured $136 million in donations from individuals and companies.

Ramaphosa said this week the government would now partner with the fund to distribute 250,000 food parcels in the next few weeks.

Even before the announcement, community leader Betty Magxaka had been compiling a list of 25 vulnerable pensioners in her township block of about 200 people – although she has no specific government contact to coordinate with.

“We are not sure if [food assistance will be] once off, or maybe every week. We don’t know,” she told TNH.

Imizamo Yethu has a well-worn track record of service delivery protests against local government failures. In other townships that has often served as a precursor to xenophobic violence against African foreign nationals – many of whom run the small so-called “spaza” shops that serve the community. 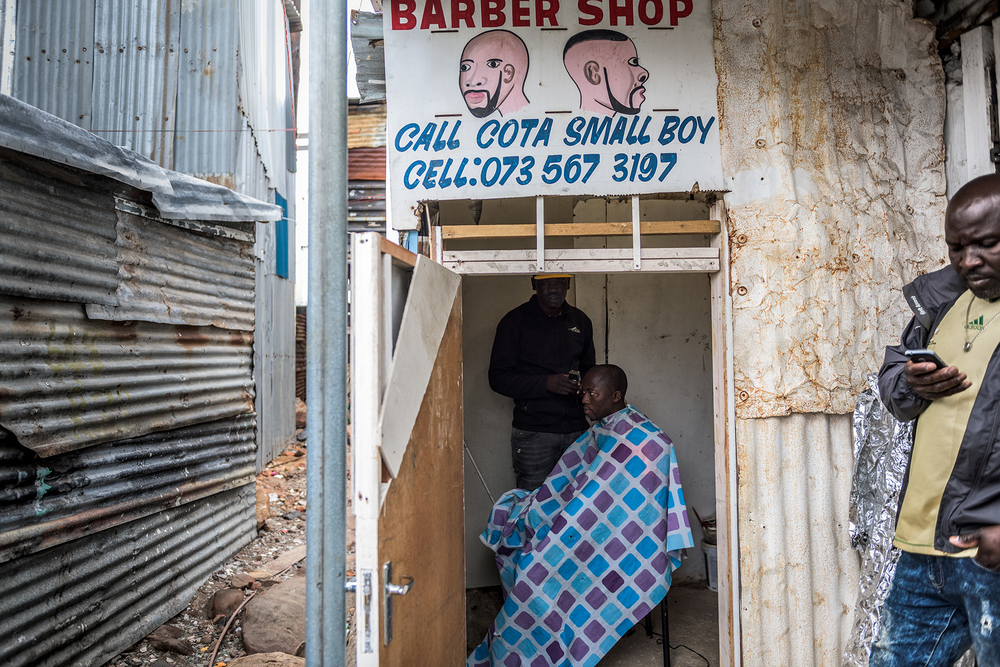 Guy Oliver/TNH
Imizamo Yethu’s micro-businesses continue to operate during the lockdown. An estimated 20,000 to 30,000 people are squeezed onto 0.57 square kilometres of land – and few wear protective masks.

But that anti-foreigner sentiment is absent in Imizamo Yethu, although the same drivers of poverty and high unemployment are at play.

Magxaka, for one, wouldn’t stand for it. “Most [people] working in restaurants [in Hout Bay] are Zimbabwean, and they are not working, and we have to look after those people as well,” she said.

Munyaradzi Madzitire, 44, was originally from Zimbabwe’s Mozambique border town of Mutare. “There is no xenophobia here,” he told TNH. “I have been staying here 20 years. They know me. Why would they attack me? I have kids with a Xhosa lady.”

But his decade-old beauty salon is struggling, and his staff are largely idle. His personal daily income, previously between $32 and $54, has evaporated. “Now I make one wash for [$1.60] in a day.”

April’s $81 rent for the business premises is settled, but he is short $54 for the $163 monthly rent on the home where he lives with his wife and three daughters, aged 13, nine, and four years old.

Eda Soku, 24, is self-isolating with her older sister Esther. She migrated to South Africa from Malawi in November 2019 to join Esther and was a barista at a restaurant in Cape Town – 20 kilometres away.

The two sisters normally remit between $137 and $190 a month to support their mother, their 13-year-old younger sister, and Eda’s two-year-old daughter in Mzuzu, a city in northern Malawi, and share the $82 rent for a single room. They skipped the March remittance.

“We have food for another two weeks, but other people don’t,” said Esther. “It’s that uncertainty I don’t like.”

Esther is also worried about the virus itself. “What if it comes here? It’s overpopulated, and a small area,” she said. “If one person has it, it’s going to be a big problem.”