This article is part of our in-depth coverage. Read more like this...
Part of an in-depth series exploring the consequences for the urban poor as the rapid growth of African cities outpaces policy reform
NAIROBI

Africa is urbanising at an incredible rate, but its cities are not delivering the opportunities and better lives such dynamism deserves. Instead, slums are expanding, trapping their inhabitants in poverty and neglect.

It doesn’t have to be this way. African cities can reform if the right policies and institutions are in place and supported.

Over the next 20 years the total number of city dwellers across Africa will increase from around 400 million to more than 1.26 billion, according to UN Habitat. Lagos, for example, has surged from five million inhabitants in 1980 to around 20 million today – making it already one of the world’s 10 mega-cities.

People move to urban centres because that’s where the income-earning opportunities are. That concentrated energy and potential should be what African cities need to catapult up the developmental ladder.

Instead, the reality is urbanisation without economic growth, which translates into infrastructural decay and deprivation: more slums, and less security, happiness, and wellbeing.

Take Mukuru, across a busy highway in Nairobi’s industrial area. More than 100,000 families are packed onto the privately owned land: a concentration of 10x10-foot rented shacks without water or toilet facilities, and a constant fear of eviction.

Sanitation is a horrendous problem. The unpaved rutted roads become cloying, waterlogged traps when it rains, and the heavily polluted river is prone to flooding.

Mukuru is right next to the city’s factories, automechanics, and spare parts dealerships, but there’s little employment here.

Community activist and filmmaker Julius Wainana estimates that out of every 10 friends, just two or three – those lucky enough to have made the right connections – have jobs. 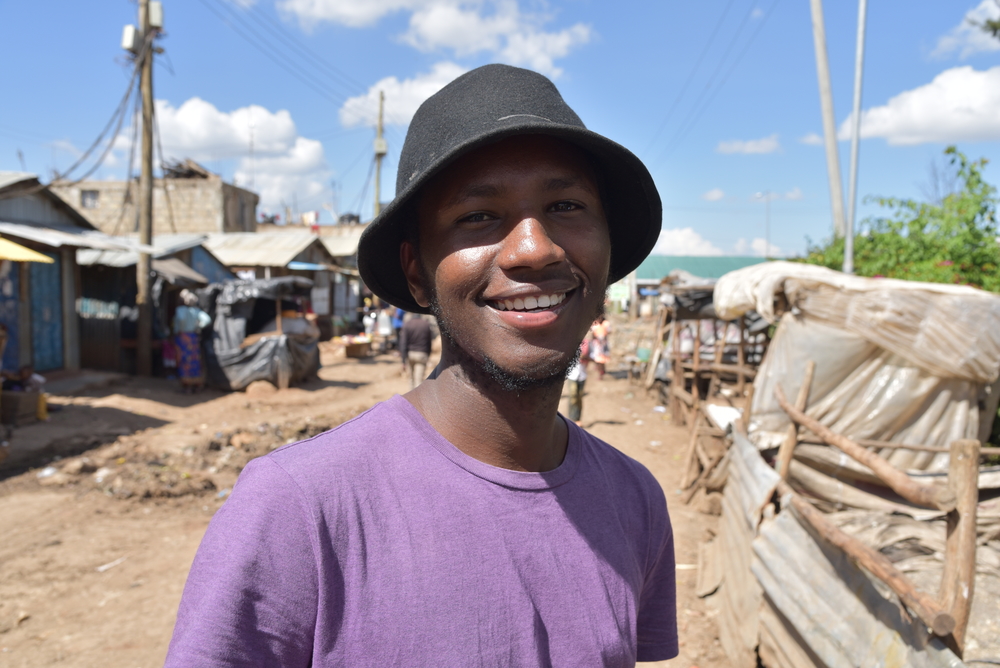 “The others live with their mums, or wait for something to come up that lasts them a day or two [each month],” he told IRIN. Crime, alcohol, and drug abuse are inevitable problems, reinforcing the negative perceptions of the area.

They are crowded “but not economically dense”. That means low investment in infrastructure, business, and affordable housing. It’s an urbanisation of people, not capital.

Asian cities have ploughed double the rate of investment into roads, sewerage, policing, and healthcare than African countries have achieved over the past four decades.

New development expands the margins of the cities, but poor roads makes commuting a test of resolve, reducing workers’ access to job opportunities.

African cities are also costly, both for residents and businesses. Lall argues this is a consequence of being inward-looking rather than export-orientated. 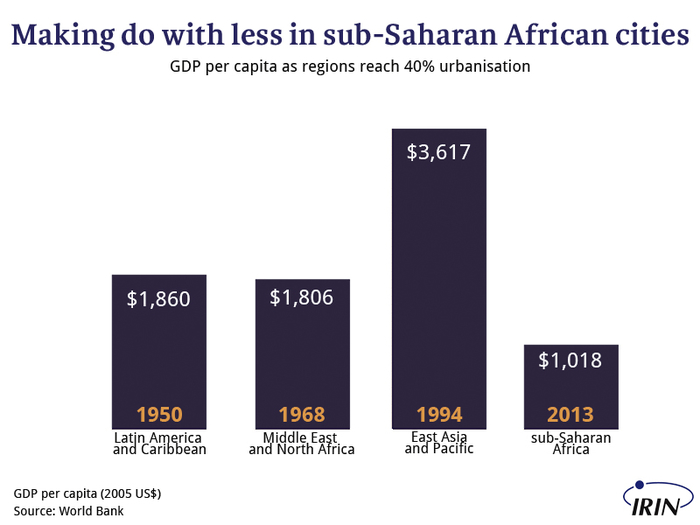 Low growth means urban-dwellers pay a third more for food than other low- and middle-income regions of the world, and through the nose for most other goods and services as well.

The degree to which private business has to be self-sufficient “in terms of providing the power, transport, and security services that local and national authorities should, is often not fully understood,” a Zimbabwean research team points out. This drives up their costs and reduces profitability.

The size of the informal economy far outstrips the formal sector, allowing people to scrape a living. Places like Mukuru are bustling with trade and artisanal services. But although the informal economy employs on average 60 percent of the urban workforce, it accounts for less than one quarter of economic growth, according to the Zimbabwean researchers.

The informal economy is a survival strategy. It disguises unemployment, essentially acting as a safety net. It typically doesn’t generate the public revenue required to address the needs of cities, and as a result the authorities tend to either ignore it, or periodically crackdown on its activities.

African cities are difficult to administer. They are dependent on government subsidies and often seemingly unwilling to change, typically ringfenced by archaic laws and vested interests.

They are also among the most vulnerable in the world to disasters and the risks compounded by climate change.

Informal settlements are usually in the most hazardous parts of the city such as steep hillslopes or floodplains, and these residents “are less likely to be served by risk-reducing infrastructure”, notes a briefing by Urban Africa: Risk Knowledge.

Rural-urban migration is not just to capital cities. Almost half of Africa’s urban population – and a fifth of the total population – live in “small” urban centres or secondary cities.

Here the provision of public services like water and sanitation is usually worse, and the municipal authorities even weaker, magnifying disaster risks.

But despite the discouraging scale of the problems faced, there are many examples of cities trying to come to grips with their challenges.

For decades Lagos was a byword for dysfunction and crime. But in 1999 it began a process of reform that dramatically widened the tax base and triggered a surge of Dubai-style development described as some of the most promising and forward-looking urban planning in Africa.

But the Lagos experience is not easily replicable. Firstly, the city has entrenched wealth. Secondly, it was an opposition stronghold with a history of progressive politics.

The response of the state’s political leadership to ruling party threats was to solidify its grip by making good on promises to its well-educated and informed voters.

Tax revenues were needed to implement those reforms, with a willingness by Lagosians to pay predicated on evidence of service delivery – creating a virtuous circle.

According to analyst Nic Cheeseman, there were specific conditions needed for the state leadership to pursue its “mega-city ambitions”.  These included political stability that allowed them to plan for the long term, and the appreciation that the reforms were a “feasible way to protect their interests”.

The result, however, is a city of even starker contrasts. Lagos is home to some 10,000 dollar-millionaires, while around two thirds of its citizens live in slums. The beachfront developments for the super-rich have been at the expense of the ultra-poor, their communities bulldozed, their rights ignored.

Nairobi city council is trying a different approach in Mukuru. In August it declared the 647 acres of land divided among 230 different owners a Special Planning Area, providing a legal basis for the council to act. 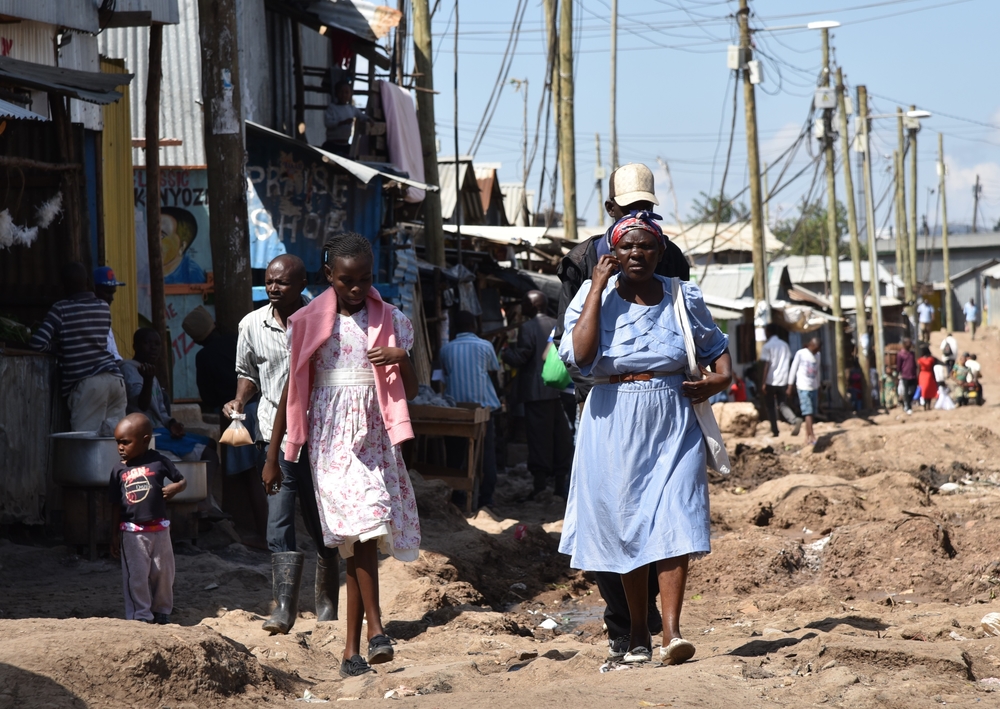 A Mukuru Integrated Development Plan is being prepared over the next two years. Based on the input of the community, the hope is that it will be “comprehensive and ambitious”, suggests the UK-based International Institute for Environment and Development.

Nicera Kimani heads the Young Women’s Initiative, a movement to empower women in informal settlements across the city. Kimani is working with the community in Mukuru to make sure their views are canvassed and heard. She’s concerned there could be pushback from the landowners and distrusts the politicians who traditionally use the poor as vote banks but told IRIN: “There is light at the end of the tunnel”.

It’s a view shared by Wainana, the filmmaker activist, who nodded. “The community has to be involved, and it will take a few years, but I can see a better future.”