Funding shortages are hindering the humanitarian response to a severe drought in southeastern Ethiopia as international donors and the federal government focus their resources on the 16-month conflict affecting Tigray and other northern regions.

There have been significant delays in launching crucial animal vaccination and fodder distributions for vulnerable livestock in drought-affected areas, aid officials told The New Humanitarian, while efforts to boost access to drinking water have also been held up.

More than 6.8 million people are now in need of humanitarian assistance across four lowland regions. Around 1.5 million animals have also died, threatening livelihoods in an area where people rely mainly on livestock for income and survival. 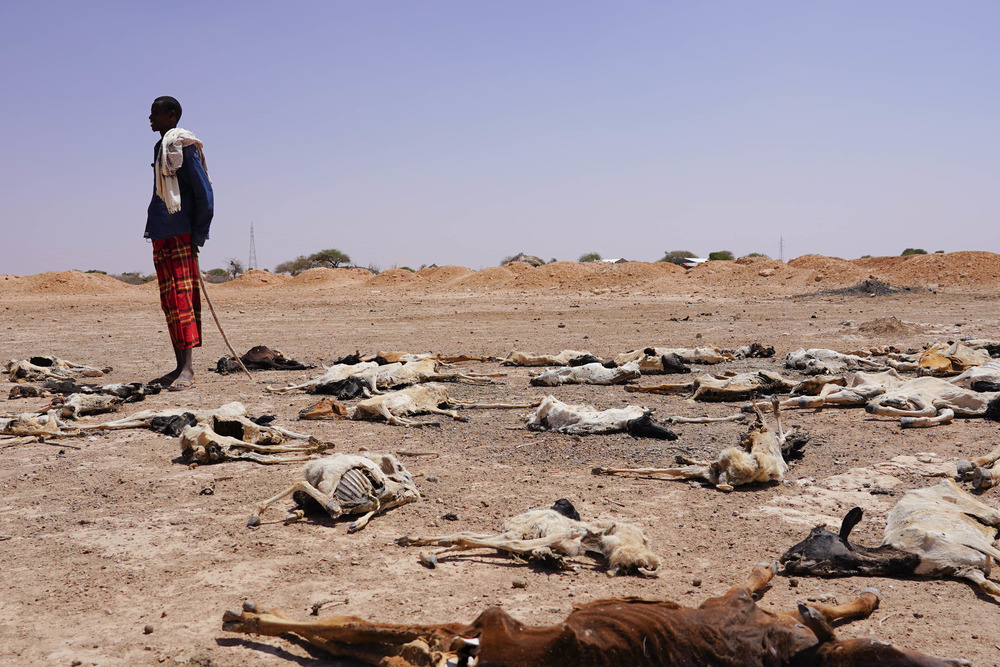 Maria Gerth-Niculescu/TNH
A herder in Ethiopia’s drought-affected Somali region stands amid dead livestock. A multi-season drought has caused the death of around 1.5 million animals across the country.

The multi-season drought – which could worsen if the coming rains are below average – is also affecting other Horn of Africa countries, with some areas experiencing the driest conditions recorded since 1981. The situation is most critical in Somalia.

Still, aid agencies say donor funds are far short of what was provided during the last major regional drought in 2016-2017. And there are fears that efforts to obtain funding and attention from donors may now be complicated by the conflict in Ukraine.

Several international aid workers said they sounded the alarm over drought conditions in Ethiopia late last year when it was clear another rainy season was about to fail – the third consecutive failure in some areas.

But the aid workers said funds proved hard to mobilise, with donors concentrating on the humanitarian disaster in northern Ethiopia, where rebels from the Tigray region have been fighting against the Addis Ababa government and its allies since November 2020.

Though the federal government has contributed significant amounts to previous drought responses, it is also “caught up in the situation in the north”, said Mustafa Mohammed Omar, president of the Somali region – one of the worst-affected parts of Ethiopia.

On a visit to Somali last month, The New Humanitarian saw roads dotted with decaying animal carcasses, and spoke with pastoralists who said they were cutting back to single meals per day or giving disease-prone animals food intended for their families.

Aid groups say nearly 600,000 children and mothers are malnourished in the region, while severe acute malnutrition among children has risen by 20 percent across all drought-affected regions, according to UNICEF.

Predictions for the March-May rainy season are uncertain, though relief groups say a worst-case scenario – failed rains and limited humanitarian assistance – could plunge people into catastrophic hunger levels in Ethiopia and neighbouring countries.

Food security experts say intervening early is essential in a drought situation. Slaughter programmes can help pastoralists cash in on their animals, for example, while vaccination and parasite control campaigns can protect livestock health.

But efforts to raise funds late last year for these types of intervention came as the conflict in northern Ethiopia peaked: Tigrayan forces had advanced to within 200 kilometres of Addis Ababa, the capital city, displacing millions of people in their wake.

“Most donors are focusing on other emergencies that are now prevailing in Ethiopia – the conflict, the reconstruction,” UNICEF’s Ethiopia representative, Gianfranco Rotigliano, told The New Humanitarian as he visited a hospital in the Somali town of Gode in February.

“Animals are dying... it is less sensitive than children being malnourished [in the north],” added Seid. “We keep trying to show [donors] that with pasture depletion... two or three months later you will see acute malnutrition rates going up [in the southeast].” 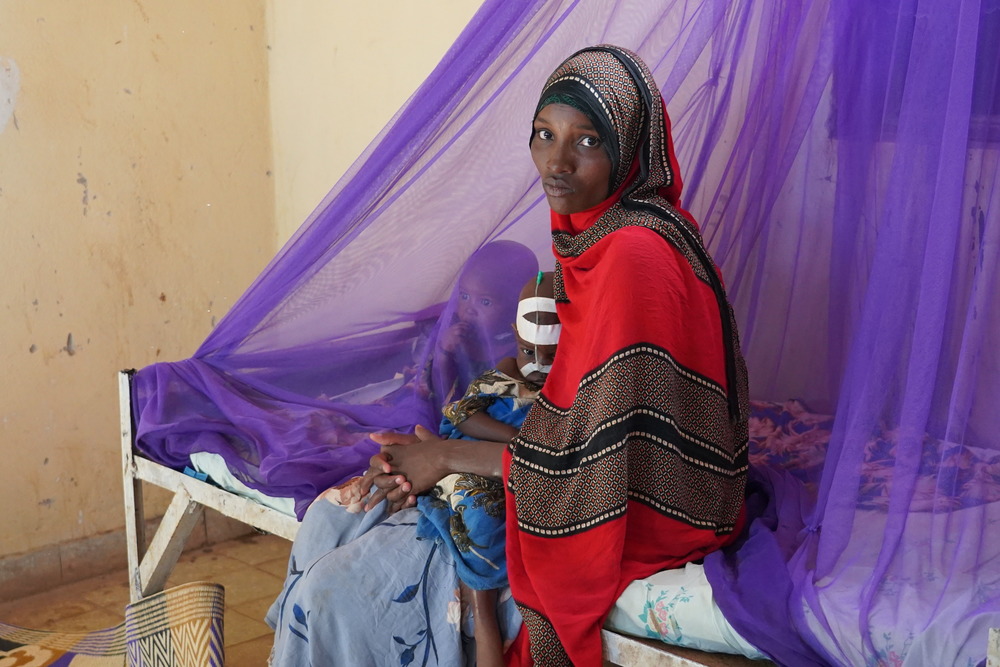 Maria Gerth-Niculescu/TNH
A woman and her children sit on a bed at a hospital in Ethiopia's Somali region. Rates of severe acute malnutrition among children have risen sharply in drought-affected regions.

Tigrayan forces have now retreated back to their region, but drought funding remains limited. The FAO has received pledges for $12 million out of $32 million requested, while the World Food Programme has a funding gap for the next six months of $175 million.

The federal government – which contributed more than $700 million to the 2016-2017 drought response – has, meanwhile, taken the backseat given its involvement in a war in the north that has severely damaged the Ethiopian economy.

Omar, the Somali president, told The New Humanitarian that regional governments – not wanting to “risk waiting for something” – have picked up the slack. He said around $29 million has been spent in Somali and that malnutrition is lower than in past droughts.

Still, opposition parties in Somali have accused the regional administration of failing to respond swiftly to the crisis, while several pastoralists told The New Humanitarian they felt state support was insufficient.

“This drought is worse than all previous ones,” said Mahmoud Hussein, a 22-year-old herder from Somali’s Berano district. “During previous droughts, the government was providing food for us, but now [we have received] nothing.”

Aid groups are now planning to scale up vaccinations for livestock – as well as other key response activities – but they will have to pick the right moment as animal immune systems have degraded to the point where jabs could be dangerous.

The weakened condition of livestock has caused their market value to plummet, while surviving animals are producing little or no milk – the main source of nutrition for children.

“All we can give to our children is a bit of tea without milk – but the milk is what used to make them [healthy],” said Mahamoud Abdoulaye, a 40-year old herder from Berano district who said his family is now surviving on boiled rice.

Abdoulaye spoke to The New Humanitarian while drinking from the only water-bearing well within a 10-kilometre radius. He said he walks two hours each day to fill up containers, and that water trucking hasn’t been set up in his area.

The search for clean water and pastures has forced thousands of Somali men to leave their villages and migrate their cattle elsewhere. Women and children usually stay behind. 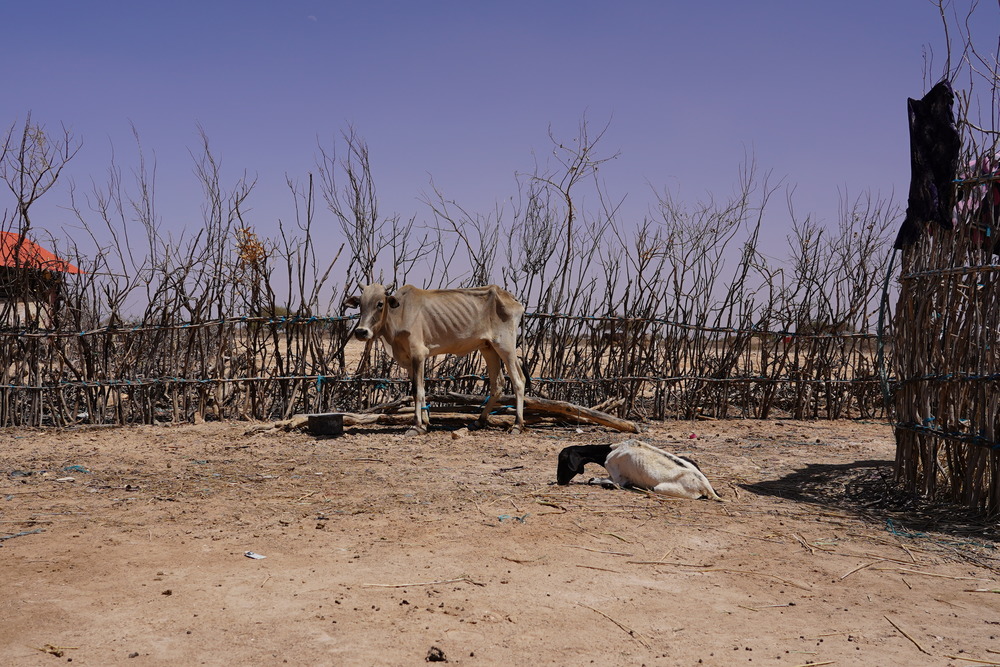 Maria Gerth-Niculescu/TNH
Weakened animals struggle to stand outside the house of a herder in Ethiopia’s Somali region. Funding shortages have led to delays in livestock vaccination for disease-prone animals.

“Sleep doesn’t come to me at night because of all the worries,” said Ibrahim Abdi, who walked for 15 days to reach the small town of Dekeye, an hour’s drive from the Somali regional capital of Jijiga.

Ibrahim said the local community has provided him with shelter, food, and fodder, but that his sick cattle are continuing to die. “Given the severity of the situation, my wife is asking me to come back so that at least we can die in the same place,” Ibrahim said.

If humanitarian assistance is not quickly scaled up in Somali and other drought-affected regions, Seid, of FAO, said the cost to donors could be ten times higher in terms of emergency provisions of food and medicine.

Still, Seid said calling for emergency action is only “solving the symptoms” and that donors should also focus on building the resilience of pastoralists against droughts that are set to strike “again and again”.

The New Humanitarian travelled to the Somali region using transportation provided by the FAO. Edited by Philip Kleinfeld.