A donor conference in Rome next week will be asked to pledge $70 million to tackle a plague of desert locusts critically threatening rural livelihoods in a region where tens of millions of people already face extreme hunger.

Swarms of the insects are sweeping across eastern Ethiopia, neighbouring areas of Somalia, and are pouring into Kenya, destroying crops, pasture, and forest cover throughout the region on an unprecedented scale.

"This has become a situation of international dimensions that threatens the food security of the entire subregion,” said UN Food and Agriculture Organisation Director-General Qu Dongyu, whose agency is convening the 30 January meeting in Rome.

"Authorities in the region have already jump-started control activities, but in view of the scale and urgency of the threat, additional financial backing from the international donor community is needed so they can access the tools and resources required to get the job done," he said.

Unusually heavy rains late last year favoured breeding, triggering a locust outbreak that is the worst Ethiopia and Somalia have faced in 25 years – and the most extreme Kenya has experienced for 70 years.

Swarms – capable of travelling 150 kilometres a day – are heading through Kenya and may spread into South Sudan and Uganda. Even Rwanda in central Africa is beginning to take precautions.

“Swarms are increasing in numbers and density as we speak – they could increase 500 times in numbers by June,” Daniele Donati, co-chair of FAO’s desert locust task force, told The New Humanitarian.

As locusts mature into their so-called “gregarious” phase, they become voracious eaters, stripping whatever vegetation they find, and able to consume their body weight in a day. A single small swarm can contain 150 million insects.

One super-swarm in northeast Kenya was estimated at 2,400 square kilometres, with the potential capacity to eat in a day the same quantity of vegetation that could feed as many as 84 million people.

“We must act now,” UN humanitarian chief Mark Lowcock said in a statement on Wednesday, announcing the release of $10 million from the UN’s Central Emergency Response Fund to support the FAO.

The allocation will fund a “massive scale-up in aerial operations to manage the outbreak,” the statement said, referring to the deployment of pesticide-spraying planes that can wipe out the swarms. 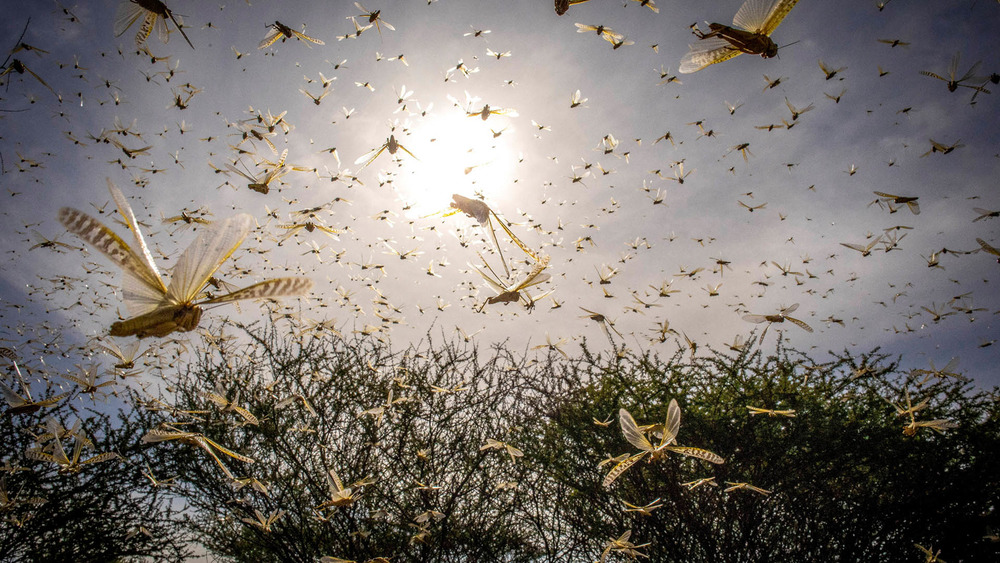 Six planes can cover 1,000 square kilometres in a month, which “would be adequate for the time-being”, noted Donati.

But, at the moment, Ethiopia and Kenya only have four spray planes each, and the insecurity in Somalia means any form of control measures are risky.

“The region is not prepared for this scale of infestation,” Jasper Mwesigwa, a food security analyst with the regional Climate Predictions and Application Centre, told TNH. “No single country has the capacity to manage this on their own – so many resources are required.”

A critical issue is coordination. Swarms don’t obey national boundaries, and agreements would need to be struck to manage the region’s airspace and allow spray planes to cross borders.

And while there are sufficient supplies of pesticides, there will need to be cooperation so stocks can be shared and deployed to where the need is greatest.

“It’s in the region’s interests to coordinate the response,” said Donati. “Otherwise, the consequence is an ineffective response.”

The Horn and East Africa has been hard hit by drought and, late last year, flooding. Locusts are yet another burden that will make recovery among already struggling rural communities all the harder.

In some parts of Ethiopia there have been 100 percent crop losses. In others, farmers knew the locusts were on their way and harvested too early, before their crops had matured. Locusts are currently moving towards the Rift Valley, the country’s breadbasket.

“We will feel the consequences of this for several seasons,” FAO Subregional Coordinator for Eastern Africa David Phiri told TNH. “But the longer [locust] control doesn’t happen, the greater the losses.”

Rains due in March through to May will see a surge in locust numbers as vegetation thickens and damp soils allow egg-laying. It will be the critical time to check the outbreak – otherwise this will become a multi-year crisis, according to Phiri.

In June, dry weather in much of the region will act as a natural break, but it will be wet in parts of Ethiopia and Somalia, allowing locust swarms to regenerate.

With large areas of the country out of bounds to the government and aid agencies because of insurgency, Somalia provides the locust with a particular window of opportunity.

“For Kenya, the worry is the lack of control at source,” said Mwesigwa. “The locust invasion is coming through parts of Somalia and the Somali region of Ethiopia.”

If the donors agree at the Rome meeting to the $70 million ask for the region’s control efforts it will be welcome, but it’s still “very conservative”, said Phiri. “We hope we can get that and more.”

Here’s a country by country snapshot:

How the locust swarms are spreading across eastern Africa.

More than 2,350 square kilometres of crops, pasture, and forest cover has been affected in Afar, Amhara, Oromia, Somali, Tigray, and the Southern Nations, Nationalities, and Peoples' regions. Fast-moving swarms keep arriving from undetected areas in Ethiopia as well as adjacent areas of Somalia.

Tens of thousands of hectares of land have been affected in Somaliland, Puntland, and Galmudug, and there are mature swarms in the Garbahare area, near the Kenyan border.

Immature swarms (not yet able to reproduce) have migrated south to Hirshabelle, Jubaland, and South West states.

The risk to both pasture and crops in 2020 “remains high and critical given the ever-expanding areas affected,” FAO warns. Given the favourable ecological conditions, the desert locust population is expected to continue to grow in the north and migrate south. Over the next six months, more than 100,000 hectares will require some form of direct control. 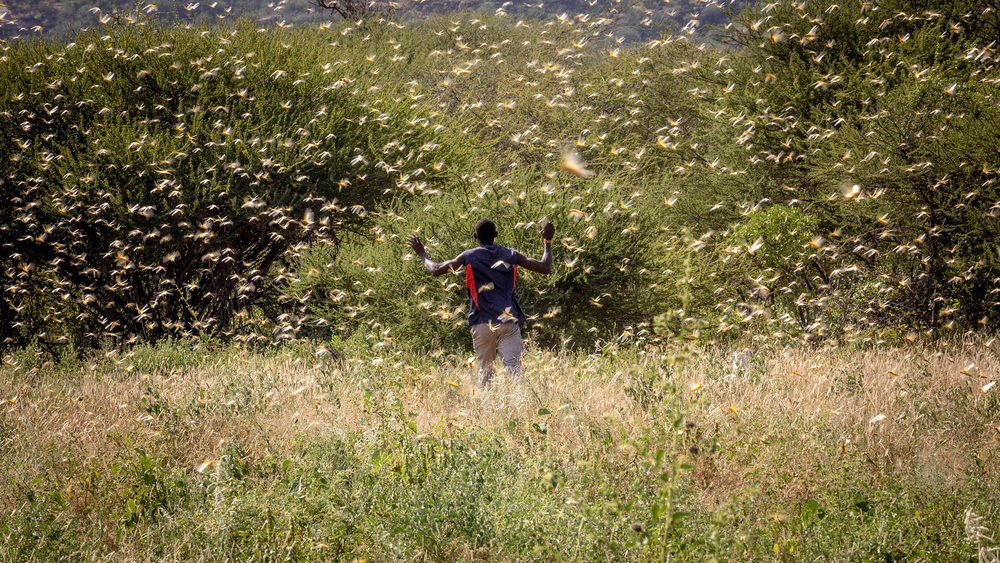 @FAO/Sven Torfinn / FAO
A man walks amongst a swarm of locusts in Kenya. The UN's Food and Agriculture Organisation warned on Monday that the swarms, which have reached Somalia, Kenya, and Ethiopia, could spill over into more countries in eastern Africa.

Some swarms in the north have moved back into southern Ethiopia, while others are now mature and laying eggs that are expected to hatch in a fortnight. This will result in ground-based hopper bands – the stage before swarms form – in February and March.

There is a high risk of “a few swarms” arriving in the southeast (Kapoeta East and Ilemi Triangle) from northwest Kenya, according to FAO.

A “moderate risk” of a few swarms appearing in the northeast from northwest Kenya.