Read about what we achieved.
DOLO ADO

Dead camels rot on the outskirts of informal settlements in Ethiopia’s rain-starved Somali region as their owners, once proudly self-sufficient pastoralists, turn to government aid to stay alive.

Ethiopia is facing a drought so terrible that nomadic herders, the hardiest of survivors, have been pushed to the brink. The lucky ones receive supplies of food and brackish water, but the majority, who have settled in spontaneous camps in the remotest reaches, must look after themselves.

“We call this drought sima,” said 82-year-old Abdu Karim. “It means ‘everyone is affected’. Even when I was a child, no one spoke of a drought like this one.”

Across the Horn of Africa, people are struggling after three successive years of failed rains. In Somalia and Yemen, there is real fear of famine. While Ethiopia’s remote southern region has been spared the warfare that has deepened the crisis confronting its neighbours, the drought has been no less brutal.

“Having lost most of their livestock, they have also spent out the money they had in reserve to try to keep their last few animals alive,” said Charlie Mason, humanitarian director at Save the Children.

“For those who have lost everything, all they can now do is go to a government assistance site for food and water.”

Livestock are the backbone of the region’s economy. Pastoralists here are estimated to have lost in excess of $200 million-worth of cattle, sheep, goats, and camels. That is not only a blow to their wealth, but also deprives them of the meat and milk that is the mainstay of the pastoralist life-support system.

Last year, more than 10 million people were affected by an El Niño-induced drought. The government spent an unprecedented $700 million, while the international community made up the rest of the $1.8 billion needed to meet their needs.

This year, the appeal is for $948 million to help 5.6 million drought-affected people, mainly in the southern and eastern parts of the country. So far, only $23.7 million has been received.

“Last year’s response by the government was pretty remarkable,” said World Vision’s Ethiopia director, Edward Brown. “We dodged a bullet. But now the funding gaps are larger on both sides. The UN’s ability is constrained as it looks for big donors – you’ve already got the US talking of slashing foreign aid.”

The government has a well-established safety net programme managed by the World Bank that supports the chronically food insecure, typically with cash-for-work projects.

But it doesn’t pick up those affected by sudden shocks like the current drought. They fall under a new and separate programme, which is struggling to register all those in need.

There are 58 settlements for the internally displaced in the Somali region currently receiving government aid. But that’s only a fraction of the 222 sites containing nearly 400,000 displaced people identified in a survey by the International Organization for Migration.

Forty-four percent of these camps reported no access to food, and only 31 percent had a water source within a 20-minute walk.

"People were surviving from what they could forage to eat or sell but now there is nothing left,” said one senior aid worker who visited a settlement 70 kilometres east of the southern town of Dolo Ado, where 650 displaced pastoralist families weren’t receiving any aid at all.

The only livestock left alive in the camp was one skinny cow, its rib cage undulating through its skin, and her new-born calf. In some shelters people were reported as too weak to move. 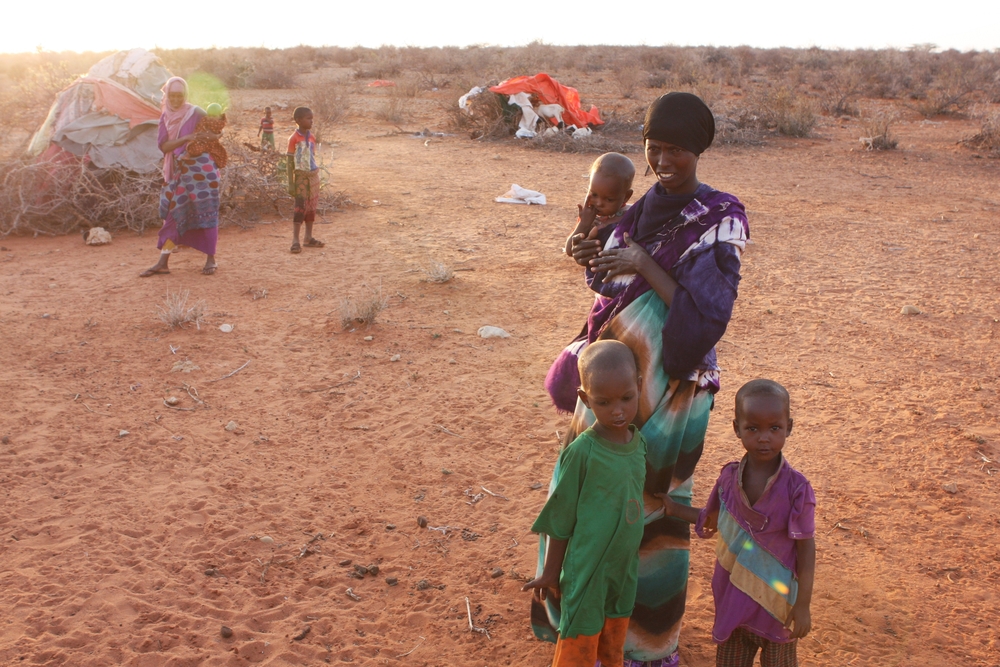 James Jeffrey/IRIN
IDPs are falling through the cracks

Informal settlements have sprung up wherever the exhausted pastoralists have stopped. The further away from the regional capital, Jijiga, the less likely they are to be supplied by the government. There is also a degree of friction between the federal government and the semi-autonomous regional authority.

“There’s a logical reason to limiting the number of temporary assistance sites – because otherwise getting assistance to people scattered over such a large area becomes a massive challenge,” said Mason.

“The authorities are doing their best. This is a natural disaster, which has affected a huge number of people over an area larger than the UK or New Zealand, and we’re in a race against the clock to get enough food and clean water to enough people in time.”

But given the security restrictions on travel in the Somali region, and the well-known nervousness aid agencies have over antagonising the government, it is very hard to gauge how many people may have fallen through the cracks and are not receiving assistance.

The Ethiopian government is far more open over the refugees it helps. It has maintained an open-door policy and currently shelters an estimated 800,000.

Just outside Dolo Ado, where the Ethiopian border intersects with Kenya and Somalia, are two enormous camps. With rows of corrugated iron roofs glinting in the sun, each houses about 40,000 Somalis escaping their own food crisis and ongoing conflict.

“I came with my family because of drought and fear,” said 51-year-old Hasaam Muhammed Ali. He arrived in Buramino camp in 2012 with his two wives and 17 children. “People have different opinions but I know what is there – I will not go back. Perhaps, if the country gets peace like Ethiopia, I might.”

Refugees complain of headaches and itchy skin due to the pervading heat of 38 – 42 degrees Celsius, and of a recent reduction in their monthly allowance of cereals and grains from 16 to 13.5 kilograms.

However, they are guaranteed that ration, along with water, health and education services – none of which is available to IDPs in a settlement on the outskirts of Dolo Ado.

“We don’t oppose support for refugees – they should be helped as they face bigger problems,” said 70-year-old Abiyu Alsow. “But we are frustrated as we aren’t getting anything from the government or NGOs.”

Abiyu spoke amid a cluster of women, children, and a few old men beside makeshift domed shelters fashioned out of sticks and fabric. Husbands were away either trying to source money from relatives, looking for daily labour in the town, or making charcoal for family use and to sell.

“When people cross borders, the world is more interested,” said Hamidu Jalleh from the UN’s emergency aid coordination office, OCHA. “Especially if they are fleeing conflict, it is a far more captivating issue. But the issue of internally displaced persons doesn’t [generate] the same attention.”

In the Somali region’s northern Siti zone, IDP camps from droughts in 2015 and 2016 are still full. It takes between seven and 10 years for pastoralists to rebuild flocks and herds after losses of more than 40 percent, according to research by the International Livestock Research Institute and the UN’s Food and Agriculture Organization.

"Humanitarian responses around the world are managing to get people through these massive crises to prevent loss of life,” said Mason. “But there's not enough financial backing to get people back on their feet again.”

And Ethiopia’s crisis is far from over. The main spring Gu/Ganna rains have finally begun in parts of the Somali region, but they were a month late.

The forecast is that they will be below average and won’t regenerate pasture sufficiently for the pastoralists, who have lost so much, to rebuild their lives.