All our reporting on the second deadliest Ebola outbreak yet recorded.
More of this in-depth coverage
BENI, Democratic Republic of Congo

Bienvenue Tsimbula is worried about Ebola, but he’s now more scared of Ebola response teams. In June, the police escorting one of these teams shot him in his hometown of Aloya, in eastern Democratic Republic of Congo.

That day, Tsimbula was heading to get a jab against the deadly virus. At the vaccination site, the health workers were escorted by Congolese police officers who were facing off against a group of local protesters asking the medical team to leave.

The locals threw a few stones, according to witnesses; the police officers responded with live bullets. Tsimbula, a bystander, was shot in the spleen. Two others were hit in the neck and back. All three required surgery but survived.

“I spend the day at home sitting, and when I’m too tired to sit, I lie down,” said Tsimbula, whose injuries left him unable to farm his fields.

He and several other residents interviewed by The New Humanitarian in July near the epicentre of the outbreak in North Kivu province said their trust in the relief effort had been compromised by the heavy-handed government security forces who regularly escort health workers.

A July report from the UN's Office of the High Commissioner for Human Rights highlighted the "disproportionate use of force" by police and army personnel dealing with protests against Ebola responders.

The security forces have also imposed Ebola prevention measures by force, such as safe burials, according to testimonies collected by TNH from several mourners and burial teams.

In July, after the outbreak was declared an international health emergency, the government coordinator for the Ebola response in North Kivu at the time, Aruna Abedi, said security forces would increase their involvement in the response, enforcing infection controls such as hand-washing and temperature checks. Abedi left his post in August as a wider reshuffle took place in the response leadership.

In recent months, there have been fewer reports of violence surrounding the Ebola response. Still, the impact of earlier violence lingers in communities within the outbreak region, the residents interviewed by TNH suggested.

The head of the Congolese government’s Ebola response, Jean-Jacques Muyembe, told TNH via WhatsApp last week that he was not aware of shootings during burials but said, “if true, it would be a grave mistake that the [Ebola response] coordination condemns in the strongest terms”.

When Floris Kayumba died, his friends prepared his grave. But when tests determined he had died of Ebola, burial plans changed and tensions rose at the hospital and the cemetery. 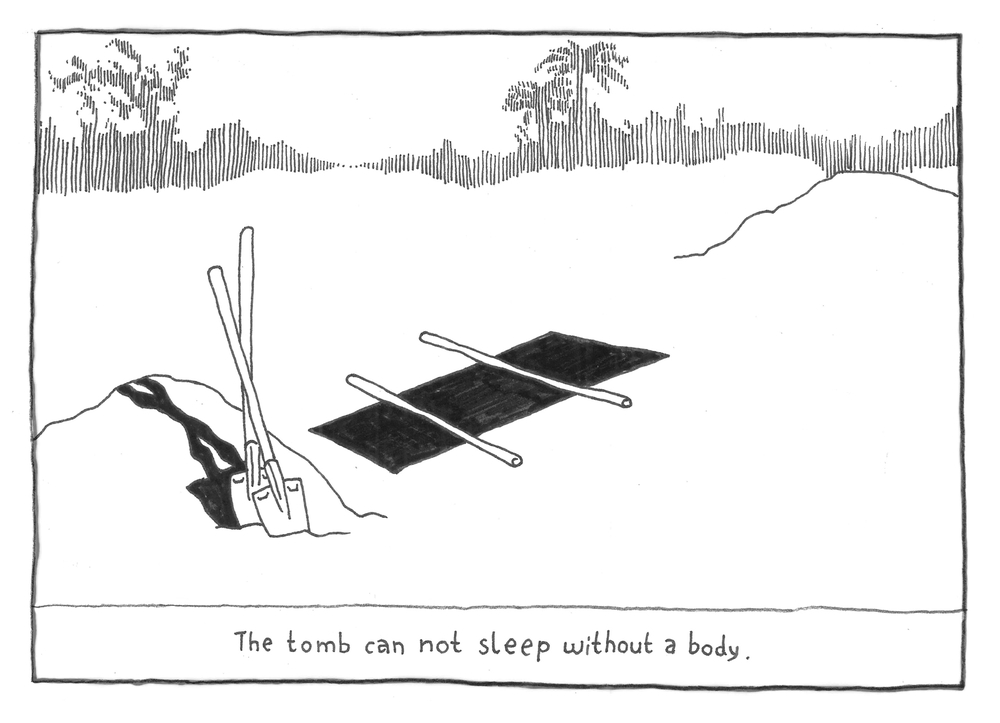 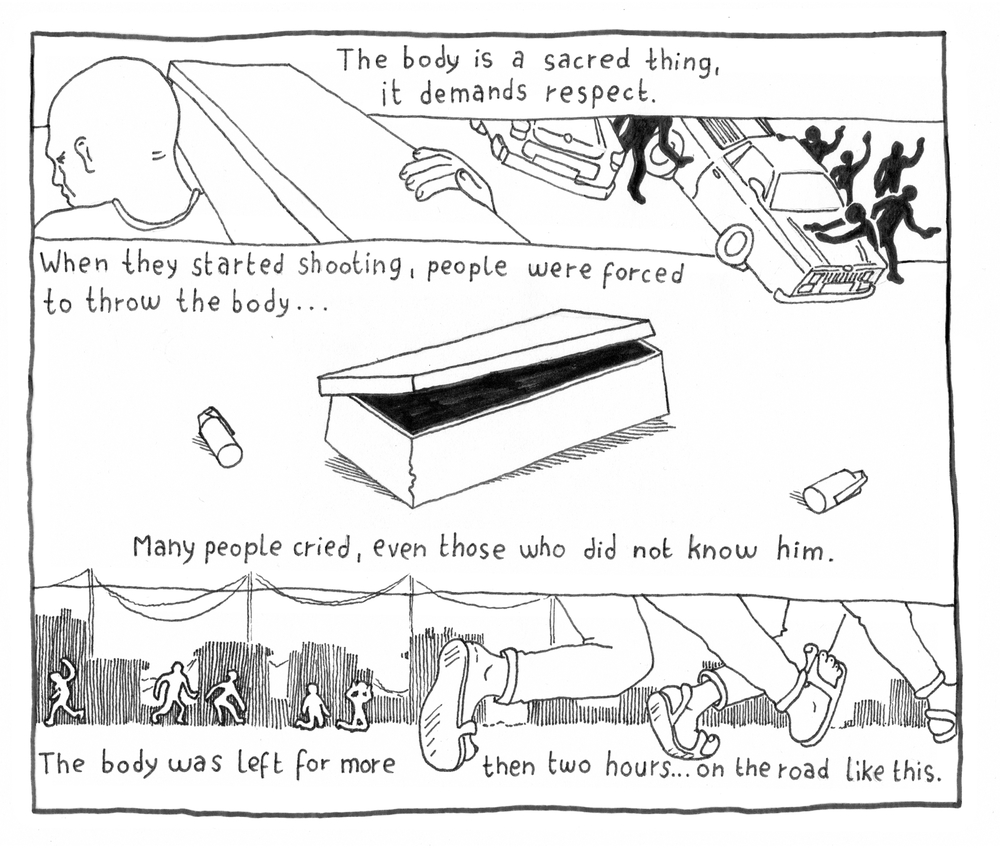 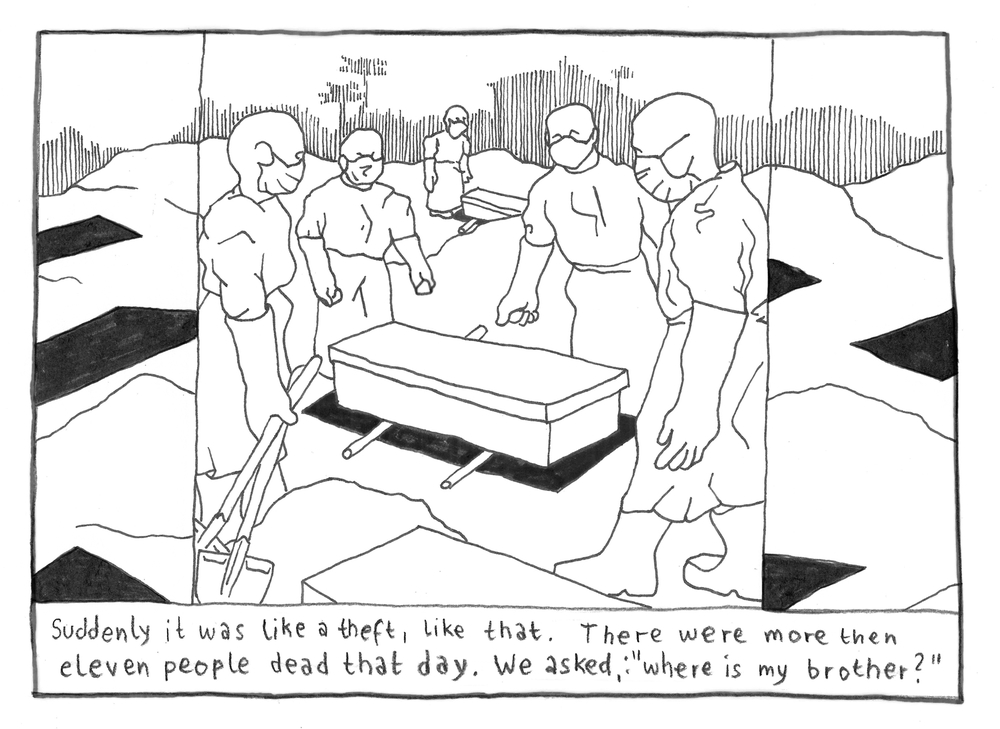 (Illustrations by Leif Czakai and Mark Henning, based on interviews by Emmanuel Freudenthal.)

Several aid agencies have warned against the use of security forces by the Ebola response, which Médecins Sans Frontières (MSF) has described as “militarisation”. The International Federation of the Red Cross (IFRC) explained that “increasing armed protection for Ebola responders may aggravate the tensions that already exist between communities and responders”.

Such actions may also have worsened the epidemic.

Aid groups say lack of trust in the response among residents in the outbreak area has stalled containment efforts, allowing the virus, which has now taken more than 2,130 lives, to spread. The distrust has also contributed to over 200 attacks on responders and treatment centres since January, leaving at least seven health workers dead.

The World Health Organisation (WHO), which assists the government in coordinating the relief effort, has explained community resistance towards Ebola workers as the product of “decades of suspicion” that ordinary people hold towards a central government that has been unable to protect them.

Over the past two years, more than 1,900 civilians have been killed in conflict in Congo. Almost one third of them died in Beni Territory – the outbreak’s epicentre – at the hands of armed groups and even the government’s own security forces, according to researchers.

The residents TNH spoke to in July said their mistrust in the national government was confirmed last year when long overdue presidential elections were postponed again in Beni and nearby Butembo – while most of the rest of the country voted – ostensibly to prevent the spread of Ebola.

They also said they viewed the outbreak, which has seen a large influx of foreign aid, as a profit-making enterprise for aid agencies and government officials.

Beyond these factors, however, those interviewed by TNH offered another reason for the breakdown in trust: the violence they said they face from the Ebola response itself, especially from the Congolese security forces.

The burial of Ebola victims has turned into a particular flashpoint, one where health controls and best practice collide with Congolese culture.

However, Ebola victims are at their most contagious in the days after death, so these rites are eschewed and bodies are instead laid to rest in zip-up plastic bags handled by health workers wearing medical suits and latex gloves.

According to notes from an Ebola response coordination meeting held in June in Goma, capital of the worst-hit province of North Kivu, the WHO argued that force should be used when community members resist this protocol, and Abedi, the response coordinator, agreed.

“We tried community engagement. It doesn’t work. We need to use force,” Abedi was quoted as saying, according to the notes, which were forwarded to TNH in an email by someone present in the meeting.

The notes also mention that an unnamed local WHO representative “stated that force should be used when there are refusals [over safe burials], and that the police or army should take the body and bury it”.

In an email, a WHO spokesperson contacted by TNH said they “do not recommend [the] use of force” in such situations. Abedi did not respond to requests for comment by the time of publication.

Members of burial teams – usually local residents employed by the government – interviewed by TNH in Beni said security forces regularly shoot in the air when tensions boil over, adding to the pain and trauma of grieving relatives and friends.

For example, Belinda Kichomivwa was a student at  St. Bertrand high school until her death from Ebola on 19 June.

The following day, her classmates and her head teacher turned out for her funeral at an Ebola cemetery outside Beni. They had to wait five hours for the coffin to arrive, according to three fellow students and the head teacher.

As time went by, suspicion grew that something had happened to Belinda’s body – some people worried that body parts had been stolen, echoing fears also expressed during the 2014-2016 West African outbreak.

When the coffin finally arrived, Belinda’s classmates asked to see her body, but the burial team refused, as per response guidelines. Although there was no violence, arguments ensued and tensions built until police officers and soldiers shot in the air. Mourners were sent scampering; some, according to witnesses TNH spoke to, fainted in the cemetery grounds.

“It dishonoured the death of our colleague,” one of Belinda’s friends said.

Rapid treatment of Ebola boosts the chances of survival, and rapid tracing of contacts of infected people – and contacts of those contacts – can help to contain the spread of Ebola as they can be vaccinated against the virus.

According to MSF, coercive methods have been used to force reluctant people into treatment centres and to track the contacts of those infected – a tactic the medical aid agency says “discourages people from coming forward”.

Coercion may also have fostered violence against health workers.

In June, the WHO was forced to suspend its activities in Beni after several young assailants on motorbikes attacked a response team that had come to replace contaminated mattresses at a health centre where someone had died of Ebola. The team’s car was burnt and several health workers were badly injured, narrowly escaping death.

Motorbike taxi drivers and other young people in the neighbourhood interviewed by TNH suggested the violence – one of many similar incidents this year – didn’t come out of nowhere.

Without confirming who the assailants were, they said their community was angry after a colleague was transferred to an Ebola treatment centre against his will and died a short while later. A nurse who was present disputed this account. Speaking on condition of anonymity, she said the man went voluntarily.

Regardless of whether the man was coerced into a treatment centre or not, the incident added to a growing sense of resentment in the neighbourhood, where several people had died of Ebola in the preceding weeks.

“[The youths were thinking] those people [working for the response] are killing us… we too have to kill them,” said Narcisse Sombe, an activist with the campaign group LUCHA who witnessed the Beni attack.

In June, friends of Floris Kayumba, who had worked at a local radio station, gathered at the morgue in Beni’s hospital to collect his body after, they said, an Ebola test came back negative. They had bought a coffin and dug a grave.

When they arrived to pick up the body, a second set of test results came: Kayumba had actually died of Ebola.

Upset over what they saw as a lack of respect and resistance to their efforts to follow the usual burial practices, the group took the body without authorisation and started walking down the street with the coffin.

Two cars full of police officers emerged suddenly from a side street and ordered the group to lower the coffin to the ground. When the mourners refused, the police fired tear gas and shot into the air. Kayumba’s friends scattered, dropping the coffin on the street.

Kayumba was buried the next day in Beni’s Ebola cemetery. His friends said they nearly missed the ceremony because the Ebola response didn’t call as promised. They said they only made it by chance, because someone informed them that the hearse had left the morgue.

One friend, Job Star, described the taking of the coffin as “like a theft”.

“I was feeling really, really bad,” Star recalled. “A body is a sacred thing.”

He didn’t complain, however. “There were security forces,” he said. “If you ask too many questions, they can tie you up. We let the health workers do their job, and we went home.”