Hundreds of migrants and asylum seekers residing at a flagship facility in the Libyan capital faced an uncertain future on Friday after the UN’s refugee agency announced it was suspending work there due to fears over the centre’s safety amid Libya’s escalating conflict.

Several of the 700 residents of the Gathering and Departure Facility (GDF) spoke of their anxiety after UNHCR announced the move on Thursday, saying it fears “the entire area could become a military target, further endangering the lives of refugees, asylum seekers, and other civilians”.

The agency has “started moving dozens of highly vulnerable refugees, who have already been identified for resettlement or evacuation to third countries, from the facility to safer locations”, a UNHCR statement said, adding that it will “facilitate the evacuation of hundreds of other people to urban areas”.

A recording of the announcement made inside the facility on Thursday, and shared with The New Humanitarian, said UNHCR “will remain at the GDF for the next few days to arrange the relocation to urban setting and organise the ordered exit of 100 persons per day”.

Opened in late 2018 after international donors pitched in $6 million, the hope was that the GDF could serve as a well-ordered waystation for people about to leave the war-torn country through resettlement to another country, family reunification, or by other means.

But fighting broke out in April 2019 in and around Tripoli between the UN-backed government and eastern forces led by General Khalifa Haftar, leading to increasing chaos, displacement, and a deadly strike on the Tajoura detention centre, just outside the capital.

More and more people sought help at the GDF, and by November UNHCR said it could no longer help or protect the people inside. In a controversial move, it began telling people they would "not be considered for evacuation or resettlement" if they stayed, alongside offering money and other aid if they left.

The UN has said it believes Tripoli and other cities – where the majority of the country’s more than 630,000 migrants, refugees, and asylum seekers live – are the best options for people to get help.

But several residents inside the GDF expressed concern: “People are refusing to go out, and don’t know what to do. They stopped giving food yesterday,” said one survivor of the Tajoura airstrike, who spoke to TNH via WhatsApp from inside the GDF on Thursday.

“We don’t know what to do. UNHCR told us they will come back on Sunday. But where can we go? We don’t have anywhere to go.”

TNH understands some people have already agreed to leave the centre, but it is not clear what will happen to others if they insist on remaining.

In response to the allegation that food was not being provided, a UNHCR spokesperson said “food services are as normal". Food has in the past been provided by a catering firm and, in emergency situations, aid agencies.

An internal UNHCR update from last week, seen by TNH, says the "majority of PoCs [persons of concern] suffer from frustration, anxiety, and stress due to their limited choices and hopelessness in the desired solutions".

The conflict in Tripoli has seen an uptick in fighting in the past month, and on 2 January shells fell close to the GDF.

Since December, the UN-backed government’s Department for Combating Illegal Migration (DCIM), which has an office across the street from the GDF, has been training soldiers just a few metres away from the facility. 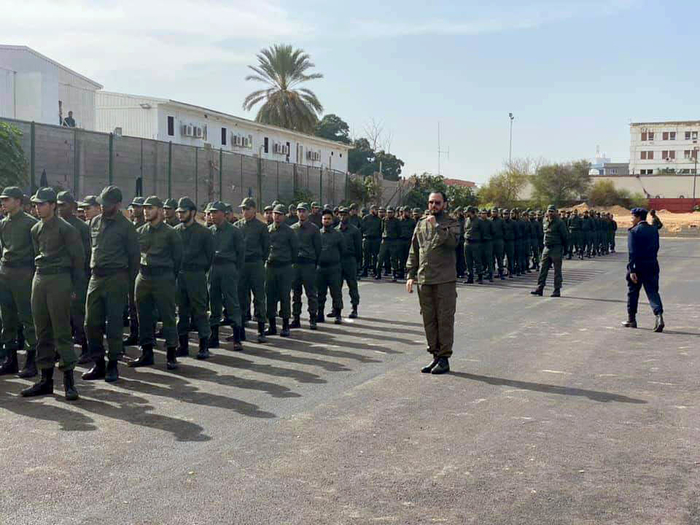 DCIM/TNH
Soldiers train outside Tripoli's Gathering and Departure Facility, which the UN’s refugee agency has said is no longer safe.

In announcing its suspension on Thursday, UNHCR also released a statement noting that “training exercises, involving police and military personnel, are taking place just a few metres away”.

The Libyan Ministry of Interior has jurisdiction over the GDF via the DCIM, and Lt. Abdul Naser Hazam, head of the Tripoli branch of the DCIM, confirmed to TNH that it was training at the location.

“The [DCIM’s] personnel are receiving their training in the field of combating irregular migration, in order to raise their capabilities and develop their skills, especially considering the conditions that Libya is currently experiencing,” he said.

Sources inside the DCIM, UNHCR, and Libaid – the UN’s local partner agency at the centre – all said the plan had been to keep services going at the GDF until at least March, but debates had been ongoing about what to do about the collapsing location, which has for months been effectively controlled by the DCIM and militias associated with it, and had become unsanitary and dangerous.

According to one UNHCR staff member in Tripoli, who requested to remain anonymous because they were not authorised to speak about the sensitive subject, the facility had increasingly been seen as tarnishing the agency’s reputation. “Some want to shut down the GDF project and end this chapter of wasted resources,” the source said.

According to a report by the UN Support Mission in Libya, submitted 15 January to the Security Council, some 3,200 migrants and refugees are currently held in detention centres run by the DCIM and controlled by armed groups, including an estimated 2,000 people who are “exposed, or in close proximity, to the fighting in and around Tripoli”.

With additional reporting from Annie Slemrod.