Years of conflict have already fuelled alarming levels of untreated mental illness in Indian-administered Kashmir. But an ongoing military clampdown, now in its fifth month, is adding to civilian trauma in the disputed region.

Nearly one in five people in Kashmir show symptoms of post-traumatic stress disorder, according to a 2015 study by Médecins Sans Frontières and the Srinagar-based Institute of Mental Health and Neurosciences, or IMHANS.

Separate 2016 research published by IMHANS and ActionAid estimated that 11.3 percent of the population had a mental health disorder – higher than the national prevalence of around seven percent. But few were able to get treatment.

Dr. Arshad Hussain, a psychiatrist who co-authored the ActionAid study, calls Kashmir one of the “saddest places in the world”.

“The chaos that Kashmir has witnessed over the years has definitely deepened this problem,” he said.

The situation has escalated as India clamps down on anti-government protests and a decades-long insurgency. Conflict deaths rose to a decade-high last year. The Kashmir valley has been on lockdown since 5 August, when India moved to strip Jammu and Kashmir of its statehood and semi-autonomous status, imposing curfews, cutting off communications, and boosting troop levels in an already heavily militarised region. 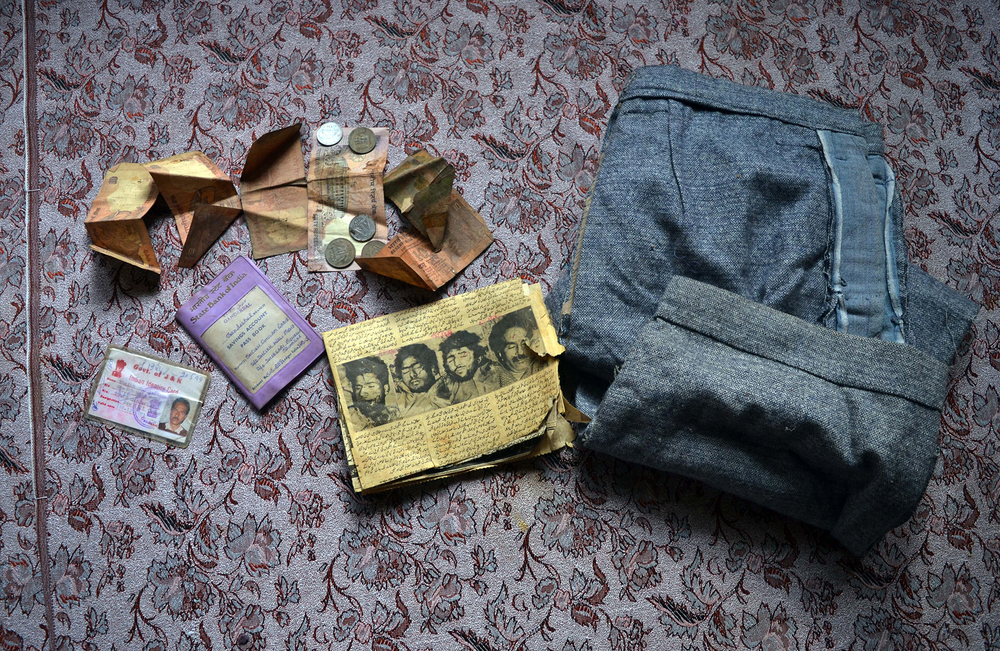 Masrat Zahra/TNH
Arifa Jan keeps newspaper clippings and the blood-stained notes her husband, Abdul Qadir Sheikh, was carrying when he was gunned down in 2000.

Arifa Jan, 49, knows what it’s like to live with mental suffering. In 2000, soldiers shot and killed her husband, whom they suspected of being a militant.

Nineteen years later, she can still hear the gunshots and sees her husband’s blood-soaked body when she thinks of him, which drives her to frequent panic attacks.

“There were 18 bullet holes and I still remember how deep they were.”

“I couldn’t come to terms with the agony and pain inflicted on me,” she said. “There were 18 bullet holes and I still remember how deep they were.”

Dr. Mushtaq Margoob, a psychiatrist who has treated Arifa for the past two years, said she suffers from high levels of PTSD, her husband’s death leaving a deep imprint on her mind.

“It’s not just one case,” said Margoob, the former head of the psychiatry department at Srinagar’s Government Medical College. “There are thousands of cases like this where the effects of conflict are very much visible.” 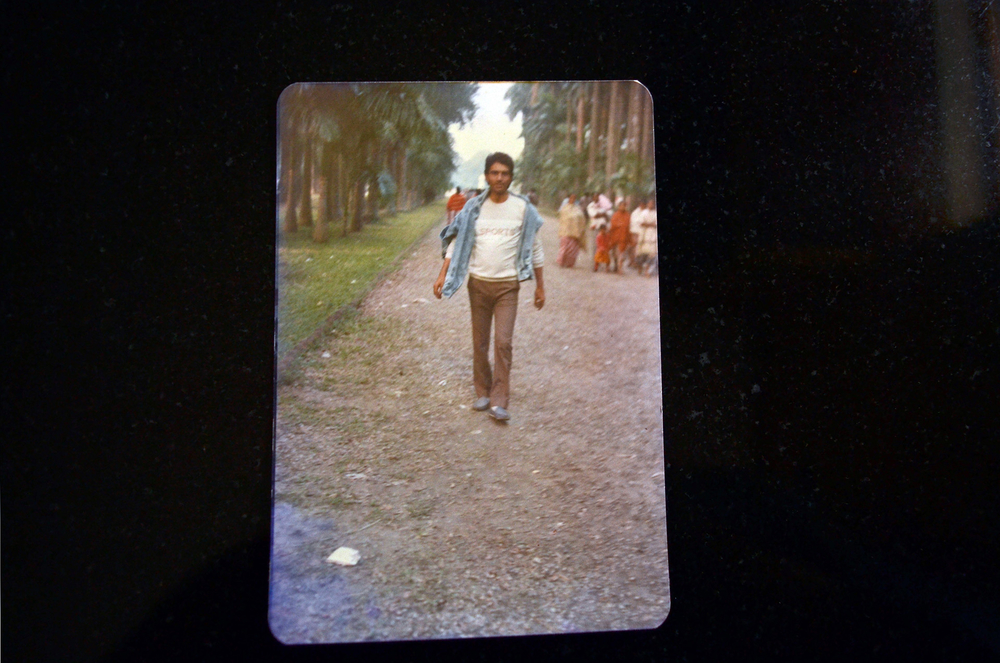 Masrat Zahra/TNH
A photograph shows Abdul Qadir Sheikh, who soldiers suspected of being a militant when he was shot and killed in 2000.

Parvez Imroz, a lawyer and activist who heads the Jammu Kashmir Coalition of Civil Society, draws a direct line between the region’s rampant rights abuses and its residents’ untreated trauma.

In a report this year, the NGO documented 432 cases of torture dating back to 1990, calling it an “instrument of control” used to maintain authority in Kashmir.

The UN Human Rights Office has also detailed hundreds of cases of extrajudicial killings, enforced disappearances, sexual violence, and other abuses that largely escape investigation or prosecution. Allegations of arbitrary arrests and torture are continuing through the current military lockdown.

The more violence, the greater the trauma, Imroz said. “It is a crisis here in Kashmir, and it has involved every age group.”

Mental health experts say there’s a shortage of treatment despite the widespread trauma.

The IMHANS and ActionAid study estimated only 6.4 percent of people with a mental illness had seen a psychiatrist, and only 12.6 percent sought any kind of healthcare help at all.

Hussain, the study’s co-author, says this is partly to blame on stigma and a poor understanding of mental illness.

But almost all mental health services are concentrated in Srinagar’s hospitals, meaning they’re often inaccessible to patients in rural areas – a problem worsened by ramped-up security and checkpoints during the initial months of the lockdown.

“When these patients come back to us after a long gap, we mostly find that the condition of these patients has worsened, making it more difficult to treat them,” said Dr. Saleem Yousuf, a psychiatrist at Srinagar’s Shri Maharaja Hari Singh, the region’s main hospital.

The ActionAid study called for the government to ramp up mental health outreach and services, especially at the district level closer to distant communities. 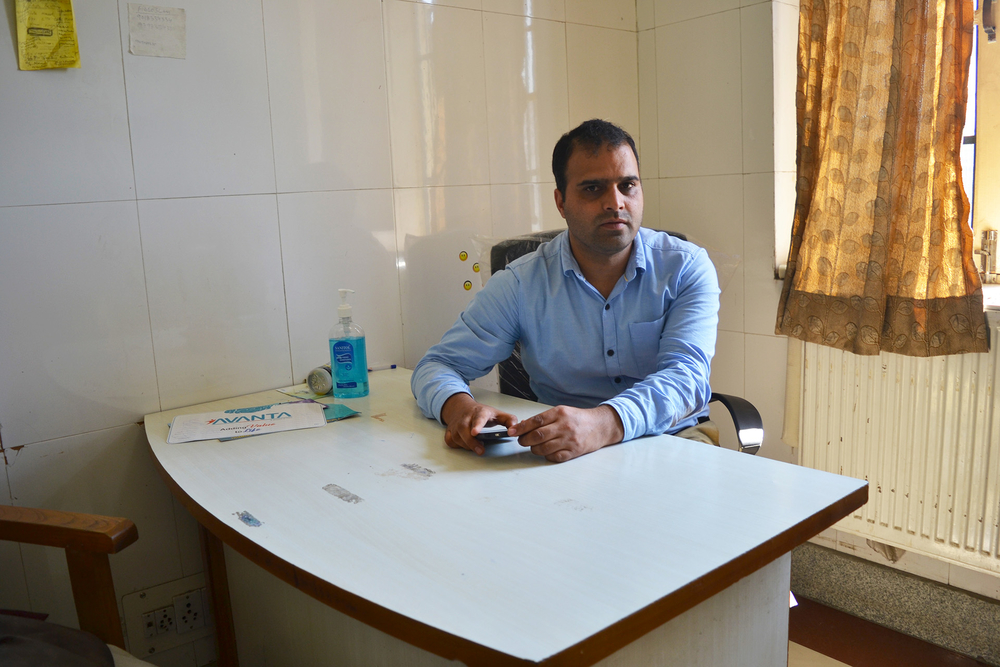 An October paper by a group of academics and activists researching the crackdown in Kashmir reported that the programme was functional in only two districts amid “an acute shortage of psychiatrists” across Kashmir.

“It will be highly surprising if a few months from now we do not find extraordinarily high rates of PTSD,” wrote Dr. Anirudh Kala, a psychiatrist and one of the paper’s researchers.

“The government has to take the decision on this,” Dolma said.

The transmission of trauma

Rights advocates say young Kashmiris are being driven to militancy by a long history of unresolved abuses and perpetual instability.

And while mental health treatment lags and instability continues, experts fear trauma is also being passed on to the youngest generation.

There’s little recent research on mental health among Kashmir’s children. But a 2006 paper co-authored by Mushtaq Margoob studied 100 children between the ages of three and 16 who had symptoms of PTSD.

“It is a crisis here in Kashmir, and it has involved every age group.”

Trauma “gets transmitted from one generation to another, and this cycle continues if this doesn’t get addressed,” said Dr. Hina Afzal, a physician in Kashmir’s only child psychiatry department, which opened at Shri Maharaja Hari Singh hospital earlier this year. The youngest patient is three years old.

Months after Kashmir’s lockdown began, on 5 August, some restrictions have lessened. Military checkpoints have eased and street traffic has returned. An internet shutdown remains, though landline and some mobile phone services have been restored.

The Association of Parents of Disappeared Persons in Kashmir and others have documented a wave of arbitrary arrests under the controversial Public Safety Act, which allows for up to two years of detention without charges or a trial.

With no end to the violence, mental health experts say more must be done to address its consequences.

“If we cannot lessen the burden of conflict, at least there is an urgent need to have better mental health treatment,” said Dr. Yasir Rather, an IMHANS psychiatrist.