This article is part of our in-depth coverage. Read more like this...
COX’S BAZAR/Bangladesh

Rohingya volunteers have told The New Humanitarian that some aid groups began warning in early November that they could be dismissed from paid work programmes, or that they may be given rations instead of modest daily stipends of around $3.50.

Aid officials say negotiations to maintain paid volunteer and cash-for-work programmes are ongoing, and that rumours about pending dismissals may be due to “miscommunication”. But many Rohingya say the government’s cash ban is the latest in a line of tightening restrictions, after authorities blocked mobile internet and increased security in late August.

The government’s NGO affairs bureau ordered an end to cash programmes in September, telling aid groups that local Bangladeshis must be hired instead.

“NGOs must not undertake any cash-distribution projects,” a government notice warned. “If found doing so, punishable measures will be taken.”

Mizanur Rahman, additional secretary for the Office of the Refugee Relief and Repatriation Commissioner, the government body overseeing the camps, said authorities were concerned about refugees using the money to buy black-market ID documents.

“They said they’ll keep us but not give us any money.”

“The main issue was to stop paying cash, which they use to buy fake documents and passports,” Rahman told TNH.

Legal employment and formal education are off limits to refugees in Bangladesh. But paid volunteer work has been central to projects to build roads, prevent landslides, and clear sewage – as well as in helping with outreach and organisation in the sprawling camps, which are home to roughly 900,000 Rohingya pushed from their homes in Myanmar.

Abdullah*, a Rohingya volunteer with the NGO World Vision, said he was told by his team leader that Bangladeshis would be replacing Rohingya workers.

“They said they’ll keep us but not give us any money,” he said. “Now they said there would be no more Rohingya volunteers.”

In a statement to TNH, World Vision said it was not ending its work with volunteers.

“Sometimes the camp context can be quite fluid and miscommunication happens,” said the NGO’s response director, Rachel Wolff.

“World Vision continues to engage daily basis volunteers and casual daily labourers in the camps who earn a small wage as stipulated by UN and government guidelines.” 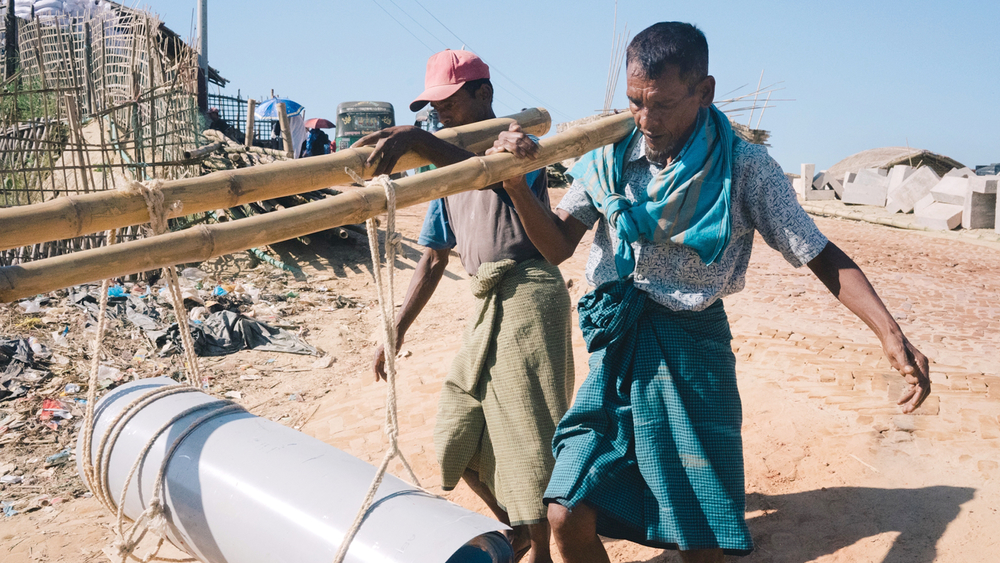 An official with a separate NGO said government negotiations about the role of cash in the Rohingya response are continuing, especially for day labourers doing crucial infrastructure work. The official, who asked not to be named as the issue is considered sensitive, also called confusion over any pending dismissals a “misunderstanding” as many volunteer positions are short-term and NGOs routinely adjust their programming.

However, minutes of aid coordination meetings show there’s deepening concern on the issue as authorities enforce cash bans in parts of the camps.

“Some camps are allowing [cash programmes] till the approved project ends, but in some others, such activities have been stopped,” the minutes of a 30 October meeting reported, adding that some volunteers “are not getting paid due to this restriction from the camp authorities”.

What cash means to refugees

The issue underscores growing government pressures on both refugees and aid groups operating in the Rohingya camps.

In August, an attempt to begin returning refugees back to Myanmar floundered when no one volunteered to go. Afterwards, the government accused some NGOs of encouraging refugees to stay. It soon began enforcing restrictions – including banning the sale of SIM cards, cutting off mobile internet, and constraining movement beyond the camps.

“It seems like they're trying to put pressure on us to go back to Myanmar.”

The government has also announced plans to build a fence around the refugee settlements.

“It seems like they're trying to put pressure on us to go back to Myanmar,” said Mohammed*, a volunteer who said he was dismissed from a World Food Programme project distributing ration tokens shelter to shelter.

The paid work allowed him to supplement his family's own food rations – rice, lentils, and oil – and send his three children to a refugee-run school. He said he recently had to borrow the equivalent of about $25 from a neighbour to cover his costs after losing his volunteer role.

The WFP were among several aid groups that did not respond to interview requests on this issue.

The volunteer and cash-for-work schemes are often geared toward including women, who seldom have the opportunity to be decision-makers in conservative Rohingya society.

Menara, a member of the Rohingya Women's Education Initiative, a Rohingya-run group, said NGO volunteer roles are a rare chance for women to earn money.

“Rohingya women are already not getting enough opportunities, not equal to the males, and it makes it very hard for them to earn a living," said Menara, who uses one name. She added that female volunteers are also better able to work with other refugee women, compared to male volunteers or people outside the Rohingya community.

The aid sector has pledged to increase the use of cash transfers in humanitarian responses. Advocates say cash can be more effective than simply providing goods, letting people make their own decisions about what they need.

Aid groups have advocated for expanded cash programmes in Bangladesh, with limited success.

An October report by the WFP and the UN’s refugee agency, UNHCR, found that 44 percent of refugees have only “borderline food consumption scores” despite receiving food rations that meet minimum nutritional guidelines for aid responses. This suggests that many Rohingya are resorting to “the rampant resale of food” in order to make ends meet, the report said.

After the government’s order forbidding cash, a committee of UN agencies and NGOs advocating for cash transfers stripped the word “cash” from its name “to avoid any conflict with [the government’s] position”, according to meeting records. The group is now called the “Transfers Working Group”.

A humanitarian official who has discussed the issue with the government told TNH that the dispute over cash is a sign of increasingly tense relations with aid groups after the failed August repatriation.

The same September order that banned cash programmes also outlined tighter regulations on the NGO approvals process, and warned against “anti-state, anti-government, or anti-repatriation activities”. Some aid groups have also opposed plans to move refugees to a remote, disaster-prone island.

“Since the deterioration of the relationship, it has been portrayed as a very nationalistic issue of taking jobs from locals,” said the humanitarian official, who also asked not to be named. “But in reality, these are jobs that the local community didn't want to do.”

Abdullah, the World Vision volunteer, worried how he would support his family without a volunteer stipend.

“I don't know why they're doing this,” he said. “No human can live with just rice, lentils, and oil.”

*Rohingya volunteers asked for their names to be changed in this story because they worried there could be consequences for speaking out.