Organized environmental crime is known to pose a multi-layered threat to human security, yet it has long been treated as a low priority by law enforcers, seen as a fluffy “green” issue that belongs in the domain of environmentalists.

But due to a variety of factors - including its escalation over the past decade, its links to terrorist activities, the rising value of environmental contraband and the clear lack of success among those trying to stem the tide - these crimes are inching their way up the to-do lists of law enforcers, politicians and policymakers.

The recent terror attack on the popular Westgate shopping mall in Nairobi, Kenya, has placed environmental crimes like the ivory and rhino horn trade under increased scrutiny. Al-Shabab, the Islamist militant group that has taken credit for the attack, is widely believed to fund as much as 40 percent of its activities from elephant poaching, or the “blood ivory” trade. The Lord’s Resistance Army, a brutal rebel group active in the Democratic Republic of Congo and Central African Republic, is also known to be funded through elephant poaching.

Rising incomes in Asia have stimulated demand for ivory and rhino horn, leading to skyrocketing levels of poaching. Over the past five years, the rate of rhino horn poaching in South Africa has increased sevenfold as demand in Vietnam and other Asian countries for the horn - used as cancer treatments, aphrodisiacs and status symbols - grows.

“Drop in the ocean”

On the international stage, politicians - alarmed by increasing evidence of links between terrorist organizations and organized environmental crime - are taking a more visible stand against wildlife trafficking. In July, US President Barack Obama set up a taskforce on wildlife trafficking and pledged US$10 million to fight it.

But this is a mere “drop in the ocean”, says Justin Gosling, a senior adviser on environmental organized crime for the Global Initiative Against Transnational Organized Crime, which was recently launched in New York.

“If developing countries really want to assist, they need to put up quite a bit of cash,” he added.

Funded by the governments of Norway and Switzerland, the Global Initiative is a network of leading experts in the field of organized crime, which aims to bring together a wide range of players in government and civil society to find ways to combat illicit trafficking and trade.

At the Global Initiative conference, Gosling presented a draft of The Global Response to Transnational Organized Environmental Crime, a report documenting environmental crimes around the world. Such crimes are on the rise in terms of “variety, volume and value”, the report says, and their impact is far greater than the simple destruction of natural resources and habitats. “They affect human security in the form of conflict, rule of law and access to essentials such as safe drinking water, food sources and shelter,” the report says.

The crimes documented range from illicit trade in plants and animals and illegal logging, fishing and mineral extraction to production and trade of ozone-depleting substances, toxic dumping, and “grey areas” such as large-scale natural resource extraction.

The most fragile countries - those lacking infrastructure and effective policing but often rich in untapped natural resources - are the most vulnerable to exploitation, and the poorest communities suffer the most. “For millions of people around the world, local reliance on wildlife, plants, trees, rivers and oceans is as strong as it has ever been,” says the report.

Communities are losing food supplies and tourism jobs through unsustainable hunting, fishing and - often illegal - deforestation. In vulnerable countries like the Maldives, for example, populations are at risk from rising sea levels and climate change brought on, in part, by deforestation.

It is impossible to quantify what proportion of organized crime is environmental crime, although 25 percent is a commonly repeated figure. This number comes from a UN Office on Drugs and Crime estimate of the scope of the problem in the Asia-Pacific region, and it is often extrapolated as a global estimate. Even less is known about how much organized environmental crime drains from the legitimate economy. To complicate matters, the line between environmental and other organized crime is often blurred, since the same trafficking networks are frequently used for both.

“We’re not really trying to look at environmental organized crime in terms of value,” said Gosling. “We’re looking at the global response to the problem. Who are the actors, and what are they doing? Is it sufficient, and if not, what can we do?”

Current efforts are failing. Part of the problem is that legislation and penalties vary enormously between countries. “The range between what may be considered acceptable and highly illegal is vast,” says the report, which argues for better synchronization of goals. There are plenty of international and country-specific strategies but few linkages between them.

These illegal logs were seized, while in transit, and are impounded at district police offices, Riau, Sumatra, Indonesia 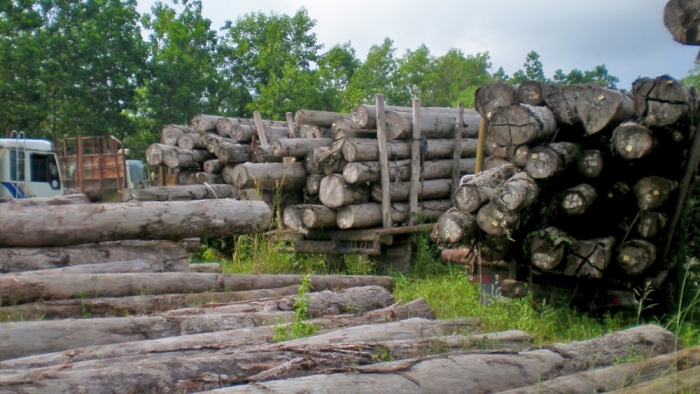 Sofi Mardiah/CIFOR
These illegal logs were seized, while in transit, and are impounded at district police offices, Riau, Sumatra, Indonesia.

A perennial problem is that the environmental agencies tasked with handling environmental crime lack the capacity or jurisdiction to stop it, while law enforcement agencies fail to prioritize it. But as the financial incentives of these crimes soar - a rhino horn can fetch $250,000, for example, and a single fishing trawler expedition can bring in $1 million worth of fish - so do the stakes.

There is evidence that heavy weaponry, such as rocket mortars and semi-automatic weapons, as well as helicopters, are being used by poachers, says investigative journalist Julian Rademeyer, whose book, Killing for Profit, exposes the illicit rhino horn trade in South Africa.

Frequently, top players like alleged kingpin Vixay Keosavang, who is dubbed “the Pablo Escobar of wildlife trafficking” and is said to operate with impunity in his home country of Laos, have links to government officials and other powerful elites.

And no amount of policing can eliminate the fact that environmental crimes are widely seen as a passport out of poverty. Rademeyer, who presented his findings at the conference, found that young men from destitute villages in Mozambique who entered the Kruger National Park to poach rhinos were regarded as heroes in their communities because of the money they brought home.

“Many communities on the Mozambican side of the Kruger Park don’t benefit from its conservation efforts. They face a stark choice: go to Johannesburg illegally and try to find work or poach rhino horn, for which they can get anywhere from $200 to $2,000 per horn,” he said. Without alternative choices, “there will be a constant line of ready recruits to occupy middle positions in these trafficking networks”.

Rademeyer said the Global Initiative could facilitate faster action through information sharing: “These syndicates move and adapt very quickly. The only way to stop them is to move quickly, too.”

Signing endless memoranda of understanding does not speed up the bureaucratic and diplomatic delays in dealing with transnational environmental crime. Unlike the murky and rapidly evolving world of cybercrime, environmental crime is “a more conventional commodity trade. There are no excuses for why we can’t deal with it,” says Rademeyer.

Steven Trent, director of Environmental Justice Foundation (EFJ), agrees. His organization monitors the effects of illegal fishing on people’s livelihoods in some of the poorest countries in West Africa, including Liberia and Sierra Leone. EJF has also exposed how people are being trafficked on these illegal fishing vessels, either to fish as unpaid labourers or for the sex trade in Asia. Very often, the culprits are companies that “knowingly or sometimes unwittingly” fish illegally and send their products to wealthy countries.

Some solutions to combatting environmental crimes need not be high-tech or complex, he argues. A start would be for every fishing vessel to have a mandatory license number. “When it comes to organized crime, people tend to complicate things, but sometimes there are basic solutions which could bring quick dividends,” he says. “Transparency and traceability are some of the best and simplest tools to combat corruption.”

“Grey” areas such as industrial-scale logging, where the law is often unclear or unevenly applied, are also robbing people of their livelihoods and habitats. Research conducted by Global Witness in Liberia and Cambodia reveals that huge logging concessions are being given out in these countries with “no recourse to the people living there”, says the organization’s director, Gavin Hayman, who argues that countries need to share more information about their enforcement strategies.

As much as one quarter of Liberia’s land area has been given over to logging, Global Witness research reveals. In some cases, communities have been chased off their lands and stripped of their livelihoods. In Cambodia, activists resisting loggers have been killed.

It is imperative for players to get out in the field and find out what local communities actually want, Hayman says. Otherwise, these vulnerable populations can and will fall victim to environmental crime.