Manal Tayyar fled to Lebanon after fighting erupted in her neighbourhood of Tadamun, on the outskirts of the Syrian capital Damascus last July. Neighbours tended to an injured person in her apartment; she left it stained with blood.

She followed her husband, who had been working in Lebanon before the Syrian crisis began, to live in the southern coastal city of Tyre in a room with a leaking ceiling, where the water and electricity are cut for days at a time. She sold her gold earrings to pay rent to an unsympathetic landlord, and then welcomed her mother, sisters, nieces, nephews and brother-in-law in the same room when they fled a few months later.

“And our whole family will follow us,” her mother Khidra Hamad told IRIN. “No one will stay in Syria under the bombs.”

Aid workers are yet to fully understand what is driving people south, given the sectarian sensitivities in a polarized Lebanon, but reckon it could be one of a few things:

Like Tayyar’s husband, there were many Syrian migrants working in Lebanon before the war who have since brought their families. Others estimate that the poor towns and villages of the north have reached their absorption capacity, and that refugees may believe they have more chances of finding work in the south.

In addition, Lebanon’s south - for decades the scene of war and occupation - is now one of the safer parts of the country, so far shielded from the problems that have engulfed places like the northern border city of Tripoli or even the capital Beirut, where a spillover of the Syrian conflict has led to fatal clashes and kidnappings between supporters and opponents of the Syrian government.

Some southerners are concerned, however.

On 23 January, the mayor of Tyre called a meeting with aid workers to discuss the growing needs.

“The [Syrian refugees] are increasing day by day,” Hassan Dbouk told IRIN after the meeting. “We are very worried about the future problems that may result by their presence here - at all levels: economic, social, security.”

"The problem between sects in Lebanon is a political fight; not a social fight. Nobody asks the Syrian refugees if they are Sunni or Shia, with or against the Syrian government" – Hassan Dbouk, Mayor of Tyre

In the past two months, he said, Tyre has seen an increase in commercial sex work, petty theft, children begging and even the disappearance of laundry from clotheslines. He said the timing of the increase suggested Syrians were involved, but there was no direct evidence of the link.

He also referred to increased job competition in an area with already high levels of unemployment; and the public health implications of overcrowding.

Unlike in the northern district of Akkar and the eastern Beka’a Valley, where a large-scale humanitarian operation has been under way since 2011, aid agencies only began ramping up aid in the south late last year.

The Social, Humanitarian, Economical Intervention for Local Development (SHEILD), a local NGO which has been tracking new arrivals, says there are at least 20,000 families in southern Lebanon who have not registered. (SHEILD transports refugees who want to register by bus to UNHCR’s nearest office in Sidon, a one-hour drive north of Tyre and even longer for those coming from rural villages.)

Many of the unregistered cross the border illegally - fearing any contact with Lebanese intelligence (with whom foreigners in southern Lebanon are obliged to register) - and live quietly in remote rural villages along the Israeli border where “the situation for them is very miserable,” according to Rima Khayat, SHEILD’s project manager.

Some Syrians in those areas live in abandoned schools, tents or - in the case of one family - in the engine room of an elevator shaft, Khayat said. At least 2,000 of the unregistered refugee families have not received any assistance, she said, though some international NGOs are hoping to reach them soon.

But locals say the aid in the south is limited: “Refugees in the south don’t have anything - there is little NGO presence here,” said Anis Slika, the mayor of the small southern village of Al-Fardis, north of the Syrian-Israeli border.

“Everyone is working in the north and in the Beka’a,” Khayat told IRIN. “We’re working with very limited resources.”

Even in the main city of Tyre, where most agencies have offices, assistance to some refugees has been slow.

Tayyar has been waiting two months for a registration meeting. Insufficient staffing has led to a backlog and UNHCR says the wait for registration at the Sidon office is three months on average. (It prioritizes registration for cases in need of urgent assistance; and several NGOs provide aid to those who are not yet registered).

Aid agencies recognize the increasing needs and are scaling up.

The World Food Programme (WFP) began distributions in December and the UNHCR is set to open a second southern office in Tyre in the coming weeks to speed up registration. (UNHCR’s national staffing levels have increased from around 60 at the start of the crisis to more than 250 today). The Lebanese civil society portal Daleel Madani advertises many vacancies for aid workers in the south.

While the limited aid has so far been justified by the much smaller number of refugees in the south, the stakes here may well be higher.

“In the south, you have a community that is mostly pro-Bashar,” said Sahar Atrache, an analyst with the International Crisis Group, referring to the Syrian president, who has been accused of heinous crimes against a mostly Sunni opposition.

A 9-month old baby from Rural Damascus, Syria, sits on the floor of a room where his family has sought refuge in Tyre, South Lebanon, next to his cousin, sleeping on the floor 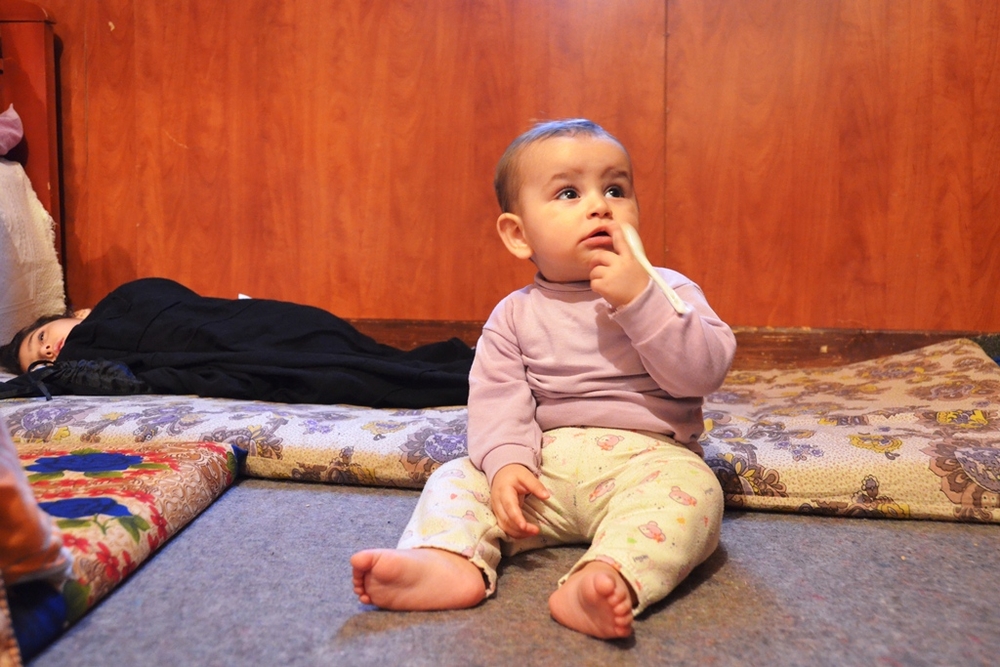 “Probably those [refugees] who go south are not as aligned with the opposition,” she told IRIN. “But some people [in southern Lebanon] are so extreme, saying things like ‘Let Bashar kill them all and finish with it,’ so this could cause problems.”

By all accounts, sect has not been an issue so far.

Tayyar’s family said they had not had any problems in this regard, and the mayor of Tyre is quick to point out that “nobody asks the Syrian refugees if they are Sunni or Shia, with or against the Syrian government… We believe that Syrians are from the same origin - we are [all] Arabs.

“The problem [between sects] in Lebanon is a political fight; not a social fight.”

Shia Lebanese have been welcoming Sunni refugees in the Beka’a Valley, for example, since the beginning of the crisis.

But there are potential trigger points.

Already in the north, where majority Sunni Lebanese are hosting Sunni “brothers”, resentment is beginning to build between the impoverished locals and their guests who are perceived to be receiving all the aid. Aid workers are increasingly stressing the need for donors to fund programmes for both Syrians and their host communities to avoid such tensions.

“The south is the most sensitive area,” Atrache said. “If there is an overload [of refugees] there, the resentment you saw in the north, you’ll see it also in the south. But then you have the political and sectarian problem; the problem will become much more acute.”

Avoiding a crisis on its territory may be one of the reasons Hezbollah has also assisted refugees, Atrache said. The group has made a point of publicly differentiating between its political positions and its humanitarian aid. But, Atrache said, the aid may also be a way for Hezbollah to “control the refugees”, amid rising fears.

“There is fear that the number of Syrians will increase and they will end up staying forever,” said Abdel Majid Saleh, a member of parliament from Tyre with the Amal Movement, a Shia party belonging to the ruling March 8 alliance. “We took in the Palestinians on the basis that it would be 10 or 15 days, one month, two months; 64 years later, the Palestinians are only increasing.

“The fear is that Lebanon’s demographics will be shaken,” Saleh told IRIN, referring specifically to Christians becoming more of a minority, and a possible influx of Sunni extremists or Syrian opposition figures with a security-related agenda in Lebanon. “It is our right to be cautious.”