Editor’s note: This article was written by a journalist in Eswatini whose name is being withheld due to security concerns.
Listen to this article:
MBABANE, Eswatini

Three months after Eswatini was convulsed by pro-democracy protests and the worst rioting in its history, King Mswati III’s hold on power is as absolute as ever, his defiance of demands for constitutional reform just as resolute.

The protests, which began in June and degenerated into three weeks of frustration-fueled looting and arson across the country, have demonstrated just how entrenched the monarchy is – exposing the vulnerability of the opposition rather than the royal establishment.

The government’s response to the unrest was to send troops into the streets, who together with the police, officially killed 27 people, although rights groups say the count could be closer to 100. There have been few calls for accountability for what Amnesty International described as a “full-frontal assault” on human rights.

Two maverick MPs, Mthandeni Dube and Mduduzi Mabuza, who sparked the youth-led demonstrations demanding limits to monarchical power, were arrested on terrorism charges, and last week had their bail applications turned down by a judge appointed by Mswati.

“Life in Eswatini is without basic freedoms,” said a local aid worker, who asked not to be identified to avoid government reprisals. “There is no external force willing to change this. Internally, pro-democracy groups are oppressed. To survive in Eswatini [you] must accept this reality.” 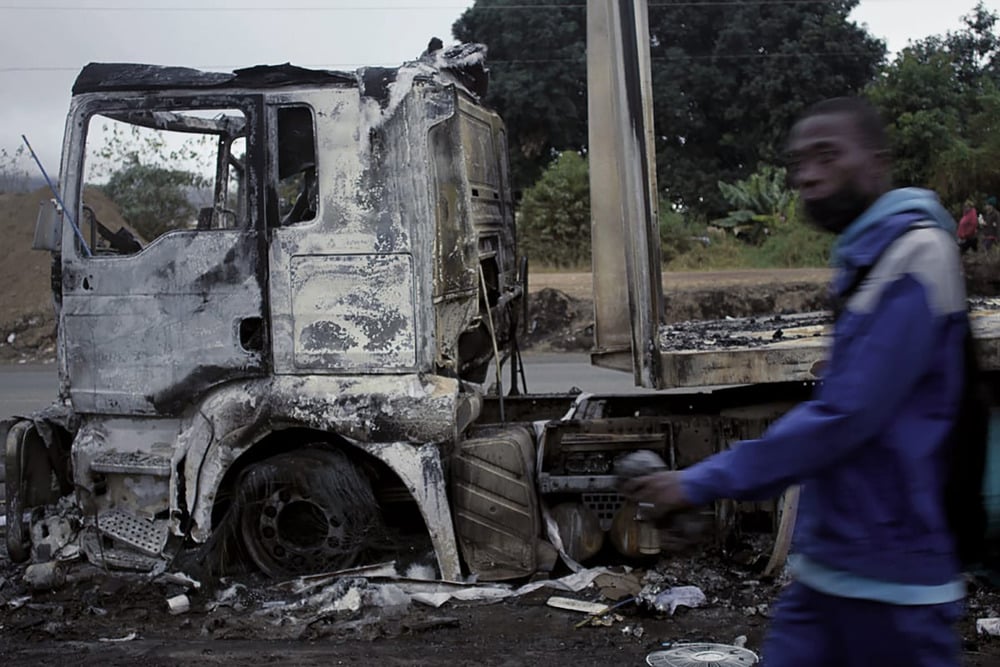 Alessandro Parodi/TNH
Three weeks of rioting in June and July left at least 27 people dead, and millions of dollars in damage to business – those linked to the royal family were a particular target.

Although protests have fizzled out, earlier this month the labour unions did try to reignite a spark of activism by blocking border crossings with their giant neighbour, South Africa. What was billed as a week of action, in conjunction with the Confederation of South African Trade Unions, lasted for only a few hours.

“The youth of Eswatini, we get it. We will never have equality,” said Edmond Hlope, who took part in the demonstrations in June and July. “We can never be head of government because we weren’t born ‘right’. We can do nothing to make our lives better.”

Eswatini is a feudal society, in which two-thirds of its 1.3 million people are subsistence farmers on communal land controlled by palace-appointed chiefs. Each year, a significant section of the population requires food aid provided by international agencies – ranging from 30 percent of citizens during good harvests, to 60 percent in drought years.

Youth unemployment is estimated at over 50 percent, and even graduates struggle to find white collar work in what is the worst performing economy in southern Africa.

“To us, democracy doesn’t mean we all get rich, and our problems are over,” explained Titus Mkhoshwa, another youth demonstrator. “Democracy means we have a chance. We can choose a government that responds to our needs. But the king has decided to keep everything for himself.” 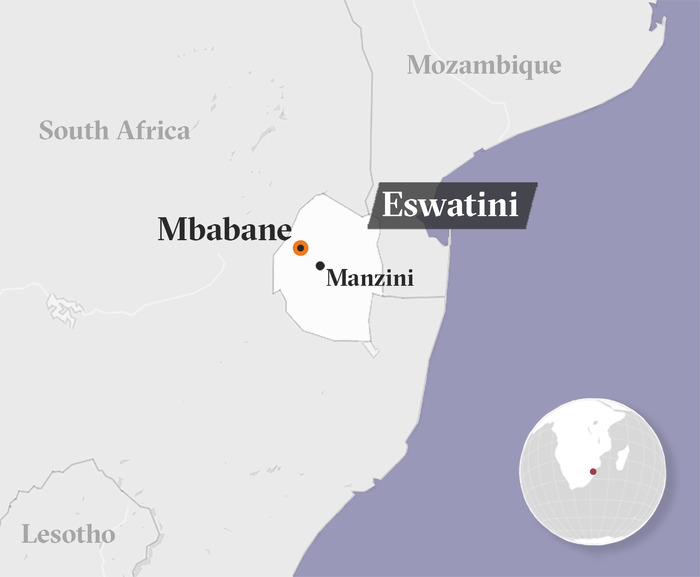 Political parties have been banned since 1972, the media is muzzled, and journalists have been detained and tortured. Even though he presides over an annual animist ceremony, where his ancestors are invoked to reaffirm his power, Mswati enjoys the support of the powerful Council of Eswatini Churches.

The king has the right to appoint all his ministers, as well as heads of government agencies and the judges. He has the loyalty of the uniformed services, controls the selection process for MPs, and through their extensive business interests, the royal family owns a large chunk of the country.

Mswati’s powers are enshrined in a constitution, written by one of his brothers, Prince David Dlamini, that places him above the law. “The laws apply to commoners but not royalty,” said Samuel Khoza, a member of the largest political opposition group, the People’s United Democratic Movement, which the government has labelled a terrorist organisation.

At Mswati’s coronation in 1986, hopes were high that the young king would be a reformer. But it's the monarchical system that needs to change, not the individual, an Eswatini political scientist – who asked not to be named – told The New Humanitarian.

“When Mswati is gone, he’ll be replaced by the royal family with Africa’s next ‘last absolute monarch’,” the analyst explained. “If anyone is going to remove Mswati, it will be his relatives, and they’ll just put another one of their own in charge to do the family’s bidding.”

Eswatini promotes itself as a bastion of “African culture” and condemns pro-democracy activists as “un-Swazi”. In the absence of polling, it’s not possible to gauge the extent of the royalty’s popularity, yet the scale of the nationwide unrest – which involved both urban and usually conservative rural areas – suggests there is a solid body of support for reform.

As it has done in the past during labour-led agitation, the international community responded to this year’s protests by urging Mswati to engage with pro-democracy groups, but there were no hard demands or timelines.

The Southern African Development Community, the regional body, sent a delegation to meet with the government to discuss the protests, but ignored political activists. In its summit in August, the heads of state failed to even mention Eswatini. 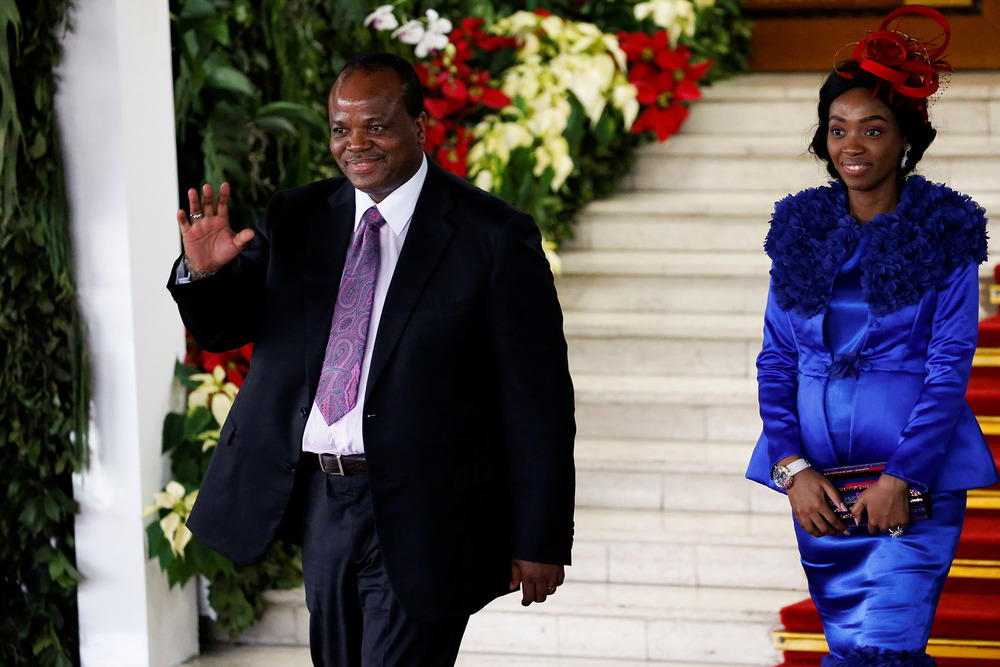 Willy Kurniawan/REUTERS
Eswatini’s King Mswati III and his wife, Siphelele Mashwama, greet journalists on a diplomatic trip to Indonesia in 2019.

South Africa, which provides 80 percent of Eswatini’s imports and all its petroleum products, was conspicuous by its silence, even though as early as July, Mswati made clear there would be no dialogue – and instead appointed another of his brothers as prime minister.

At a public fundraising event this month in which private sector firms pledged funds to rebuild businesses destroyed during the unrest, Mswati scolded his subjects for trying to achieve reforms “by burning things”. He then declared there was no need for political change because “we are democratic. We love democracy”.

“The door to dialogue has firmly and unequivocally been shut in the face of the pro-democracy proponents,” wrote Vusi Sibisi, the principal political writer for the Times of Eswatini. “Ostensibly because the subject matter is irrelevant… because Eswatini is already democratic.”

Mswati was in a celebratory mood at the fundraising event. He reflected on the unrest and linked its ending to the coming of the rains – a divine sign that Eswatini had been blessed. He then called on everyone to sing “Hallelujah”.

The following day, another of Mswati’s brothers, Prince Simelane, the minister of housing and development, issued a directive to all municipalities to erect billboards proclaiming “Hallelujah!” at the entrance and exit of towns.

Ruling by decree is not unusual when the king is sovereign. In 2018, to celebrate his 50th birthday, Mswati unilaterally renamed the country from Swaziland to Eswatini. All businesses, organisations and government entities were expected to reflect the new branding.

But the hallelujah billboards are going up, complete with the Eswatini coat of arms, and the motto: “In God we trust”.