0:00 0:00
Editor’s note: This article was written by a journalist in Eswatini whose name is being withheld due to security concerns.
MANZINI, Eswatini

The pro-democracy demonstrations and deadly violence that erupted in Eswatini last month and continued into July has deepened the southern African nation’s economic and humanitarian crisis, but without forcing any reform of the royal establishment.

The people of Eswatini have never lived under a democratic system of government. King Mswati III, Africa’s last absolute monarch, presides over the worst performing economy in the region. Employment is scarce, poverty is deep, and the unrest brought aid work to a standstill.

Despite rare international attention being paid to the country after weeks of unprecedented protests, Eswatini’s 1.3 million people will remain as they are for the foreseeable future – subjects of a king rather than co-equal citizens of a country with democratic rights.

Eswatini is poor and donor-dependent. Each year, a significant number of its citizens require food assistance provided by international agencies – ranging from 30 percent of the population during years of good harvests to 60 percent in drought years.

“Donor funding was already problematic [as a result of COVID-19],” said Nelisiwe Dlamini, director of a neighbourhood care point – where orphans and vulnerable children are fed daily – in a poor suburb of Eswatini’s commercial hub, Manzini. “Now,” he added, “we are faced not only with maintaining what little we were able to provide, but rebuilding our destroyed infrastructure.”

Malnutrition is widespread. Two thirds of the population are chronically poor – many of them subsistence farmers living on communal land under royal-appointed chiefs – and a third of all children under the age of five suffer from stunting. Donor programmes fill the social service gaps left by the government.

But the treasury still finds the money to fund royal initiatives: a $2 billion International Convention Centre and five-star hotel now under construction in the upscale community of Ezulwini; the purchase of an Airbus A340-300 passenger plane for King Mswati; and the extravagant lifestyle of the rest of the royal Dlamini family.

The pro-democracy movement has struggled to force change in a political and cultural system dominated by the royal establishment.

Political activists are demanding an end to the ban on opposition parties introduced in 1973, and the overturning of a constitution that gives King Mswati the right to appoint all his ministers – including the prime minister – as well as heads of government agencies and the judges.

The EBC enforces the ban against organised political parties contesting elections, as decreed by King Mswati’s father in 1973. The country’s largest political opposition group, PUDEMO, was banned as a terrorist organisation in 2011 when some alleged members were implicated in a bombing attempt.

The king appoints 20 members of the 30-member the Senate, the upper house, with MPs electing 10 others from their ranks, often from the royal appointees.

“The government we are advocating has the power to take decisions independently,” said Mduduzi Mabuza, a member of parliament who initiated the latest push for a constitutional monarchy, with the king assuming a ceremonial role as head of state.

Two converging elements led to the current wave of protest and violence. In May, youth took to the streets accusing the police of involvement in the death of a student – Thabani Nkomonye – the latest in a series of alleged extrajudicial killings.

“The whole system is set up to make us silent.”

Then, in June, pro-democracy groups began marches on the homes of parliamentarians with petitions seeking political change. When the police intervened, violence erupted, and acting Prime Minister Themba Masuku banned all marches.

A turn to violence

An ensuing call to action by political activists via social media was seized upon by criminal elements. Unemployment runs high, and mobs of jobless people looted stores, telling journalists they were hungry and hopeless. They set up roadblocks in poor suburbs, charging motorists for access.

The government responded with a dusk-to-dawn curfew, the blocking of the internet, and the deployment of the military. While police shot tear gas, soldiers used live ammunition against civilians. The government admits to 27 deaths attributed to soldiers, but pro-democracy groups claim the number killed is higher. 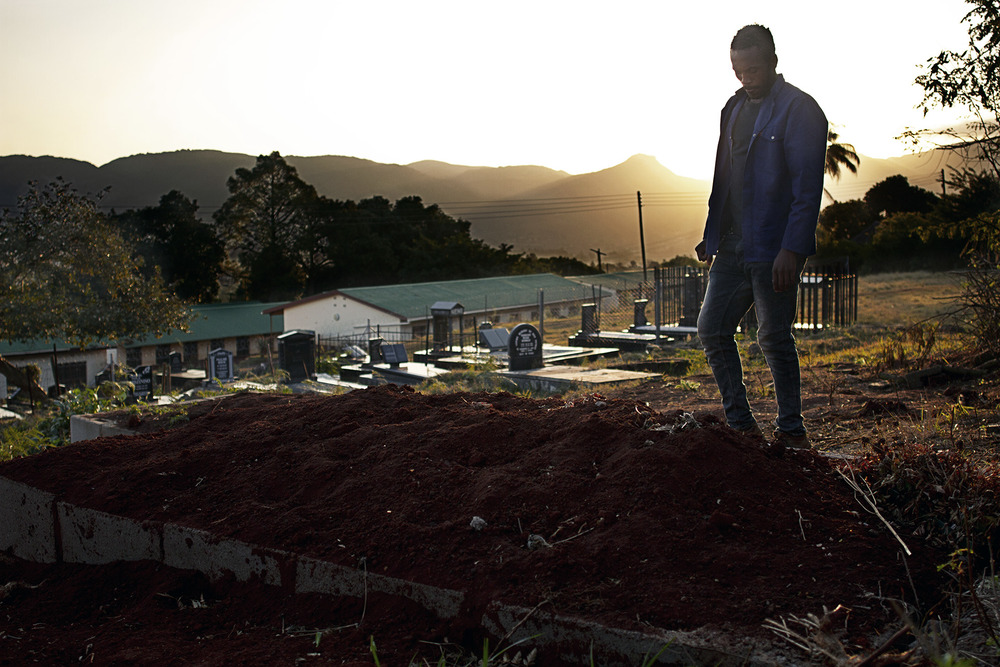 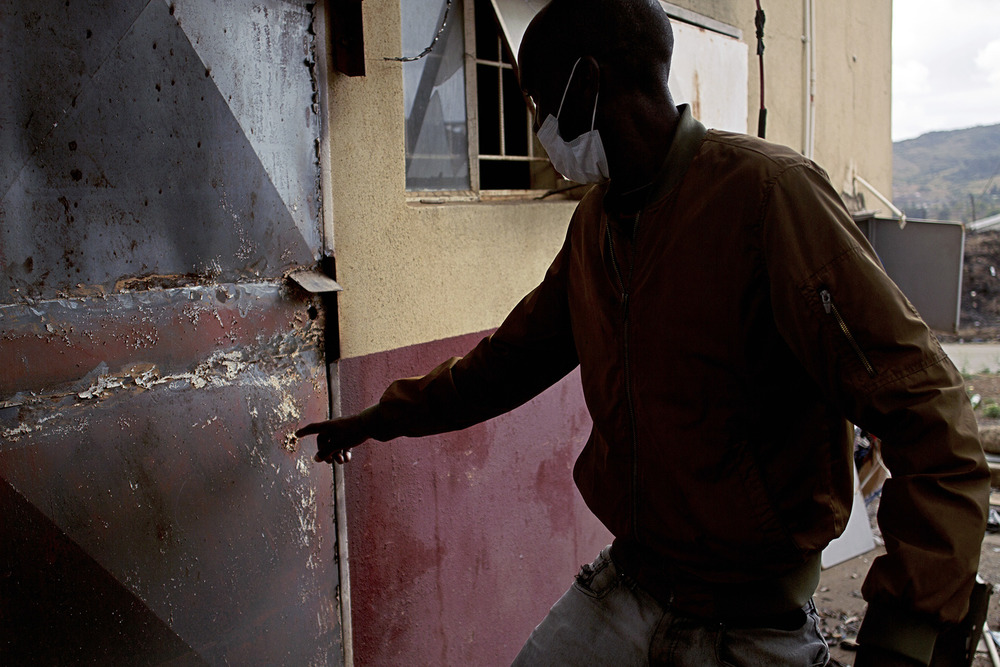 A student pays homage to the grave of colleague Thabani Nkomonye, allegedly shot by the police on 14 May. Bullet holes and blood stains mark the streets of Manzini after security forces opened fire on protesters. (Alessandro Parodi/TNH)

The damage to businesses has been immense. Although firms associated with the royal family were targeted, “all the shops [in the poorest suburbs] have been burned or gutted”, said Wandile Simelane, a road freight company manager in Matsapha – the scene of several arson attacks.

The looting and crackdown also froze the work of NGOs delivering humanitarian assistance – including the care point in Manzini, where 1,200 vulnerable children receive their only certain nutritious meal a day.

Looters broke in and “stole the refrigerator, the stove, even the store of toilet paper”, said Dlamini, the care point director. “For several days, there were no shops open for new supplies, and no way to feed our kids.”

After the protests began, the country was effectively shut down. Public transportation stopped, and communication systems were slowed or blocked.

The internet blackout deepened Eswatini’s food crisis. For most of the week when the disturbances were most intense, a kilometres-long queue of trucks was reported at the main border post with South Africa at Oshoek – many of them supplying the supermarket chains.

Drivers were fearful about entering the country, but this became a moot point due to the inability of the Eswatini Revenue Authority to clear goods because the process was handled on-line. Food deliveries were restored at the end of the first week of July, but petrol shortages persisted through the second week.

“We are doing all we can to get the border posts functioning and resume the normal flow of traffic,” said Musa Maseko, head of trade and commerce for Business Eswatini, the chamber of commerce.

The government has announced it will open a “national dialogue” on political reform, but few hold out any hope for real change. Opposition figures said the palace has played this card since labour groups initiated the first pro-democracy political campaign in 1996.

“Another ‘dialogue’ will take place – going on forever and costing the taxpayers a large amount of money. But actual change will not occur,” said a member of the banned People’s United Democratic Movement (PUDEMO), the country’s largest opposition group, who asked not to be named, fearing arrest.

“The government has no desire to give up its power,” said the activist. “The royal family would not think of giving up its privileges, or the keys to the treasury.”