The experience of Afghan asylum seekers in France differs considerably depending on how they arrive in the country, reflecting a tension across Europe between rhetoric about the need to protect people from Taliban persecution and the reality of an erosion of access to asylum.

Around 2,600 Afghans who were airlifted from Kabul by France in the weeks after the Taliban took control of the capital on 14 August – as well as several hundred others quietly evacuated in recent months – have been given preferential access to housing and are having their asylum claims fast-tracked. Meanwhile, those who make the long and dangerous trek overland face policies that reduce the likelihood of them receiving protection, and often end up homeless once they arrive.

In the first 10 months of this year, France received around 77,500 first-time asylum applications – the second most in the EU behind Germany. Around 11,000 of those were from Afghans, the most of any nationality.

Since the international evacuation effort from Kabul ended at the end of August, legal routes out of Afghanistan are minimal. Canada and the UK have said they will resettle 40,000 and 20,000 vulnerable Afghans, respectively – although the UK’s programme is off to a slow start. On 9 December, the EU announced member states had pledged to take in just over 38,000 Afghans. Of those, Germany said it will resettle 25,000 while France will take in 2,500.

Meanwhile, Afghanistan is now in the midst of an economic collapse that is pushing around half its population of around 39 million to the brink of emergency levels of hunger as Western donor countries have frozen funds and imposed sanctions.

Every day, thousands fleeing the fallout of multiple humanitarian crises in the country are reportedly crossing into neighbouring Iran – which already hosts more than three million Afghans and has deported a record number back to Afghanistan this year. Most who cross the border plan to find work, but some want to continue on to Europe.

The prospect of an exodus from Afghanistan has alarmed European leaders, who fear a potential repeat of the 2015 migration crisis, when around one million predominantly Syrian refugees entered the EU in the course of a year. As a result, public statements have focused on a desire to keep Afghans fleeing the country in the region.

In a speech two days after the Taliban entered Kabul, as scenes of desperate Afghans clinging to departing US military planes were being broadcast around the world, President Emmanuel Macron said France had a “duty to protect those who are most under threat in Afghanistan”, but emphasised: “We must anticipate and protect ourselves against significant irregular migratory flows.” 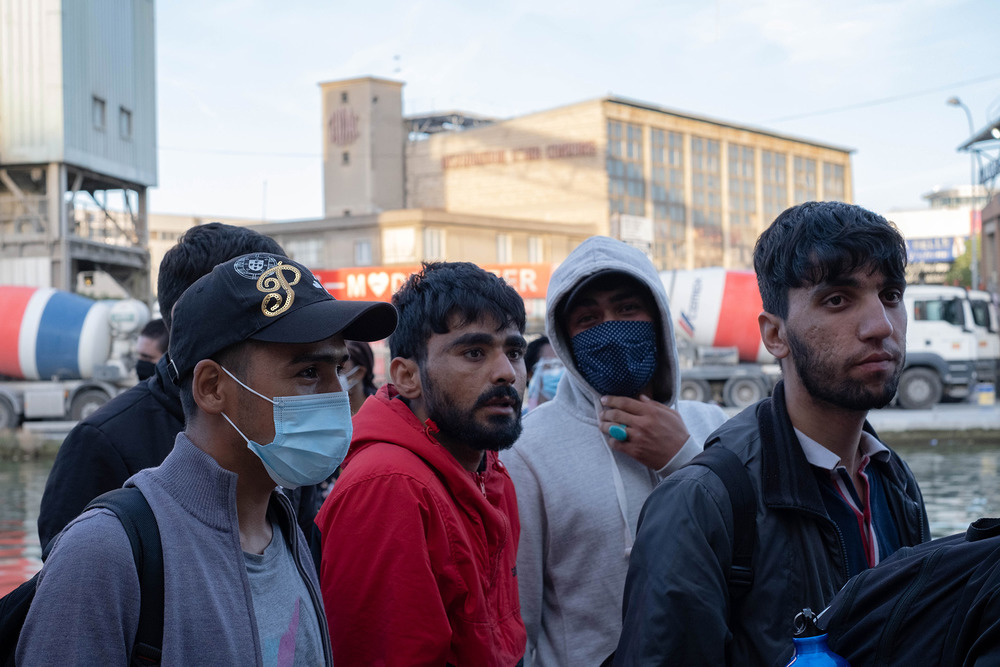 Paloma Laudet/TNH
Afghan asylum seekers during an eviction from a makeshift camp on a canal in Aubervilliers, near Paris, in July 2020.

Since then, immigration has become a hot button issue in the campaign for the upcoming April 2022 French presidential election, with candidates across the political spectrum staking out hardline positions.

“Since the start of the summer, the focus of European countries was placed first and foremost on containing refugees within the region and stopping any possible arrivals to Europe, rather than making strong commitments to open pathways to safety for Afghans at risk,” Olivia Sundberg Diez, a Brussels-based policy and advocacy adviser for the International Rescue Committee, told The New Humanitarian. “The worsening humanitarian situation in Afghanistan coincides with mounting threats to the right to asylum in Europe, including for Afghan nationals in need of protection.”

Abdul, a 34-year-old Afghan whose name has been changed to protect his identity, is one of the people who was evacuated from Kabul to France in August.

After the Taliban returned to power, “the situation was very difficult for me,” Abdul told The New Humanitarian. “I was working for the government and for foreign companies – French, British, US. I could not even leave my house to go to a shop or to get food.”

His boss at a French consulting company helped get Abdul’s name on a list for an evacuation flight on 25 August. Fearing retribution from the Taliban, he decided to risk the 12-hour journey to Kabul from his home in Helmand province. His wife – who had also worked for the French consulting company, but didn’t have a passport – and their three young children stayed behind, hoping to be able to follow later.

After reaching France, Abdul was provided housing and had his first asylum interview on 15 October. He brought 65 pages of documents detailing the risks he faced in Afghanistan, his educational background, and the work he had done for French and other Western countries. Less than two weeks later, his application was approved and he was granted refugee status, which includes a 10-year renewable visa, the right to work, and the possibility of becoming a French citizen.

“Everything is going well. I am so happy to be in France,” he said.

The situation could not be more different for Ali, an Afghan asylum seeker in his mid-30s whose name has also been changed to protect his identity. Ali arrived in Paris after crossing Iran, Turkey, Greece, the Balkans, and Italy on foot – a journey that is replete with dangers and guards at various borders who regularly push people back and subject them to abuse.

On a foggy night in early November, a couple of days after he arrived in France, Ali was getting ready to sleep in a makeshift camp under a bridge in a neighbourhood of northeast Paris known for concert venues, outdoor cinemas, and craft breweries.

Despite a legal requirement that the state provide housing during the asylum process, there is a chronic shortage of accommodation for applicants that leaves many – particularly young men – with no option but to live on the streets in makeshift encampments.

Read more → What’s behind the housing crisis for asylum seekers in France?

Volunteer groups had set up rows of tents in the encampment where Ali was sleeping. Night-time temperatures had dropped recently, and Ali and other Afghans sleeping there didn’t have adequate clothing.

The night before, French police had raided the camp, tear gassing people and rendering some of the tents unusable. Police harassment of homeless asylum seekers and migrants and the dismantling of makeshift camps are regular occurrences in France, according to human rights groups.

Despite sleeping on the street, “I want to stay in France,” Ali said, sipping chai distributed by humanitarian volunteers.

He had a text message on his phone confirming the date of the appointment to submit his asylum documents and had marked the location with a heart on Google Maps – it was an hour and a half away by train. “They keep changing it,” he said, referring to the time and location of the appointment.

The process Abdul sped through in two months will likely take Ali a year – if not longer – to complete. Even then, it’s far from guaranteed he will be granted protection.

In the past, France offered two types of protection to Afghans: refugee status for people who face individual persecution, according to the definition in the 1951 Refugee Convention; and subsidiary protection, given to people coming from countries facing “indiscriminate violence resulting from a situation of internal or international armed conflict”.

Last year, over 80 percent of Afghans who applied for asylum in France received one of these two kinds of protected status. Of those, 90 percent were given subsidiary protection. But in November 2020, France’s National Court of Asylum (CNDA) ended its policy of uniformly giving subsidiary protection to Afghans who did not qualify for refugee protection, except in special cases. Despite the Taliban’s return to power, the CNDA has stuck by the decision.

In an internal memo from the end of August this year obtained by the French news outlet Mediapart, the head of research and documentation at the CNDA wrote: “It is possible to conclude that the armed conflict between the Taliban and the government has ended. Consequently, the request to be granted subsidiary protection… can only be excluded.”

“The war is not over. The Taliban will continue to persecute people who they have persecuted before.”

Elodie Journeau, a migration and asylum lawyer based in Paris, is concerned that the CNDA’s stance is premature and will result in people who need protection having their claims denied.

“The war is not over. The Taliban will continue to persecute people who they have persecuted before. The French response is completely unadapted to the situation,” Journeau told The New Humanitarian. “Before making decisions, or rejecting people, we need to wait and see what happens.”

The political independence of the CNDA has also been called into question recently, with judges reporting they have been “pressured” by their superiors to rule against granting people protections, or to delay decisions. There have also been reports of cases being decided en masse instead of on an individual basis, which is how asylum claims are legally supposed to be evaluated.

Even people who were evacuated and have had their claims fast-tracked, like Abdul, aren’t immune from all of the difficulties in the French asylum system. Abdul is trying to find a job in Paris and waiting to be reunited with his wife and children, who are still in Afghanistan. But due to the COVID-19 pandemic and France’s slow-moving immigration bureaucracy, there’s a backlog of more than 3,500 family reunification cases for Afghans who have status in France. The average wait time for cases to be resolved is three and a half years.

“I have a request for the French government to get my family out as soon as possible,” Abdul said. “I cannot support them from here because I am not working yet, and my wife can no longer work there. My big request is to bring my wife and three small sons here. I will never go back to Afghanistan.”