On the night of 27 June, at least 61 people died in a shipwreck on a lake in Van, a Turkish province bordering Iran. The victims were asylum seekers, mostly from Afghanistan, and the wreck shed light on a dangerous and often overlooked migration route used by people trying to move west from the border to major cities, such as Ankara and Istanbul, or further beyond to Europe.

Turkey hosts the largest refugee population in the world, around four million people. A significant majority – 3.6 million – are Syrians. Afghans are the second largest group, but since 2018 they have been arriving irregularly in Turkey and then departing for Greece in larger numbers than any other nationality.

During that time, Turkey’s policies towards people fleeing conflict, especially Afghans, have hardened. As the number of Afghans crossing the border from Iran increased, Turkey cut back on protections and accelerated efforts to apprehend and deport those entering irregularly. In 2019, the Turkish government deported nearly 23,000 Afghans from the country, according to the UN’s emergency aid coordination body, OCHA.

Early on, travel restrictions put in place due to the coronavirus appeared to reduce the number of people entering Turkey irregularly. But seven months on, the pandemic is worsening the problems that push people to migrate. The economic crisis in Iran has only intensified, and the head of the UN’s migration agency, IOM, in Afghanistan has warned that COVID-19-induced lockdowns have “amplified the effects of the conflict”.

Like the victims of the wreck, most people travelling on the clandestine route through Van are from Afghanistan – others are mainly from Iran, Pakistan, and Bangladesh. The lake, 50 kilometres from the border, straddles two provinces – Van and Bitlis – and offers a way for asylum seekers and migrants to avoid police and gendarmerie checkpoints set up along roads heading west.

Due to its 200-kilometre border with Iran, Van has long been a hub for smuggling sugar, tea, and petrol, according to Mahmut Kaçan, a lawyer with the Migration and Asylum Commission at the Van Bar Association. In recent years, a people smuggling industry has also grown up to cater to the needs of people crossing the border and trying to move deeper into Turkey. Lake Van – so large that locals simply call it ‘the sea’ – plays an important role.

“There have been a lot of refugees on ‘the sea’ in the last 10 years,” Mustafa Abalı, the elected leader of Çitören, a village close to where many of the boats set out across the lake, told The New Humanitarian, adding that the numbers have increased in the past two to three years.

When the shipwreck happened, on 27 June, the picture that initially emerged was murky: Rumours circulated, but the local gendarmerie blocked lawyers and journalists from reaching the lake’s shore.

After two days, the Van governorship announced that security forces had found a missing boat captain alive and launched a search mission. It took weeks, but search teams eventually recovered 56 bodies from the wreck, which had come to rest more than 100 metres below the lake’s surface.

Abalı described the scene on the beach where the rescue teams were working. “I was crying; everyone was crying; even the soldiers were crying… We were all asking, ‘how could this happen?’” he said. 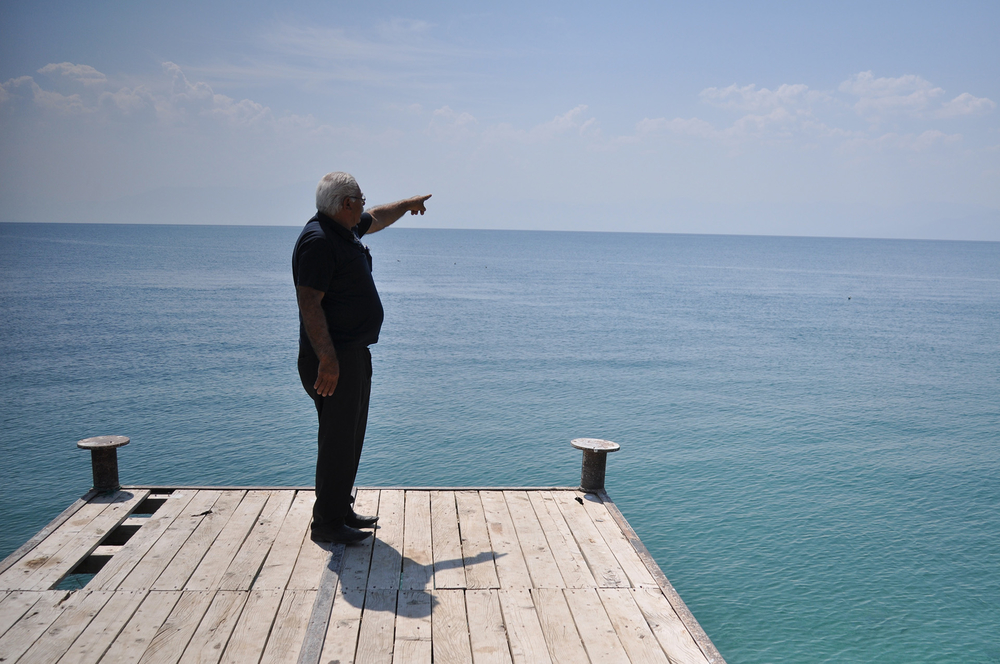 Sami Kent/TNH
Lake Van is so large that those around it call it "the sea". Mustafa Abalı, the elected leader of Çitören, a village near Van, points to the scene of the June shipwreck in which more than 60 people died.

The testimony the boat captain provided to police after he was detained on smuggling charges gave a few clues. On board with his cousin and 70 to 80 asylum seekers, he recalled how they left that night at around 9pm from Van city to cross the lake. He said he pushed out into the open water, with the lights off to avoid attention, but the waves were large and the boat capsized. The captain, the lone known survivor, said he managed to swim ashore.

The shipwreck was the deadliest on Lake Van, but not the first. In December 2019, seven asylum seekers died in a wreck on the lake. After that incident, authorities only issued one arrest warrant, which expired after 27 days, and the suspected smuggler was released.

Kaçan, from the Van Bar Association, said the handling of that case pointed to a “policy of impunity” that allows the smuggling industry to flourish in Van. “It’s not a risky job,” he said, referring to the chances of getting caught and the lack of punishment for those who are.

That said, the case against the captain from the 27 June shipwreck is ongoing, and at least eight other people have now been detained in connection with the incident, according to Kaçan.

Read more: ‘My only fear was being sent back’

Muhammed, who preferred to give only his first name, is one of the minority of asylum seekers who ended up staying in Van. A university graduate from Kabul with a law degree, he summed up the situation in his home country succinctly: “There’s no work; there’s war.”

After witnessing a bomb blast that killed around 80 people in his neighbourhood in 2016, he decided to leave. “The bomb was 100, 200 metres away from me,” he said. “There was blood everywhere.”

Muhammed first moved to Iran, but struggled to make ends meet in an economy crippled by international sanctions. He said he was often harassed by Iranian police because he was Afghan. In 2019, he decided to cross the border to Turkey. It took him six months to save enough money to pay a smuggler, and then 40 days to travel from Tehran to Van, including a 10-day stint in detention after being caught by Turkish police near the border.

Muhammed hadn’t originally planned to stay in Van, but he ended up applying for international protection in the province. He now holds a temporary residency permit. “I feel very grateful that Turkey accepted me,” he said – a Turkish flag hanging behind him on his bedroom wall.

Muhammed endured a gruelling journey to cross the border from Iran into Turkey. He was squeezed into lorries, barely fed, and then had to walk for 12 hours to cross the mountains on the frontier, only to be detained on the other side. He knew the dangers he was facing – the same ones faced by others who died trying to cross the lake or the mountain passes.

But Muhammed told TNH the risk was worth it. “My only fear was being sent back,” he said.

A report from the Van Bar Association alleges that this impunity extends to the Iran-Turkey border, but according to Kaçan it‘s unlikely smugglers bringing people into Turkey – sometimes in groups of up to 100 or 200 people – would pass the frontier entirely undetected. Turkey is building a wall along much of it, and there’s a heavy military and surveillance presence in the area. “Maybe not all of them, but some of the officers are cooperating with the smugglers,” Kaçan said. “Maybe [the smugglers] bribe them. That’s a possibility.”

After a lull during the initial round of pandemic-related travel restrictions in March and April, migration across the Iran-Turkey border began to pick up again in May, according to people TNH spoke to in Van. Smugglers are even advertising their services on Instagram – a sign of the relative freedom with which they operate.

TNH contacted a Turkish-speaking Iranian smuggler through the social media platform. The smuggler said he was based in the western Iranian city of Urmia, about 40 kilometres from the Turkish border, and gave his name as Haji Qudrat. On a video call, Haji Qudrat counted money as he spoke. “Everyone knows us,” he said. “There’s no problem with the police.” He turned the phone to show a room full of 20 to 30 people. “They’re all Afghans. Tonight they’re all going to Van,” he added.

TNH asked both the Turkish interior ministry and the Van governorship for comment on the allegations of official cooperation with people smugglers and possible bribery, but neither had responded by the time of publication.

A cemetery on a hill

While crossing into Turkey from Iran doesn’t seem too problematic, the situation for asylum seekers in Van is not so relaxed.

The region is the second poorest of Turkey’s 81 provinces – many people who enter irregularly want to head west to Turkey’s comparatively wealthier cities to search for informal employment, reunite with family members, or try to cross into Greece and seek protection in Europe, according to a recent report by the Mixed Migration Centre.

Under Turkey’s system for international protection, non-Europeans fleeing war or persecution are supposed to get a temporary residency permit and access to certain services, such as medical care. But they are also registered to a particular city or town and are required to check in at the immigration office once a week. If they want to travel outside the province where they are registered, people with international protection have to first apply for permission from authorities. Even if it is granted, they are required to return within 30 days.

Since the uptick in border crossings in 2018, it has become more difficult for Afghans to access international protection in Turkey, and Turkish authorities have occasionally apprehended and deported large numbers of Afghans – especially single men – without allowing them to apply for protection in the first place.

As a result, many prefer to avoid contact with Turkish authorities altogether, using smugglers to carry on their journeys. In September, news channels aired footage of a minibus that had been stopped in the province. It had the capacity to hold 14 passengers, but there were 65 people inside, trying to head west.

Buses carrying asylum seekers on Van’s windy, mountainous roads frequently crash, and every spring, when the snow melts, villagers find the corpses of those who tried to walk the mountain pass in the winter. Their bodies are buried in a cemetery with the scores who have drowned in Lake Van.

The cemetery is on a hill in Van, the city, and it is full of the graves of asylum seekers who died somewhere along the way. The graves are marked by slabs, and most of the people are unidentified. Some of the slabs simply read “Afghan” or “Pakistan”. Others are only marked with the date the person died or their body was found. The cemetery currently has around 200 graves, but it has space for many more.