Despite authorities in France being legally required to provide housing to asylum seekers, Hussain spent over a year sleeping rough in the streets of Paris after he submitted his application for international protection.

There was a small park surrounded by a stone wall in the northeast of the city where he could sleep without being disturbed by the police, and the underside of a balcony near Gare de l’Est, one of the main train stations, where he sought shelter, often with other asylum seekers and migrants close by. Sometimes, he slept in the middle of the Place de la République, the iconic square in the centre of the city.

Hussain, who asked to be identified by only his first name, was 19 at the time and had recently arrived in Europe. His family fled their home in Afghanistan to Iran when Hussain was young – his father had supported the Western-backed government, which made him a target of the Taliban. The family continued to face discrimination and violence in Iran, so, as a teenager, Hussain fled further, first to Pakistan, then Turkey, before crossing to Greece and finally France.

“When I arrived [in Paris], I had to sleep on the streets for a long time. It was so complicated. I was always sick,” Hussain told The New Humanitarian, referring to colds, flu, and malnutrition.

That was back in 2015. In the years since, the housing situation for asylum seekers in France has only gotten worse, according to rights advocates, despite promises by President Emmanuel Macron early in his term to make sure all were housed.

At the root of the issue is a chronic shortage of housing units for asylum seekers that advocates say is part of an intentional strategy by French authorities to try to dissuade people from seeking protection in the country.

The General Directorate of Foreigners in France – the office of the interior ministry in charge of immigration, asylum, integration policy, and naturalisation – declined to comment on this allegation when contacted by The New Humanitarian.

“There is a chronic under-budgeting, which means that the state will never have the resources to meet the demand [for housing],” said Christophe Pouly, head of Sciences Po Law School’s legal clinic on migration. “From official information and what government actors say, we can see that it is not just a budgetary problem. There is a desire to put less money towards this.”

Instead of investing in ending homelessness for people seeking protection, French authorities have cracked down on makeshift encampments erected to provide shelter for asylum seekers and migrants left on the streets. The often forceful expulsions by police have continued during the COVID-19 pandemic, leaving thousands of people without alternative shelter.

Between November 2019 and the end of October 2020, French authorities dismantled over 1,000 encampments and other informal living spaces, according to data collected by a coalition of NGOs. And dismantlements in the Paris metropolitan region appear to be happening more frequently in recent months as the number and size of encampments increases, according to advocates.

The issue briefly attracted international attention last November when police dispersed asylum seekers and migrants from an encampment housing around 3,000 people in northern Paris. The following week, police dumped people from tents and fired teargas as they dismantled a camp set up in the Place de la République – where Hussain used to sleep – to house hundreds of people left without shelter from the previous eviction.

At the end of March 2021, police again removed hundreds of people from an encampment in the Place de la République set up to protest the housing situation for asylum seekers and migrants in the country.

“[Authorities] have imposed a security policy against forcibly displaced people,” said Geneviève Colas, a member of the French National Consultative Commission on Human Rights (CNCDH), the national institution that monitors respect for human rights in the country.

A chronic lack of space

In theory, asylum seekers in France are eligible for housing as soon as they submit their application to the Office for the Protection of Refugees and Stateless Persons (OFPRA). But in reality there has been a chronic housing shortage for decades.

According to a 2014 report by the French National Assembly, in 2001, there were just 5,282 accommodation spaces for more than 47,000 first-time asylum applicants.

The number of people requesting protection in France has soared in recent years, from around 52,000 first-time applicants in 2011 to more than 138,000 in 2019. The following year, the onset of the pandemic led to a sharp dip in the number of asylum requests across Europe, but applications in France are expected to climb back to 2019 levels this year.

Meanwhile, there are now around 98,500 housing units available in the national reception system for asylum seekers. Of those, more than 46,000 are intended for people to stay for the duration of their asylum process – which can take up to 18 months for a decision and an additional three months in the event of an appeal.

After people receive refugee status or subsidiary protection, they are supposed to leave state-provided housing within three months, with the potential for a three-month extension if there are extenuating circumstances. But many people continue to stay even longer, often because of the difficulty of finding other housing, exacerbating the shortage of places for new applicants. The average post-decision stay currently stands at 258 days.

“They talk about being both humane and tough in migration policies, but these don’t go together,” said De Sa-Pallix. “You can't have both.”

The 2021 budget passed by the French National Assembly has funding for 4,500 additional places – far fewer than what is needed to make up for the current shortfall. “If there are more than 50,000 first-time applicants, then right off the bat there’s not going to be enough housing,” Pouly said.

In July 2017, shortly after taking office, Macron set a goal of housing all asylum seekers in France. “By the end of the year, I no longer want to see women and men in the streets or in the woods,” he said in a speech at a naturalisation ceremony in the town of Loiret, south of Paris.

Nearly four years later, advocates say the housing situation has only deteriorated during Macron’s presidency, in particular due to changes to the asylum system that have made it more difficult for people seeking protection to receive housing, money, and other resources while they await a decision. 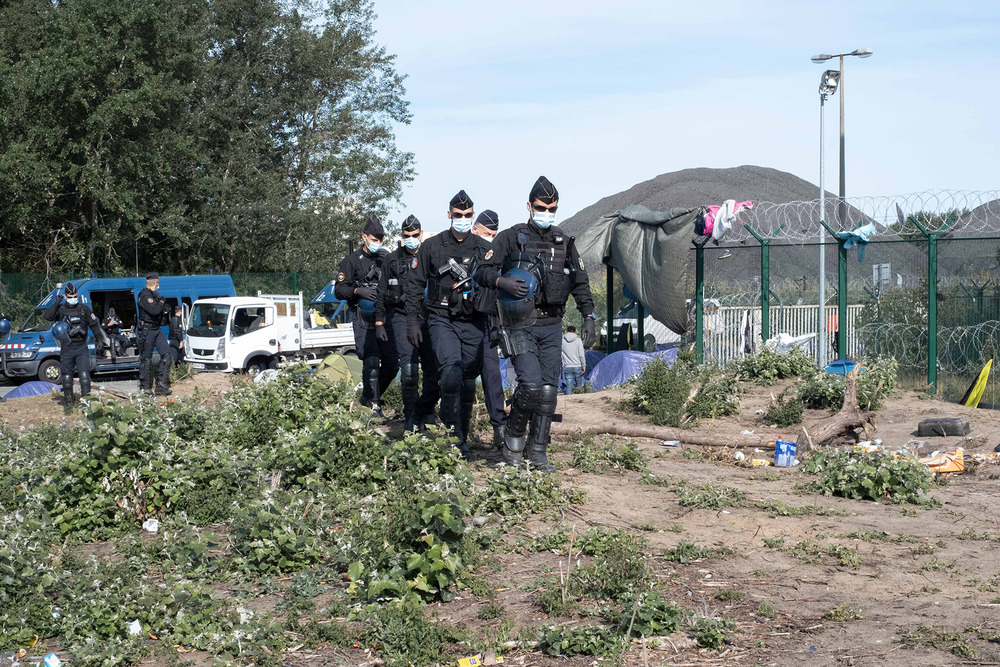 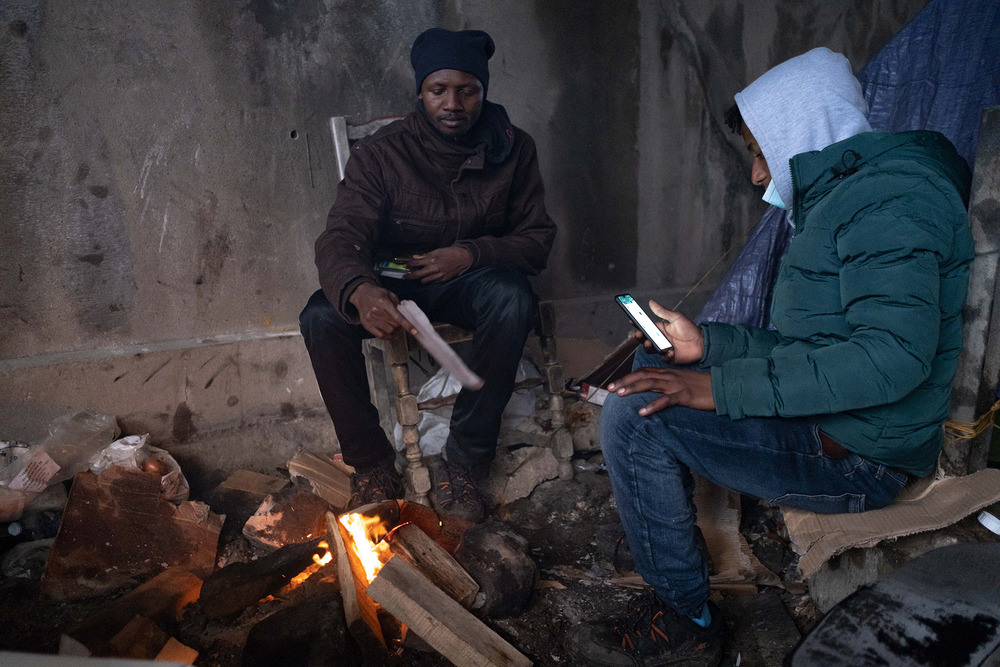 In Calais, the gendarmerie is tasked with dismantling camps every 48 hours, making it next to impossible for migrants and asylum seekers to settle there. Sudanese asylum seekers seek shelter under the train station bridge in Calais city centre. (Paloma Laudet/TNH)

“Successive [government] reforms concerning ‘the rights of foreigners’ (droit des étrangers, in French) have made it more difficult for people to access accommodation and [monthly monetary allowances] for asylum seekers because there are now more reasons that rights can be refused or suspended, and [the authorities] have set up a system that makes it more difficult to re-establish these rights,” said Nicolas De Sa-Pallix, a French asylum lawyer.

The reforms have also shortened the time asylum seekers have to submit an application after entering France from 120 to 90 days, and made changes to speed up the processing of claims that advocates say have loosened safeguards intended to ensure a fair process.

“They talk about being both humane and tough in migration policies, but these don’t go together,” said De Sa-Pallix. “You can't have both.”

Due to its harsh asylum policies and poor reception conditions, “France has become a country of last resort,” said Nikolaï Posner, a spokesperson for Utopia 56, a French NGO that provides support services to asylum seekers and migrants.

The movement of asylum seekers and migrants to northern France to attempt to cross the Channel to the United Kingdom, which has resulted in a years-long cycle of migrant camps being erected and demolished in the area around the port city of Calais, is evidence of the effects of these policies, according to Colas, the CNCDH rights monitor.

“It is true that the conditions in France make people want to leave,” Colas said. “The policies directed towards foreigners... incite people to leave. That is certain.”

For people who do apply for asylum in France, homelessness has stark consequences on their mental health and ability to rebuild their lives.

“I am no longer living with 40 people, many who were sick with COVID and other diseases. For the first time in years, I have my own space, and it is clean and quiet.”

“Homelessness has a direct impact on people’s psychological state,” Posner said. “When people are on the streets, they don’t have much morale, or dynamism to integrate, or even to participate in French society.”

Not having accommodation also has a negative impact on people’s ability to prepare for their asylum proceedings, according to De Sa-Pallix. “How can you arrive with a clear mind, ready to answer questions when you've slept outside?” he said.

“When we are unable to give many asylum seekers a roof over their heads, they have no anchors or opportunity to settle down,” De Sa-Pallix added. “These people have been on the move since they left their home country, and without anchors you can't have stability here.”

Hussain, the asylum seeker from Afghanistan who spent more than a year sleeping on the streets of Paris, finds it difficult to talk about the experience because it was so hard. When he finally did receive accommodation, “there was nothing there. And there is no help,” he said. “There was nothing to eat. Everything was expired. I was always sick. I was tired of life.”

Hussain received international protection in France more than two years ago and has a job. But it took him more than six years after arriving in Paris to be able to find a living situation conducive to allowing him to rebuild his life. Just last week, he moved into a studio apartment. It is a social housing apartment complex where rent is subsidised by the government, but he is finally living independently.

“I am no longer living with 40 people, many who were sick with COVID and other diseases. For the first time in years, I have my own space, and it is clean and quiet,” Hussain said.

It is a big step up from the parks and public squares where he spent his first year in the city. “I have two sides of windows, so there is a lot of light,” he added. “Life in France is still hard, still complicated, but I finally have my own place.”